Maternal platelets in missed abortion; from a clinical perspective

Objective: To assess the significance of platelet indices, mean platelet volume, and platelet distribution width in patients with missed abortion as an earlier and cost-benefit screening test.

Methods: The prospective case-control study was conducted at the University Hospital, Baghdad, Iraq, from April to September 2021, and comprised women with missed abortion as well as healthy controls. Anthropometric parameters were recorded alongside complete blood count, platelet count, mean platelet volume, and platelet distribution width were evaluated and compared between the two groups. Data was analysed using Medcalc 20.

Conclusions: Platelet distribution width was found to have the highest sensitivity in predicting missed abortion.

Abortion is defined as losing a foetus before 20 weeks of gestation.1 Missed abortions (MAs) continue to be a source of concern for gynaecologists and sub-fertile couples. MA refers to cases in which an embryo dies, but the body does not detect the pregnancy loss and continues to produce hormones. MA complicates 15% of all clinically diagnosed pregnancies.2

MA pathogenesis is multifactorial, with genetics, structural abnormalities, endocrine disorders and autoimmune diseases taking the blame. Many have speculated that defective implantation and poor endometrial receptivity are the causes.3 Pregnancy is termed a hypercoagulability condition because platelets in the circulation are inactivated during normal pregnancy. However, when endothelial wall damage or activation comes into touch with platelets, they become activated, and the risk of thrombosis rises.4,5 Many obstetric problems, including abortions, intrauterine foetal mortality, placental abruption, and pre-eclampsia, have been linked to endothelial damage and inflammatory hypothesis.6 The haematological system is critical to the completion of implantation and placental development. The longevity of pregnancy depends on the delicate balance of the foetus, placenta and mother circulation.7

Complete blood count (CBC) is an easy and affordable test. However, determining blood characteristics in MA cases may be needed before more sophisticated tests are performed.8 The platelets distribution width (PDW) shows the diversity in platelet width distribution. The mean platelets volume (MPV) is a precise measure of the platelet size. These indicators are disrupted in pathological conditions, such as inflammation, viral and bacterial infections.9 Earlier research on the usefulness of blood indices and platelets in the pathogenesis of MA yielded contradictory and inconsistent results.10,11 The current study was planned to examine the utility of platelet indices in women having MA.

The prospective case-control study was conducted at the University Hospital, Baghdad, Iraq, from April to September 2021. After approval from the institutional ethics review committee and informed consent from the study participants.

Sixty pregnants were enrolled into two groups; MA cases and healthy controls at 14 gestational weeks of a singleton pregnancy were enrolled. The controls were selected from the outpatient department (OPD) of the maternity unit, where the healthy pregnant women came for regular check-ups. Their demographic criteria were matched with the cases.

Cases of MA were defined as losing heartbeat in a pregnant woman before the 14th gestational week whose intrauterine foetal heart rate (FHR) had previously been confirmed. Also, women in whom FHR remained undetected after two weeks of re-scans were considered MA. The same sonographer did all the ultrasound scans.

Patients with a known history of chronic diseases, inflammatory and endocrine conditions were excluded. Also, we excluded smokers and cases with a history of surgery, trauma, uterine abnormalities, and usage of non-steroid anti-inflammatory drugs (NSAIDs) or anti-coagulants.

Demographic data, including age, parity, number of living children, abortions, height and weight, were documented for both groups.

Blood was sampled and analysed within two hours after being placed in ethylenediaminetetraacetic acid (EDTA) tubes. The blood samples were obtained immediately after diagnosis, and CBC was done using Cell-Dyn 3700 assays. Parameters obtained from blood included; haemoglobin (Hb), lymphocyte, neutrophilia, platelets count, MPV and PDW values were obtained for both groups. 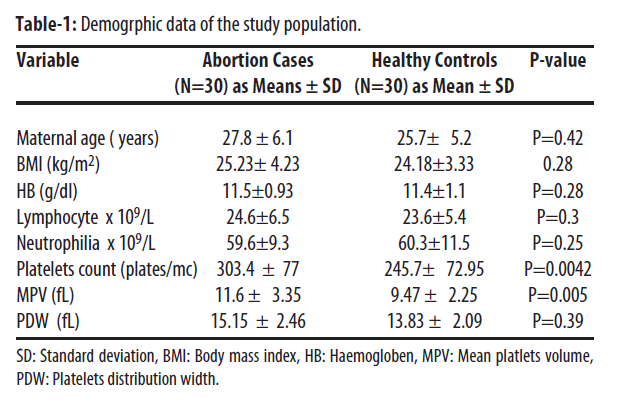 All platelets parameters were significantly high among the cases compared to the controls (P<0.05) (Table-2).

ROC curve estimated the cutoff value for platelets count, MPV and PDW, along with their respective sensitivity and specificity (Figure-1).

The current study illustrated a significantly higher platelet count and MPV among the cases compared to the controls. The subgroup analysis showed a significantly meaningful relationship between all the platelets indices and MA.

CBC and its components are diagnostic tests that are both useful and inexpensive. Platelets have recently been related to various physiological and pathological disorders involving immunity and inflammation. Their involvement in obstetrics has been examined as both predictive and diagnostic indicators.9,12

Biyik et al. investigated the usefulness of platelets indices in predicting MA in a retrospective study and reported higher PDW in MA cases compared to the healthy controls (P=0.04). MPV and lymphocyte values were low in the cases (P=0.044; P=0.025).13

Another study looked into the value of platelets during the first trimester of pregnancy. It recruited 500 participants divided into MA cases and healthy controls and found significantly higher PDW (P=.0007), among the cases. Conversely, the platelet counts and MPV values were substantially lower (P=0.008; P=0.001).14

MPV is a precise measurement of platelet reactivity functionality and the size of the platelets. Higher MPV levels are more reactive and result in higher levels of haemostatic pro thrombotic activity. Taken together, thrombophilia, hypercoagulability and poor perfusion of the placenta during pregnancy will eventually cause foetal loss.16 In agreement with this theory, Kosus et al. found slightly higher MPV in early pregnancy loss cases and identified MPV as a cause of increased thrombosis, which ultimately led to miscarriage.17

Kale I. et al. tested the value of platelets, neutrophil-lymphocyte ratio (NLR) and other blood indices in predicting pregnancy prognosis in cases of threatened abortion. The results showed no significant correlation of platelets indices with the abortion risk. However, the NLR was meaningfully higher and discriminated the cases that eventually aborted before 20 weeks with a 63% specificity and 64% sensitivity for NLR.18

Korniluk et al. investigated the impact of blood indices on the prognosis and outcome of in vitro fertilisation (IVF) cycles among couples with unexplained infertility. Results highlighted a positive correlation of platelets counts with fertilisation rate and embryo counts. Conversely, a negative correlation was found with MPV. Nevertheless, the study declared that none of the blood indices predicted IVF cycles' success or miscarriage rates.12 The current study's findings of elevated platelet indices in MA cases confirm the theory of inflammation among such cases.19

Exaggerated maternal systemic inflammation occurs as a result of faulty placentation and trophoblast damage early in the placentation.3,7 Since the embryo's implantation and anchoring depend on the synchronous interaction of the placenta and the endometrium, exaggerated inflammatory response will eventually lead to foetal loss.20,21

The ROC curve estimated the cutoff value in discriminating MA cases with platelets count, MPV and PDW. The highest sensitivity, 83.3 (P<0.001) was found for PDW at a cutoff value of 13.6fl. The increased PDW values show elevated endothelial injury and thrombosis hazard caused by defective placentation, a condition comparable to pre-eclampsia pathogenesis, confirmed by an earlier study.22

In terms of limitations, the current study did not calculate the sample size using a statistical method. This could have reduced the power of the study.

The single-centre nature of the study was its strength, as it allowed strict control of sampling and laboratory testing phases, which were a crucial factor behind many of the inconsistencies reported in earlier research.

The utility and availability of platelets indices and their significant correlation with MA can lead to new therapeutic approaches in pre-pregnancy counselling for MA cases and assisted reproduction.

Acknowledgement: We are grateful to Al-Mustansiriyiah University for support.