Bartholin gland carcinomas are rare types of tumours, accounting for less than 1% among females. This case report is of a 20-years patient in her 16th week of pregnancy who presented with pain and swelling in the left groin for two weeks. Examination showed a well-defined fixed swelling with induration in the left vulva, with an irregular margin and a diameter of about 5 cm, just at the Bartholin's gland site with two palpable ipsilateral lymph nodes. Bartholin's gland abscess was suspected. The decision was to drain the pus under general anaesthesia. During the procedure, a hard mass was felt at the left Bartholin glands region. The incision was extended, which unraveled a 5*5 cm abnormal-looking mass; it was hard and fixed to the adjacent tissues. Histopathology confirmed adenocarcinoma of Bartholin gland in stage III. The oncologist advised pregnancy termination and chemoradiation. Although surgical excision is essential for treating tumours, still, a multimodal approach can prove to be more effective.

Primary Bartholin's gland carcinoma (BGC), one of the vulvar cancers, is exceptionally uncommon, accounting for less than 5% of all vulvar carcinomas and less than 1% of female tumours. It was primarily reported in menopausal women, with an unclear etiology. Some associate it with infections of the vulval regions and Bartholin glands.1

BGC has a slow growth, an inconspicuous clinical picture and fewer pre-dominant symptoms, making the diagnosis a clinical challenge. BGC tends to invade the perineal area locally; moreover, it shows haematological spread and involvement in lymph nodes. Therefore, early diagnosis is crucial since most patients present late, owing to misdiagnosis and mismanagement.2 Delayed presentation is linked with poor prognosis and outcome, while early management has shown favourable results.1,2

Diagnosis and screening for patients with BGC rely on pathological analysis. Therefore, surgical treatment has a fundamental role alongside adjuvant chemotherapy or radiotherapy, depending on the stage of the malignancy.3

BGC diagnostic criteria are (1) tumour encompassing the Bartholin gland region being histologically consistent with the origin of Bartholin gland; (2) parts of the apparent transition from healthy to neoplastic components observed in histologic analysis, and (3) no indication of a primary tumour elsewhere.4

Different histological types of BGCs constitute keratosis glands, adenoid cystic, adenocarcinoma, and undifferentiated carcinomas. Among these carcinomas, squamous and adenocarcinoma are the commonest kinds of malignancies.1 The present case study describes the clinical presentation, course of management, and confirmation of the diagnosis by histological examination. Furthermore, this case highlights the significance of early diagnosis of BGCs which lead to early treatment of the patients.

A 20 years old pregnant woman (G2P1A0 ) with a gestational age of 16 weeks was referred to the outpatient clinic of Al-Amerat hospital, Baghdad /Iraq, on 5th April 2021 with the complaint of painful swelling in the groin in the region of posterior labia minora for the last few days. She gave a history of a large mass in the left labia minora four months earlier associated with a gradual increase of the vulvar size. The pain was severe enough to prevent the patient from performing personal tasks.

On examination, the patient was vitally stable and afebrile. Obstetrical examination revealed a gravid uterus of 16 weeks with positive foetal heart sounds. Two palpable firm lymph nodes of 2cm in the left inguinal and femoral region were confirmed.

Pelvic examination showed a well-defined indurative swelling in the left vulva region. It was fixed, with irregular margins, of about 5 cm over the left posterior labia majora, just at the site of Bartholin's gland. The cervix, mucosa and skin were intact. No pus discharge nor bleeding was seen. Bartholin gland abscess was suspected as a provisional diagnosis. The decision was to drain the pus under general anaesthesia by marsupialization on the same day.

We examined the left side of the vulva; it was swollen, having the size of about 7 cm. The marsupialization draining of the purulent fluid was attempted. However, a hard mass was felt at the region of the left Bartholin gland. The incision was extended, and a 5 cm abnormal-looking mass was found. The mass was hard and fixed to the adjacent tissue. The mass was fully excised, and the specimen was sent for histopathological examination. On examination after a week, the incision had healed well (Figure-1). 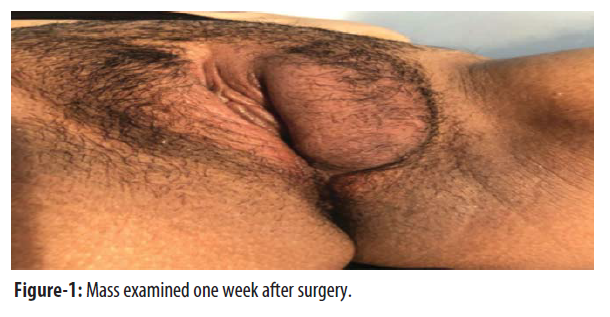 The histopathological analysis revealed adenocarcinoma of Bartholin gland, stage III, with unclear margins (Figure-2). The patient was referred to an oncologist, who recommended termination of the pregnancy and chemoradiation. The patient's consent for publishing her case was obtained. 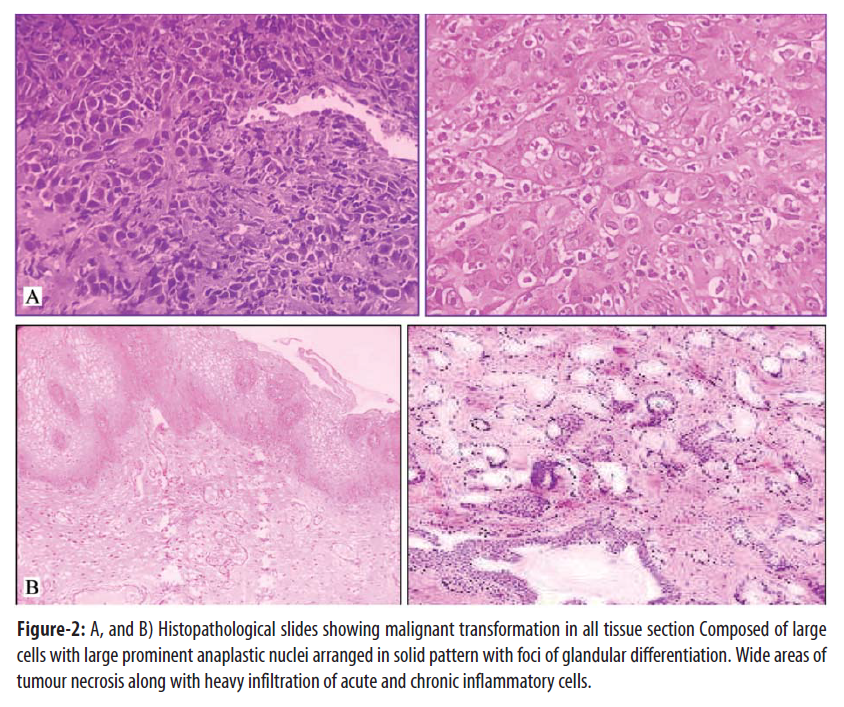 The case of a BGC in a young pregnant woman with unilateral involvement of the LN and local invasion is presented. The patient came in rather late, just as in most BGC cases which leads to local invasion.2

Unilateral BGCs are amongst the common types of BGCs compared with bilateral tumours. The lungs and bones are the most common areas of distant metastasis.2 Our case had chemoradiation as an adjuvant therapy to the primary surgical treatment.

Bhalwal et al. reviewed published BGC cases5 compared to vulvar tumours and found that frequently seen BGC types are adenocarcinoma and squamous cell carcinoma. Primary BGC were seen in a younger age group at diagnosis (median, 57 vs 64 years; P = 0.04). In addition, affected cases were at a more advanced stage III/IV disease (60.7 per cent vs 35.7%; P = 0.008), indicating that they were more likely to require adjuvant radiotherapy (78.83% vs 43.95 per cent; P=0.001).

The majority of patients with BGC appear to be benign. Burning sensation and discomfort, a palpable lump, and swelling are the most typical presenting symptoms. However, because of the overlap of these symptoms with benign diseases such as Bartholin abscess, up to half of the patients may have an incorrect or delayed diagnosis.3,6 Cancers of the Bartholin's gland are seen in elderly or postmenopausal women. However, Adenoid cystic BCG is evenly distributed from the mid-twenties to the late twenties. Nearly all Adenoid cystic neoplasia variants were multiparous reported during or immediately after pregnancy, suggesting an association to increasing age or parity.7

Although preoperative imaging appears reasonable in vulvar tumours, no studies have been conducted assessing preoperative imaging in primary BGCs. Conversely, treatment modalities for BGC are derived from previous vulvar cancer experience; the appropriate treatment is yet to be determined.8 Surgical treatment, with or without dissecting lymph nodes, is used and proved to be effective in decreasing morbidity, protecting genital functions, and improving patients' chances of survival.5 Adjuvant chemoradiation treatment is commonly used to reduce local recurrence, which is estimated to be 30%. The risk of local recurrence for BGC, especially when positive margins are reported, calls for annual surveillance by radiological scanning.9

Introducing prompt treatment enhances the patient's overall survival period from 5-10 years. Furthermore, our patient did not have metastatic lesions at the initial diagnosis, so the tumour could be eradicated by cancer surgery, thereby enhancing radiotherapy efficiency.2

This case is unique in more than one way. First, it represents the youngest case ever reported; earlier reports were for 25 years or older. Second, an association was found similar to adenoid cystic carcinoma of the Bartholin's gland reported with pregnancy or after it, compared to documented cases of BGC seen in 50-60 years old women.9,10

Careful clinical examination and meticulous attention to the intraoperative finding can unravel hidden malignancies, which was presented as a benign case of Bartholin abscess. Even in very young people, carcinoma cannot be ruled out, so a biopsy is recommended, which is risk-free. An early diagnosis along with multimodality treatment, lymph node sampling and radiotherapy for local recurrence prophylaxis can alleviate the distance metastasis to improve disease-free intervals.

Biopsy of vulvar masses is recommended, even for the younger age group, unless the lump is a confirmed Bartholin's abscess. A high index of suspicion can enhance the detection of this rare-high locally invasive tumour. This was observed in the presented case of a 20 years old female with 16 weeks pregnancy. Histopathology gave the diagnosis of adenocarcinoma of Bartholin gland in stage III. Pregnancy was terminated and chemoradiation instituted.

Acknowledgement: The continuous support of Al Mustansiriyiah University is acknowledged.