The value of neutrophils/lymphocyte ratio in predicting foetuses that need urgent delivery in post-term pregnancies: A prospective study

Objective: To verify the performance of neutrophils ratio to the natural logarithm of lymphocyte ratio in detecting foetuses requiring urgent delivery in post-term pregnancies.

Results: There were 74 post-term pregnant women with a mean age of 28.95±6.71 years and the mean foetal age at delivery was 287.38±3.72 days. Of the total, 49(66.22%) women were delivered >10 days post-term, while 25(33.78%) were delivered urgently <10 days post-term because of regression in their biophysical profile score and foetal compromise. The neutrophils ratio to the natural logarithm of lymphocyte ratio showed significant correlation with biophysical profile and amniotic fluid index scores (p<0.05). The ratio cut-off value was found to be >21.6 associated with highest sensitivity and specificity of 81% and 87.5% respectively. Area under the curve was 0.89 (p<0.001).

Post-date pregnancy continues after 40 weeks of gestation in women with a regular cycle.1 The decrease in its incidence was attributed to early pregnancy dating scans to reach 5.5%. Post-date pregnancies are associated with increased foetal hypoxia and placental insufficiency. Therefore, recognition and follow-up of post-term pregnancies optimise obstetrical and perinatal outcomes.2 Doppler ultrasonography is the primary tool for screening and recognising hypoxic foetuses, which is crucial in a post-term pregnancy.3 Biophysical profile (BPP), resistance index (RI), pulsatility index (PI) and the amniotic fluid index (AFI) are essential tools in the follow-up phase. Still, the performance of Doppler parameters in predicting poor perinatal outcome and adverse intrapartum accidents is poor.4 The haematological system plays a vital role in the placental system's integrity and health, linking the foetus, the placenta and the maternal circulation.5 Various post-term period changes result in declining nutrients and oxygen transport for foetuses in utero.6 Neutrophil-lymphocyte ratio (NLR) serves as a strong index of an acute inflammatory state. It is used as a diagnostic and prognostic marker in cardiovascular accidents and myocardial infarction.7,8 Recent evidence supports the use of blood indices as a valuable biomarker in obstetrics and gynaecology. Human parturition was accredited to an inflammatory process. Studies confirmed increased neutrophils and decreased lymphocytes as the pregnancy progresses, explaining the increase in NLR by increasing gestation weeks.8,9

Nevertheless, the interpretation of the NLR in foetal hypoxia remained unclear. The current study was planned to examine whether neutrophilia's ratio to the natural logarithm of lymphocyte ratio can distinguish compromised foetuses needing urgent delivery in post-term pregnancies when compared with BPP and AFI.

The prospective observational study was conducted from June 2019 to March 2020, at the University Teaching Hospital, Baghdad, Iraq, which is a tertiary care centre with over 700 deliveries taking place per month. After approval from the institutional ethics review committee, post-term women at a gestational age of 40-41+3 days were recruited. They were chosen according to accurate last menstrual period and/or early first-trimester pregnancy to confirm their post-term state. All participants were low-risk singleton pregnancies void of any other high-risk situation apart from post-term state. Women with uncertain dates or irregular cycles, twin pregnancy, foetal malformation, maternal medical diseases, such as pre-eclampsia, diabetes and thyroid disease, liver or renal diseases, blood dyscrasia, and connective tissue disease were excluded. Pregnant women taking steroids or aspirin under medical prescription were also excluded.

After taking informed consent from the participants, a detailed history was taken, followed by general and obstetrical exam. Maternal age and gestational age were recorded at the time of the delivery.

AFI and BPP were assessed at the time of ultrasound assessment by the same experienced radiologist at the labour ward via an abdominal approach. A blood sample was taken for complete blood count (CBC) to evaluate the total and differential number of neutrophil and lymphocyte counts. From their count, the following ratio was calculated:

This ratio is referred to as N/ln(L) ratio.

The rationale behind taking the logarithm of Neut Count / ln (Lymph count) is to increase the range or variance of this ratio, making it more predictive of the complications associated with post-term pregnancy.

The rationale behind taking the natural logarithm of lymphocyte counts, not just the lymphocyte, is that; for any ratio in the maths field, when the numerator (divider) or (N count) increases or the denominator (divided by) (L count) decreases, the outcome of the ratio range or variance will increase. This increase in the ratio in this study is done by decreasing the denominator by taking the natural logarithm of the numerator. Consequently, the ratio will have better performance in statistical terms. And will increase the sensitivity and specificity, which the ROC curve can calculate. Thus, making it more predictive for the complications associated with post-term pregnancy.

Participants who fulfilled our criteria were examined by Doppler study assessing BBP and AFI alongside haematological testing for N/ln(L) ratio, which was done on the same day. Those patients with BBP of 4 and below were terminated immediately according to the senior on-call's decision.

Pregnant women who scored BBP of 6, the testing was repeated every 24 hours. As for those with 8-10 BBP scores, they were allowed to continue up to 290 days (41+3 weeks) provided that foetal movement was checked by kick count test and non-stress test. Termination was done to cases suffering from decreased foetal movement, deterioration of BPP or those who completed 41+3 weeks.

Data was stored in Excel sheets for further statistical analysis. Data normality was checked by Shapiro-Wilks test. Continuous data was presented as means ± standard deviations. Correlation was assessed between AFI at 40+3 weeks as a dependent variable and the ratio as an independent variable by linear regression. One-way analysis of variance (ANOVA) was conducted between the N/ln(L) ratio and BPP. Receiver operating characteristic (ROC) curve was generated for foetuses delivered between 41 weeks + 3 days versus those delivered after ten days to calculate the cut-off value for the ratio associated with the highest sensitivity and specificity. All the test was conducted by Medcalic software version 20. The level of significance was set at p<0.05. 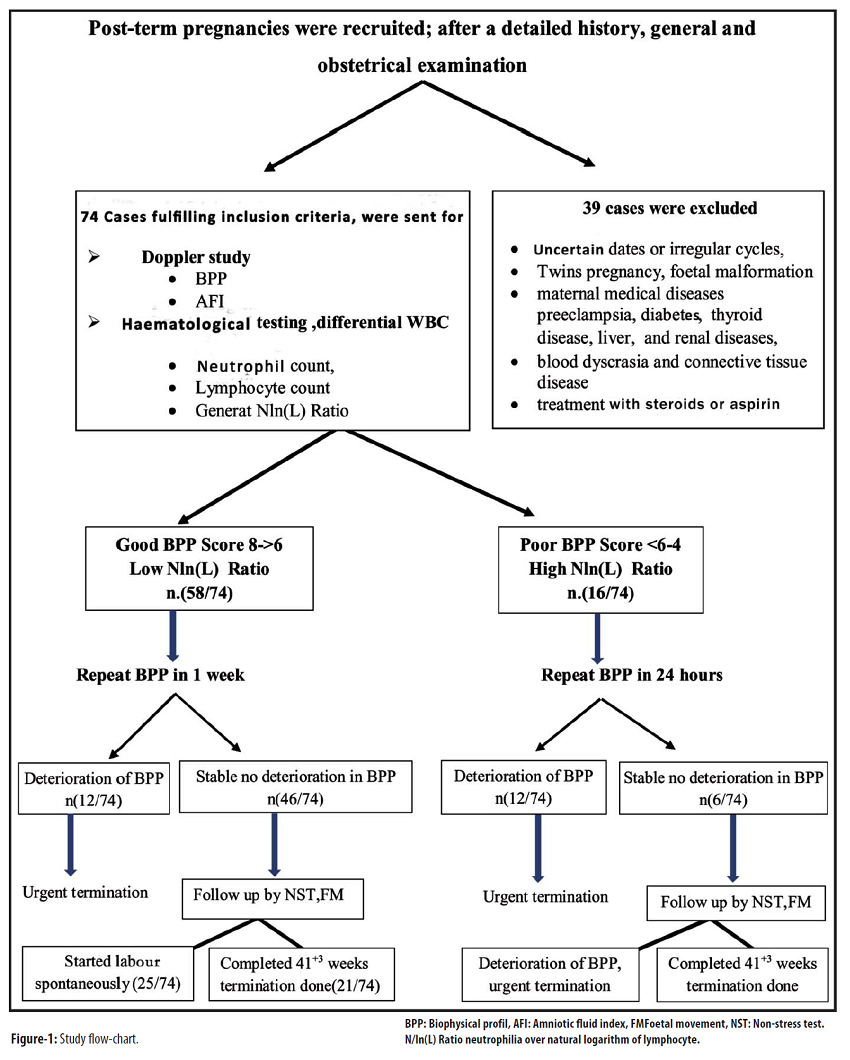 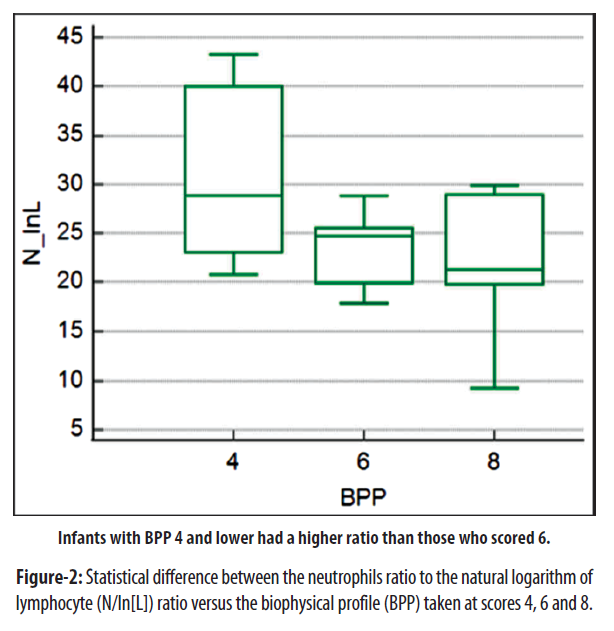 The ROC curve estimated the N/ln(L) ratio cut-off value to be 21.6 associated with the highest sensitivity (81.2%) and specificity (87.5%) for foetuses that continued for 10 days post-term 41+3 weeks versus those who needed urgent termination (Figure-3). 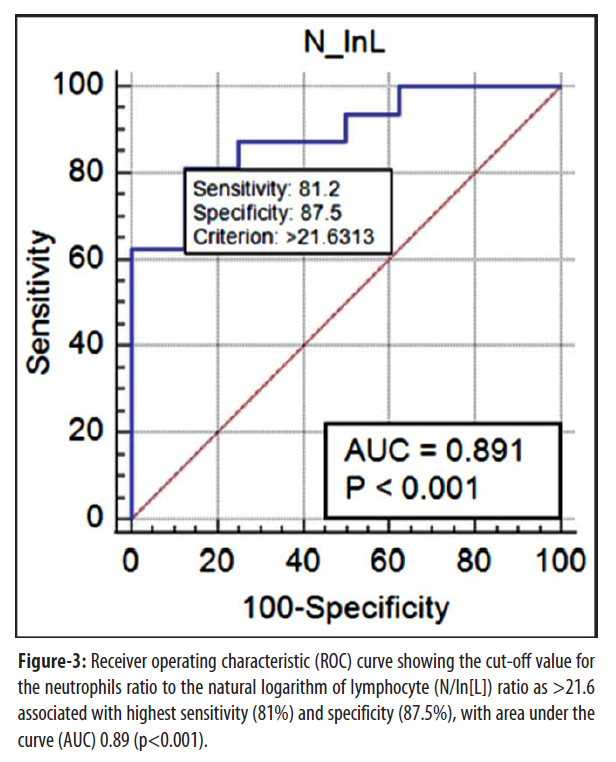 Recently, research on NLR has surged because of its critical value as a marker and prognostic factor. As for obstetrics, NLR was significantly higher among those experiencing ominous pregnancy outcomes as premature rupture of membranes, preterm labour, gestational diabetes and chorioamnionitis.10,11

Pre-eclampsia (PE) is an important cause of maternal and foetal morbidity with unclear eitiopathology.14 The NLR scored high in PE cases than healthy controls and was meaningfully higher in PE women than women with gestational hypertension.15,16 Conversely, the NLR showed no statistical difference in the discrimination of mild and severe pre-eclampsia.17

No earlier study linked NLR with foetal hypoxia in post-term pregnancies which can underlie the defective placenta oxygenation seen in post-term phase, resembling the underlying pathology in pre-eclampsia. The placenta is regarded as a "diary of pregnancy", and placental hypoxia induces an inflammatory state by releasing pro-inflammatory cytokine and anti-angiogenic markers.18-20

Neutrophils are key players in the inflammatory process. As they pass through the compromised placenta, they get activated by exposure to placental oxidising markers. Activated neutrophils reach the maternal vascular tissue and start systemic maternal vascular inflammation, manifested as disturbed NLR.14,21,22

In line with the current study, Biyik et al. recommended NLR as a tool to speculate early placentation defects.23 They investigated the role of NLR in the first trimester of missed abortion by comparing the haematological property of missed abortion cases versus matched controls. Results showed a significantly high NLR, PLR among the missed abortion group.

The strength of the current study is its prospective nature. Besides, both the patients and the physicians were blind to the N/ln (L) ratio results. Therefore, there was no interference in case management. All the parameters used in the study have already been validated as markers of poor pregnancy outcomes.8-11

The current study also has limitations, as it lacks analysis power since no sample size was calculated. Studies with adequate sampling are recommended.

The N/ln(L) ratio showed a strong correlation with BPP and AFI. It discriminated post-term pregnancy needing urgent termination for foetal sake, supporting its role as a marker of foetal hypoxia. NLR is a potential marker for broader foetal surveillance.

Acknowledgement: We are grateful to Al-Mustansiriyiah University for support.