Osteochondroma : the local effects and the management

Osteochondroma is a common benign bone tumour, presenting as a single or multiple lesions, pedunculated or sessile type, mainly in 1st-2nd decades and mostly in males. The presented case series, studied the local effect of (osteochondroma) at the end of long bones with best line of treatment (RQ). Eighteen patients with osteochondromas, with an age range of 9- 45 years, mean age 19.6 ± 11.147 years, were seen from October 2016 to November 2018. There were 8 cases with painful lesion due to (mechanical interaction) or (pressure on near by neurovascular bundle), or from (inflamed bursa). Four cases were asymptomatic, 3 cases had Growth disturbances of the fellow bone, 3 cases presented with neurological symptoms and one case had vascular complications. Osteochondromas may present with different types of local effects on its surrounding tissues. Surgical excision is the best line of treatment.

Osteochondromas (exostosis) is considered a common benign osseous neoplasm (10 to 15% of all osseous neoplasms). These are non-malignant tumors arising as a herniation from unusual cartilaginous epiphyseal growth-plate tissue that spreads and grows away from the original bone by endochondral ossification. It could occur either as a single or as multiple lesions. The frequency is about 50% of all benign bone tumours. The most common site for Osteochondromas are at the end of the long fast growing bone, as the end of lower femur or upper tibia, (knee). It usually consists of a cortical part & a medullary part, which merge with the original bone with a cap of hyaline cartilaginous tissue, covering the distal end of the tumors. It could be seen at any age, with the prevalence age (10 to 30 years). The male gender is predominant (male-to-female ratio, 3:1). It is either a single solitary lesion or multiple lesions are seen. The tumors is known as Diaphysesal Aclasis.1-3 The more common pedunculated stalk type presents with a thin base while the wide broad based lesion is known as the sessile type.4,5 It is usually affected by different hormones and growth factors which influence epiphyseal growth plates. It continues to grow until skeletally mature with the original bone and once the growth plates fuse.6-8 From the genetic point of view, multiple lesions are found to be associated with a dominant autosomal alteration between chromosome 15,16 that is transmitted in both sexes, whereas in the solitary tumour group, most of the individuals have a positive family history and/or mutation in one of the EXT genes. These genes (EXT1, EXT2 and EXT3) are found in Chromosomes 8, 11and 19 respectively. This is seen in seven out of eight solitary osteochondromas, homozygous deletions where EXT1 are found.9-12 The chances of malignant transformation are extremely rare and account for 1% of the cases. The features suggesting a malignant change are, enlargement of the cartilage cap in successive examinations, a bulky cartilage cap (more than 1 cm in thickness), irregularly scattered flecks of calcification within the cartilage cap, spread into the surrounding soft tissues.

Clinical presentation for this lesion is as follow Patients may complain from generalized pain, with some bone shortening and deformity associated with limitation of joint range of movement.13 Examples of this are the deformity of the forearm (due to shortening & angulation of the ulna), or (shortening & angulation of the upper or lower part of the tibiofibular-joint ) leading to inequality of the lengths of the lower limbs plus angulation (Varus or valgus) deformity of the knee. Other possible complications of these lesions are as follows.14,15

1. Fractures (generally of pedunculated exostoses, at their base).

3. Neurological complications (compression of peripheral nerves, which involves the spine or the perarticular regions).

4. Formation of a bursa due to local friction of the surrounding soft tissue with the outer surface of the lesion.

A Case Series of 18 patients,12 male and 6 females with osteochondromas were studied Patients ages ranged between 9 and 45 years with a mean age of 19.6 ±11.147 years. Twelve patients had a solitary lesion whereas 6 had multiple lesions. All patients completed their follow up of at least 6 months.

The Inclusion criteria were, Osteochondromas in the limbs diagnosed before or after puberty, single or multiple tumours and a follow up of 6 months.

Full history about the condition, general and local examination, radiological assessment Plain radiograph of the site of lesion (with or without CT scan or MRI) were done to confirm the diagnosis in certain cases and laboratory investigations were done for all patients. The site of the surgery was marked, full consent of the family documented after providing complete information about the risk of surgery and possible complications. Intra-operatively, a prophylactic intravenous antibiotic dose was given 30 minutes before the skin incision. General anaesthesia was used for all patients. Pneumatic or rubber tourniquet was applied, the already marked site of surgery was well sterilized and draped. A suitable surgical approach was selected for every individual case. The tissue planes were dissected and the osteochondroma was excised by a sharp osteotom and hammer. Good homeostasis was acquired, surgical wound irrigated by physiological saline, Redivac drain inserted, the wound closed and site of surgery well dressed. Excised lesion was sent as a biopsy for histopathological study, Post-operatively, patient was given a suitable dose of analgesics and antibiotics and put under close observation. On the next day, Redivac drain was removed and without exposure of surgical dressing and the patient discharged from the hospital on antibiotics and analgesics.

Patients were enrolled in monthly follow up regimen to document any possible complications for at least 3 -6 months.

This study had 12 males and 6 females with a ratio of 3:1. Patients ages ranged from (9-45 years) with a mean of 19.6 ±11.147 years. Twelve cases presented with a single lesion (single exostosis) whereas 6 cases had multiple lesions (diaphesyal aclasis or multiple exostosis). 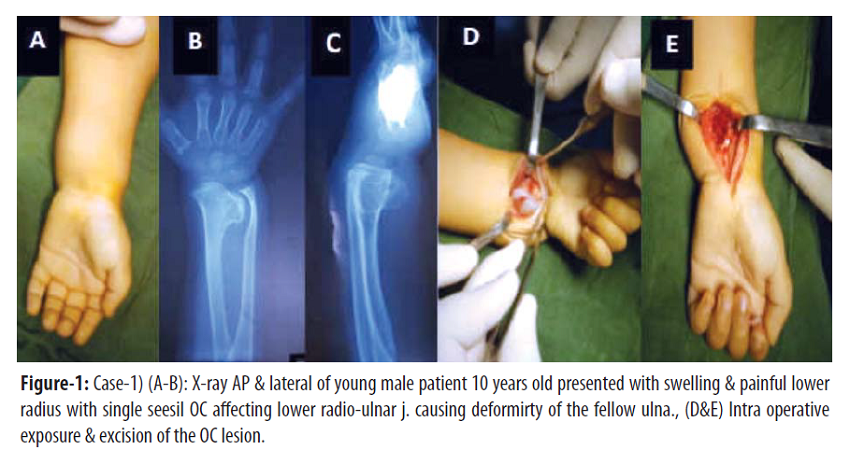 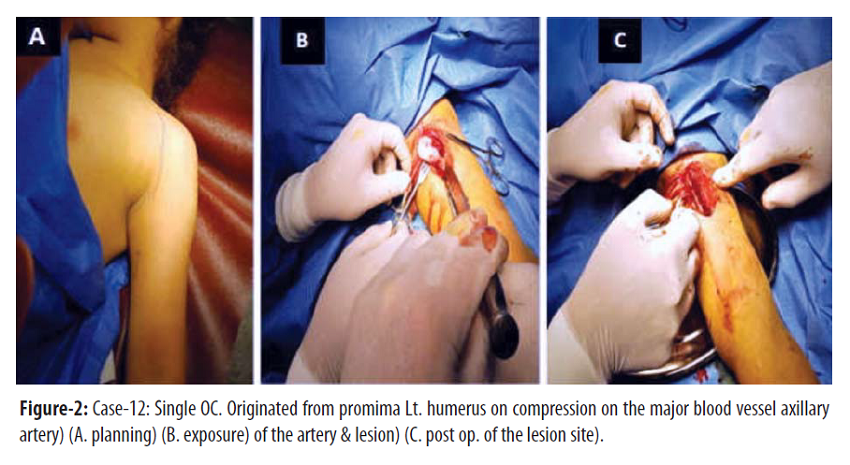 Eight cases presented with a painful lesion, due to mechanical interaction between the projected hard tissue (bone) with a surrounding soft tissue as muscles, fibres or tendons. Pain could be mild due to simple contact secondary to compression or friction. It could be from moderate to severe in nature due to snapping of a muscle tendon over the hard projection of the tumour, or it could be due to inflamed bursa formation over the projected exostosis in the case of chronic lesions. 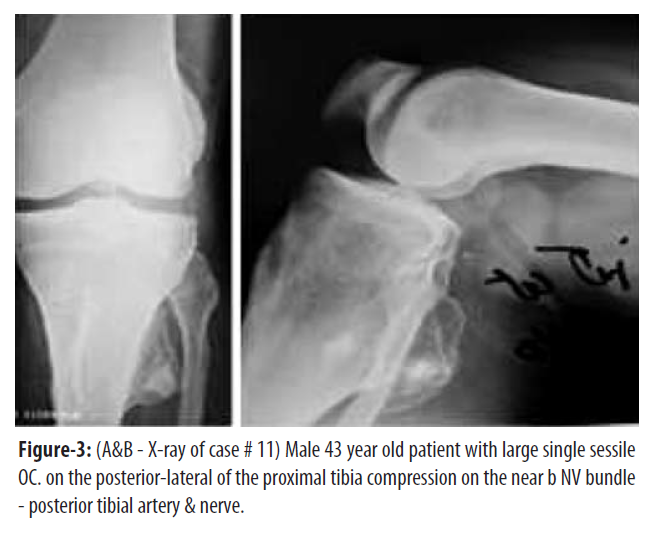 There were 3 cases with a huge mass of a solitary sessile type osteochondroma (case # 3 ,11 ,12) causing pressure on near by neurovascular bundle. In one case (case # 3) the location was at the proximal postero-medial aspect of femur and the 2nd and 3rd (case # 11,12) the tumour was at the postero lateral aspect of proximal tibia. Both of these lesions were affecting a major neuro-vascular bundle (femoral tibial) respectively and the patients presented with severe local pressure pain and different degrees of paresis and paranaesthesia, depending on the anatomical site and the nerve involved by the exostosis.

Four cases had an asymptomatic swelling with cosmetic deformities and limitation in the range of movement at the related joint. They were accidently diagnosed due to a slow growing painless projecting lesion with a hard consistency. 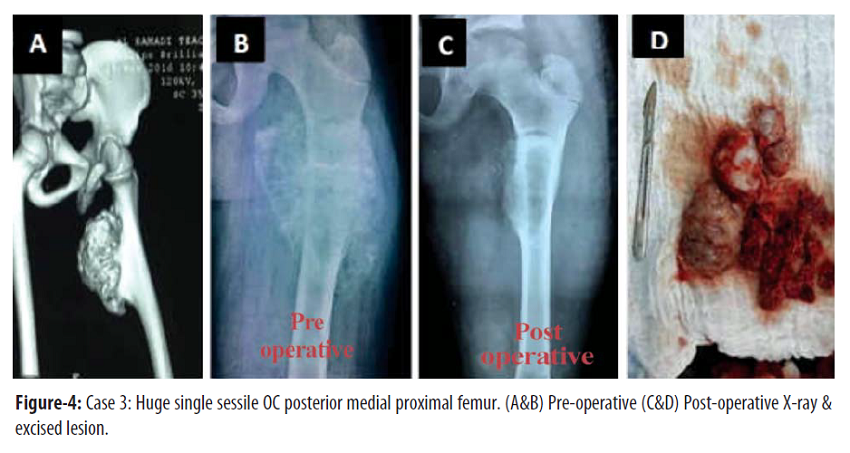 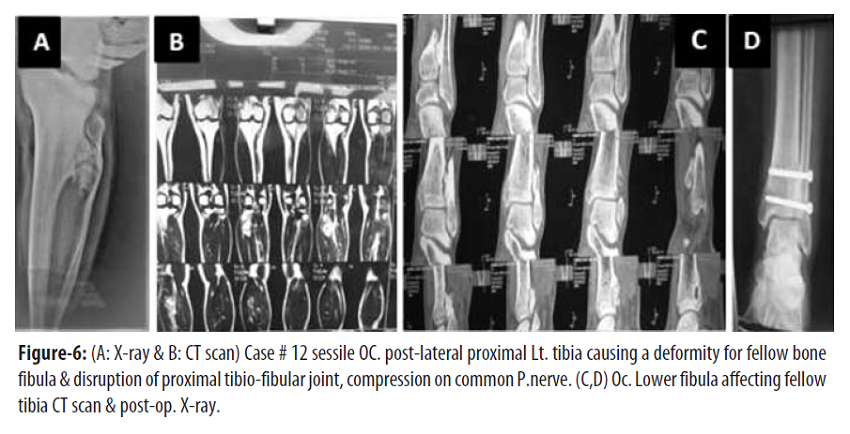 Three cases (cases 1,9 and 12) presented with local effect of growth disturbances related to a neighbouring bone (Figure-1 and Figure-6).

One case (Case 12) presented with compression on a major blood vessel the brachial artery (Figure-2).

The details of the patients data included in this series are described in Table-1.

Osteochondroma (exostosis) is considered a common benign osseous neoplasm. Solitary osteochondroma may present as an asymptomatic lesion, discovered accidentally as they are slow growing painless projectory lesions with a hard consistency.15 Symptoms are present depending on the size and location of the exostosis. The most frequent symptoms in this study were pain (8 cases - 44.4%) & symptomatic swelling in 4 cases (22.2%). Pain was present in different degree of severity from simple contact and friction with the soft tissues, muscle fibers and tendons in the surrounding area as described by Bottner et al.16 Pain can be severe due to an inflamed bursa formation over the cartilage at the top of the lesion In this study there were 2(11.1%) cases with Bursitis. This was also encountered by Griffiths HJ et al17 in patients with pedunculated exostosis stalk fracture secondary to trauma. This was not seen in this study.

Another local complication encountered in our study was neuro-vascular bundle injury in 3 (16.6 %) cases due to compression by the huge sized exostosis. This was seen in the chronic neglected cases who presented with different degrees of paresis, paresthesia, oedema, cracking, redness or pallor which depended on the anatomical site and structure and influenced by the exostosis. The main structures involved were the common peroneal nerve and compression on posterior tibial nerve and artery and sciatic nerve. This was also confirmed in studies by other researchers18-20 on the local effect of solitary exostosis on peroneal nerve proved by electromyogram and nerve conduction.

Another important local effect was encountered in skeletally immature patients specially on the distal part of the limb when the exostosis caused obvious complications as bowing deformity and bone shortening in an adjacent fellow bone. This was seen in 3(16.6%) cases as pain, bone shortening and bowing deformity associated with limitation of movement of joint range with an obvious deformity of the forearm (due to shortening and angulation of the ulna), or (shortening and angulation of the upper or lower part of the tibiofibular-joint) leading to inequality of the length of the lower limbs with angulation without (varus or valgus) deformity of the knee. This was also confirmed by other studies, where the authors studied the deformity in near by fellow bone from an emerging exostosis close to it. If the lesion continued growing after skeletal maturity or rapidly increased in size with increasing local pain it gave the suspicion of malignant transformation in both solitary and multiple types of the tumours.21,22 This accounts for approximately 1% of solitary osteochondroma cases and a high frequency in multiple osteochondromas. No such local effect was found in our study. The last local effect seen in our study was compression of a major blood vessel in one case were a pedunculated sessile growth from the proximal humerus situated antero- medially was compressing the axillary artery at its course in the upper arm of a young female child (Figure-2). This was explored and the axillary artery was dissected and retracted from the operation field so that the exostosis excised by a Chisel and osteotome. Fortunately the artery was not injured and the harm was caused by the compression of the exostosis was removed safely. This effect was also reported by Wang D, DeRubertis BG, Marc-Antoine Vasseur, and Oliver Fabre23,24 who studied the vascular complications of osteochondroma on different major blood vessels. The main line of treatment was by local excision surgically, with rare incidences of recurrences.

A large percentage of the lesions present as a symptomatic painless swelling slowly growing ,others may present with different local effect as:

1. Pain from the compression or friction on surrounding muscles tendons, neuro vascular bundle and bursa formation.

2. deformity of a fellow bone from a protruded osteochondroma, bowing, disturbance of growth and shortening.

3. different neurological signs and symptoms due to compression of a near by nerve.

4. Vascular complication by compression mass of ostochondroma on a major blood vessel.

Main line of treatment is by local excision surgically, with rare incidence of recurrences.

Maternal and perinatal outcome of pregnant women with COVID 19, a tertiary centre experience in Iraq — A Case Series