Acute sinusitis is a frequent medical condition that can affect any age group and may lead infrequently to very serious life-threatening complications. These complications include the spread of infection to frontal and other cranial bones, meninges, and other intracranial structures that require urgent medical actions to prevent mortality and morbidity. We report the case of acute frontal sinusitis in a 14 years old male who presented with fever, severe headache, and fluctuant swelling of the nasal root, and right supraorbital and frontoparietal regions. Imaging studies demonstrated signs of left-sided sinusitis, osteomyelitis of the frontal bones, and right parietal bone. Urgent surgery was performed with drainage of the abscesses and samples were sent for culture and sensitivity. Bilateral antral washout and trephination of the left frontal sinus was performed and pus was evacuated. Growth of Staphylococcus aureus and Peptostreptococcus micros was reported and according to the sensitivity report, the patient was kept on intravenous meropenem, 1500 mg per day and vancomycin 1500 mg per day was added on the 7th postoperative day. The patient was discharged from the hospital in good health on the 25th postoperative day and kept on oral vancomycin for one month.

Pott's puffy tumour is defined as a frontal skull bone osteomyelitis with associated subperiosteal abscess.1 In very rare instances, other skull bones and other extracranial regions may be involved.1 Osteomyelitis is an inflammation of the bone which involves the medullary cavity and then the periosteum of the infected bone; osteomyelitis of the bones of the head and neck is rare and should be managed by special methods compared to the bones of the other parts of the body due to the nature of the bones, complex anatomy of the region, and aesthetic concerns.2 Despite the widespread use of antibiotics and decreased incidence of osteomyelitis; involvement of the cranial bones remains infrequently a problem that may be encountered during clinical practice. Osteomyelitis of the parietal bone can be a very rare complication of sinusitis.1 On the other hand, subgaleal abscess is a collection of pus between the pericranium and galea or pericranial aponeurosis. It may also complicate acute sinusitis but it is very rare.3 The usual causes are scalp lacerations, wound infection following neurosurgery, a complication of subgaleal haematoma, contamination with electrode insertion on the cranium, or haematogenous diffusion from any skin lesion.4

This case study represents a very rare complication of Pott's puffy tumour of the frontal bones and right parietal bone with subgaleal abscess which lead to the predominant bulging of the forehead on the right side in a healthy adolescent patient with acute left-sided sinusitis.

A rare case of a 14 years old male is presented. The patient was referred from an internal medicine private clinic to our otolaryngology department in Al-Yarmouk Teaching Hospital - Baghdad IRAQ complaining of headache for 2 weeks following an attack of upper respiratory tract infection. He developed a right-sided fluctuant frontal swelling that was extending to the right parietal area of the scalp associated with high fever for the last 2 days. (Figure-1). 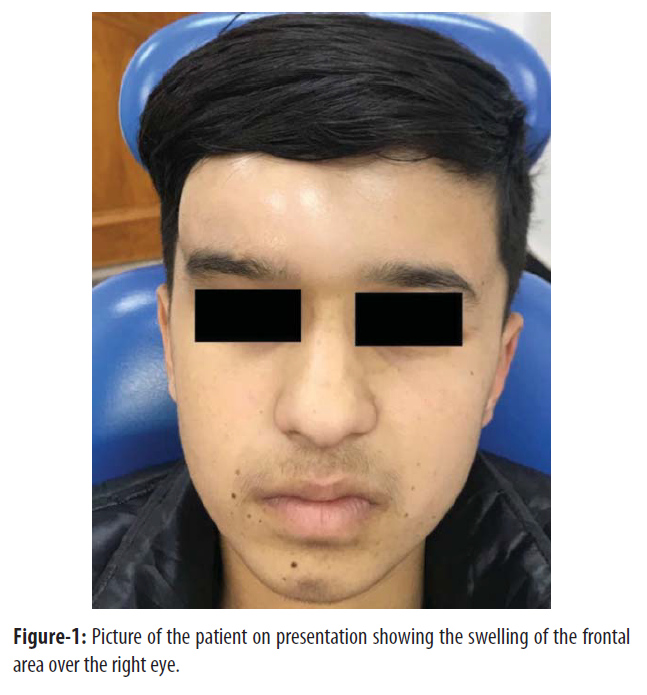 There was no history of Diabetes Mellitus or any other debilitating or immune-compromising disease. He did not report of recent head trauma or injury. Close examination revealed normal consciousness, fever with temperature 39.6°C and a small localized swelling in the left parietal area. ENT examination showed no significant finding in anterior rhinoscopy, otoscopy of both left and right ears as well as the oropharyngeal examination. There was no neck stiffness or any focal neurological sign with normal eye movements. Rigid endoscopy of the nose revealed pus from the Left middle meatus. Complete blood count showed leukocytosis with elevated neutrophil count and anaemia; C reactive protein was 75 mg/dL. Immediately the patient was admitted to the hospital and kept on the same parenteral antibiotic that was started by the internist physician (ceftriaxone 1 gm IM daily), the nasal decongesting spray was added to the antibiotic, and the patient prepared for urgent surgery on the next day. He was sent for CT scan and MRI studies. CT findings showed complete opacity of the left maxillary and frontal sinuses and ethmoid air cells. Osteomyelitis was observed in the frontal and right parietal bones. There were normal air cells on the right side and mild septal deviation with normal turbinates' (Figure-2). 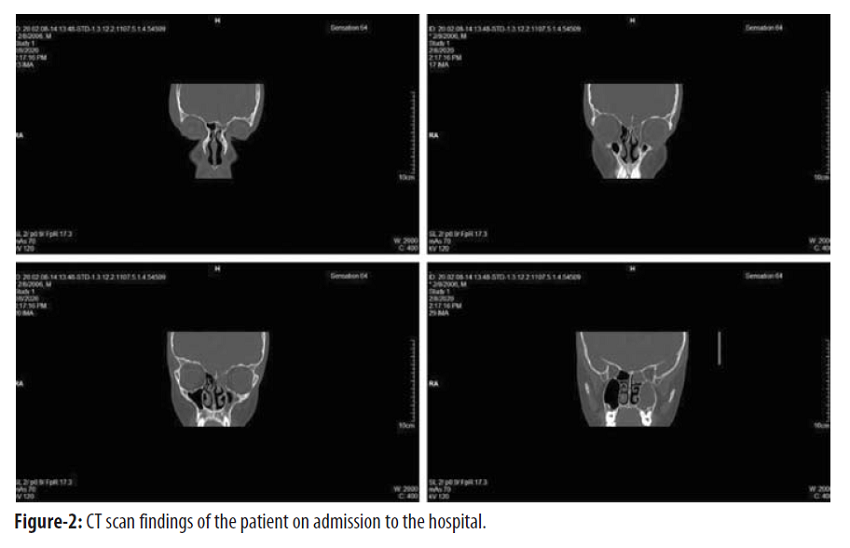 MRI findings revealed a fluid-like collection in the subgaleal space concomitant with subgaleal abscess with no intracranial extension or abnormalities (Figure-3). Imaging studies were examined by the neurosurgeon for a revised decision against neurosurgical intervention. 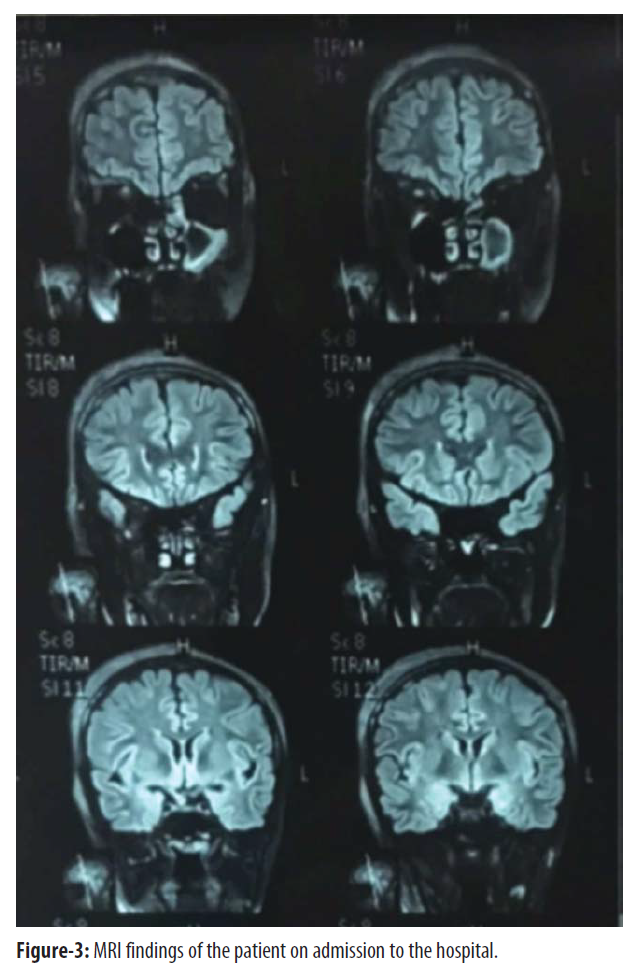 Surgical steps adopted were using, a wide bore syringe  for aspiration of the right frontal swelling and thick purulent pus was collected and sent for culture and sensitivity. A right brow incision was made to evacuate the pus with extension through non-dissecting blunt soccer through the abscess tract in the subgaleal space to the right parietal area and insertion of corrugated drain that was extended throughout the track. A small bony defect could be felt over the right parietal bone after evacuating the abscess. Another small incision was made in the left parietal area and very thick cheesy pus was drained. A corrugated drain was inserted. Bilateral Antral washout was done that showed pus from the left side and clear fluid from the right side. Trephining of the left frontal sinus was performed which also showed pus which was drained and a corrugated drain was placed in the frontal sinus.

The patient was discharged on 25th postoperative day on oral vancomycin 250 mg capsule every 6 hours for one month and in a good health (Figure-4). The patient was followed up by regular phone calls every week. No adverse events were reported after hospital discharge and the patient was asked to visit the hospital for confirmation of resolution by a new CT scan after finishing the course of the oral vancomycin but the parents refused. 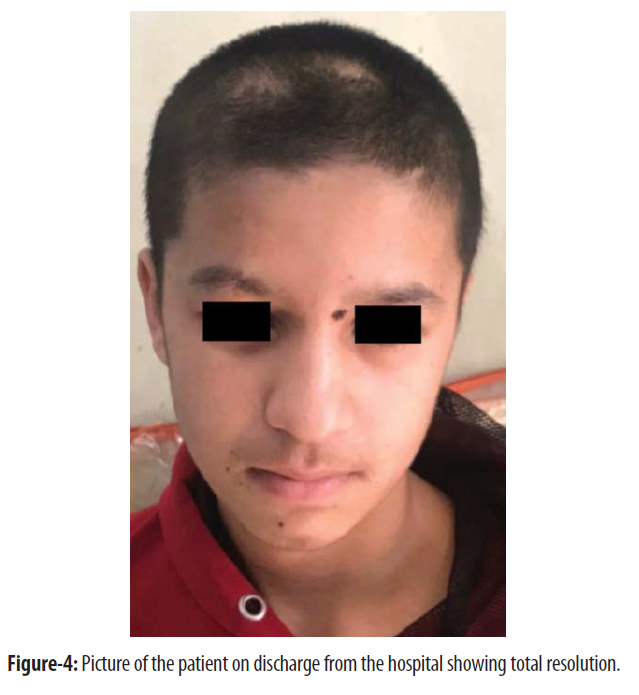 Paranasal sinusitis is considered a serious and life-threatening condition if neglected, or mis-managed properly. This situation may lead to extra and intracranial complications that result in high mortality and morbidity. Despite advances in medical strategies, regarding early and accurate diagnosis by CT scan, MRI and treatment with an antibiotic, the mortality from sinogenic intracranial complications has remained significant.5,6

The classical lesions of Pott's puffy tumour due to osteomyelitis and subperiosteal abscess usually involve the frontal region that occurs as a complication of acute frontal sinusitis, now a days, a rare clinical situation, especially in the antibiotic era.7-16 On rare occasions, there may be involvement of other extracranial regions, intracranial and intraorbital extensions,17,18 which happened in this case where parietal bone was also affected by osteomyelitis.

The subgaleal abscess is one of the extracranial complications, which differs from the subperiosteal and subcutaneous abscesses due to its widespread, extensive, massive elevation of the scalp extending over to the suture lines. In the subgaleal area, predominant small blood-vessels and emissary veins are placed in relation to dural sinuses with the superficial veins of the scalp with an open transition for intracranial infection.19 Despite of being widespread, subgaleal abscess is a less frequently reported complication of acute frontal sinusitis.4 It unfortunately occurred in this case too and was highly confusing as it was more prominent on the right side although the left frontal sinus was more diseased. This could be due to the collection of pus in the most dependent side of the head and evacuation of the left frontal sinus by surgery was successful in preventing spread of the subgaleal abscess. If a subgaleal abscess becomes extensive it can strip the galea from the frontal bone leading to deprivation of blood supply to the bone. This leads to osteomyelitis which is more fulminant and likely to spread with a high risk of intracranial complications.20 This is the probable explanation of osteomyelitis of the parietal bone identified in this case.

The mainstay of therapy after an accurate assessment of Pott's puffy tumour is by trephination through the medial aspect of the floor of the frontal sinus to decompress the infected sinus. Material obtained should be sent for culture and sensitivity tests. Advances in endoscopic sinus surgery have provided alternative access to the frontal recess to decompress the frontal sinus. If other sinuses are involved by the disease, drainage of the other diseased sinus may prevent future episodes of sinusitis.2 In this case the surgeon decided not to perform endoscopic surgery and to do urgent and fastest procedures by antral washout and trephining of the frontal sinus as the general condition of the patient was highly unstable due to anaemia which could not withstand long duration of anaesthesia.

The cultures from frontal sinusitis with complications frequently reveal polymicrobial involvement. Streptococci, staphylococci, and anaerobic bacteria are the predominant pathogens.21 This supports our finding in this case where the result of culture sensitivity showed growth of Staphylococcus aureus and Peptostreptococcus micros.

The parent's consent was obtained to publish the case of their son on scientific grounds.

The presented case is of a rare complication of Pott's puffy tumour of the frontal bones and right parietal bone with subgaleal abscess in a 14 year old boy which lead to the predominant bulging of the forehead on the right side with acute left-sided sinusitis. The abscess was drained followed by Bilateral antral washout and trephination of the left frontal sinus was done to evacuate the pus. Meropenem was given to treat the infection. The child recovered fully.

Disclaimer: None to Declare.