Knowledge of primary health care physicians regarding depression in elderly

Objectives: To assess the knowledge of primary healthcare physicians regarding elderly depression, and to study the association of different variables with the knowledge score.

Method: The cross-sectional study was conducted from March 1 to June 30, 2019, in 30 primary health care centres under the Al-Karkh Health Directorate, Baghdad, Iraq, and comprised all physicians present at the time. Data were collected using a self-administered questionnaire about the knowledge regarding depression in elderly patients aged >65 years along with risk factors, diagnosis, treatment and prevention. Data were analysed using SPSS 24.

Conclusions: The physicians had a good knowledge about elderly depression.

Late-life depression (LLD) is defined as a depressive disorder occurring in a patient aged >60 years, although the onset and the definition of cut-off may vary.1 Improvement in healthcare worldwide has led to decreased mortality rate and increased life expectancy. As a result, the population is aging, which is a normal biological process, not an illness or a cause of disability.2 As the most common mental health problem in older adults, LLD exerts a profoundly deleterious effect on patients, their families and communities.3

Primary care physicians (PCPs) play a key role in the care of patients with depression. They are usually the point of first contact with the healthcare system and can detect depression at an early stage.4 As PCPs are accessible and can provide continuity of care and foster long-term relationships with the patient, they are in a unique position to manage depression and should be familiar with the principles and modalities of treatment.5

Depression affects older people differently than younger people. In the elderly, depression often occurs with other medical illnesses and disabilities and lasts longer.6 Depression in the elderly is associated with an increased risk of cardiac diseases and an increased risk of death from illness. Studies among nursing home patients with physical illnesses have shown that the presence of depression substantially increases the likelihood of death from those illnesses.7

In Iraq, studies among elderly depression in primary healthcare centres (PHCCs) revealed a prevalence of 27.6%9 and 38.9%.10 The health services for the elderly are still far away from being ideal as the PHCCs lack a special unit with a decent referral system. Most of the health workers have reported the lack of training for geriatric services.11

Studies have shown that the quality of depression management depends on physician's knowledge and attitude towards it.12 Physicians who have adequate knowledge about depression are more confident in diagnosing the condition and starting the treatment. In contrast, those who have gaps in this topic are reluctant to manage depression.13

The current study was planned to assess the knowledge of PCPs regarding elderly depression, and to study the association of different variables with the knowledge score.

The cross-sectional study was conducted from March 1 to June 30, 2019, in 30 PHCCs under the Al-Karkh Health Directorate, Baghdad, Iraq. Using random sampling technique, 3 PHCCs were chosen from each primary health sector.

The research was conducted in accordance with accepted ethical principles that focus on protecting human subjects and communities and with approval by an ethics review committee (ERC) of the Iraqi Board of Medical Specialization. And after taking informed verbal consent, the physicians were interviewed to assess their knowledge regarding depression in the elderly aged >65 years. A self-administered questionnaire14-16 was given to each participant. It was validated by a panel of 2 FPs, 2 GPs and one psychiatrist, and had two parts, with part one comprising age, gender, duration of practice since college graduation certificate, specialty and qualification. The second had domains. The first domain included nine questions regarding general knowledge about depression in elderly. The second domain included seven questions regarding the risk factors. Domain three included three questions regarding diagnosis criteria of depression and tools used in diagnosis. Domain four included nine questions regarding treatment of depression in the elderly, and domain five included four questions related to preventive measures.

The answers of the physicians were scored 1 for each correct answer and 0 for every wrong answer. Domain and overall scores were calculated as frequencies and percentages. The knowledge level of the domain was divided into three categories; poor = <50%, fair = 50-74% and good — 75% and above.

Data were analysed using SPSS 24. Descriptive statistics were presented using frequencies, percentage, mean and standard deviation (SD). Chi-square test was used to find out the significance of association among related variables. P<0.05 was considered the discriminate point of significance. 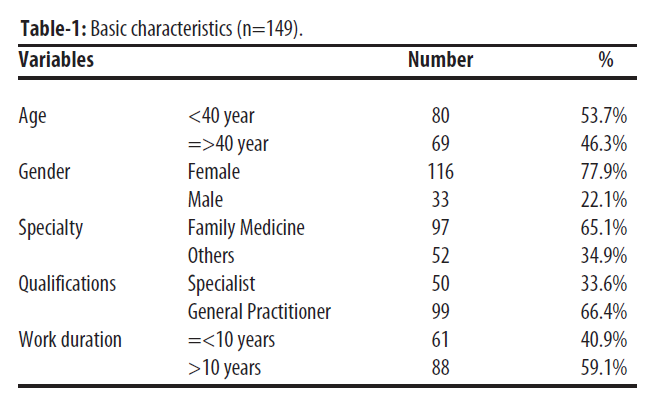 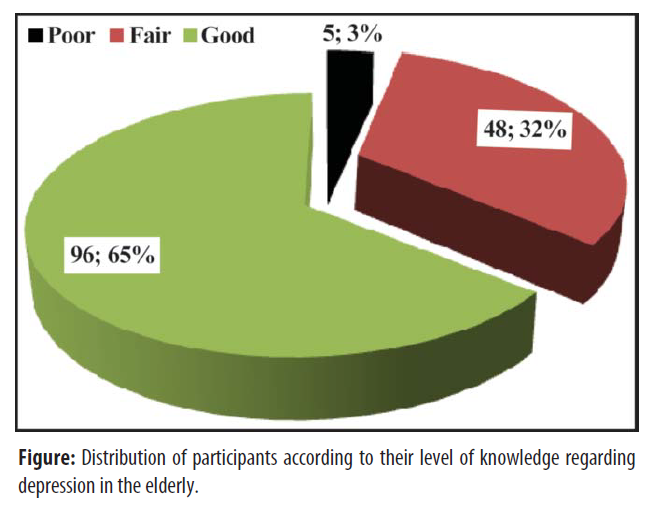 Family physicians, specialists and those aged >40 years had significantly better knowledge level (p<0.05). Gender and professional experience had no significant association with the level of knowledge (p>0.05) (Table-2).

Depression is the leading disease-causing disability that may pass unrecognised. In recent decades, the awareness about it has improved, but mental health specialists are not enough to fill the gap in the detection, treatment and follow-up of these patients.17

The results of the current study are in line with literature.18

Physician's knowledge has significant reflection upon their practice. As such, PCPs should have some degree of preparedness for identifying depression in older adults, because as much as 50% of depressed adults pass undiagnosed.19

The current study showed that FPs, specialists and those aged >40 years had better knowledge score. The finding is in agreement with earlier results.20 Managing depression in PHCCs is challenging and some FPs find it easier to diagnose and then refer the depressed patients to the psychiatrists. This concept is supported in literature.21

In terms of limitations, the current study did not scientifically calculate the sample size which can cause a decrease in the power of the study.

Acknowledgment: We are grateful to all the participants for their time and cooperation.

6.       Goldberg J. How Does Depression In the Elderly Differ From Depression in Younger Adults? [Online] 2018 [Cited 2019 March 07]. Available from URL: https://www.webmd.com/depression/ guide/depression-elderly