Objective: To investigate the modifying effect of treatment with vitamins C on irradiated mice tissues with gamma ray.

Results: There were 28 mice with a mean bodyweight of 20±2g; 7(25%) in each of the four groups. There was significant difference (p<0.05) between group 4 and group 3 in terms of foci forming. Significant differences (p<0.05) were found between the exposed and unexposed groups.

Conclusion: Vitamin C was found to be a good radio-protective agent for mice testes and spleen tissues. The main differences were clearly observed in the formation of gamma H2AX foci between testes and spleen due to their sensitivity to ionising radiation which depends on proliferation activity.

Ionising radiation is widely used in medical diagnostics and cancer-related therapy, and has additional industrial applications.1

Physical protection is essential to prevent the direct effects of radiation. It also affects the body indirectly though ionising radiation like gamma (g) rays which represent the main source of external exposures to humans.2 When radiation hits water molecules in host cells, it produces large amounts of free radicals and reactive oxygen species (ROS), which then oxidise the cellular components, resulting in cell injuries.3

Deoxyribonucleic acid (DNA) damage has been suggested to be important in mutagenesis and carcinogenesis. It can cause cellular damage by ionising radiation, including both high linear energy transfer (LET), forms of radiation, such as alpha (a) particle, and low LET forms of radiation, such as g and X-rays. High LET causes direct damage to DNA radiation, which differs from low LET radiation, mainly due to free radicals created during water radiolysis.4 Many antioxidant products are reported to have radio-protective effects. Vitamin C (VC) is one of the strongest antioxidant agents.5 Soluble in water, VC has generated a great deal of interest in recent years for a comprehensive range of protective effects in biological systems.6 The protective properties of VC are due in the main to its scavenging activity of ROS before they reach macromolecules.7,8 It decreases double strand breaks (DSBs) induced by ionising radiation. DNA was found to be protected against DSBs by the addition of VC. The treatment with VC pre-irradiation dramatically improved mouse survival after whole body irradiation (WBI) in mice. Pretreated with different VC doses for 3 days before WBI rescued some of the mice.6

In eukaryotes, H2AX is a unique protein and it is a key factor in the repair process of damaged DNA. It is a type of histone protein from the H2A family encoded by the H2AFX gene.9 An important phosphorylated form is gH2AX, which forms when DSBs appear. H2AX becomes phosphorylated on serine 139, and then called gH2AX, as a reaction on DNA. After irradiation with ionising radiation, H2AX is rapidly phosphorylated and there is always a constant number or percentage of gH2AX formed per DSB.10

Foci of gH2AX form in response to radiation-induced DNA DSBs. Several studies have analysed this marker in mice tissue samples to determine radiation exposure during various diagnostic or therapeutic radiation treatments.11 Nowadays, DNA damage plays a significant role in the development of atherosclerosis and other degenerative diseases, including some kind of autism, Alzheimer, Parkinson and cancer.12,13 The administration of VC up to 24 h (1, 6, 12, or 24 h) after WBI at lethal dose of ionising radiation effectively improved mouse survival. The administration of VC might reduce radiation lethality in mice even after exposure.14 However, accompanied by suppression of radiation-induced free radical metabolites, the administration of VC before g ray avoids chromosomal damage in cells and radiation-induced lethality.15 It has been reported that VC can prevent the adverse effects of WBI through increasing the antioxidant defense systems in different tissues of irradiated animals.15,16

The current study was planned to evaluate the radio-protective effect of VC of g ray-induced damage on testes and spleen, and to clarify the main differences between the sensitivity of tissues to ionising radiation depending on proliferation activity.

The animal experimenatal study was conducted in the Iraqi Center for Cancer Research and Medical Genetics (ICCMG), Unit of Medical Physics department of Physiology, college of Medicine/Al_Mustansiriyah/ Baghdad, Iraq from December 2019 to April 2020. Included were adult male Albino Bulb /c mice aged 8 weeks. The Animal Care and Research Ethics Commission of the same institution approved the study. The mice were randomly divided into 4 equal groups. Group 1, the controls, received standard saline solution untreated and were not exposed to radiation. Group 2 mice received dose of VC 200mg/kg/day intra-peritoneally injected without radiation. Group 3 was exposed to g ray without treatment with VC. Group 4 mice were administrated VC 200mg/kg/day intraperitoneally and exposed to the g ray. The mice, obtained from the ICCMGR, were isolated at least 8 days before they were irradiated in cages at a temperature of 22± 2ºC, relative humidity of 50±10% and 12-hours light-dark cycle. They received commercial rodent chew and sterile water.

For g ray procedure, the mice were placed in a well-ventilated, specially-made plastic container and exposed to single dose of 4Gy whole-body g ray given at a dose rate of 0.3 Gy/min at the energy by 1.17, 1.33 megaelectronvolt (MeV) of eight pencils of Cobalt-60 (60Co) source for 13min in the Laboratory of Nuclear Sciences at the College of Sciences, University of Baghdad. The procedure was duplicated for all the other groups concerning exposure to g ray.

VC (Alpha Chemika, India, Batch No. G196707) was dissolved in physiological saline solution, and the adjusted VC solution was administrated intraperitoneally (IP) for 8 days in a dosage of 200mg/kg/day. The antibody used was anti-gH2AX Phospho S139 (Abcam, United Kingdom; 9F3; ab26350) with 1:200 dilution.

The mice were sacrificed and testes and spleen tissues were collected after irradiation at 1, 3 and 24 hours. Tissues were fixed at 10% buffered formalin solution for 24 hours and then transmitted to 70% ethanol before further processing with paraffin-embedded block. Immunohistochemistry (IHC) analysis was performed on 5µm sections. The antibodies used were gH2AX Phospho S139 antibody 9F3 ab26350 with 1:200 dilution. An optical microscope with camera (CX4IRF; Olympus Optical Co. Ltd., Tokyo, Japan) was used to detect the foci with a magnification strength of X 40 at the Unit of Medical Physics, Department of Physiology, College of Medicine, Al Mustansiriyah University. The foci were divided by taking four fields of tissues, with each field taking 100 cells. Each cell was classified according to the number of DSB foci. Then an average of four fields was taken and categorised as mild 0-3, moderate 4-6, and severe >7.

Data was analysed using SPSS 24. Paired t-test was used to determine the difference between the control and the irradiated groups. P<0.05 was considered significant. 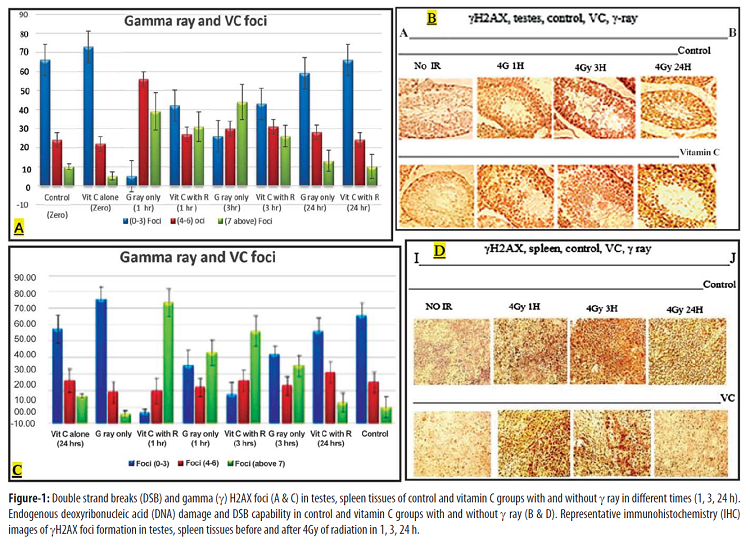 Foci number changed as the radiation dose for g ray change in groups with and without VC. This was observed in mild, moderate and severe categories (Figure-1C). 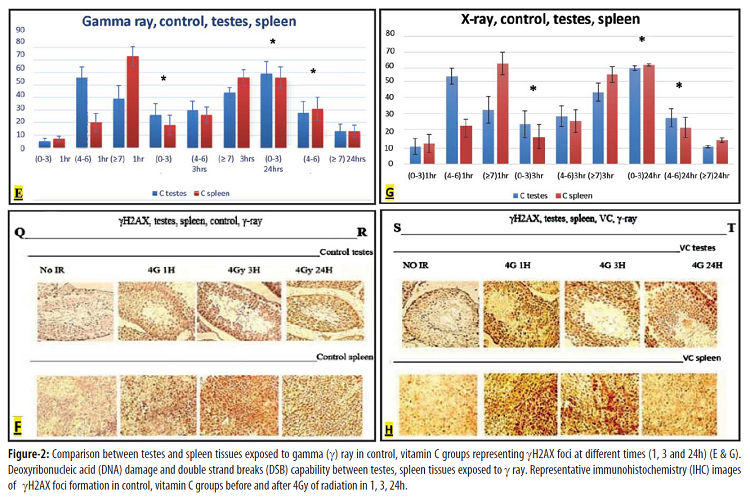 At 24h, there was no significant different (p>0.05) in any of the categories in control zero compared to its irradiated counterpart.

The endogenous DNA damage and DSB in spleen tissues (Figure-1D) showed the main differences in microscopic pictures for gH2AX foci at different times. Also, the peak of forming foci number was touched in 1h and then decreased gradually in 3h to 24h.

Endogenous DNA damage and DSB between the two tissues irradiated with 4Gy of g ray with and without VC showed slight differences in microscopic pictures for gH2AX foci that formed in different categories (Figure-2F-H).

The testes, which generate male germ cells, was identified to be a radiosensitive organ in the body. Testicular damage after local or WBI by external source g ray has been well documented in both animals and humans.18,19

The current study was planned to investigate the radio-protective effect of VC on g ray-induced damage to the testes and spleen, and to determine the extent of changes in DNA of mice testes and parameters following 60Co g ray. It summarised the differential sensitivities to DNA damage in testes tissues, and DNA repair mechanisms activated by preservation of these tissues with the use VC as an effective protection agent, which is in line with literature.20

When evaluating DSBs after radiation with 4Gy exposure for VC group in testicle, mice tissue showed reduced amount of g ray-induced gH2AX foci in 1, 3, 24h sequentially after radiation. In the control group after irradiation with the same dose without treatment with VC, excess foci was obtained in the same time. This indicates the protective effect of VC, which is similar to recent studies.16,21,22

The gH2AX foci appear abundantly in irradiated testes in 1h and then DSBs were quickly repaired at around 3h, but in 24h foci markedly decreased after 4Gy in the control group. In the VC group, marked enhancement DSBs repaired in 1, 3, 24h.

The effect of g ray on the spleen and compared cell proliferation activity with testes tissues showed that spleen cells were highly proliferative and were sensitive to radiation. In addition, formation foci in spleen was more than in the testes. These results suggest that the regulatory mechanism of foci formation level is tissue-specific.17 Therefore, it is a possibility that cell proliferation activity is an important factor for phosphorylation process in vivo that immediately found compared between the testes and the spleen. On the other hand, VC showed significant role in vivo. Further studies are necessary to confirm this finding.

The use of VC as a radio-protective agent for sensitive tissues had a clear effect in reducing DNA damage and increasing the repair mechanisms in animal tissues exposed to radiation. The differences in the sensitivity of the tissues exposed to radiation, in the testes and spleen, had a great impact on assessing DNA damage as well as the mechanisms for repairing. In addition, the difference in foci number level between the spleen and testes tissues might correlate with cell proliferation activity. Therefore, VC showed a significant role in vivo.