Objective: To evaluate the efficacy of serum uric acid on inpatient morbidity and mortality among acute coronary syndrome patients.

Method: The hospital-based study was conducted in the Coronary Care Unit of Al-Yarmouk Teaching Hospital, Baghdad, Iraq, from June 1, 2019, to February 28, 2020, and comprised acute coronary syndrome patients of either gender aged >18 years. Other than the demographics, data was collected on echocardiography findings, cardiac markers and serum uric acid level. Data was analysed using SPSS 20.

Conclusion: There was an association between hyperuricaemia and in-hospital complications of patients with acute coronary syndrome in comparison with patients with normal serum uric acid levels.

Acute coronary syndrome (ACS) comprises the most serious and dreadful diseases, consisting of the very well-known three categories, the ST-segment myocardial infarction (STEMI), non-ST-segment myocardial infarction (NSTEMI) and unstable angina (UA). These are closely connected conditions with similar pathogenesis and clinical presentation, but they do differ by the level of severity.1

It is almost always associated with rupture of an atherosclerotic plaque and partial or complete thrombosis of the infarct-related artery.2

The accumulation of atherosclerotic plaques is no longer considered to be a simple result of cholesterol storage. Inflammation is increasingly implicated in plaque formation.3

Independent association between uric acid and cardiovascular disease (CVD) has been reported, but its role as a risk predictor for outcomes in people with ACS remains controversial.5 The physiopathological mechanisms leading to increased risk are still unknown, but serum uric acid has been significantly associated with endothelial dysfunction, antiproliferative effects, and high oxidative stress (OS).6 In 2018, the expert consensus for the diagnosis and treatment of patients with hyperuricaemia highlighted the importance of monitoring serum uric acid levels in patients with hyperuricaemia and high CV risk.7

Uric acid production and metabolism are complex processes involving various factors that regulate hepatic production, as well as renal and gut excretion of this compound. Hyperuricaemia can result from increased production or decreased excretion of uric acid or from a combination of the two processes.8 Hyperuricaemia is defined as serum urate level >7mg/dl (415µmol/L) for men and >6mg/dl (357µmol/L) for women.9

Recent data suggests that serum uric acid at high-normal level is associated with CVD risk factors and CVD, often being a predictor of incident events.10 Elevated serum uric acid concentration may reflect impaired endothelial integrity, in which endothelial-dependent vascular relaxation produced by nitric oxide is reduced. This process contributes to the evolution of atherosclerosis.11

Uric acid can stimulate pro-inflammatory pathways and induce C-reactive protein (CRP) production and redox pathways, thus promoting intracellular OS. The latter interaction may reconcile the two opposing antioxidant vs pro-oxidant views regarding uric acid and OS: it has been proposed that uric acid may act as an antioxidant extracellularly and as a pro-oxidant intracellularly.12

Using urate-lowering therapy (ULT) might help clarify the relationship between serum uric acid and CVDs. If ULT attenuates CVD development, the global burden of the disease would be prominently reduced.15

In gout patients, a relationship was detected between uric acid level and CV risk. The pathophysiological mechanisms responsible for the association suggest that the use of ULT in the long term may reduce CV risk.16

The current study was planned to evaluate the efficacy of serum uric acid on inpatient morbidity and mortality among ACS patients.

The hospital-based study was conducted in the Coronary Care Unit (CCU) of Al-Yarmouk Teaching Hospital, Baghdad, Iraq, from June 1, 2019, to February 28, 2020. The study was approved by the Scientific Council of Internal Medicine of the institution. The sample size was not calculated but a convenient number of 70 patients were enrolled. Those included were patients who were recently-diagnosed ACS patients of either gender aged >18 years. ACS covered STEMI, NSTEM and UA as seen on the basis of symptoms, electrocardiogram (ECG) findings and cardiac markers. Those excluded from the study were patients aged <18 years, those with gout and being treated with ULT, patients on certain medications, such as thiazide and loop diuretics, patients with chronic kidney disease (CKD), and patients with chronic haemolytic anaemia.

Echocardiography was done by the cardiologist. Serum uric acid was tested for all the patients. They were subsequently divided into normal and hyperuricaemia groups.

The patients were subjected to detailed physical examination, and vital signs were routinely checked. They were followed up during hospitalisation for any complications and outcome, like arrhythmia, heart failure and death.

Data was analysed using SPSS 20. Continuous variables were presented as means ± standard deviation, or as median and interquartile range (IQR), according to their distribution determined by Kolmogorov-Smirnov test. Comparisons between groups were done using student's t-test or nonparametric tests, as appropriate. Categorical variables were reported as frequencies and percentages, and were compared using chi-square test. P<0.05 was considered statistically significant.

All patients included were explained the details and purpose of the study and had signed the consent form. The ERC approval was granted on 6th of September 2020 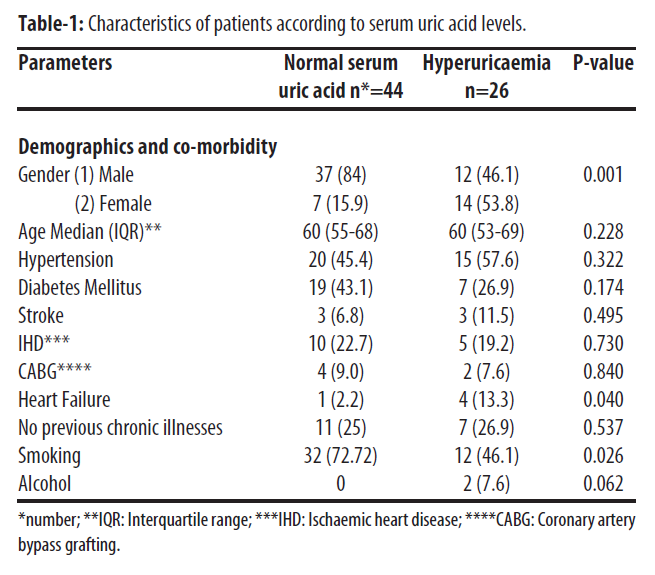 The length of hospital stay was not significantly different between the groups (p=0.225).

Patients were monitored during hospitalisation and for one week afterward for any complications. Overall, 20(28.5%) patients had complications; 7(35%) with normal serum uric acid levels, and 13(65%) with hyperuricaemia (p=0.007) (Table-2). No deaths were reported in the sample.

The present study evaluated the value of serum uric acid and its clinical importance as an autonomous hazardous factor.

The study showed hyperuricaemia was more in women than in men, which is consistent with an Indian study.19

An association was established between heart failure patients and hyperuricaemia, which is compatible with an observational study.20

No association of HTN and alcohol intake was found with elevated serum uric acid, and this was reported earlier as well.21

The frequent presentation of patients associated with elevated serum uric acid was NSTEMI. This was in contrast to a retrospective analysis which reported no particular ACS presentation.13

Most of the patients with elevated cardiac markers also had elevated serum uric acid levels. It was in a disagreement with a retrospective cohort study in China.7

The current study did not exhibit a prominent association of hyperuricemia with mortality rate and the length of hospital stay. A retrospective study in China reported an associationwith mortality.23

The current study has its limitations. The prevalence of hyperuricaemia cannot be generalised as the study was conducted at a single centre. Besides, the sample size was not calculated. The patients were enrolled as a convenient number of 70. Further, some risk factors, like body mass index (BMI), dietary habits, and other biomarkers and lipid profiles could not be included due to time limitations and the focus being on serum uric acid results. Some patients with certain diseases, like CKD, chronic haemolytic anaemia, and gout, who were on ULT and patients on certain diuretics, like thiazide and loop diuretics, were not included due to the possible effect on uric acid metabolism which may have interfered with the results. In the light of the findings, multicentre studies with larger sample size and longer follow-up are recommended. To identify the magnitude of a risk factor, targeting a specific treatment, such as ULT, and putting a management plan of treatment, results on cardiovascular system should be considered to assess the independence and to highlight serum uric acid effects.

There was a significant association between hyperuricemia and in-hospital complications among ACS patients compared to patients with normal serum uric acid levels. This could accentuate effect on morbidity as it might be considered an independent risk factor that highlighted the need for risk stratification for these patients. No effect on mortality was shown as this might need a longer follow-up of these patients for further assessment.

Disclaimer: The text is based on a thesis done for partial fulfillment of the requirement for the degree of the fellowship of the Arabic Board in Internal Medicine.