Objective: To measure serum Kisspeptin levels in women with Polycystic Ovary Syndrome and compare it with that of normal fertile women.

Methods: A case-control study was done at Al-Yarmouk Teaching Hospital /Baghdad, Iraq for nine months duration from March 2019 to December 2019. It included 45 patients with Polycystic Ovary Syndrome (case group) and 45 fertile women at least having one child as (control group). Blood samples were obtained from all women in the study to measure luteinizing Hormone (LH), Follicular Stimulating Hormone (FSH). Anti-Müllerian Hormone (AMH), Thyroid Stimulating Hormone (TSH), Prolactin (PRL) and Kisspeptin. Random blood glucose was also esrimated in both groups and the results were compared.

Polycystic Ovary Syndrome (PCOS) is a collection of various signs and symptoms, with mild manifestations in some, to severe disruption of endocrine, reproductive and metabolic function in others.1 A link between chronic low grade inflammation and PCOS has been mentioned by some studies, but the causal relationship is still uncertain between obesity, insulin resistance, or the polycystic ovarian syndrome itself.2,3 Fifty to seventy percent of women with PCOS have hyperinsulinaemia,4 which is commonly recognized as an important threat for development of metabolic syndrome.5 The pathophysiology of PCOS have many extra ovarian explanations, however ovarian dysfunction plays the major role.1

The crucial controller of the hypothalamic pituitary ovarian axis is pulsatile Gonadotropin Releasing Hormone (GnRH) secretion which determines the secretion pattern of the gonadotropins (FSH & LH), and subsequent gonadal functions.6

Inspite of being LH dependent, the moderate increase of LH which characterizes PCOS, is not considered the primary cause of the high ovarian androgen level. The reason is the normal process of LH-induced desensitisation of theca cells.7 Kisspeptin arose to have a directive role on fertility function.8 Kisspeptin /Kiss-1receptor signalling was considered a major stimulus for the secretion of GnRH and gonadotrophins.9

This study was conducted to measure the serum kisspeptin level in women with PCOS and compare it with that of normal fertile women.

This is a case-control study conducted at Al-Yarmouk Teaching Hospital for nine months period from March to November 2019.

Approval of the proposal of the study was obtained from Scientific Council of Obstetrics and Gynaecology, Council of Iraqi Board of Medical Specialization.

Verbal informed consent was obtained from each participant before their enrolment in the study. Patients were collected from gynaecology and infertility outpatient clinics of Al-Yarmouk Teaching Hospital, Baghdad. Women with complaints of primary or secondary infertility and with diagnosis of PCOS were included in the study.

The inclusion criteria comprised of age between 18 to 40 years. Case group had primary or secondary infertility diagnosed as PCOS according to Rotterdam Criteria.10 The control group had apparently healthy fertile women.

The exclusion criteria were women with Cushing syndrome, thyroid disease, hyperprolactinaemia and those taking steroids.

The study included 45 patients with PCOS (case group) and 45 fertile women with at least one child as control group.

Participants were classified according to BMI as10

Participants were classified according to W/H ratio:

Statistical analysis: The data was analyzed using Statistical Package for Social Sciences (SPSS) version 25. Receiver operating characteristic (ROC) curve analysis was used for prediction of kisspeptin level as diagnostic of PCOS. The p-level less than 0.05 was considered significant. The sample size was not calculated scientifically.

As seen in Table-2, the cut off point of kisspeptin level, 189 pg /ml, was found to be a predictive factor for the diagnosis of PCOS. The area under the curve (AUC) in ROC curve (96.3%) performs well as a general measure of predictive accuracy. Kisspeptin level was 93% sensitive, 80% specific, and 86.7% accurate as a marker for prediction of PCOS. 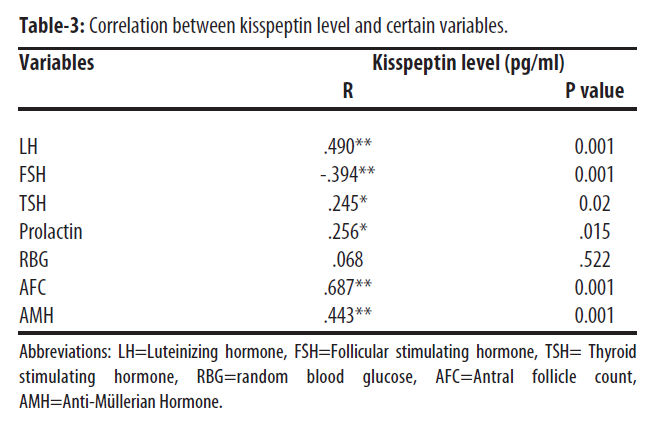 The present study found that kisspeptin level in women with PCOS was significantly higher than that in healthy women (P= 0.001), which is in agreement with that of other studies as of Chen et al12 Jeon et al13 and Yilmaz et al14 Gorkem et al15 and Kaya et al16 who in their studies found that kisspeptin increased in PCOS group compared to control group. A positive correlation of kisspeptin with LH and leptin levels in PCOS was mentioned by Emekci et al in 2016, the study found, no statistically significant difference in neither serum kisspeptin nor leptin in control group and PCOS group,17 which is not in agreement with the current study.

Varikasuvu et al. (2019) in their meta-analysis of 12 studies on women with PCOS, found increased circulatory KISS-1 levels which was positively associated with AMH,19 which is consistent with the current study.

Also Kaya et al. (2019) observed positive significant correlation of kisspeptin with both LH and AFC, but showed no statistical significant association between kisspeptin and AMH (P=0.81).16

The present study showed negative correlation between kisspeptin level and FSH which is in agreement with a study done by Gorkem et al. (2018).15

The results of the present study were comparable with those of Kaya et al. (2019) regarding statistical significant correlations between kisspeptin level and prolactin (P > 0.05 and p=0.35).16

In the current study there was statistical significant correlation between kisspeptin and TSH. In a study done by Tomori et al. (2017) which assessed the role of kisspeptin in the disturbed secretion of gonadotropin in hypothyroid patienrs, kisspeptin expression in the ARC was inhibited due to a low thyroid hormone level, revealing that the dysregulation of reproductive function in hypothyroidism is due to the suppression of kisspeptin neurons in the ARC.20

The sample size was estimated according to local clinical case attendance to the hospital during the time of the study. It is acknowledged that a correct scientific method for sample size calculation was not used.