Objective: To determine the validity of the placental thickness for calculating the gestational age during the third trimester.

Methods: A cross-section prospective study was carried out from March 2019 to January 2020 at the Obstetrics and Gynaecology Department  in Al Yarmouk Teaching Hospital, Baghdad, Iraq on 90 women with low risk pregnancy and gestational age between 34 to 37 completed weeks, recruited from the antenatal clinic. The foetal gestational age was estimated by the accurate date of the last menstrual period and early ultrasound at 11-14 weeks of gestation. Placental thickness was determined  at the umbilical cord implantion site. The association between placental thickness and gestational age was established.

The placenta is a temporary structure that connects the foetus to the wall of the uterus to deliver oxygen and nutrients, waste elimination via the mother's blood supply; and to produce hormones which support pregnancy.1,2 For maintenance of a healthy pregnancy the placenta development should be highly regulated that is essential for normal foetal growth and development.2 Any deviation from the norm such as incomplete invasion of trophoblast can alter placental angiogenesis which is considered as a cause of many disorders during pregnancy as preeclampsia.4 The placenta usually has a disc shape, averages 22 cm in length, with the center being thicker than the edges, It weighs approximately 500 grams, it is hypotrophic if less than 300 g and hypertrophic if more than 700gram.5,6 Its location is classified into posterior, anterior, fundal and lateral.7 As a part of physiological aging process placentas develop some degree of calcification at term. But if calcification occurs before 36th week, it could cause complications as foetal growth restriction and foetal distress.8

A total of 90 pregnant women with low risk pregnancy between 34 to 37 completed weeks of gestation were included in this hospital-based cross-sectional study conducted at Al Yarmouk teaching Hospital, Baghdad, Iraq between March 2019 - January 2020. The sample size was calculated based on the correlation coefficient R=0.01 and using alpha 0.01 Beta 0.01 with reference to the Nigerian study.15 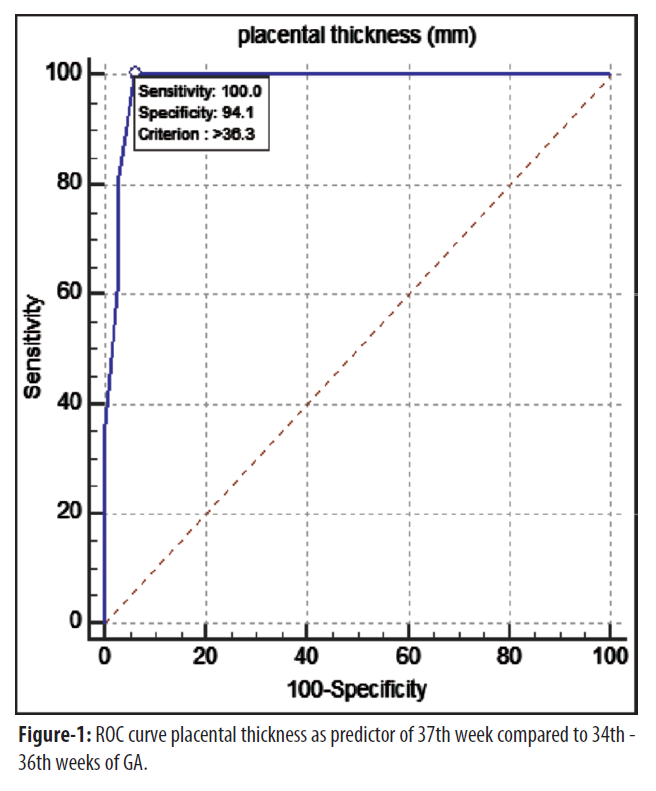 The figure calculated for the sample size was 63 and in order to increase the accuracy of our findings the figure was increased to 90. It was approved by the Scientific council of obstetric and gynaecology/the Iraqi board for Medical Specialization, The gestational age was estimated depending on accurate dates of the last menstrual period (LMP) and early ultrasound (US) between11-14 weeks of gestation (using crown rump length). Any woman with unsure LMP, lactation amenorrhoea, irregular cycle and women on contraceptive pills for the last 3 months prior to pregnancy were excluded. Pregnancy complicated by amniotic fluid abnormality, medical disorder, intrauterine growth restriction, foetal anomalies, multiple pregnancy, placental abnormalities, poor visualization of the placenta and site of cord insertion and women who had started labour, were also excluded. Informed verbal consent was obtained from all participants who met the inclusion criteria. A detailed history and clinical examination and investigations were sent. US scan was done with sector probe 3.5MHZ logic p5 TOSHIBIA ultrasound convex array transducers . The foetus were examined for any anomaly, amount of liquor and GA was estimated by measurements of foetal biometry (femoral length, parietal diameter and head circumference). For placental position, morphology was determined and thickness in millimeters was measured with patient in supine position with a moderately distended urinary bladder, and with no uterine contraction. The measurement should be at the level of cord insertion and averaging the three measurements for each patient.

For statistical analysis, the chi square test was used to evaluate the discrete variable. T-test and one way ANOVA was used to evaluate differences in mean among 2 groups and more than two groups, the post Hoc Tukey test was used to assess which pair was meaningful with r being the correlation coefficient and representative of the magnitude and direction of a relationship.The receiver operator curve was used to validate various parameters when distinguishing active cases from the control (negative cases) and the area under the curve, i.e. The AUC and its p value recommended this validity (if AUC > 0.9 means excellent test, 0.8 - 0.89 means good test, 0.7 - 0.79 fair test and otherwise unacceptable). Trapezoidal method was used to estimate the curve. SPSS 22.0.0 (Chicago, IL) software package was used for statistical analysis, p<0.05 was considered significant.