Objective: To elucidate the anti- Methicillin resistance Staphylococcus aureus (MRSA) effect of pomegranate alone and in combination with moxifloxacin fluoroquinolone.

There is an urgent and incessant need to discover and find out new antimicrobial compounds with novel mechanisms to combat the alarming bacterial resistance against conventional used antibiotics. There are different strategies to control and alleviate the infections caused by multi- antibiotic resistance strains of bacteria, one of which is through isolation of different phytochemicals from different herbs, which could control the spread of infections.1 In a similar way, synergistic combinations using different phytochemicals and commercially available antibiotics are an effective method against resistance bacteria and regarded as potential resistance modifying agents.2 The latent mechanism of phytochemicals in the potentiating of antibiotic effects is through inhibition of antibiotic efflux or synergizing the antibiotic effects at the site of actions.3 In addition, the extensive use of antibiotics in the treatment of bacterial infections had led to the emergence and appearance of resistant bacterial strains.

Staphylococcus aureus (S. aureus) is one of the most resistant bacteria associated with health care and community associated infections.4 S. aureus is a commensal bacteria, which is frequently present on the skin and nasal mucous membrane, as 20% of individuals are persistent carriers of S. aureus. Historically, S. aureus resistance was emerged within two years of penicillin discovery in 1942, after that, methicillin was introduced as an alternative in the late 1950 until methicillin resistance to Staphylococcus aureus (MRSA) was developed in 1960.5,6 Therefore, MRSA is resistant to most antibiotics and efforts to find phytochemicals alone or in combination with different antibiotics have been extensively studied.

Therefore, objective of the present study was to observe the anti-MRAS effect of pomegranate alone and in combination with moxifloxacin fluoroquinolone antibiotic.

The selected bacteria: A total five clinical isolates of MRSA (ATCC 43300) were used in this study purchased from National Microbiology Institutes, College of Science, Baghdad University. Bacterial strains were incubated and maintained in nutrient agars at 37°C for 24 hours and one colony from MRSA stock culture was inoculated in 4mL of nutrient broth.

Chemicals and drugs: Moxifloxacin 400mg tablet (MAHAFLOX 400mg, mankind Pharma, Ltd, India) and pomegranate extract 1g capsule (pomegranate seed extract 70% ellagic acid, CA92614, USA) were purchased from the private pharmaceutical company. Stock solutions of antibiotic and pomegranate were prepared and dilutions made according to the clinical and laboratory institute (CLSI) guidelines.11 Dimethyl-sulfoxide (DMSO) was used as a solvent and had no any effect against MRSA and regarded as negative control.

Measurement the inhibition of MRSA growth: Disc diffusion method was used to determine the anti-MRSA effect of pomegranate and/or moxifloxacin by using Mueller-Hinton agar12 which was poured in 9cm sterile petri dishes. 6mm paper discs contain pomegranate, moxifloxacin or their combination were prepared and placed against DMSO on the inculcated agar surface. Petri-dishes were incubated at 37°C for 24h. Zone of inhibition (ZOI) which represents the clear area around the impregnated disc was determined through measuring the diameter of ZOI. The dimension of ZOI was regarded as an indicator of the effectiveness of pomegranate, moxifloxacin and their combination. If the edge of ZOI was regular, the diameter represented the ZOI whereas; if the edge of ZOI was irregular, radius of ZOI and multiplied by 2 represented the ZOI.

Measurement of minimal inhibitory concentration: According to the National Committee for Clinical Laboratory Standard (NCCLS),13 the serial dilution method was used to obtain the stock solution of 100mg of moxifloxacin and 100mg pomegranates that were dissolved in 1mL of DMSO with subsequent dilutions. The serially diluted solutions containing pomegranate, moxifloxacin or their combination were added to plates containing Mueller-Hinton agar. Steer replicator containing 5×105CFU/drop of MRSA was placed on each prepared plates and incubated at 37°C for 18h. Minimal inhibitory concentration (MIC) represents and symbolized the lowest concentration of used agent at which no visible bacterial growth was detected. Plates were read in duplicate, and MICs were recorded according to the breakpoints tables of NCCLS to conclude susceptibility or resistance of MRSA to the selected agent and antibiotic.

Fractional inhibitory concentration: 0.5 McFarland turbidity standard of MRSA isolates were inculcated on Mueller-Hinton agar plates and impregnated moxifloxacin disc alone or in combination pomegranate was placed onto each plate that were incubated for 48h at 37°C. For testing the combination, moxifloxacin disc was placed for 1h, it was replaced with a pomegranate impregnated disc on the same agar and vice versa for pomegranate. From these calculated MICs, fractional inhibitory concentration (FIC) of moxifloxacin and pomegranate were calculated.

MIC of A alone

MIC of B alone

Time-kill assay: The dynamic picture of the bactericidal effect of pomegranate and/or moxifloxacin was determined by NCCLS. MRSA isolates were incubated with pomegranate and/or moxifloxacin at 37°C, and viable bacterial counts (CFU/mL) were done after 0, 4, 8 and, 24 h. 1/4 of MIC of the tested agents for each isolates. This curve was plotted as log (CFU/mL) over 24h; synergism is equal to the reduction of colony count more than 100 CFU/mL, antagonism is equal to the increase of colony count more than 100 CFU/mL.15

Data analysis was done by using SPSS (IBM SPSS Statistics for Windows version 20.0, 2014 Armonk, NY, IBM, Corp). The data was presented as mean± SD and unpaired student t test was used to determine the level of differences. Analysis of variance (ANOVA) followed by Benferroni post-hoc test was used to compare results of study variables among different groups. The level of significance was regarded when P<0.05. 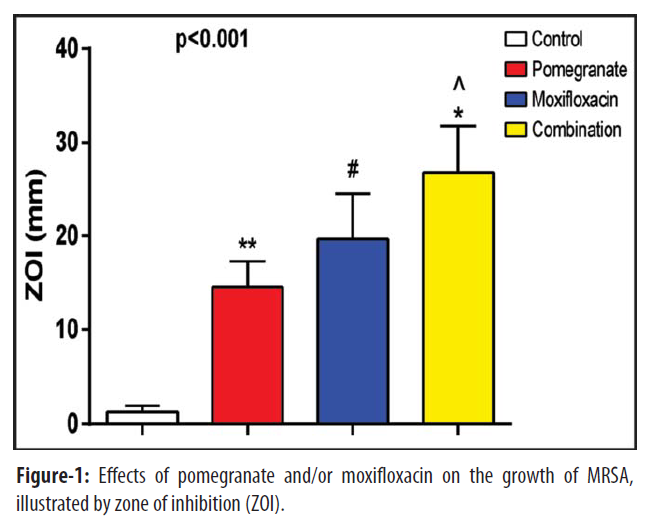 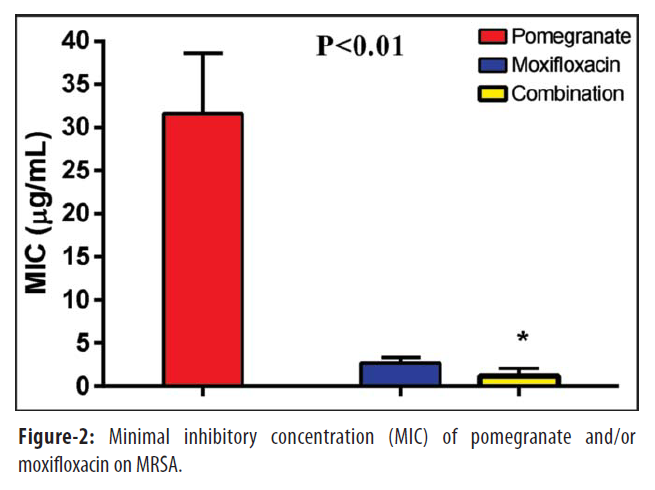 Fractional inhibitory concentration (FIC): The FIC of the pomegranate was 0.038 and FIC of moxifloxacin was 0.45, therefore sFIC index was 0.488, equal to the synergistic effect, (Figure-3). 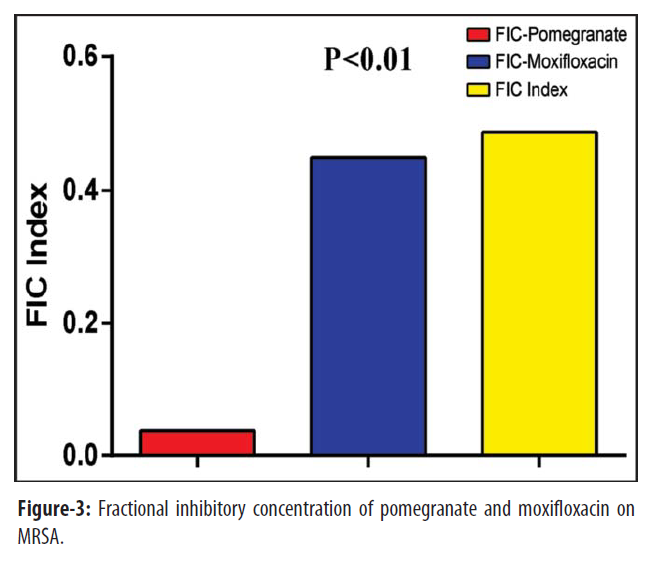 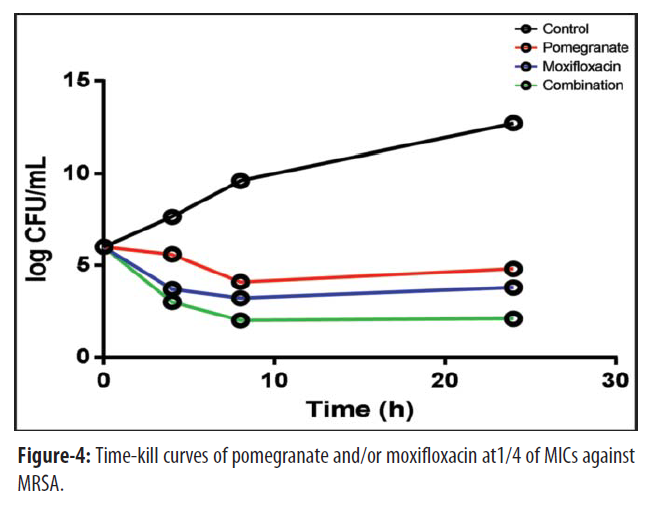 MRSA is the main cause of nosocomial infections due to resistance to the commonly used antibiotics and other antimicrobial agents like penicillin, cephalosporin, tetracycline, chloramphenicol and macrolides. Therefore, this bacterium is regarded as a challenge to the existence antimicrobial agents.16 For that reason, continued searches were and are done to identify new therapeutic agents with noteworthy efficacy against MRSA.

It has been reported that pomegranate has significant wide-spectrum antibacterial activity against different Gram-positive and Gram-negative bacteria due to the presence of phyto-constituents such as phenolic and saponin compounds, which are mainly derived from pomegranate bark.21 In the present study, pomegranate seed extract was used, which contains mainly ellagic acid, a most potent antibacterial constituent as suggested by Rosas-Burgos et al.22

On the other hand, pomegranate led to synergistic effect when combined with moxifloxacin as sFIC index was less than 0.5 as shown by Hemaiswarya et al23 who observed the synergistic effect between natural product flavones and different antibiotics. It has been noticed, that ellagic acid had an inhibitory effect on bacterial DNA-gyrase, which might explain the synergism with moxifloxacin, as the latter acts through inhibition of this pathway.24 Ellagic acid from pomegranate is highly lipophilic and has ability to inhibit MRSA DNA-gyrase and prevents cleavage of DNA during bacterial replication process.25 Therefore, ellagic acid-rich pomegranate extract leads to the bactericidal effect against MRSA bacteria when used alone or in combination with moxifloxacin, which in part explains the high percentage of the killing rate of this combination as compared with pomegranate or moxifloxacin alone.

Limitations of this study were small sample size of bacterial strains, antibacterial activity of pomegranate against methicillin sensitive Staphylococcus aureus (MSSA) was not evaluated, and other constituents also were not evaluated against MRSA. In spite of these limitations, this study is regarded as a novel study concerning the synergistic bactericidal effect of pomegranate and/or moxifloxacin against MRSA.

Acknowledgment: To the all members in College of Medicine, Al-Mustansiyriah University.