The role of Aescin versus Prednisolone in the management of symptomatic lower ureteral calculi: A comparative study

Objective: To evaluate the efficacy and safety of aescin compared to prednisolone in the management of symptomatic distal ureteral stones.

Method: The prospective comparative study was conducted from April 2016 to December 2019 at Al-Yarmouk teaching hospital, Baghdad after approval from the Iraqi Board of Urology and the Iraqi Urological Association, Iraq. It comprised patients with distal ureteral calculi presenting with acute ureteric colic who were managed in an outpatient setting. The sample was randomised into aescin group 1, prednisolone group 2 and placebo group 3. The treatment course lasted 10 days in each group. The treatment outcomes were pain relief, disappearance or decrease of upper tract dilatation, stone expulsion rate and adverse effects of the medications used.

Conclusions: Aescin was found to be effective and may even be used as a substitute for steroids as medical expulsive therapy.

Factors that determine the likelihood of ureteral stone's spontaneous passage are basically stone size, site and the internal structure of the ureter, which are non-modifiable factors.1-3

Ureteral spasm and ureteral sub-mucosal oedema around the stone are the other factors that may play a role in stone impaction or delayed stone expulsion. These are considered modifiable factors.4-6

The goals of medical expulsive therapy (MET) are to pre-empt the modifiable factors and to control the associated pain until stone expulsion, which in effect means achieving a faster and less painful stone expulsion, thereby reducing the burden on the patient and on hospitals in terms of less urological emergency visits and less stone removal procedures.5,7

Most clinical trials on MET evaluate the drugs that relieve ureteral spasm, like calcium channel blockers and alpha (a) blockers.7-10

Studies on drugs that relieve ureteral sub-mucosal oedema have been few, evaluating mainly the role of steroids in conjunction with other relaxant agents, and not focussing solely on MET.3,5,6,11

Studies have concluded that steroids had a beneficial role in ureteral stone expulsion, may be more obvious in reducing expulsion time with larger stones, but their major drawback is the considerable adverse effects, especially in large doses or when used for long periods.5,6,11,13

Aescin, a herbal product based on horse-chestnut in pure form, is well-known for its anti-exudative, anti-inflammatory and anti-oedema effects at the site of the lesion, which may be attributable to decreased vascular permeability by reducing the number and size of the pores in the capillary wall through its adenosine triphosphatase (ATPase) inhibition. It quickly relieves symptoms caused by localised swelling without adverse effects on mineral metabolism or the blood-forming system.14-17

Having such anti-oedema and venotonic properties, it was used effectively in varicosis, haemorrhoids, thrombophlebitis, post-tonsillectomy and traumatic swelling, etc. and has shown a low side-effect profile.15,16,18-20

The current study was planned to evaluate the efficacy and safety of aescin compared to prednisolone in the management of symptomatic distal ureteral stones.

The prospective comparative study was conducted from April 2016 to December 2019 at Al-Yarmouk teaching hospital, Baghdad After approval from the Iraqi Board of Urology and the Iraqi Urological Association, Iraq, the sample size was calculated using OpenEpi calculation programme in the light of literature.21

Those finally included were patients aged >18 years with a single stone of a 4-10mm in size situated in the distal part of the ureter, and not having received any MET treatment. Patients with upper tract dilatation detected by U/S were also included.

All patients were prescribed tramadol hydrochloride 100mg injection at presentation for pain relief.

After being included in the study on the basis of evaluation and informed consent, the patients were randomised ( through alternating sequence ) into group 1 receiving aescin 120mg/day, group 2 receiving prednisolone 25mg/day, and placebo group 3. The treatment course lasted 10 days in each group.

All patients in the 3 groups were instructed to increase their water intake to at least 2 litres per day, to receive intramuscular (IM) tramadol injection for each severe colic attack, and to take oral tramadol 50mg for the milder pain episodes during the treatment course.

They were also instructed to record the number of severe colic episodes necessitate tramadol injection, the date of complete pain relief with no more need for analgesia, to monitor urine output for the passage of the stone, the date of the event, and to record any adverse effect of the treatment.

After the 10-day treatment course, the patients were re-evaluated through history, physical examination, the same laboratory tests, U/S and X-ray.

Outcome parameters were complete pain relief, number of severe colic attacks / number of analgesic ampoules used throughout the course, disappearance or decrease of the upper tract dilatation, stone expulsion rate and duartion, and adverse effects of the medications used. 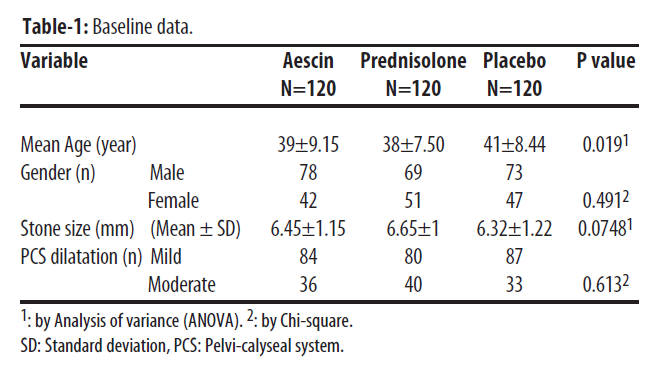 Post-treatment, intervention groups 1 and 2 showed significantly better outcomes on all parameters compared to the placebo group 3 (p<0.00001), while group 1 was more effective than group 2 (p<0.05). The only exception was stone expulsion rate for which the difference was significant between the treatment and placebo groups (p<0.05), but not between the two treatment groups (p>0.05) (Table-2).

No significant complications were encountered across the study period in all the 3 groups. Drug side-effects were only reported in the prednisolone group 13(11%); gastric upset 11(84.6%), rise in blood sugar level 6(46%), rise in blood pressure 5(38.5%), and moon-face presentation in 2(15.4%) patients. All of them completed the treatment course.

To the best of our knowledge, the current study is the first to evaluate the use of aescin alone in the treatment of patients with symptomatic ureteral stones.

As an MET, aescin has been mentioned briefly in a few studies, as it was used in combination with different non-steroidal anti-inflammatory drugs (NSAIDs), analgesics and a blockers without focus on its own role.4,22,23

The treatment doses in the current study were 120mg per day for aescin which was also used in earlier trials related to different aspects of aescin,16,19,20,24 and 25mg per day for prednisolone, which is the average dose used in other studies related to METs,12,13 because larger doses are usually associated with more adverse effects of steroids.

The treatment course was limited a 10-day period for a variety of reasons. From personal experience, which is in agreement with other studies, the major part of pain perception in ureteral stone disease usually occurs during the first 10 days of presentation.6,7,25 Besides, in accordance with the ethical committee recommendations, patients should not be left for more than 10-14 days without active intervention, especially those on placebo treatment. Also, for safety reasons, steroids should not be given to such patients for >10 days. And, finally, in the region of the current study, it is difficult to follow up patients for long periods, and since such studies depend mainly on patient-oriented data, it was necessary to make the treatment course as short as 10 days to ensure that patients returned at the end of the treatment course.

Stones included in the current study were >4mm and <10mm in their longest diameter, which was in accordance with the findings that MET can facilitate the passage of stones up to 10mm,2,9,13 and the fact that stones <4mm are generally less problematic and not effective in clarifying the beneficial role of MET over placebo.7,25

Since all patients in the current study had some sort of PCS dilatation, which may be related to the mean stone size encountered (6.47±0.18mm) or to the delayed presentation of patients, it was worthy to add checking of changes in PCS dilatation by U/S as one of the parameters of response to treatment.

In the present study, there was an obvious and early control of pain with significant decrease in the need for analgesia in the aescin and prednisolone groups versus the placebo group, and there was a significant disappearance or decrease in PCS dilatation in patients treated with these drugs compared to the placebo, which can be considered a good indicator of response to treatment.

Stone expulsion rates were comparable in the two active treatment groups (63% for aescin and 65% for prednisolone), but they were significantly higher than the rate in the placebo group (35%). This may be related to the efficacy of the drugs themselves, or possibly related to the stone sizes encountered in the study, as the larger the stone is, the more obvious is the difference in expulsion rate between METs and placebo.7,25

Nevertheless, the stone expulsion rates for all the 3 groups were relatively lower than in many other studies on MET.4-6,8,12,23,25This may be attributed to many factors, like the relatively larger stone size in this series (mean size 6.47mm versus 3.5-5.5mm in others)7,8,25 and the shorter treatment course (10 days versus an average of 28 days in others).5,6,8,25,26 In addition, the type of analgesic used in the current study in the 3 groups was tramadol hydrochloride, which is a pure central analgesic having no anti-inflammatory or anti-oedema effects, while in most other studies, some sort of Nonsteroidal anti-inflammatory drugs (NSAIDs) was used which has well-known additive anti-oedema effects.5-8,12,23,26

Lastly, the difference in stone expulsion rates may be related to the difference in mechanism of action between anti-oedema agents used in the current study, and ureteral smooth muscle relaxants, like a blockers and calcium channel blockers, which were used in the other studies with or without steroids.4-6,8,12,23,26

By using two anti-oedema agents, the major response achieved was basically the relief of obstruction, which is created by the oedema at the level of the stone, and the relief was represented by disappearance or decrease in PCS dilatation, relief of pain and the absence of complications.

Apart from the comparable stone expulsion rates in aescin and prednisolone groups, all other parameters of response were in favour of aescin, which is possibly due to the efficacy of the drug itself or the difference in doses, since in the prednisolone group, the dose and duration was limited due to its well-known adverse effects.

The mechanism of action as well as the high efficacy and safety of aescin in the treatment of ureteral stones was also mentioned in details in a study published in 1969 in which aescin was effectively used to facilitate ureteral stone extraction by Zeiss sling.24

Prednisolone group reported side-effects, like gastric upset, rise in the levels of blood sugar and blood pressure, which were also recorded in other studies.6,12,13

No adverse effects were reported by the patients receiving aescin throughout the study period. This high safety profile was in agreement with other studies on aescin with different uses. No oral toxicity or mutagenic or teratogenic activity and no immuno-suppression effect has been reported, indicating its excellent tolerability,15,16,18,20,24which may encourage its use for longer periods in the hope of improving the stone expulsion rate.

Use of anti-oedema agents, like steroids and aescin in the management of symptomatic distal ureteral calculi was found to be a valid and effective option, especially in patients with relatively large stones >6mm, and showing signs of obstruction with upper tract dilatation. With its superior efficacy in relieving pain, decreasing PCS dilatation, shortening the time for stone expulsion, and with its reasonable stone expulsion rate along with high safety profile, aescin can be considered a valid entity on the list of METs and it may even be used as a substitute for, over prednisolone in this respect.