Objectives: To investigate the association of high-sensitivity C-reactive protein and adiponectin with glycaemic indices in healthy, prediabetes and diabetes patients.

Method: The prospective cross-sectional study was conducted from June 2018 to February 2019 at the National Diabetes Centre and the Al-Kindi Specialised Centre for Endocrinology and Diabetes, Baghdad, Iraq, and comprised adult subjects of either gender who were normoglycaemic, those with impaired fasting blood glucose and glycated haemoglobin levels and newly-diagnosed patients of type 2 diabetes. Anthropometric measurements biochemical investigations were done for each subject. Data was analysed using SPSS 25.

Both lifestyle and genetic factors contribute to the development of type 2 diabetes mellitus (T2DM).1 Some factors are modifiable, such as obesity and diet, while others are non-modifiable, such as female gender, genetics advanced age. Furthermore, inflammatory markers play an important role in the pathogenesis of T2DM, such as adiponectin, tumour necrosis factor-alpha (TNF-a) alpha and interleukin-6 (IL-6).2

The inability of muscles, fatty tissues and liver to respond satisfactorily to the normal concentration of insulin is considered insulin resistance (IR). The inadequate insulin production from beta cells in the setting of IR is regarded as T2DM.2

During prediabetes, individuals have higher than normal blood glucose concentration, but not high enough to be given a T2DM diagnosis. Prediabetes is defined as either impaired fasting glucose (IFG) or impaired glucose tolerance (IGT). This depends on the blood test used to make the diagnosis.3 Prediabetes can be detected accidently during routine blood test at any age or during routine screening for T2DM at around age 45.4

Adiponectin is a protein hormone involved in fatty acid breakdown as well as in regulating the glucose levels. The hormone plays a protective role against cardio-metabolic disorders, such as metabolic syndrome, obesity, T2DM and non-alcoholic fatty liver disease (NAFLD).5,6 Mice studies showed that the combination of adiponectin and leptin might completely reverse IR.7

Genetic and enviromental factors signifcantly affect adiponectin conentration. The reduction in adiponectin concentration secondary to sedentaty lifestyle and/or high-fat diet might predispose the indivdual to the risk of IR and T2DM.7 Moreover, decreased levels of adiponectin also directly play a role in the development of atherosclerosis.7

High-sensitivity C-reactive protein (hsCRP) is an acute-phase reactant protein gets elevated in the blood during inflammations and infections. Additionally, hsCRP is also elevated in conditions such as coronary artery disease (CAD), surgery or trauma.8 Also, hsCRP is known to be a sensitive predictor of T2DM and CAD.9,10

Studies have shown that hyperglycaemia enhances the release of inflammatory biomarkers.11 Moreover, higher concentration of hsCRP has been reported in patients with metabolic syndrome.12

Like the other traditional risk factors, like family history, high cholesterol, high blood pressure (BP), obesity,14 hsCRP is growingly used as a biomarker of T2DM risk.15 Therefore, several studies have used hsCRP assay for identifying healthy individuals at the risk of developing T2DM.16,17 The hsCRP is a more sensitive test that can measure CRP concentration within the higher end of the reference range.18

The current study was planned to investigate the association of adiponectin and hsCRP with glycaemic indices in healthy, prediabetes and T2DM patients.

The prospective cross-sectional study was conducted from June 2018 to February 2019 at the National Diabetes Centre and the Al-Kindi Specialised Centre for Endocrinology and Diabetes, Baghdad, Iraq. After approval from the Iraqi Board of Medical Specialties, the sample was raised from among adult patients of either gender with T2DM taking metformin drug and duration of diabetes not more than one year, those with IFG, and normal healthy subjects. Those excluded were T2DM patients taking drugs other than metformin, pregnant or lactation women, those with renal, hepatic or cardiovascular diseases, acute or chronic infections, cancer, rheumatoid arthritis, and those who were either smokers or exercising >10 h/week. T2DM was diagnosed in line with the American Diabetes Association (ADA) guidelines.19 Normoglycaemia was defined as fasting blood glucose (FBG) <100mg/dl, IFG as FBG 100-126mg/dl) or glycated haemoglobin (HbA1c) 5.7-6.4, and T2DM as FBG >126mg/dl or HbA1c >6.5.19

All the groups were subjected anthropometric evaluation. Height (cm) was measured without shoes and was taken by tape measure. Weight was measured with light clothing and light shoes. It was taken by single special weight test device. WC measurements were made in the standing position using the standard technique defining the waist as the point midway between iliac crest and the costal margin (lower rib) and measuring it while the patient was in expiration and standing position.

After fasting for 10 hours, blood samples were collected from the participants. Centrifugation of the blood at 4000rpm for 5min at 4°C was done to separate serum samples which were stored at -20°C until the day of the analyses for total cholesterol (TC), low-density lipoprotein (LDL), high-density lipoprotein (HDL) and triglycerides (TG).

The sample size calculation was performed using G-Power 3.1.20 Data was analysed using SPSS 25. Data was expressed as frequencies and perentages as well as mean ± standard deviation, as appropriate. Scatter plot diagrams were used for interpretation. Unpaired student t-test was used for comparing independent mean values, while analysis of variance (ANOVA) was used to compare more than 2 variables. P<0.05 was considered statistically significant. 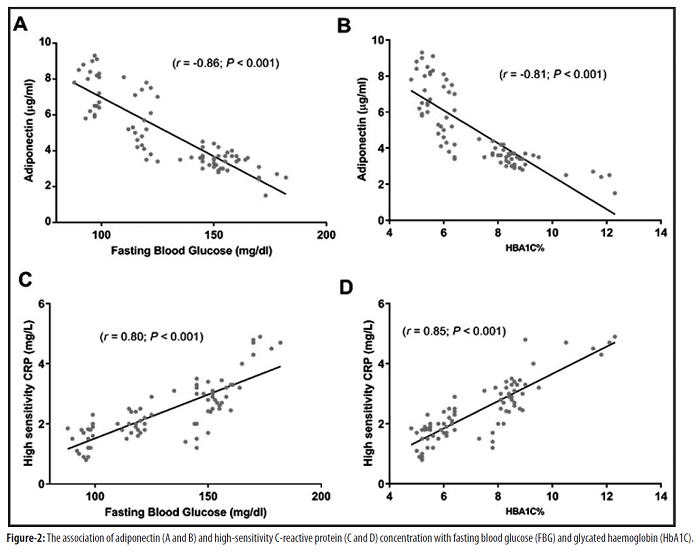 The current study showed a significant correlation of adiponectin with insulin sensitivity, indicating that adiponectin is a powerful prognostic marker for the T2DM development in IFG individuals.

Age among the three groups was not significantly different in the current study because age may affect the results of adiponectin and HsCRP.21

In IFG group, the level of adiponectin was less than in the control group due to increase in WC and BMI.22 It might be possible that low level of adiponectin would cause atherogenesis by triggering inflammation and consequently abnormalities in glucose and lipid metabolism.23 This chronic subclinical inflammation might be a predictor of both hyperglycaemia24 and cardiovascular disease.

Diabetic patients had the lowest level of adiponectin. This was due to higher dyslipidaemia and abdominal obesity compared to IFG and control groups, and this may cause IR.

The mechanisms by which adiponectin exerts its benefit on cardiometabolic mechanism are not fully understood, but this may be due to decreased inflammatory tone, improvement in insulin action, amelioration of lipotoxicity and interaction with fibroblast growth factor-21 (FGF-21).26

Paradoxically, few studies have reported higher concentration of adiponectin in patients with diabetes and severe IR. This might be due to insulin receptoropathy that occur in selected patients. Receptoropathy is caused by mutation in the receptors or by autoantibodies against the receptors.27

In the current study, the IFG group has lower adiponectin level than the control group, and higher than the T2DM group, but the significant was difference between the IFG and T2DM groups.

In the control group, there was significant correlation between hsCRP and BMI, but it was less significant than in IFG and T2DM groups, respectively. WC and dyslipidaemia were the apparent reasons as increase in abdominal obesity increases hsCRP.28

Higher concentration of inflammatory markers, like hsCRP, were observed in individuals with abdominal obesity. Furthermore, abdominal adipose tissue is regarded as a major source of inflammatory cytokinesIL-6 and TNF-a. These cytokines may further enhance hepatic hsCRP production.29 A study reported higher concentration of hsCRP and IL-6 in centrally obese individuals.30

In the current study, the level of hsCRP was higher in the IFG group than in the control group, and lower than the T2DM group.

The correlation of hsCRP and HbA1C was more than the correlation with FBG.31,32 Due to the inflammatory marker, the current findings are more related to IGT than IFG.

Acknowledgements: We are grateful to Professor Abbas Al-Musawi for his help.