Objective: To assess the effect of type I diabetes mellitus on cardiac systolic and diastolic functions in children and adolescent patients.

Conclusion: Subclinical alterations in myocardial function induced by type 1 diabetes may start in asymptomatic individuals, and these changes are accelerated with poor glycaemic control and longer duration of diabetes.

Asymptomatic children and adolescents with type 1 diabetes mellitus (T1DM) show evidence of subclinical diastolic dysfunction that is correlated with the degree of metabolic control and duration of diabetes.1 Several studies have established diabetes as a strong risk factor for cardiovascular morbidity and mortality, especially in females.2 This increased risk cannot be explained only by the high prevalence of comorbidities, such as coronary heart disease (CHD) or arterial hypertension (HTN) in diabetes.3 This particular form of heart disease in the absence of clinically detectable atherosclerosis and/or coronary artery disease (CAD) has been termed diabetic cardiomyopathy.4 It is a common but frequently unrecognised pathological process in asymptomatic diabetic patients.5 It can affect diastolic function, systolic function, or both.6 A feature of the diabetic cardiomyopathy is the stiffening of the myocardial tissue, resulting in diastolic dysfunction, increased preload and increasing filling pressures.7

Hyperglycaemia is the main aetiological factor in the development of diabetic cardiomyopathy. It increases the levels of free fatty acids and growth factors and promotes excessive production and release of reactive oxygen species, which induces oxidative stress (OS) leading to cardiomyocytes apoptosis.8 Other risk factors include insulin resistance (IR), HTN, dyslipidaemia and obesity.9

The current study was planned to evaluate the effect of T1DM on cardiac systolic and diastolic functions in children and adolescent patients, and to assess its correlation with the duration and control of diabetes.

The case-control study was conducted from January 1 to December 31, 2017, at Child's Central Teaching Hospital, Baghdad, Iraq, which is one of the referral centres for childhood endocrinopathies in the capital city. The patients were randomly selected from among those attending the paediatric diabetes outpatient clinic. Age-matched controls comprised healthy individuals with no evidence of cardiovascular disease by history, physical examination, electrocardiogram (ECG) and echocardiography. The study protocol was approved by the hospital scientific- ethical committee.

Those included were aged 5-18 years with duration of T1DM >3 years who were asymptomatic with no clinical evidence of heart failure, and having regular cardiac rhythm and normal blood pressure (BP). Also, the patients had no evidence of congenital heart diseases or HTN, or other endocrine and systemic diseases except T1DM, and having no diabetes-related complications, like nephropathy, retinopathy or neuropathy.

Those excluded were patient with a history of smoking, cases with abnormal BP readings, abnormal renal function, irregular rhythm on ECG, and cases with valvular or congenital heart diseases discovered incidentally by echocardiography. Also excluded were those with LVEF < 55%, or any regional wall motion abnormality, and individuals who were lost to follow-up.

After taking informed verbal consent from each individual and/or parents, the participants were subjected to detailed history and clinical examination, which included complete cardiovascular examination and measurements of weight, height, body surface area (BSA) and body mass index (BMI), ECG, laboratory investigations, including glycated haemoglobin (HbA1c) and renal function test, and echocardiography. Cases with diabetes were then divided into HbA1c <7.5% >7.5% subgroups, and T1DM duration <7 years and >7 years subgroups. Informed verbal consents were obtained from each individual in the study population and/or their parents.

Data was analysed using SPSS 25. Data was expressed as mean, standard deviation, range, frequencies and percentages, as appropriate. Two-tailed independent t-test was used to compare the continuous variables between the groups. P<0.05 was considered significant. 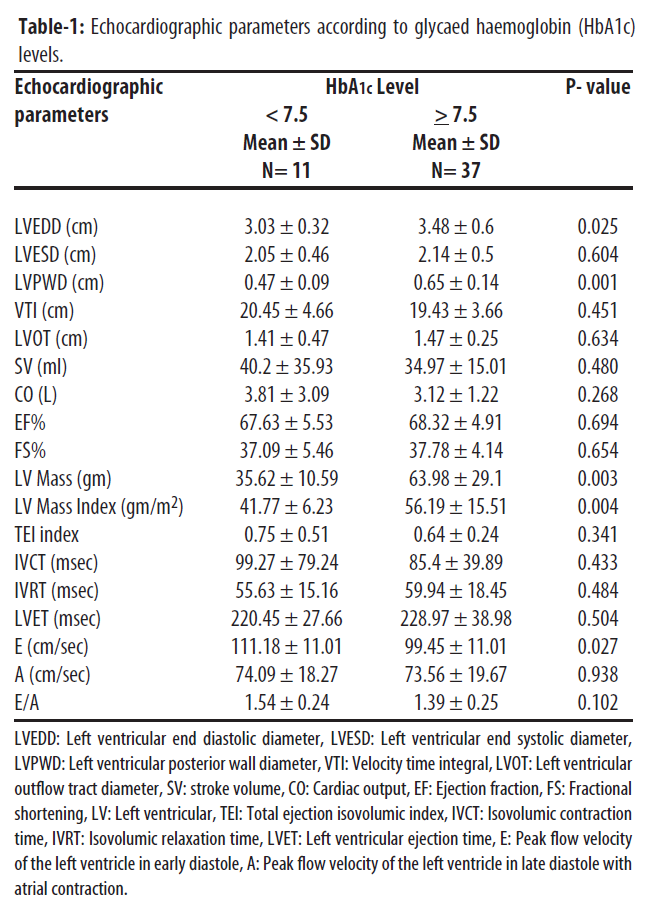 The current isovolumic relaxation time (IVRT) was significantly higher in the cases than the controls, indicating early changes of LV diastolic dysfunction in diabetic patients. This is in line with Fattouh et al.,10 in contrast with Abd-El Aziz et al.11 The current study also showed that the mean E wave was significantly lower in the cases than the controls, and the finding is similar to literature.11,12

The E/A ratio was significantly lower in the cases than the controls, which indicate that there is a diastolic dysfunction in diabetic patients. The finding is in accordance with some studies,3 while others13 found no significant differences probably because of the longer duration of T1DM in the current study. There were non-significant differences between the cases and the controls regarding LV diameters, stroke volume (SV), cardiac output (CO), total ejection isovolumic index (TEI), ejection fraction percentage (EF%) and fractional shortening (FS), which are similar to earlier results.11,13-15These results indicate that there is no overt clinical heart failure in diabetic patients.

Concerning LV mass and LV mass index, there was non-significant differences between the cases and the controls, which is similar to the results of Salem et al.14 and Labombarda et al.,16 but different from the results obtained by Hodzic et al.15 This could be attributed to the significantly higher weight and BMI in diabetic patients taken by Hodzic et al,15 while in the current study there was no significant differences in these parameters between the groups.

Regarding echocardiographic findings, the current study showed significant effect of poor glycaemic control on LV and E wave. Abd-El Aziz et al.11 and Hodzic et al.15 found no significant association between glycaemic control and echocardiographic parameters, while Salem et al.14 found that HbA1c correlated positively with peak flow velocity of LV in late diastole with atrial contraction (A wave) and negatively with E/A ratio. These differences could be attributed to variation in sample sizes, general characteristics, and that single HbA1c reading may not be sufficient to reflect the overall glycaemic control.

TEI and IVCT were significantly higher in patients with duration of T1DM >7 years. There was no comparable study found regarding these parameters. Besides, all other echocardiographic parameters had no significant association with T1DM duration, which is closer to earlier findings.6,10,13,15

The limitation of the current study is that the sample size was not scientifically calculated, and that can cause a decrease in the power of the study.

Subclinical alterations in myocardial function induced by T1DM may start in asymptomatic individuals, and these changes are accelerated with poor glycaemic control and longer duration of T1DM.

Acknowledgment: We thank Dr. Firas S. Abdul-Kareem for his support, and all the children and their parents who participated in the study.