Objective: To assess the risk factors associated with diabetes on parameters of diabetic nephropathy represented by albuminuria level.

Diabetes mellitus (DM) is a chronic metabolic illness associated with severe or even life-threatening complications. DM prevalence represents a global challenge, as in 2019 the total number of diabetics reached 463 million, and the number is expected to continuously and rapidly expand to reach up to 700 million in 2045.1 This spike in prevalence globally is associated with increasing mortality and morbidity related to diabetic complications.2

Diabetic nephropathy (DN) is one of the commonest complications of DM and is regarded as the leading cause of end-stage renal disease (ESRD).3 An early sign of DN would be microalbuminuria, which can be measured as concentration of albumin in 24-hour urine, and expressed as a ratio of urinary albumin to creatinine (A/C ratio).4 The pathophysiology of DN is complicated due to the dysfunction of the glomerular basement membrane that facilitates the excretion of albumin in urine. The amount of urinary albumin is considered normal with albumin in urine <30mg per day. Values between 30mg and 300 mg per day represent microalbuminuria and >300mg per day indicates macroalbuminuria.5 The importance of early detection of microalbuminuria is vital as in this stage the deterioration of DN can be stopped or even reversed by achieving good glycaemic management.

Diabetic patients suffer from several metabolic abnormalities that collectively result in progressive inflammation and tissue damage. Factors, such as increased intracellular glucose, glycation of proteins, hexosamine pathway, oxidative stress (OS) and others have been implicated.6 Hyperglycaemia per se can cause microangiopathy and thickening of the capillary basement membrane due to a direct reaction with the arterial wall to form glycation of wall protein that leads to the thickening of the capillary basement membrane and increased vascular permeability.7 The severity and duration of hyperglycaemia are detrimental factors of DN. Studies showed a strong correlation between bad glycaemic control and progression of renal disease and deterioration of kidney functions.8,9 Furthermore, data from a large trial showed that good glycaemic control could reduce and even prevent the transition of microalbuminuria to ESRD.10

The current study was planned to analyse the various factors in addition to the effects of glycaemia on the parameters of DN.

The case-control cross-sectional study was conducted at the National Diabetes Centre for Treatment and Research, Al-Mustansiriyah University, Baghdad, Iraq, from October 2019 to March 2020. After approval from the institutional ethics review committee, the sample size was calculated using Open epi sample size calculator15 based on 90% power to detect an effect of 10%, with a significance level of 0.05 and confidence level of 95%. 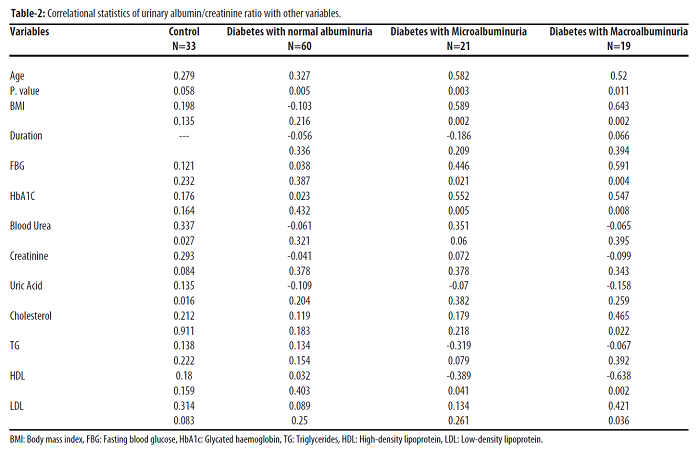 Duration of type 2 DM (T2DM), urinary A/C ratio, FBG and HbA1c were also analysed and compared among the groups (Figure). 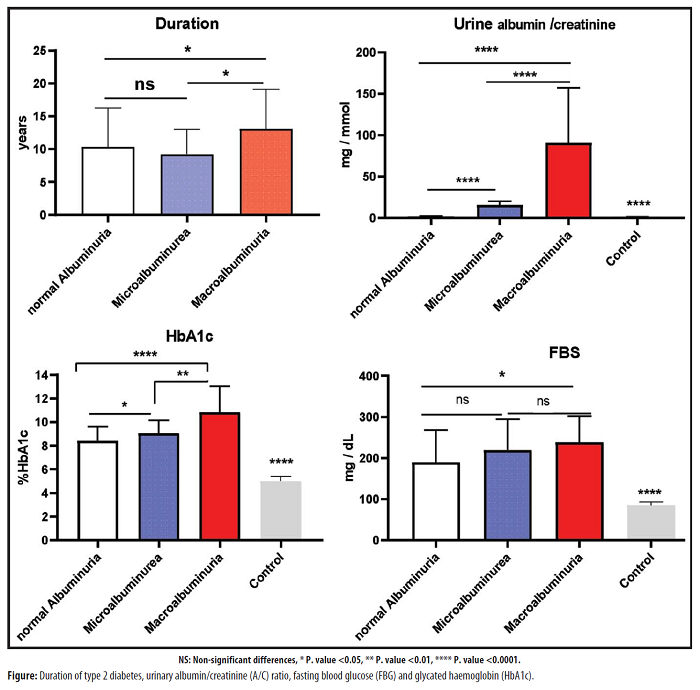 A large number of diabetic patients suffer from DN which represents a leading cause of ESRD. In this study, 40% of T2DM patients had some degree of DN; 21% had microalbuminuria and 19% had macroalbuminuria, as detected by elevated urinary C/A ratio. These results are in line with earlier results, Rao.16 There was a male preponderance among those having DN which is consistent with studies.17

In T2DM patients, the occurrence of albuminuria increases with age, with elderly diabetic individuals at increased risk for ESRD.18 The results of the current study showed that there was no difference in mean age in the three T2DM groups. However, correlation analysis showed strong association of increasing albuminuria with age within the groups (Table-2).

The duration of diabetes is usually associated with the development of a chronic complication. In this study, patients with macroalbuminuria had significantly higher duration than those of the other groups. No correlation was observed in all the study groups. These results are similar to earlier ones, Song, Jeong.19

In the current study, there was a significant association between BMI and albuminuria. a study found that BMI was one of the factors positively related to renal dysfunction.19

Long duration of abnormally high glucose and lipid disarrangements are regarded as root causes for diabetic complications, including DN.22 The recorded lipid abnormalities that seem to be associated with increased risks of albuminuria are high levels of TC, TG and LDL, with consistently low HDL.12

No significant difference was observed in mean TG values between microalbuminuria and normal albuminuria groups, but TG significantly increased in the macroalbuminuria compared to normal albuminuria group. Correlation analysis showed no association of changes in TG level with increasing urinary A/C ratio in the study groups. Correlation analysis showed findings different from what has been reported earlier by Tien, Tu.23 This variability could be attributed to small sample size in the current study.

HDL analysis of the current study was consistent with previous researches.12,23

T2DM is a long-lasting disease which is complicated by DN. Different variables had effect on or correlation with the degree of albuminuria. Early detection of microalbuminuria might decrease the risk of progression of renal problem by adequate diabetes management.

Acknowledgments: We are grateful to the teaching staff of the Department of Chemistry and Biochemistry, College of Medicine, Mustansiriyah University, for their support.