Objective: To assess the metabolic effects of primary hypothyroidism (PHT) on the leptin (LP), adiponectin (ADP) level and leptin adiponectin ratio (LAR), with identification of the beneficial effects of L-thyroxine (LT4) therapy on these parameters.

Methods: This case-control study was conducted at the Department of Pharmacology, College of Medicine, Mustansiriyah University, Baghdad, Iraq, from July to October 2019. This study included 62 PHT patients, of whom 27 were newly diagnosed and 35 were on LT4 therapy. There were 28 healthy controls. Anthropometric, lipid and pressure profiles were evaluated along with estimation of TSH, T3, T4, LP and ADP serum levels. SPSS version 20.00 was used for data analysis.

Primary hypothyroidism (PHT) is an endocrine disorder due to failure in the thyroid gland to produce thyroid hormones (THs), which are important for regulating the body metabolism. Consequently, PHT leads to obesity, fatigue, anorexia, hypertension and hyperlipidaemia.1 THs are synthesized and release from the thyroid gland under control of thyroid stimulation hormone (TSH), and thyroid releasing hormone (TRH) which are produced by the anterior pituitary gland and hypothalamus respectively.2 PHT is subdivided into subclinical hypothyroidism, which is associated with high TSH serum level and normal level of THs, and overt hypothyroidism, which is characterized by high TSH serum levels with low T4 (thyroxine) and T3 (triiodothyronine) serum levels.3

The prevalence of PHT is 1-2% worldwide, which is more common in older women compared to young and male individuals.4 Levothyroxine sodium (LT4) is considered as the drug of choice in the management of PHT as this drug is safe, effective and well tolerated by patients and has less side effects. LT4 acts as endogenous thyroxine and after oral administration is metabolized to an active form, T3 by the action of iodothyronine deiodinase enzyme.5

PHT is linked with metabolic disorders due to dysregulation of adipose tissue adipocytokines like leptin and adiponectin, which have a potential role in the progression of PHT induced-cardio-metabolic disorders.6

Leptin (LP) is a hormone derived from adipose tissue and acts as a peripheral signal for the central nervous system (CNS). LP binds to the specific receptor in the hypothalamus to regulate food intake and energy homeostasis, leading to reduction in body weight and activation of energy expenditure.7 There are mutual interactions between THs and LP in the regulation of body weight and energy expenditure. LP serum level is correlated positively with the body fat; body mass index (BMI) and TSH serum level.8

The correlation between THs and ADP is that both having various effects on the lipid and glucose metabolisms and the fact that both THs and TSH receptors are expressed on the adipose tissue.10 THs are positively correlated with ADP serum levels; thus low ADP serum levels are suspected to occur in patients with PHT. Therefore, inflammatory reactions and neuro-metabolic disorders in PHT may be due to the reduction of ADP serum levels.11

The objectives of the present study was to study the potential effect of LT4 replacement therapy on the ADP and LP serum levels as well as leptin-adiponectin ratio (LAR) in patients with PHT.

This case-control study was done from July to October 2019 in the Department of Clinical Pharmacology, College of Medicine, AL-Mustansiriyah University, affiliated with the Al-Yarmouk Teaching Hospital, Baghdad-Iraq. The study was approved by Scientific and Ethical Committee Editorial Board, College of Medicine, AL-Mustansiriyah University Baghdad-Iraq. The sample size was calculated according to the population size regarding 95% confidence interval and 5% marginal error.

This study included 62 PHT patients of whom 27 were newly diagnosed patients whereas 35 patients with PHT were on LT4 therapy (n=35). There were 28 healthy controls. The blood samples were collected from all participants after an overnight fast to determine TSH, T3, T4, lipid profile, leptin and adiponectin serum levels.

The inclusion criteria were age more than 18 years and confirmed cases of PHT by thyroid function test.

Ten milliliters of blood samples were withdrawn through vein puncture procedure via a sterile syringe (5 ml), after an overnight fasting from all recruited patients and healthy controls. The blood samples were stored in gel tubes and centrifuged at 3000/ rpm and then stored at (-20 C°) till time of analysis.

Data was analyzed using SPSS 20, and presented as mean ± standard deviation (SD) and the variables were tested by using unpaired student t-test between the controls and the treated groups. One way analysis of variance (ANOVA) with post-hoc test was used to scrutinize the significance of differences among the groups. Level of significance was regarded when P<0.05. 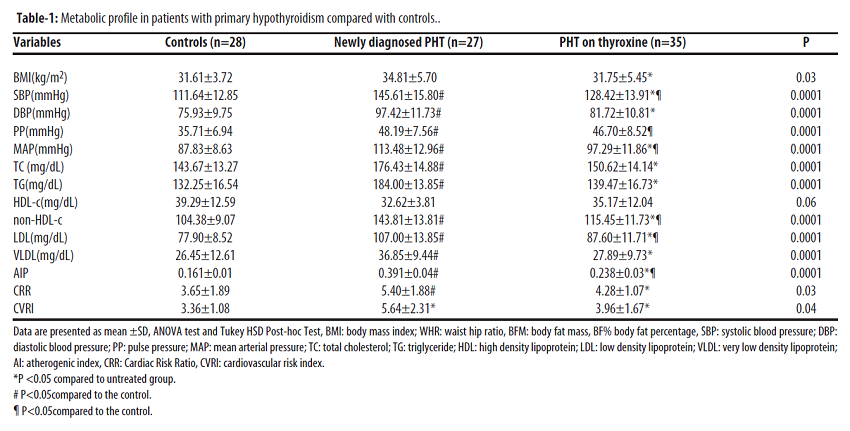 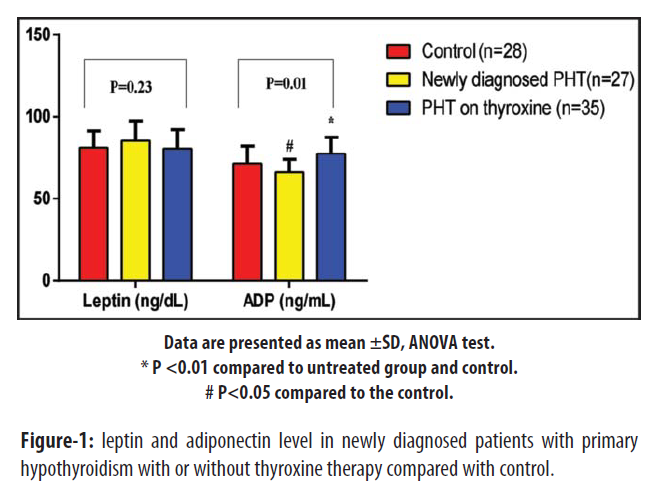 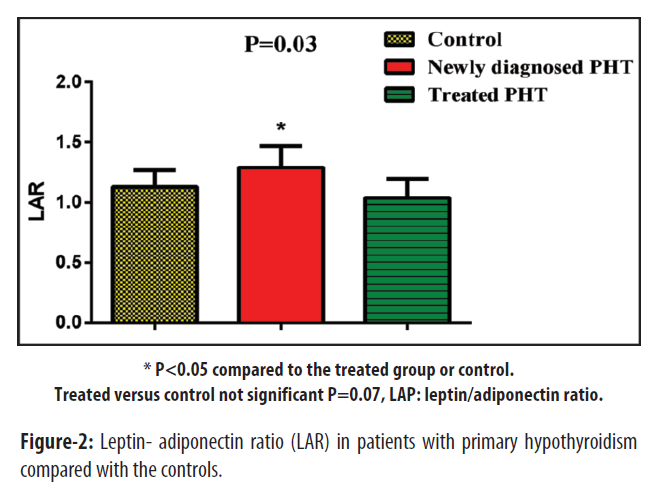 In the present study LT4 therapy improved TSH and THs levels, both T3 and T4 serum levels were normalized with significant reduction in serum TSH levels as LT4 is regarded the prototype first line therapy in the management of PHT.4 PHT causes an increase in BMI, as PHT is highly correlated with the development of obesity.11 However, our data showed that, there was a significant difference in BMI, which was higher in newly diagnosed as compared to patients on LT4 therapy and healthy controls. This has been documented in a recent study that reported the association between PHT with central adiposity and high body fat mass, which is reversed by LT4 therapy.14 In addition, our study showed a positive association between PHT and hypertension, thus SBP, DBP, PP and MAP were higher in the newly diagnosed patients as compared to the patients on LT4 therapy. This was shown by a previous meta-analysis study, which demonstrated that LT4 therapy reduces systemic hypertension.15 Different studies point out that systemic hypertension is one of the most common secondary complication of PHT, since different pathological factors contribute into the pathogenesis of hypertension in PHT including development of arterial stiffness, reduction of vascular elasticity, peripheral vasoconstrictions due to down-regulation of b2 adrenoceptors and un-opposing effect of a1 adrenoceptors. All these factors are reversed by LT4 therapy.16

Moreover, findings of our study confirmed that newly diagnosed patients with PHT were associated with hyperlipidaemia, which was mitigated following LT4 therapy. However, HDL-c serum level did not differ significantly in the newly diagnosed patients with PHT compared with PHT on LT4 therapy. It has been reported that PHT induced-hyperlipidaemia develops due to reduction of LDL receptors and induction of lipogenesis.17 Therefore, LT4 therapy improves lipid profile due to degradation of LDL-c and increasing the expression of LDL-c receptors. These facts might explain the occurrence of hyperlipidaemia in patients with PHT which is ameliorated by LT4 therapy as in the present study. Indeed, high TSH serum, low THs level and associated hyperlipidaemia contribute mutually into the acceleration and augmentation of cardiac risk ratio, cardiovascular risk index, atherogenicity and cardiovascular complications. Definitely, high TSH serum levels lead to induction of endothelial dysfunction, impairment of cardiac contractility and coronary heart disease independent of THs levels. This effect is mediated by cardio-myocyte TSH-receptors. Thus, obesity, hypertension, hyperlipidaemia and cardiovascular complications are associated with reduction in ADP serum levels and increased LAR which contributes to the metabolic syndrome.18

Both LP and ADP are thought to play imperative roles in the regulation of hypothalamic-pituitary (HPT) axis and metabolic homeostasis. LP acts on the hypothalamus, increased food intake and positively correlates with the degree of body obesity.19 On the other hand, ADP is involved in the regulation of metabolic homeostasis through activation of fat oxidation and reduction of fatty acids and triglycerides. Nevertheless, ADP level is paradoxically reduced in patients with obesity and metabolic syndrome.20 Therefore, LAR serves as a metabolic biomarker superior to ADP or LP alone in the assessment of metabolic profile in PHT.

According to the present data, LAR was higher in newly diagnosed patients with PHT compared to PHT on LT4 therapy, and there was no significant difference among controls and patients on LT4. A previous cross-sectional study indicates that, high TSH levels in euthyroid individuals with metabolic syndrome was associated with an increase of LAR, which is a proposed biomarker for adipocyte dysfunction and the development of metabolic abnormalities.23 Therefore, high LAR in PHT indicates underlying metabolic disturbances which was observed in the current study. LAR was significantly correlated with high TSH serum levels. High LP and low ADP serum levels in the present study were correlated with hyperlipidaemia and atherogenic index. Thus, high LAR in the present study reflects PHT induced-cardio-metabolic disturbances.24Following LT4 replacement therapy, LAR was reduced to a value comparable to that of healthy controls. This improvement in LAR might be due to the reduction of TSH serum levels and amelioration of cardio-metabolic profile as documented by a recent study.25

The present study had several limitations which included a small sample size, and pro-inflammatory cytokines that augmented in PHT not being evaluated. Though, the present study provided a clue in connotation between PHT patients and LAR. Large prospective clinical trials are warranted in this regard to observe and confirm the dose-dependent effect of LT4 therapy on LAR in patients with PHT.

Acknowledgment: To the all members in College of Medicine, Al-Mustansiyria University

Are alterations in melatonin and inflammatory cytokine serum levels linked with recurrent abortion in pregnant women with acute toxoplasmosis: The interacted nexus