Objectives: To demonstrate the differential effect of atorvastatin and rosuvastatin on the Intercellular adhesive molecule 1(ICAM-1) in acute ischaemic stroke (AIS) patients.

Conclusion: ICAM-1 is regarded as a surrogate biomarker of AIS in patients with underlying poor cardio-metabolic profile. Both atorvastatin and rosuvastatin are effective in attenuation of AIS measured by lowering of ICAM-1 serum levels.

Different studies identified that hypo-perfused and electrically nonfunctional part of the brain termed ischaemic penumbra in AIS is converted to irreversibly injured tissue over time (known as ischaemic core), but at a rate differs considerably between individuals.3 However, with a fast reperfusion, this penumbral region can be salvaged and can recover completely. This landmark finding formed the rational for the reperfusion therapies that have transformed outcomes for patients with ischaemic stroke since the first positive trial of stroke thrombolysis.4

Although different mechanisms are involved in AIS pathogenesis, increasing evidence shows that ischaemic injury and inflammation are the central mechanisms in the pathogenesis and progression of AIS. AIS triggers ischaemic cascades, which ultimately results in vascular injury, damage of blood brain barrier (BBB), brain oedema, and permanent cerebral injury.5

It has been reported that different biomarkers such as brain natriuretic peptide may reflect underlying cardio-metabolic derangements in patients with AIS.6

Intercellular adhesive molecule 1(ICAM-1), also recognized as cluster of differentiation 54 (CD54), is a trans-membrane glycoprotein belonging to immunoglobulin super-family of adhesive molecules, which is important in cell-cell interactions of immunological response.7 ICAM-1 over-expression is linked with different disorders including; chronic metabolic diseases, inflammatory illnesses, and malignancies. ICAM-1 triggers BBB disruption during AIS via the recruitment of leukocytes toward CNS.8

Statins inhibit de novo cholesterol biosynthesis through inhibiting the activity of hydroxyl-methyl-glutaryl-coenzyme-A (HMG-Co-A) reductase, a rate limiting enzyme in cholesterol biosynthesis.9 The interruption of mevalonate pathway by statins is with the pleiotropic effects of statins. In addition, administration of statins during AIS may avert stroke sequence and relapse.10

Therefore, the aim of the current study was to demonstrate the differential effect of atorvastatin and rosuvastatin on ICAM-1 in patients with AIS

This case-control study was completed in the Department of Clinical Pharmacology and therapeutic, College of Medicine, AL-Mustansiriyah University, in collaboration with the Al-Yarmouk Teaching Hospital, Baghdad-Iraq from May to July, 2020. This study was permitted by Scientific Committee and Institutional Review Board, College of Medicine, AL-Mustansiriyah University.

A total of 88 participants (66 patients with AIS and 22 healthy controls) were involved in this study. The sample size was calculated according to the population size regarding 95% confidence interval and 5% marginal error.

The selected 66 patients and healthy controls were divided into the following groups;

Informed verbal consent was obtained from all recruited patients and healthy controls before starting of the study.

ICAM-1 serum level was measured by utilizing an ELISA kit (MyoBio source, U.S.A.) on the basis of sandwich method.

Demographic characteristic: In the present study 66(75%) of contributors were patients with AIS compared to 22(25%) healthy controls with a mean age of 67.81±12.84 years and approximately equal male-female ratio (51.13-48.86%). In addition, 30(45.45%) of patients were cigarette smokers. The duration of AIS was short (days), and most of the patients presented with motor deficits and paralysis 32(48.49%). Besides, AIS patients had different cardio-metabolic disorders including; hypertension, dyslipidaemia, ischaemic heart disease, previous cerebrovascular accidents, and other neurological disorders. Regarding the associated and current pharmacotherapy,44(66.67%) patients were on statins therapy compared with 22(33.37%) patients not on statins therapy (Table-1). 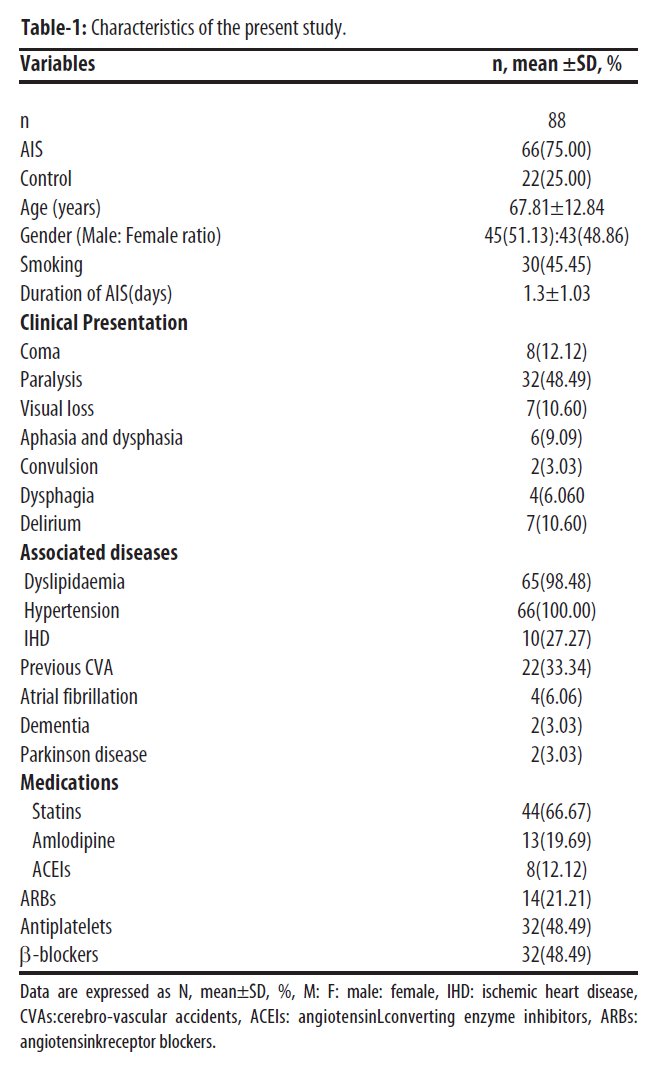 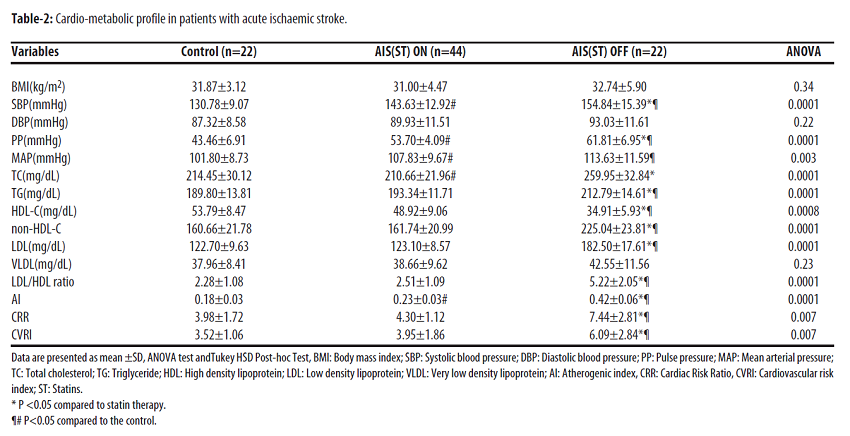 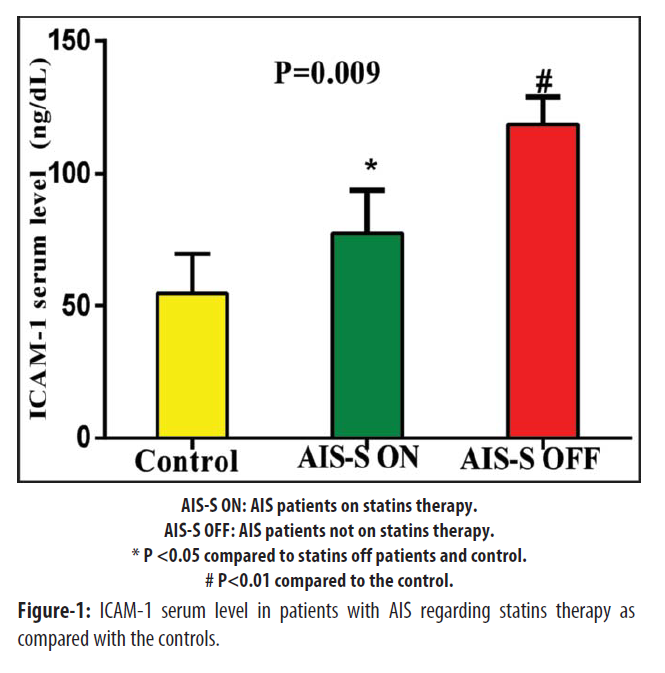 Differential effect of statins therapy on ICAM-1 serum levels of AIS patients: In the current study, there was differential effect of statins therapy on the ICAM-1 serum level which was non-significantly higher in patients with AIS on rosuvastatin (72.93±9.03) as compared with patients with AIS on atorvastatin (70.61±10.94), (P=0.44) (Figure-2). 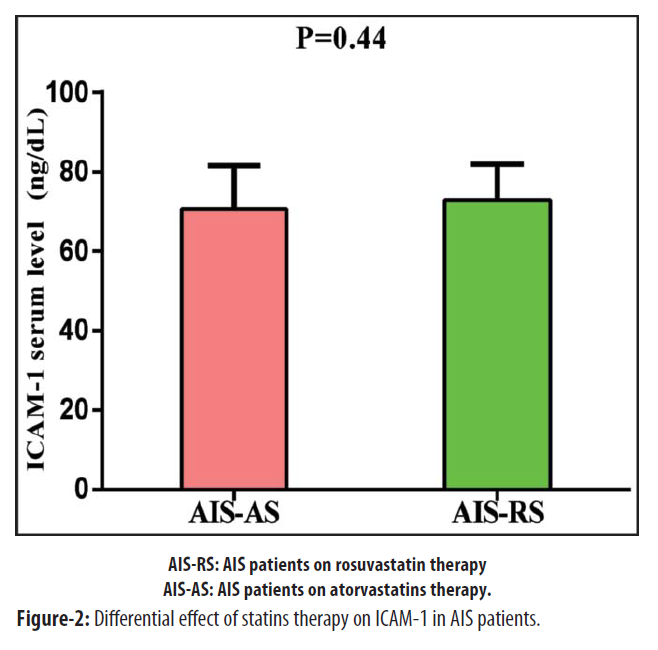 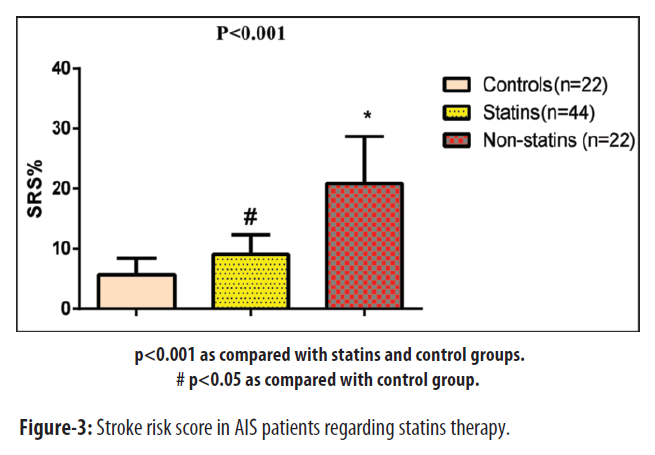 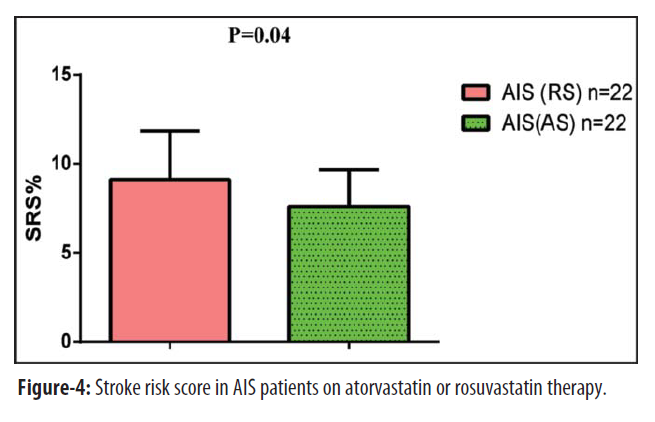 AIS is one of the most important causes of mortality and disability in the developing countries. Of note, AIS is a dynamic process of several reactions, such as immunological response, oxidative stress, reactive gliosis, and dysfunction of homeostatic system.14

Studies suggest that inflammation has a role in the pathogenesis of AIS. Neuro-inflammation exacerbates the injury by inducing cell death, which also plays an advantageous role in promoting of cells recovery.15

ICAM-1 is a cell-bounded glycoprotein that participates in inflammation through interacting with lymphocytes, since it is expressed in astrocytes, endothelial cells, and microglia. As well, ICAM-1 affects BBB integrity and might be a useful biomarker for post-stroke inflammation.16

Kurkowska et al., proposed that ICAM-1 may act as an early biomarker for endothelial disruption in the acute phase of AIS.18

In the present study, ICAM-1 level was reduced in statins-On AIS patients compared to statins-Off AIS patients. However, there was no significant association between statins and ICAM-1serum levels in patients undergoing percutaneous cardiac intervention.19

Therefore, both atorvastatin and rosuvastatin improve endothelial inflammatory changes through modulation of inflammatory adhesion molecules in patients with AIS.

However, SRS was more linked with ICAM-1 in AIS patients not on statin therapy. This correlation gives a clue about the association between stroke risk and inflammatory/pro-inflammatory axis. It has been reported that poor cardio-metabolic risk factors are associated with chronic inflammatory reaction, which in turn increase the risk of AIS.24On the other hand, statins therapy reduces dyslipidaemia and systemic hypertension, thereby reducing neuronal damage in patients with AIS.25 Thus, SRS in the present study was less correlated with the studied biomarkers in AIS patients on statins therapy.

The present study had several limitations including; small sample size and pro-inflammatory cytokines like tumour necrosis factor alpha (TNF-a), which affects both cardio-metabolic profile and AIS was not measured. However, the present study provided evidence in association between AIS patients and ICAM-1 serum level. Enormous prospective and clinical trial studies are warranted in this regard to confirm the association between AIS and ICAM-1 serum level.

ICAM-1 is regarded as a surrogate biomarker of AIS in patients with underlying poor cardio-metabolic profile. Both atorvastatin and rosuvastatin are effective in attenuation of AIS measured by lowering of ICAM-1 serum levels.

Acknowledgment: To the all members in College of Medicine, Al-Mustansiyriah University.

Are alterations in melatonin and inflammatory cytokine serum levels linked with recurrent abortion in pregnant women with acute toxoplasmosis: The interacted nexus