Prevalence of HIV among pregnant women in three HIV-affected districts in Sindh, Pakistan

Conclusion: Considering several HIV sub-epidemics in Larkana in the past decade, HIV infection among pregnant women has remained low in Larkana and adjacent districts.

Over the past two decades, Pakistan has seen a steady and alarming increase in human immunodeficiency virus (HIV) infections.1,2 The country is among the nations reporting the highest growth in HIV infections globally, with an average 18% rise in HIV infections in the past two decades and 45% since 2010.2-5 The HIV incidence increased from 0.08 to 0.12 per 1,000 persons from 2010 to 2019 in the general population.6 HIV-associated mortality also increased by 11% in the same period.6

Currently, Pakistan has an estimated 0.19 million HIV cases.5 The country joined the nations with a concentrated HIV epidemic in 2005 when 10.8% of the persons who inject drugs (PWID) were found HIV positive in the first round of second-generation HIV surveillance.7-9 Pakistan has shown a consistent increase in HIV since then.10 The PWIDs' HIV infection rate increased from 11% in 2005 to 27% in 2011 and 38% in 2019.11,12 Pakistan also has about 7.5% of hijras (transgender) and 5.6% of male sex workers (MSM) who are HIV-positive.12 On the other hand, female sex workers (FSW) are the only key population group with HIV infection below a concentrated epidemic rate of 5%.11

A systematic review of HIV outbreaks from 2000-2019 identified seven outbreaks, of which more than 50% occurred after 2016.13 The outbreaks involved key populations and low-risk populations.14 A recent HIV outbreak in district Larkana, Sindh, infected more than 700 children.15 A study among patients attending a tertiary care facility in rural Punjab found a rise in HIV infection from 1.3% to 13.4% in six months.16 Another survey of 8,000 asymptomatic blood donors in the province Khyber Pakhtunkhwa found 0.73% of the donors to be HIV-infected.17

A consistent HIV infection rate of >1 among pregnant women marks a generalised HIV epidemic.18 A fast-rising epidemic among key populations and HIV-associated social and religious stigma and discrimination make Pakistan particularly vulnerable to a generalized epidemic.19 The social milieu of the country also predisposes it to a rapid rise in HIV infections. Pakistan has a close-knit family system. About 38% of the PWID are married, and more than 60% live with their family.20 The social and sexual interactions of PWIDs with their spouses and intimate partners make the general population more at risk of contracting HIV infection.

District Larkana is the worse HIV-affected district of Pakistan. It reported most HIV outbreaks in the country since 2000.11,13,15,21,22 A paediatric outbreak in a district's taluka Ratodero left more than 700 children and more than 30 adults infected with HIV.15,23 A taluka is an administrative unit of the district. A rising frequency of HIV sub-epidemics in the district underscores a need to track HIV spill over in the low-risk and general population. However, the district lacks a community-based prevalence study to determine the spread of HIV among the general population. This community-based study was conducted to determine the prevalence of HIV infection among pregnant women in taluka Ratodero of district Larkana and two adjacent talukas including taluka Garhi Yasin in district Shikarpur and taluka Sajawal in district Kambar Shahdadkot, in Sindh, Pakistan.

This community-based cross-sectional survey was conducted among pregnant women in the three talukas of rural Sindh: Ratodero, Garhi Yasin, and Sajawal, from October 16, 2020 - December 23, 2020. The survey was part of the 'Community Engagement Programme' implemented by Bridge Consultants Foundation as a part of a comprehensive HIV outbreak response plan. The National Acquired Immunodeficiency Syndrome (AIDS) Control Programme, Sindh AIDS Control Programme, United Nations agencies, and academic institutions provided input and support in developing and implementing the Programme.

The project team worked with Community Health Workers (CHW) also known as Lady Health Workers (LHW) in Pakistan, and community leaders to develop a list of names and addresses of pregnant women in three talukas during the study period. The CHWs are government employees and live in the same community for which they work.2 Pregnant women who knew their HIV status were excluded. The outreach teams, comprising of interviewers, trained counsellors, and paramedics, interviewed 1,157 pregnant women who consented to participate in the study using a semi-structured questionnaire, and were tested for HIV infection. Husbands of HIV-positive women were also tested.

The study captured pregnant women's sociodemographic, economic, and health characteristics, including the HIV status. The variables included age, education, employment, number of children (alive or dead), home or hospital delivery, registration for facility-based antenatal care, antenatal trimester, history of blood transfusion, and HIV test result. The women were also questioned if their husbands ever took an HIV test and about their husbands' employment and monthly salary.

The data were entered in Microsoft Excel and analysed in SAS version 9.4. Percentages were calculated for categorical variables and the mean ± standard deviation for continuous variables. Because of small numbers, husbands working as farmers, labourers, tailors, carpenters, shopkeepers, small business workers, drivers, and molvis (a religious teacher/scholar) were combined into a single category — self-employed labourers.

The study received ethical approval from the Ethical Research Committee of Bridge Consultants foundation. Informed consent was obtained from participants. Privacy and confidentiality of data were maintained. All HIV-positive women were linked with the HIV care centre. 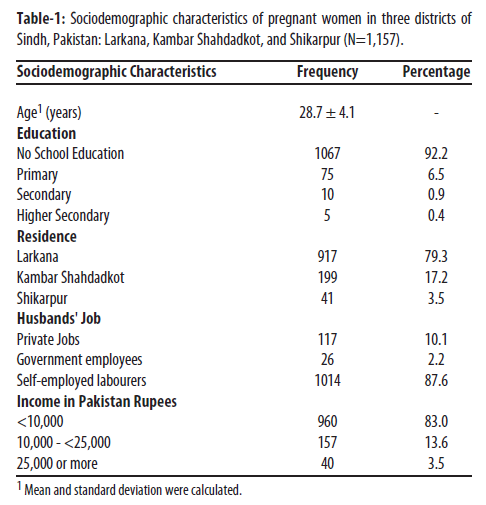 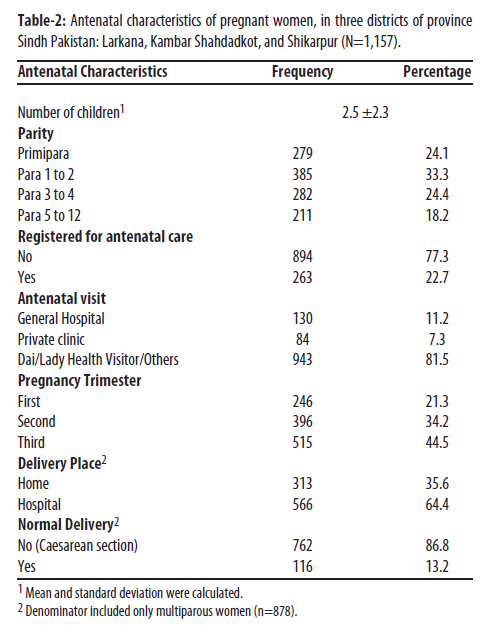 Four women (0.3%) were HIV positive - three in the district Larkana, one in Shikarpur, and none in Kambar Shahdadkot (Table-3). 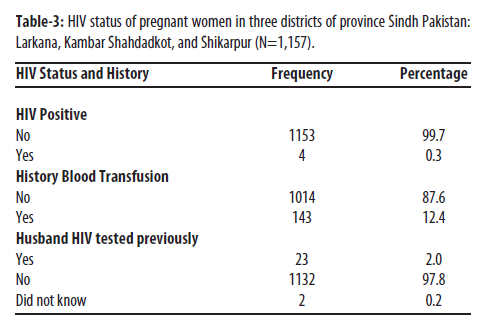 The HIV prevalence in Larkana was 0.3% (3/917) and in Shikarpur was 0.5% (1/199). The average age of HIV infected women was 27.3±2.2 years. No HIV positive woman was registered with a formal healthcare facility for antenatal care. All four women consulted CHWs and Dais or relatives for the deliveries. Three women who had tested positive for HIV had no education, and their husbands earned <10,000 PKR a month. One woman reported some education, and her husband earned >10,000 PKR per month. One woman reported a lifetime history of blood transfusion. The husbands of all four HIV-positive women were tested for an HIV infection. However, we do not know the test outcome.

The prevalence of HIV among pregnant women in Pakistan has remained low. Mahmud and Abbas in their 2009 study had screened 796 pregnant women in a tertiary care teaching hospital in northern Pakistan, and only two (0.2%) were confirmed positive.29 The first national antenatal HIV surveillance study was conducted in 2011 in 42 selected health facilities of nine districts. Out of 26,510 pregnant women tested, only 12 (0.04%) were confirmed HIV positive.30 In 2015, Pakistan Global AIDS Response Report was published in which data of UNICEF-supported Prevention of Mother to Child Transmission (PTCT) was reviewed. Throughout Pakistan, 4967 women of reproductive age group were screened, and 28 (0.5%) were confirmed HIV positive.8 The findings of our study are not much different from other studies conducted across the country. These HIV-positive women form a pool of risk factors and cannot be ignored.

The country must establish a comprehensive and an integrated routine HIV screening system for high-risk people and their spouses and children in hospitals, maternal care facilities, and blood donation and transfusion centres. The World Health Organization (WHO) recommends that pregnant women receive testing for HIV, syphilis, and hepatitis B surface antigen (HBsAg) at least once during pregnancy, preferably in the first trimester. Dual HIV/syphilis rapid diagnostic tests can be used as the first test for pregnant women as part of antenatal care. These simple tests can be used at the point-of-care and are cost-saving compared to standard testing in antenatal care. In addition, they enable more women to be diagnosed with HIV and syphilis and to access treatment and prevent transmission to their children.31

Our study has several limitations worth noting. First, our results warrant cautious generalisation because the study districts are some of the worse HIV-affected districts in Pakistan. Second, we do not know the test outcome of the participants' husbands who were tested for HIV. Thus, we could not assess the intra-spousal transmission.

HIV infection in Pakistan has started trickling down to low-risk communities. The HIV response requires an integrated approach to respond to the epidemic. Antenatal care services can be strengthened using the integrated approach.

Baseline assessment of therapeutic injection practices in Pakistan in 2020: A cross-sectional study

Regulation of quackery amid unprecedented HIV outbreak in Sindh, Pakistan