The small, rural town of Ratodero in Sindh province of Pakistan became the centre of media attention in April 2019 when a devastating human immunodeficiency virus (HIV) outbreak was confirmed primarily among children and some women, with most residing in Ratodero or adjoining villages and towns of the area. The outbreak was unprecedented for Pakistan, reminiscent of paediatric outbreaks from reuse of needles/syringes in Romania and elsewhere.1-3 Nearly all of the infected children had uninfected mothers indicating that perinatal infection was not implicated and that horizontal transmission was responsible. Given that no evidence of sexual abuse was noted, needle and syringe reuse were implicated. As the first cases were recognised, hundreds more were found with community-based screening and the outbreak rose to over 1000 persons infected with HIV.4-7

After receiving media attention, key authorities began working on a response in Ratodero. Partners included the Sindh government, Provincial and National Acquired Immunodeficiency Syndrome (AIDS) Control Programmes, the United Nation (UN) bodies, the Aga Khan University, and non-governmental organisations (NGOs). HIV testing was provided to 31,239 persons between April and July 2019, among which 930 (3.0%) were confirmed to be HIV-positive.4 Among the confirmed infected persons, 604 (out of 763 children aged up to 15 years; 79%) were <5 years old, 159 (17.1%) were ages 6-15 years, 148 (15.9%) were aged 16-49 years, and 19 (2.0%) were >50 years of age or of unknown age.4 By November 2020, the number of diagnosed HIV cases among children of Ratodero and nearby areas had increased to 1132.8 A WHO mission led by Federal Ministry of Health, UN partners and academia investigated the causes of the HIV outbreak and spent weeks investigating in the field and meeting community as well as local stakeholders.9 They concluded that transmission from mothers, from persons in high exposure risk groups, or from traditional community practices of tattooing did not explain the unusually high number of HIV infections. While paediatric infections may have occurred over several months, iatrogenic transmission via unsafe injection practices and poor infection prevention and control (IPC) were almost certainly the sources of the outbreak.10

Even two years after the outbreak, the affected community is still suffering severe consequences, including the burden of lifelong treatment of HIV-infected children, side-effects of antiretroviral therapy (ART), stigma and discrimination associated with HIV, co-morbidities, and death. The outbreak has pushed the affected families deeper into poverty due to out-of-pocket expenses that they have to bear to look after their sick children and loss of daily wages while visiting health facility for regular follow-up.  New HIV cases continue to be diagnosed; the HIV positivity rate at the HIV treatment centre in Ratodero was 6.6% (6 out of 91) for HIV tests conducted from 17th to 25th May 2021.

Considering the importance of this unprecedented outbreak to child health and poverty in these rural, impoverished communities, the overall impact on the epidemiology of HIV and AIDS in Pakistan, and the implications for potential future events in other parts of the nation and the world where safe injection practices are flouted, we present this special supplement of the Journal of Pakistan Medical Association (JPMA) with these objectives:

1. Address key questions that have emerged because of this outbreak, presenting evidence to be used as advocacy tool to sensitise the policy makers;

3. Address how to might mitigate clinical and community harms in future outbreaks.

We assembled a review panel of HIV experts and researchers to spearhead and solicit articles and commentaries in the special supplement to be peer reviewed by HIV experts. The process was initiated in December 2019 and the intention was to print the supplement by June 2020, a timetable delayed by the demands on the authors due to the COVID-19 pandemic. We are gratified that the process has been finally completed with hard work of the core team and support of JPMA.

One of the recommendations of the response plan was to initiate a community engagement project to be implemented by an NGO. To this end, Bridge Consultants Foundation was contracted by United Nations Children's Fund (UNICEF) to implement the project in Ratodero and its vicinity. The project utilised a multi-pronged approach and began by identifying influential persons of the area, getting their buy-in and permission to start working in the community, including engaging women to work as outreach workers (ORWs).

All research studies of this special supplement had received ethical clearance. All study participants had given informed consent to participate in the studies. In this editorial, we wish to introduce the published articles.

The community engagement project in Ratodero used the WHO recommended index testing approach to reach the contacts, especially siblings and parents of the recently diagnosed persons living with HIV (PLHIV) in the community. The description of this process is in the paper entitled, Index HIV testing among HIV-positive patients is feasible and successful in identifying additional HIV infections in Pakistan. From September 2019 to February 2020, a list of 706 families of PLHIV provided by the Provincial AIDS Control Programme yielded 1766 study participants with unknown HIV status. The first HIV test was performed by trained ORWs in the community; all persons testing positive on a Alere™ HIV Combo rapid diagnostic testing kit were transported to the testing centre for HIV test confirmation using SD Bioline HIV-1/2 3.0 and Uni-Gold™ HIV rapid diagnostic kits. The confirmed cases were enrolled into the HIV treatment programme. Among 1766 persons, 29 (1.6%) family contacts were HIV-infected, of whom seven were mothers (1.7% of the tested mothers) and 22 were siblings (2.0% of the tested siblings) of the PLHIV. None of the fathers were HIV-infected. All HIV-positive persons were linked to treatment and care programme. The study demonstrated that index testing is a feasible approach in Pakistan to increase the testing yield in the country especially among key populations, such as persons potentially exposed to unsafe blood or injection practices, and can be expanded through home visits.

A community engagement cross sectional survey-based paper titled Prevalence of HIV among pregnant women in three HIV-affected districts in Sindh, Pakistan interviewed 1,157 pregnant women in the last quarter of 2020 in Ratodero. The average age of the pregnant women was 28.7 ± 4.0 years and the gestational age was 7.6 ± 2.2 months. Most (92%) women had very limited formal education, 77% were not registered with a formal healthcare facility for antenatal care, and virtually all (99%) were homemakers and had never worked. Traditional birth attendant or dai provided care to 81.5% pregnant women in the study. Four (0.35%) women were confirmed to be HIV-infected. Considering that several HIV sub-epidemics have been reported in Larkana district in the past decade, the HIV infection among pregnant women of the area has remained low, suggesting, we believe, that non-sexual transmission of HIV in the district is extant.7,11-13

To assess the magnitude of the problem of injection safety in public and private health facilities, a baseline assessment in two districts, Larkana in Sindh and Gujarat in Punjab, was planned. This paper is titled Baseline assessment of therapeutic injection practices in Pakistan in 2020: a cross sectional study. The WHO injection safety tool C was used as key guidance to develop tools applicable to the local context.14 Study participants included injection prescribers, healthcare providers, managers of government health facilities, and patients visiting the health facilities. The tools included an observational checklist and structured and semi-structured interviews of healthcare providers. Reuse of injection equipment was not observed in any of the 60 health facilities. Results of interviews of 120 patients indicated that 22.5% had received an injection and 9.1% were prescribed an intravenous drip. The prescribers reported that 96.7% patients visiting public or private health facilities demanded an injection as part of their treatment. More injections were prescribed by private healthcare providers (25.0%) compared to those in the government health facilities (20.0%). Poor IPC was also observed. Of all the health facilities, only 16.7% had running water and soap available for hand washing. A small proportion of staff (range of 10-30%) at government facilities had received training on safe injection practices, rational drug prescription, hospital waste management, and IPC. The study noted that although needle/syringe/infusion equipment reuse was not found in the assessment, irrational prescription of injections and unsafe handling of sharps waste needed urgent attention.

The Sindh Healthcare Commission was asked by the Sindh government to conduct a study in the province to assess the role of unlicensed practitioners (often called quacks) or traditional healers and to take necessary regulatory steps as per the law. The study titled, Regulation of quackery amid unprecedented HIV outbreak in Sindh, Pakistan was conducted in 29 districts of Sindh province. A structured questionnaire assessed the certification of practitioners and an observational checklist was used to assess IPC practices and injection safety. The study inspected 4315 informal practitioners in all 29 districts. The highest proportion of unlicensed quacks was reported from Shaheed Benazirabad (previously Nawabshah) division. Poor IPC practices were observed among 89.4% (3861/4315) of the licensed practitioners. The problem of quackery is widespread in Sindh province and the Commission recommended shutting down all untrained providers and educating the community to avoid visiting untrained and unlicensed healthcare providers. Of course, in the absence of an affordable, legitimate healthcare workforce, this goal may be fanciful and IPC training may be an important stopgap measure for quacks, 'injectionists', and other traditional healers.

An opinion piece, community engagement following a human immunodeficiency virus outbreak in rural Pakistan: challenges and lessons learned, described the interventions and activities that were implemented in Ratodero and its vicinity as part of the community engagement project and shared challenges and lessons learned. The key activities that were part of the project included a pre-intervention survey, followed by the formation of 1358 support groups (685 for mothers and 673 for fathers) to help educate and alleviate misinformation about HIV in the community. These support groups reached 19,165 parents in multiple sessions. The project trained 100 religious leaders, 99 school teachers, 98 women leaders, 57 media persons, and 30 union council councillors about HIV transmission and prevention, disease and treatment, social mobilisation, and the importance of HIV testing in the community. The community engagement project identified 1205 affected families and 1298 PLHIV in the area. All HIV positive persons (adult and children) were linked to HIV treatment and care if they did not already have such links. The project worked as a bridge between the PLHIV and the treatment centres to establish connections and improve adherence to ART. By engaging local branch of Pakistan Medical Association (PMA) and with assistance from UNICEF and the Sindh AIDS Control Programme, 94 general practitioners in the area were trained in HIV/AIDS and IPC. Key challenges included dearth of a trained health workforce, notably infectious diseases specialists, pathologists, pharmacists, and support staff, to complement the outcome of community engagement at the HIV treatment centres. Drug shortages and lack of paediatric formulations were also a problem, as has been also described in Africa.15 One of the biggest hurdles faced by the ORWs in maintaining good relations and contacts with the community was lack of necessary tests for the PLHIV. When referred to private laboratories, patients vented their frustrations to ORWs, often blaming the project team for a lack of problem resolution. The following were deemed essential for successful initiation of HIV treatment, adherence to treatment, and minimising loss-to-follow-up: i) effective engagement of the community; ii) building trust and confidence of the community; iii) involvement of community leaders crucial to establish and sustain linkages; and iv) continuous contact with the affected families and addressing their concerns.

Based on the experience of implementing the community engagement project, the following recommendations should be considered by HIV programme implementers and policymakers in Pakistan and elsewhere:

We hope this issue of JPMA will prove helpful to disseminate lessons learned from the preventable Ratodero outbreak tragedy. 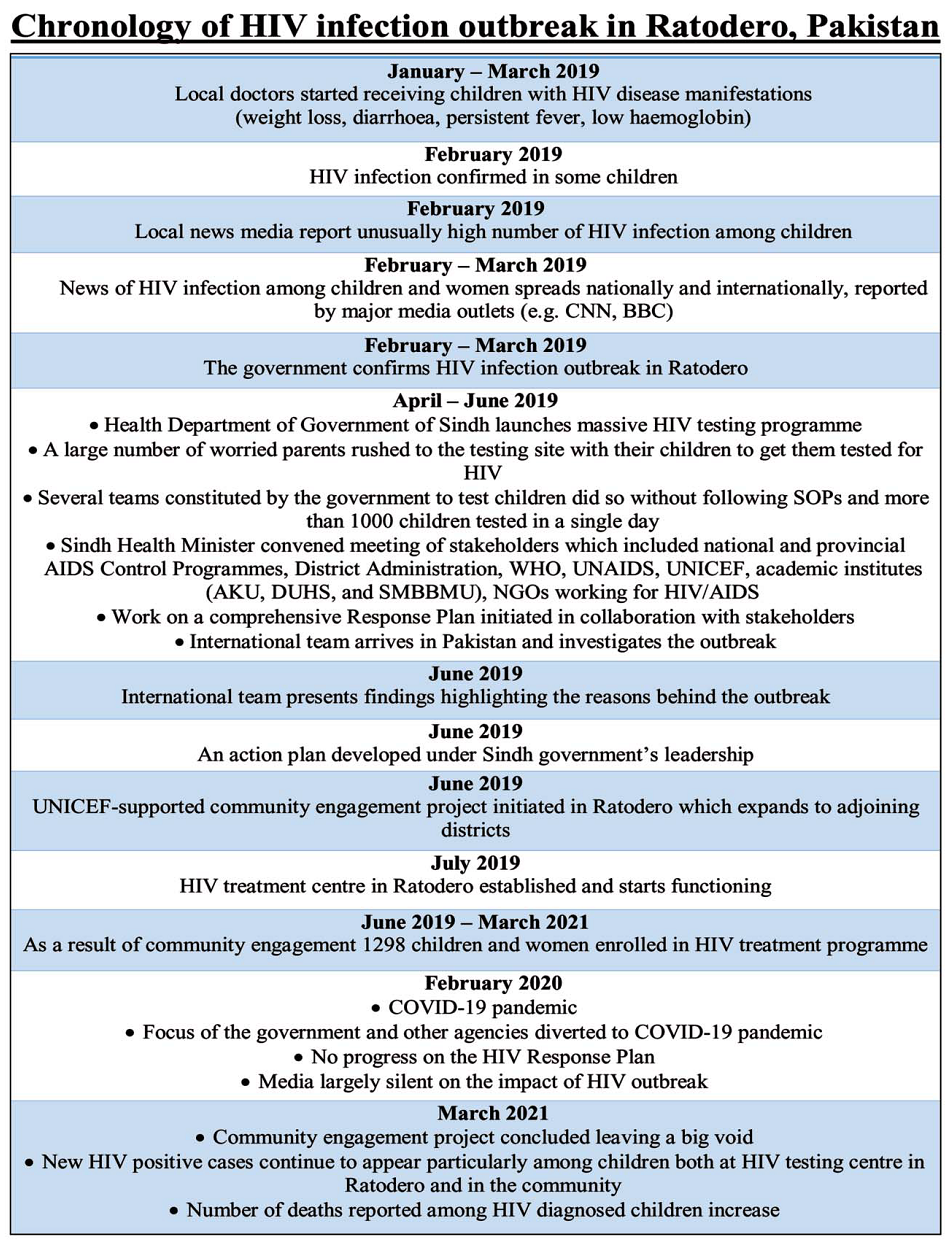