Gastroesophageal adenocarcinomas have a high risk of brain metastases. Patients with oesophageal cancer often present with symptoms of gastrointestinal (GI) obstruction and bleeding. On the other hand, high-dose steroids are used to supress brain oedema in cases of brain tumour, resulting in a drastic rise in appetite. Parenteral nutrition appears to reduce the appetite of humans, so it can be used in palliative patients who receive hypocaloric food to combat hunger. A man, 53 years old with intracranial metastasis space-occupying lesions (SOL) from oesophageal adenocarcinoma and cachexia, received 3x10 mg dexamethasone followed by tapering. Acute upper GI bleeding occurred during hospitalisation; thus, enteral feeding was delayed, and intravenous feeding was otherwise given. After two weeks of hospitalisation, we found that there was a decrease in hunger, change in clinical condition, tolerance to food, and functional ability.

Oesophageal cancer is the eighth most prevalent cancer of the sixth most common cause of death in the world.1 Central nervous system (CNS) metastases of gastrointestinal malignancy are uncommon as demonstrated by just 2% of brain metastasis in patients with oesophageal carcinoma.2

Patients often experience tumour-associated gastrointestinal obstruction and bleeding, resulting in decreased food intake and immediate need for temporary fasting. Steroid therapy, on the other hand, stimulates expression of neuropeptide Y. It prevents proopiomelanocortin synthesis leading to increased appetite, and hunger.6 Parenteral nutrition can potentially reduce the patients' appetite,7 so that palliative patients who obtain hypocaloric nutrition to resolve hunger and enhance the quality of life of patients.

A 53 years old male, weighing 55 kg, Basal Metabolic Index 18 kg/m2, was diagnosed with an intracranial space-occupying lesion (SOL) suspected of oesophageal cancer metastases. The patient presented with the main complaint of diminished consciousness that had developed since one day before admission. The patient has been known to have a history of intermittent melena since two years. It was noticed that the patient had a normal appetite, but once he overate, he complained of feeling full and painful around his chest. Over the last four days, the patient had diminished consciousness followed by right-sided limb weakness. Brain Computer tomography (CT) with contrasts revealed the presence of multiple intraaxial solid lesions with malignant characteristics surrounded by perifocal oedema, causing constriction of third and lateral ventricles together with 1.2 cm subfalcine herniation to the right, both of which indicate metastases.

The patient had a history of oesophageal achalasia surgery nearly 23 years ago. He used salted fish and canned food every day because of their practicality; he seldom had fruits and vegetables and took black coffee regularly. He had a history of smoking one pack a day from a younger age. There has also been evidence of an unexplained weight loss of 5 kg (9%) over the last two years. Physical examination showed signs of muscle wasting and right-side hemiparesis. The laboratory tests in this patient revealed anaemia (haemoglobin 9 mg/dL) with reduced MCV, MCH, and MCHC; leucocytosis (12,180/mL); hypoalbuminaemia (2,6 g/dL); with normal electrolyte serum levels, liver and renal function.

This patient received palliative care focusing on enhancing his nutritional status as well as preconditioning for whole-brain radiation and chemotherapy. After an endoscopy-guided NGT insertion, the patient reported being nauseated after a meal, but there was no vomiting, normal appetite, and regular hunger; nevertheless, there was still evidence of melena. During hospitalisation, the patient received 3x10 mg dexamethasone titrated to a dosage of 2x5 mg on day 14. He demonstrated improved consciousness and was eventually prepared for radiation, followed by chemotherapy.

During his hospital stay, the patient was given 3x10 mg dexamethasone and was tapered off to a dose of 2x5 mg. Steroid stimulates neuropeptide Y (NPY) expression, an orexigenic hormone, and inhibits (proopiomelanocortin) POMC synthesis, an anorexigenic hormone, all of which act on hypothalamus for appetite regulation.6 The anti-anorexic effect of steroid only lasts for the first 2-4 weeks, and thus can only be used for this purpose for two weeks. The prescription of 3-8 mg dexamethasone daily for consecutive four days indicated an increased in the appetite of the patient.11 After day 4 of the hospitalization, the patient began to complain of hunger. He received a liquid diet following NGT placement. The patient became nauseated after NGT insertion, presumable due to a sudden loss of obstructed oesophagus so that the food could reach the stomach directly. This problem was handled by small daily feeding with high-nutrient-density foods. In addition, nausea can also be caused by active gastrointestinal bleeding following steroid therapy.

Energy consumption decreased in this case due to the preparation of the bronchoscopy and also because the patient had gastrointestinal bleeding. Nutrition was administrated by increasing gradually the patient's tolerance to the target dietary therapy with target protein intake of 1.2g/kgBB/day as shown in Figure-1. 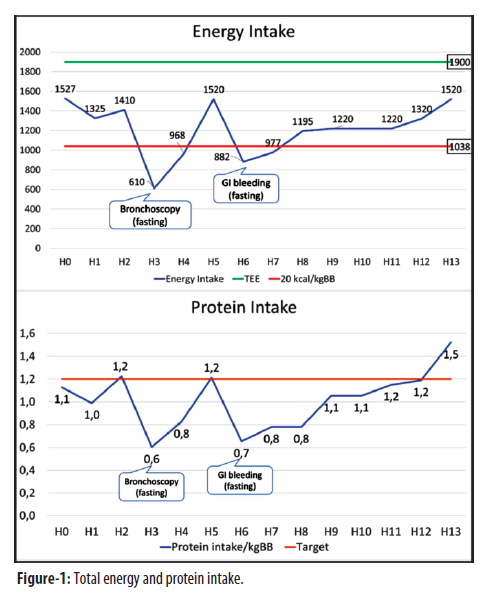 Supplementary parenteral nutrition has been given to the patient to meet his nutritional needs as shown in Figure-2. 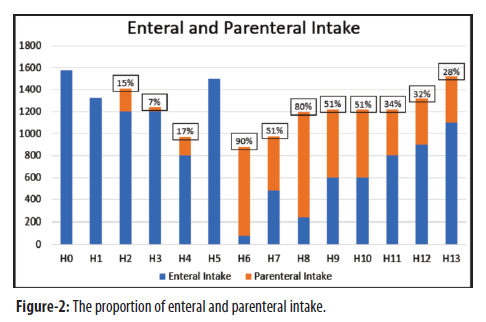 Based on the guidelines of the European Society for Clinical Nutrition and Metabolism (ESPEN),14 parenteral nutrition is recommended when enteral nutrition is not feasible. However, the provision of dietary, medicinal therapy to these patients did not sustain or raise the levels of haemoglobin and albumin.

In palliative patients, a dietary plan may contribute to a lower quality of life, and the presence of ketone in malnutrition can result in euphoric mood and decreased hunger, and pain.15 Two weeks after the treatment, the patient showed changes in clinical parameters, tolerance to enteral nutrition, and functional capacity to become a non-ambulatory patient.

Palliative care is the treatment of choice for patients with oesophageal cancer inoperable brain metastases. The patients' convenience is the main concern in palliative care. Feeding is given progressively, according to their tolerance, in order to preserve their nutritional status and functional capacity; however, micronutrient fulfilment must be sought. Small frequent feeding, as well as parenteral nutrition, is recommended to reduce hunger in those receiving corticosteroid therapy.