Protein intake and number of children associated with nutritional status

Objective: This study aimed to evaluate the association between protein intake and number of children in a family, based on nutritional status of children aged 2 to 12 years of age.

Methods: This was a cross-sectional study with consecutive sampling. Weight and height were measured, and the 24-hour food recall was gathered with a questionnaire. Nutritional status was assessed using weight-for-age curve of Centers for Disease Control and Prevention (CDC) growth chart. Protein intake was assessed using NutriSurvey. Data were analysed with chi-square test.

Children are a valuable asset for a nation because they will be its next generation. Therefore, they need to be prepared early in order to ensure the quality of citizens for the next generation. The quality of citizens is defined from morals, religion, education and health. In terms of health, children's nutrition is very important because it affects child's performance and quality in the future. The nutritional status of children could be evaluated through their dietary intake. Nutritional status is the status of basic food content needed for one's health and physical strength.1 Nutritional status categories include good nutrition and malnutrition. The nutritional status of children could be calculated by identifying their anthropometric status through measurements of body weight, height, length and head circumference, according to their age group.

The nutritional status of children in Indonesia is very concerning. As reported in national print media, UNICEF expects that there will be about 23 million malnourished toddlers in Indonesia by 2020.2 Malnutrition in children make them susceptible to diseases, increase their mortality rate and leads to poor posture in adulthood. The cognitive abilities of children suffering from malnutrition are also reduced. The problem of malnutrition in Indonesia is spread throughout several regions, with most cases occurring in areas that are poor, remote and disadvantaged.2 According to 2018 Riset Kesehatan Dasar (Baseline Health Research) data from Indonesia Ministry of Health, there were 17 provinces with an elevated level of malnourishment, defined as greater than 17.7% of children, with the highest proportion in East Nusa Tenggara.3 This level of malnutrition was found in almost all districts in East Nusa Tenggara, with most cases in Southwest Sumba, Kupang, South Mideast and North Mideast.4 As several studies stated that protein intake is positively related to nutritional status and BMI (body mass index), malnutrition that is observed in East Nusa Tenggara is unexpected. Because East Nusa Tenggara is an island with ready access to fishing and a lot of seafood is available as a protein source, the condition of malnutrition at East Nusa Tenggara contradicts their ease of access towards seafood.5

According to East Nusa Tenggara Central Bureau of Statistics, the average family had 4.62 members. It could be assumed this included two parents and three children. This means the national programme for population control is not working as it should be only two children per family. Keluarga Berencana (KB) is the national population control programme that aims not only to prevent overpopulation but also to raise the quality of life of all Indonesian families. Until now, there was no research in Indonesia comparing the number of children in a family and their nutritional status.6,7

The cross-sectional study was conducted for seven days in Pero Konda Village, Southwest Sumba, East Nusa Tenggara. The sample was children aged 2 to 12 years from hamlet 1 in the Pero Konda Village. It was approved by the ethical committee of Faculty of Medicine, Universitas Indonesia. The subjects were obtained using consecutive sampling method. The data used were primary data obtained from the results of assessments of weight and height, as well as, food intake questionnaire instruments. Nutritional status was assessed by using a weight-for-age curve from CDC growth chart, and protein intake was analysed using NutriSurvey program (EBISpro). Nutritional status was categorised into malnutrition at point less than 70% to 90% in CDC growth chart. Protein intake was calculated based on the subject's food consumption from the results of a 24-hour food recall questionnaire interview. Food consumption that was still in household size units was converted to grams. Protein intake was then calculated based on the types of food using NutriSurvey program (EBISpro). The results of protein intake of each subject were compared with daily needs and categorised as sufficient if 80% or greater or insufficient if less than 80%. The data were collected manually and then edited, coded, cleaned, and analysed using Statistical Package for Social Science (SPSS) version 20 for Windows software. The relationship between protein and nutritional status was analysed using chi-square test with p < 0.05 being significant.

The subjects came from 54 families, with number of children ranging from one to 11 children per family. Thirteen families had three or four children as presented in Figure-1. 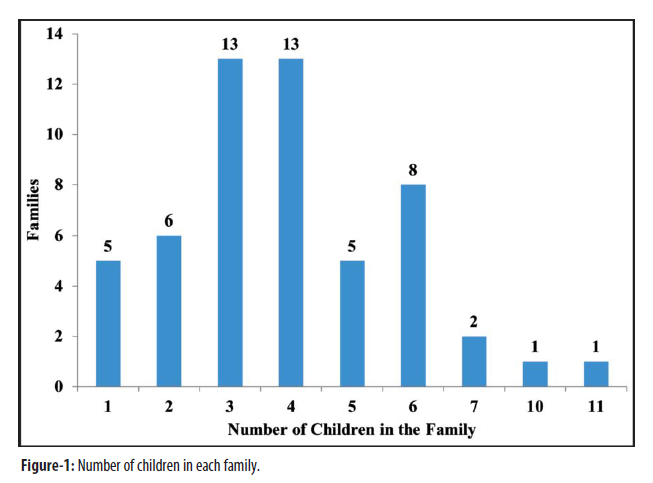 Based on the 24-hour food recall questionnaire, a description of the subject's protein intake sources is presented in Table-2. 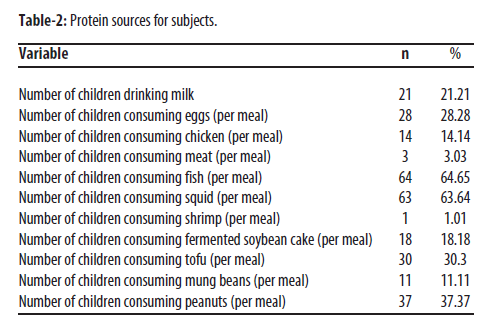 As could be seen in Table-2, most children in Pero Konda Village rarely drank milk. Most subjects were given sweet tea besides milk. In daily food consumption, not all subjects consumed eggs, chicken, and meat. Some subjects consumed fish and squid at every meal because their parents' livelihood were fishing.

There were 52 females and 47 males in this study. The average weight of the girls was 19.96 kg, which was greater than the average weight of boys, which was 17.10 kg. Similarly, the average height of girls was 114.96 cm, which was higher than the average height of boys, which was 109.75 cm. This phenomenon may be explained by the fact that puberty occurs earlier in girls than in boys. In this study, when girls and boys with similar ages were compared, girls were likely to be heavier and taller. On average, boys start puberty at the age of 13, while girls begin puberty at the age of 10. Girls experience rapid growth before and during puberty. The increase of height could reach 4 to 6 cm per year and the weight increase could be up to 2 kg per year. In addition, in this study, number of female subjects was greater than the number of male subjects.

Most of the families had more than two children. There were thirteen families with three or four children each. With more children, there was a greater burden on the family because each child received less attention from the mother and food had to be divided amongst more family members. The villagers had many children because population control programme from the government had just recently been implemented and many families still did not understand the programme.

Based on the results of protein intake questionnaire interview, it was found that children in Pero Konda village rarely consumed milk. This is very disappointing because a study had shown that there was an association between milk consumption and the increase of weight-for-age and height-for-age z scores. Furthermore, consumption of milk can reduce the risk of being moderately or severely underweight or stunted.8 Milk is needed by the body because it is a high source of protein and is important for growth. Other research also showed that milk played a significant role in improving the quality of daily food intake, especially for 2-year-old children.9

In terms of daily food intake, not all subjects consumed eggs, chicken and meat. They rarely consumed eggs and chicken because they had to be purchased at the market. Meat was also rarely consumed because it was expensive. Therefore, intake of animal protein was mostly from the sea, including fish and squid, but not shrimp, because fishermen in Pero Konda Village do not catch shrimp. Unfortunately, inadequate fish and squid were consumed by children in this study because fish and squid are preferably sold for income.

Chi-square analysis revealed no association between protein intake and nutritional status. This is because protein is not the only macronutrient that contributes to nutritional status. The other macronutrients that are needed include carbohydrates and fats. Micronutrients such as vitamins and minerals are also an important part of a complete healthy diet.10 Another finding of this study was that children with poor protein intake still had good weight. The reason being enough or even excess carbohydrate consumption being a compensatory mechanism. This lead to excess storage of carbohydrates as glycogen in the liver and muscles. They could also be used as ingredients for synthesis of fatty acids, which are stored in adipose tissue. Therefore, nutritional status measured according to weight-for-age curve could still be good in children with poor protein intake.

There are still some limitations to this study. There are other variables that influence the determination of nutritional status not examined in this study, such as intake of other macronutrients and micronutrients, level of income, level of maternal knowledge and infectious diseases. The analysis used in this study was only univariate. Bivariate analysis, which does not control other confounding factors was not implemented.

The children in Pero Konda Village were undernourished. There was no association between protein intake and weight. In addition, the dietary habits of villagers were poor. Therefore, promotion of good dietary habits is needed.

Acknowledgement: The authors would like to thank all of the participants in this study.