The diaphragm is considered the main muscle of respiration. The function of diaphragm is one of the critical determinants of ability of the patient to be weaned off and disconnected from mechanical ventilation. At some point during their ICU care, up to 80% of patients had some respiratory muscle weakness with different severity and duration.2 Therefore, the ability to assess diaphragm muscle thickness and function on a regular basis is important in daily intensive care practice. Early detection of diaphragm dysfunction and early intervention could reduce the duration of mechanical ventilation and prevent adverse effects.

Various modalities have been used to evaluate diaphragm function, including computed tomography scanning, magnetic resonance imaging, trans-diaphragmatic pressure monitoring and, more recently, ultrasound. Compared to other modalities, ultrasound has several advantages. It is readily used at the bedside, non-invasive, free of radiation exposure and relatively easy to learn.

This prospective observational study was designed to understand the course of diaphragm muscle thinning in mechanically ventilated critically ill patients at Cipto Mangunkusumo National Hospital. Approval was obtained from Ethics Committee of Universitas Indonesia (1020/UN2.F1/ETIK/2018), and the study was recorded in ClinicalTrials.gov (NCT03933332).

Between December 2018 and February 2019, all newly admitted patients to ICU were evaluated for potential recruitment for the study. After obtaining informed consent from patients or their legal guardians, adult patients who had been newly started on mechanical ventilation with a modified Rankin Score at least below 4 within one month before admission to ICU were included. The exclusion criteria were: 1. pregnant women; 2. intubation for more than 24 hours before ICU admission; 3. cardiac or chest surgery patients; and 4. patients with peripheral musculoskeletal diseases. It was estimated from previous research that 27 subjects were needed for this study; therefore, assuming a 10% dropout rate, the total number of subjects needed was 30.

To minimize measurement bias, all measurements were conducted by one certified radiologist using a Samsung SonoAce R3 (Korea) ultrasound machine with a 10-15 MHz high frequency linear transducer. All diaphragm ultrasound images were then stored in a Picture Archiving and Communication System for further evaluation. All subjects were followed up until discontinuation of mechanical ventilation and discharge from the ICU. The duration of mechanical ventilation, length of ICU stay and mortality were reported as outcome measurements.

This is the first ultrasound study of diaphragm muscle thickness in the zone of apposition conducted in critically ill patients in Indonesia. The plan was to enroll 52 patients for the study; seven patients were excluded because they did not give consent to be included, and fifteen patients did not complete follow-up measurements due to deteriorating conditions or death. Ultimately, there were only thirty patients who had five measurements of diaphragm muscle thickness. Twelve patients were on mechanical ventilation for less than seven days, while duration of mechanical ventilation was seven days or longer for remaining eighteen patients. 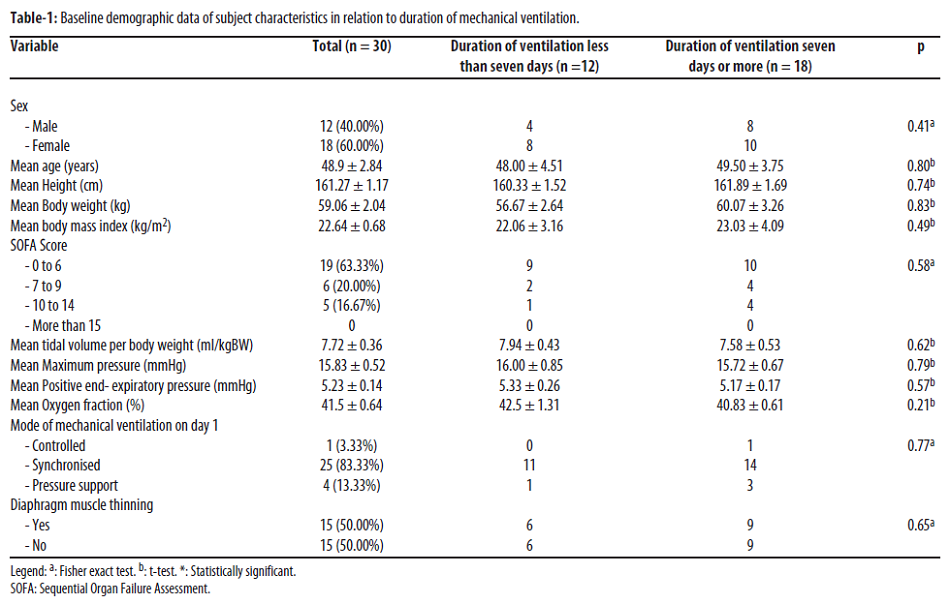 The subgroup analysis focused on patients who had diaphragm muscle thinning on final measurement.

Acknowledgement: We thank Cipto Mangunkusumo National Hospital, Jakarta, Indonesia for allowing us to conduct this research. This work was also supported by the Department of Radiology, Faculty of Medicine, University of Indonesia.