Objective: This study aimed to analyse the effect of a supplementary treatment with natural antioxidants after exercise on the MDA levels in women during the third trimester of pregnancy.

Methods: This experimental study from August to October 2016 at several midwife practices and community health centres (puskesmas) in Palembang, Indonesia included 24 prenatal pregnant women separated to 3 groups (n = 8); a control group, a positive control group that undertook an exercise programme, and a treatment group that underwent exercise programme and took natural antioxidants after the exercise. Guava juice containing vitamin C was used as antioxidant treatment. The MDA levels were analysed by spectrophotometry.

Conclusion: The MDA levels were significantly decreased after combined treatment with natural antioxidants and exercise in the third trimester of pregnancy.

Pregnancy is a condition that is vulnerable to many types of stress that can affect physiology and metabolic function. Pregnancy is also associated with an increase in the energy and oxygen needs of the mother.1,2 Metabolic processes that increase the use of oxygen; furthermore, if the available oxygen is not used at most, this may cause oxidative stress and contribute to an excessive production of free radicals, with negative consequences for the continuation of the pregnancy process.3 An imbalance between antioxidants and free radicals in pregnancy can cause pathological changes that can lead to pregnancy complications. For this reason, the availability of a biochemical marker of antioxidant and oxidant status is beneficial for indentification of complications that may occur during pregnancy.4

Exercise is one therapy that is intended to alleviate problems that occur during pregnancy due to the formation of free radicals, but exercise programmes must be adapted to meet the abilities of pregnant women.5,6 Physical exercise during pregnancy can control weight gain, prevent diabetes and hypertension and minimise work time.7 Exercising by engaging in sports activities is one way to neutralise the formation of free radicals because excess oxygen can be consumed to produce the energy required for sports physical activities.8

Exercise may also reduce the level of malondialdehyde (MDA), a biochemical marker associated with free radical stress. Malondialdehyde (MDA) is formed as a result of lipid peroxidation due to free radicals, and its presence can, therefore, be used as an oxidative stress indicator.1 Previous research has reported higher MDA levels in pregnant than in non-pregnant women, and rises in MDA levels correspond to increases in gestational age during the first, second, and third trimesters.9,10 Other researchers have also found significant increases in MDA levels in pregnant women with hypertension, as well as an accompanying decrease in non-enzyme antioxidants, such as vitamins E, C and A.11-14

This experimental study with a post-test-only control group was carried out from August to October 2016 at several midwife practices and community health centres (puskesmas) in Palembang and at the Bio Sains Riset Laboratory, Palembang.

The samples were prepared before they were sent to the laboratory to determine the MDA level. Each blood samples (4 cc) were taken from the median cubital vein using a 5 cc syringe and immediately transferred to a micro centrifuge tube containing anticoagulants. The whole blood was centrifuged at 3500 rpm for 5 minutes to separate the plasma serum. The plasma was transferred to a new micro centrifuge and stored at -70°C before being sent to the laboratory.

Antioxidant compounds have been administered in the form of guava juice. The subject as treatment group consumed 250 ml guava juice without additional sugar.

The MDA levels were determined by a spectrophotometric assay at the Bio Sains Riset Laboratory in Palembang. Preparation of the reagents began by dissolving 0.67 g of 2-thiobarbiturate acid in 100 ml distilled water, then by adding 0.5 g of sodium hydroxide and 100 ml glacial acetic acid, and by adding 125 ul of stock solution dissolved in aquabidest.

For MDA analysis, 100 UL samples (blood plasma) or standards were inserted into the labelled tubes and 0, 9ml distilled water was added om each of the tubes. On the next sample TBA reagent 0.5ml was added. The tube contains a solution then heated in a water bath at a temperature of 95oC for 1 hour and further centrifuged at 7000 rpm for 10 minutes. The absorbance was read at 550 nm with a spectrophotometer.

Table-1 shows the Shapiro-Wilk test results for the MDA levels for each group. The p-value values were all greater than the significance level a = 0.05, so that all data met the parametric prerequisite test for normal distribution and could be further evaluated by parametric statistical tests to prove the research hypothesis.

Table-2 confirms that the third trimester MDA levels were lower in pregnant women who were engaged in pregnancy exercises and that there were further significant reductions in MDA levels when exercise was combined with an antioxidant treatment. These data are shown in Figure-1. 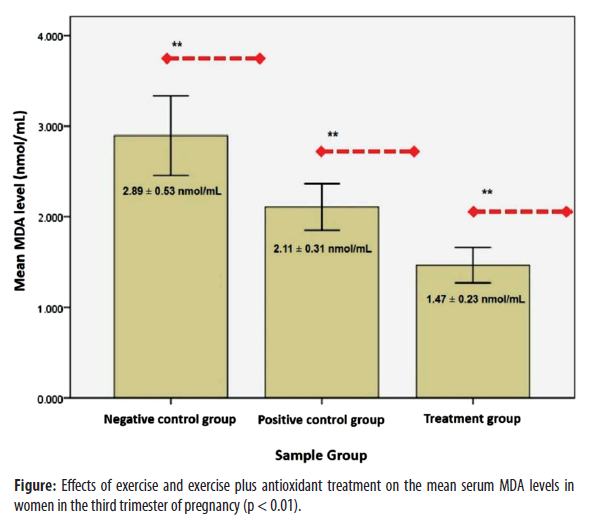 The lowest mean MDA level (1.47 ± 0.23 nmol/mL) was observed in the treatment group which combined both exercise and antioxidant intake.

In this study, the effect of treatment with natural antioxidants on serum MDA levels in women in the third trimester of pregnancy was analysed. The working hypothesis was that oxidative stress arises when an imbalance exists between the production of oxidants and antioxidants in the body and that MDA, which is an end product of stress-related lipid peroxidation,15 would be a useful biological marker for oxidative stress in pregnant women.

Free radicals are more harmful to cells than other non-free radical oxidants since free radicals have a highly reactive nature and appear to undergo chain reactions that promote the formation of additional new radicals. Antioxidants can prevent damage from free radicals by squeezing this reactivity and supplying electrons to reduce the adverse effects of free radicals such as superoxide radical (SOR).16 In the previous study, pregnant women who received high oxygen levels (60%) during Caesarean section with regional anaesthesia (subarachnoid block) were found to have high levels of free radicals in both maternal blood and the blood of the newborn when compared with mothers given normal levels (21%) of oxygen.17 Blood gas and MDA levels were reviewed every 10 minutes, and a significant increase in MDA levels was observed in the 20th minute.

In the present study, the MDA level was decreased in the third trimester of pregnancy which was consumed natural antioxidant as well as exercise. The antioxidant compounds used in this study were natural ingredients found in guava fruit juice, containing substantial amounts of vitamin C (ascorbic acid). Natural antioxidant compounds are electron-donating compounds and may include enzymes and protein-binding metals.18 Antioxidants function in a 2-stage strategy: they prevent the accumulation of oxidant compounds in excess, and they disrupt the occurrence of chain reactions that produce free radicals. Oxidative stress occurs when the resulting SOR level is higher than the level that can be suppressed by cell defence mechanisms. If free radical compounds are not extinguished, oxygen will a poison in the body. Antioxidants donate electrons to reduce the negative impacts of SOR.19

Vitamin C is an essential micronutrient that is needed for normal metabolic reactions in the body. Vitamin C must be obtained from the diet in humans, with the primary source being fresh fruit, particularly citrus fruits and vegetables. Some studies have reported lower levels of non-enzyme antioxidants, namely vitamins C and E, in amniotic fluid, foetal cord blood and maternal blood in long-term labour that ended with Caesarean section than in normal labour.20-22

The study also reported that the growing increase in MDA levels is accompanied by a decrease in non-enzyme antioxidants, such as vitamins E, C and A, in pregnant women with hypertension.11-13 Pregnancy complications in the first, second and third trimesters can arise due to the formation of reactive oxygen species and the psychological burden of pregnancy. Nevertheless, regardless of their cause, these risks can be reduced or eliminated by offering care and sporting activities during pregnancy. The treatments are expected to eliminate physical complaints, while exercise during pregnancy may prevent the formation of free radicals. However, exercise programmes must always take into account the skill of pregnant women.5,6

A combination of exercise and intake of natural antioxidants significantly reduced MDA levels in women during the third trimester of pregnancy.

Acknowledgement: The authors thank to Department of Midwifery, Politeknik Kesehatan Palembang, Ministry of Health, Indonesia for the award of a Beginner Lecturer Research Grant in 2016.