Methods: This was a prospective cohort study of all patients about to undergo Open-heart surgery at Cipto Mangunkusumo National Referral Hospital, Jakarta. Subjects who fulfilled the selection criteria underwent cognitive assessment one day before the surgery. Basal rSO2 was registered prior to anaesthetic induction, and this value was reported every 10 minutes throughout the procedure as the lowest rSO2 and total desaturation (drop >20%) duration. On postoperative day 5, cognitive function was reassessed. We declared a drop in the cognitive function if the score dropped to >20% from the baseline in at least two cognitive tests.

Results: The incidence of POCD was 51.7%. Basal rSO2 values between POCD and non-POCD subjects were relatively similar. A significant difference was noted in the duration of total rSO2 desaturation between the two groups. Total rSO2 desaturation was longer in subjects with than without POCD. The ROC (receiver operating characteristic) curve showed a cut-off point of 20.5 minutes, with an AUC (area under curve) size of 126.5 minutes %.

Post-operative Cognitive Dysfunction (POCD) is defined as a decrease in cognitive dysfunction immediately following surgery.1,2 Attention to this dysfunction is intensifying because POCD increases patients' dependency, morbidity and mortality. The prevalence of POCD is highest after Open-heart surgery than after any other types of surgery. A previous study in our hospital reported a POCD incidence of 40.7% after Open-heart surgery.3

The pathophysiology of POCD that arises after Open-heart surgery is not well understood. However, insufficient perfusion, asystemic inflammatory response, or microemboli from cardiopulmonary bypass are thought to have a role. Sufficiency of brain oxygenation is therefore viewed as necessary, and this can be evaluated by measuring regional oxygen saturation (rSO2).3-5 Monitoring of rSO2 is, therefore, becoming more popular, with varying results.

One method for detecting brain oxygenation is Near-infrared Spectroscopy (NIRS), a technique that utilizes infrared wavelengths between 750 and 950 nm.6,7 Detection of brain oxygenation requires the acquisition of both absolute and baseline values. In the present study, we tested the hypothesis that POCD after Open-heart surgery is related to the NIRS value.

Subjects' recruitment was done by non-probability sampling method. The sample size was calculated based on the following formula, n = F (a,b,I,R2), because this study performed a regression analysis. Alpha was stated as type 1 error (0.05), Beta was stated as type II error (0.2), I was stated as independent variables and determined by the researcher (5), while R2 was stated as a minimum determinant coefficient (0.2). From the calculation, it was found that there should be about 55 subjects with 10% probability of drop out cases. Thus, 60 was the minimum subjects needed for the study.

Subjects aged at least 18 years old who underwent Open-heart surgery using a CPB machine with a healthy mental condition and willing to participate in the study by signing informed consent forms were included. Those subjects were included who were able to read, write, and speak in Bahasa Indonesia for ease in subsequent examinations. Subjects with cognitive impairment, psychiatric disorder, consuming psychotropic medication or narcotics, having undergone urgent procedures, and intubated before procedures were excluded. Subjects who were on CPB, not in line with the therapeutic protocol, and died postoperatively within five days, were also not included.

All subjects underwent the following validated cognitive function tests the day before surgery: Rey Auditory Verbal Learning Test (immediate and delayed), Trail Making Test (A and B) and Digit Span (forwards and backwards). Before the anaesthetic induction, a NIRS probe (INVOS™) was attached to the subject's forehead. In all subjects, balanced anaesthesia was attained using Sufentanil, Midazolam, Sevoflurane with an appropriate non-depolarizing muscle relaxant.  The NIRS reading was recorded every 15 minutes throughout the surgery. Desaturation of rSO2 was described as a decrease of 20% or more of the NIRS value over baseline.8-11 Arterial blood samples were withdrawn regularly for blood gas analysis. On the fifth postoperative day, the subjects were retested for cognitive function. A drop in cognitive function was declared when a decrease of 20% or more was determined on at least two of the cognitive tests.12-14

Collected data were measured and analysed by the Statistical Programme for Social Sciences Version 20. (The International Business Machine Corp., Armonk, New York, USA). Bivariate analysis was conducted to assess the relationship between several factors. Independent T-test was used to measure numeric data with normal distribution while Mann-Whitney test was used to measure numeric data with non- normal distribution. Chi-square test and/or alternative Fischer's Exact test was performed for categorical data. Regression analysis, as part of the multivariate analysis, was also performed to measure the contributing factors related to POCD. Significant results in the study were stated with p-value less than 0.05.

About 75 patients were recruited at the beginning of the study. Five patients were excluded for pre-operative psychiatric or cognitive problems determined by the MINI mental scale survey tool or because of psychotropic drug use. Of the 70 remaining subjects, 10 either expired or had prolonged ICU stays. No differences were observed in the baseline characteristics of subjects with and without cognitive dysfunction (Table-1). 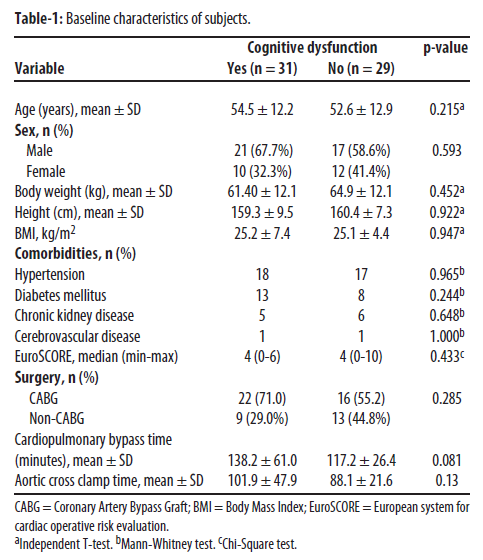 The baseline rSO2 value was variable among the subjects. Eleven subjects had very low basal rSO2 (<50%) values, but only 5 of those 11 subjects experienced POCD.

No differences were detected in the basal rSO2 value between the subjects with and without POCD (Table-2).

Several subjects had extremely low basal values but were fully conscious. POCD was evident in 31 (51.7%) subjects. We further analysed the duration of the rSO2 decrease in subjects with rSO2 decreases of 20% or more.

A statistically significant increase was evident for the desaturation duration of the subjects with versus without POCD. This difference was evident during the intraoperative period, during CPB use and even after CPB was stopped. The total desaturation duration also was significantly longer in the subjects with than without POCD.

The INVOS™ machine was able to display the duration of desaturation in two scales, minute and min% (an integral function derived from the duration and depth of the desaturation curve). Analysis of the Receiver Operating Characteristic (ROC) curve for the duration of the total desaturation time in minutes identified a cut-off point of 20.5 minutes where the sensitivity and specificity were highest.

The ROC curve provided an Area Under Curve (AUC) for subjects with more than 20% desaturation from baseline. The AUC for rSO2 desaturation was larger in the POCD group than in the non-POCD group, at 412 [0-4875] min% versus 0 [0-472] min%, respectively (p = 0.003). The ROC curve for min% scale revealed a cut-off for the worst rSO2 desaturation at 126.5 min% with a sensitivity of 80.6% and a specificity of 82.8%. Use of a regression model generated the probability of a subject having POCD (Figure). 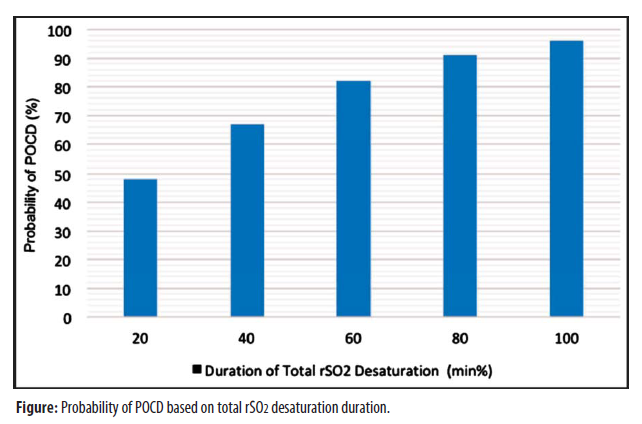 The results obtained in this study on the relationship between NIRS baseline value and POCD differed from our initial expectations. The absolute basal value of rSO2 was relatively widespread for all subjects. The normal rSO2 range was 55-80%, and yet several subjects had even lower baseline rSO2 scores, and these low baseline readings were evident even in fully conscious subjects.8,9

This phenomenon is not easy to explain. We cannot conclude that NIRS measurements are not indicative of brain perfusion since the global oxygenation of subjects can be presumed to be adequate on the basis on SpO2 and blood gas analysis. Therefore, we are more inclined to consider those technical problems that may have arisen with the NIRS sensor attachment. Even though all subjects were wiped with alcohol before sensor attachment, we could not guarantee that the skin attachment area was entirely free of sweat and oil, which could have interfered with the probe signal. The temperature of the frontal skin may also play a role, as it decreases the capillary calibre in the frontal skin to give the impression of low rSO2.

Several subjects with POCD had excellent rSO2 baseline values but displayed a drop in rSO2 during CPB use. The rSO2 desaturation was not prolonged and tended to recover after cessation of the CPB; however, the duration of total desaturation affected the incidence of POCD. The complete desaturation was considered to represent the summation of all durations of desaturation episodes.

During surgery, rSO2 desaturation of varying durations can occur repeatedly. The ROC curve revealed that the worst reliable AUC that would predict POCD was 126.5 minute%. The reliable cut-off point was 20 minutes. This implies that clinicians need to be careful to prevent rSO2 desaturations of 20 minutes or more. A drop in the rSO2 value of more than 20% from baseline value requires action to counter the effect. Our study observations indicated that the moments often associated with rSO2 desaturation occurred during heart cannulation.

No correlation was found between the absolute value of rSO2 and the frequency of POCD. However, the pattern of rSO2 decreases during surgery may be associated with the POCD outcome. Clinicians need to be vigilant for drops in rSO2 value of more than 20% from baseline and to take action to ensure short desaturation durations. NIRS can be a useful modality for intraoperative monitoring to avoid POCD following open-heart surgery.