Objective: To investigate the diagnostic efficacy and predictive value of combined lipoprotein laboratory indexes for atherosclerosis.

Methods: Clinical data of 250 patients with atherosclerosis admitted to Xianning central hospital, China from January 2015 to December 2018 and 80 healthy subjects on physical examination in the same period were analyzed retrospectively. Serological laboratory indices related to lipid metabolism were measured, and their diagnostic efficacy and predictive value for atherosclerosis were evaluated by univariate and multivariate statistical methods.

Conclusion: When being used to detect atherosclerosis, Lp-PLA2 combined with sd-LDL has better diagnostic efficacy than separate tests. Meanwhile, there is a correlation between their levels and the severity of disease, which can be used to predict the occurrence of atherosclerosis independently of other risk factors.

At present, ischaemic cardiovascular and cerebrovascular diseases have become one of major disease types threatening life safety of middle-aged and elderly people. As a chronic inflammatory lesion, atherosclerosis has been proven to play a critical role in the process of cardiovascular and cerebrovascular disease occurrence and progression.1 Atherosclerosis diagnosis mainly depends on imaging means, biomarkers clinical examination, and the diagnostic effect of conventional serum biomarker.2 sd-LDL belongs to one of subgroups of LDL, and its level is closely related to the occurrence and development of cardiovascular disease. Besides, it is more sensitive to coronary heart disease diagnosis than LDL. LP-PLA2 is a new blood vessel inflammatory biomarker, and its level increase will aggravate atherosclerosis.3,4 However, there is still no clear conclusion in the medical circle about the correlation of sd-LDL and LP-PLA2 with atherosclerosis and the improvement of atherosclerosis diagnostic effect by the combination of the two. This retrospective study was conducted to explore the diagnosis and prediction value of lipoprotein-related laboratory indices in atherosclerosis compared to a control group.

A total of 250 atherosclerosis patients treated in Xianning central hospital from January 2015 to December 2018 were selected as the study subjects whereas 80 healthy individuals underwent physical examination and were taken as controls. Exclusion criteria were cardiomyopathy, hypertensive heart disease, congenital heart disease, pulmonary heart disease, acute or chronic infection or inflammation, liver and kidney dysfunction, gestation, connective tissue disease, presence of a malignant tumour, rheumatic disease, intake of lipid lowering drugs, drug addiction, and incomplete clinical data. The research programme was approved by the ethics committee of the hospital. All patients and their family members signed the informed consent form.

The clinical data of both groups were retrospectively analyzed. Diagnosis of atherosclerosis was made by CTA or MRA. The healthy persons had no obvious vascular shadows.

Laboratory index detection method: All of the laboratory indices were tested by the central laboratory of our hospital, collected and analyzed by specially-assigned staff. The tests of LDL-C, TC, TG, hs-CRP, LP-PLA2 and sd-LDL were done with Beckman Coulter AU5800 Clinical Chemistry Analyzer. Three ml of fasting venous blood was drawn and centrifuged at the rate of 8000g for 5 minutes to extract the serum. Among them, sd-LDL was tested by peroxidase method, LP-PLA2 by rate method, hs-CRP by immunity transmission turbidity, LDL-C by surfactant removal method, TC by CHOD-POD method and TG by GPO-PAP method.

Statistical method: SPSS 20.0 was used to process the data. The measurement data were compared with LSD-t test and variance analysis, expressed with (x±s). The enumeration data were compared with c2 test, expressed with %. Logistic regression model was employed for multiple-factor analysis. Spearman method was used for correlation analysis. ROC was drawn and AUC was calculated to analyze the diagnosis effect. Test level a=0.05.

The differences in age and gender of both groups were not significant (P>0.05). In the atherosclerosis group, the levels of LP-PLA2, sd-LDL, LDL-C, TC, TG and hs-CRP were significantly higher than those of the control group (P<0.05), as shown in Table-1.

Correlation analysis verified that, TC and LDL-C are significantly correlated (r=0.84, P=0.00). To eliminate significantly correlated indices, the independent variables included the indices with statistical significance (except TC), gender and age. The dependent variable was atherosclerosis. Logistic regression model analysis showed that, the levels of LP-PLA2, sd-LDL and hs-CRP are independent factors influencing the occurrence of atherosclerosis (P<0.05), as shown in Table-2.

AUC of ROC of LP-PLA2 and sd-LDL detection was maximum. The diagnosis effect was higher than that of single use of other serum laboratory indices, as shown in Table-3.

The comparison difference of LP-PLA2 and sd-LDL level of atherosclerosis at different lesion position had no significance (P>0.05), as shown in Table-4. 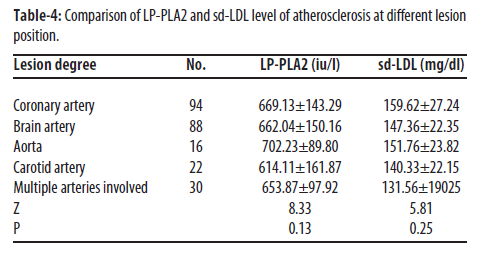 Multiple basic and clinical studies have verified that,5,6 vascular abnormal oxidative stress and chronic inflammatory injury are the key initiating factors for the occurrence and development of atherosclerosis and secondary cardiovascular and cerebrovascular diseases. The inflammatory cytokines represented by CRP and hs-CRP are closely related to atherosclerosis, clinical classification and long-term adverse events. A study has verified that,7 lipid metabolism disorder such as LDLD increase is the most important pathophysiological basis of atherosclerosis occurrence. But in the practical clinical diagnosis process, the above conventional laboratory indices cannot accurately reflect the occurrence of atherosclerosis in the early stage.8 Identifying laboratory indices for achieving early diagnosis and treatment of atherosclerosis has become a focused issue of in medical practice.

In accordance with particle density and diameter of LDL micromolecule, LDL can be divided into different subgroups. sd-LDL is the main component of LDL3-7 subgroup. An overseas study indicates that,9 sd-LDL level abnormity is more closely related to the occurrence and severity of atherosclerosis. The expression level of LP-PLA2 obviously rises in atherosclerosis patients. It is reported that,10 mPLA2 detection can reflect instability of atherosclerotic plaque and the severity of coronary heart disease.

Abnormal CRP and hs-CRP level lead to chronic vascular inflammation, which is considered to be one of main mechanisms of atherosclerosis. It has been verified that LDL-C, TC and TG disorder could reflect lipidosis of arteries, indirectly indicating the possibility of atherosclerotic plaque formation.11 Currently, LDL-C, TC, TG and hs-CRP are monitored for the suspected atherosclerosis patients, and they can be used for auxiliary diagnosis and therapeutic effect evaluation. In this study, the levels of LP-PLA2, sd-LDL, LDL-C, TC, TG and hs-CRP in atherosclerosis group were significantly higher than those of healthy group (P<0.05), indicating that the abnormality of the above indices can predict atherosclerosis, which conforms to previous reports.12 Logistic regression model analysis showed that, the levels of LP-PLA2, sd-LDL and hs-CRP are independent factors influencing the occurrence of atherosclerosis (P<0.05). LDL-C, TC and TG are not independent risk factors of atherosclerosis prediction, with low diagnostic specificity. Although hs-CRP is verified to be an independent risk factor for the prediction of atherosclerosis, ROC verifies that its diagnostic specificity is only 52.76, AUC=0.63, indicating that the diagnosis effect of single use is poor. Compared with hs-CRP, LP-PLA2 and sd-LDL have higher diagnostic specificity. Meanwhile, AUC of ROC of LP-PLA2 and sd-LDL detection was maximum. The diagnosis effect was higher than that of single use of other serum laboratory indexes. This further indicates LP-PLA2 combined with sd-LDL has a higher diagnostic index on detecting atherosclerosis and contributes to lowering clinical defection omission and excess diagnosis risk.

This study also has certain limitations: (1) small sample size, monocentric and non-foresight design may lead to result bias; (2) the detection kit manufacturers are relatively single; (3) the grouping of research objects is only based on clinical examination results, and the morbidity and severity of disease fail to be overall assessed; (4) there are many factors influencing atherosclerosis, and the indexes included in this study are relatively limited.

In conclusion, the diagnostic effect of LP-PLA2 combined with sd-LDL in atherosclerosis is better than that of single detection. Besides, LP-PLA2 and sd-LDL are related to the lesion degree, and they can be used to predict the occurrence of atherosclerosis, independent of other dangerous factors.

The study patients could not be matched with a similar number of controls which could give a bias to the results.

Disclaimer: The manuscript has not been published or submitted for publication elsewhere.

Conflict of Interest: none to declare.

Funding Disclosure: none to declare.