Objective: To study the effect of early interventional rehabilitation training with delayed rehabilitation on the recovery of motor function in patients with cerebral haemorrhage.

Methods: A total of 82 patients with cerebral haemorrhage admitted to the Hai'an People's Hospital, Jiangsu, China during the period January 2014 to January 2015 were selected for the study. They were randomized into interventional group and control group with 41 cases in each group. Patients in the early interventional group received early intervention measures 2-7days after the onset, while patients in the control group were given rehabilitation training within 3-4 weeks after the onset. The changes in motor function, neurological function and daily living ability of the two groups before and after rehabilitation training were evaluated.

Cerebral haemorrhage refers to haemorrhage caused by rupture of blood vessels without any trauma to the brain parenchyma, which accounts for 20% to 30% of all strokes, with an acute phase mortality of 30% to 40%. The causes are mainly related to the pathological changes of cerebral blood vessels, such as hyperlipidaemia, diabetes, hypertension, aging of blood vessels and smoking. Patients with cerebral haemorrhage tend to have sudden onset due to emotional agitation and excessive exertion. The early mortality rate is high. Most survivors have different degrees of sequelae such as dyskinesia, cognitive impairment, and dysphagia.1 Common causes are hypertension associated with arteriosclerosis, microaneurysm or microhaemangioma, with other factors including cerebral vascular malformation, meningeal arteriovenous malformation, amyloid cerebrovascular disease, cystic haemangioma, intracranial venous thrombosis, specific arteritis, mycotic arteritis, fungal arteritis and arterial anatomic variation, vasculitis, and haemorrhagic brain tumour. In addition, blood factors include anticoagulation, antiplatelet or thrombolytic therapy, haemophilus infection, leukaemia, thrombotic thrombocytopenia, intracranial tumours, alcoholism and sympathetic nerve stimulants. The inducing factors include excessive exertion, climate change, smoking, alcohol abuse, excessive salt intake, obesity, blood pressure fluctuation, emotional agitation and overwork.2

Hypertensive cerebral haemorrhage often occurs at the age of 50-70 years, more in males than females, which is prone to onset during winter and spring, usually in the event of exertion and emotional excitement. There is no sign of bleeding before haemorrhage, and half of the patients complain of a severe headache and vomiting is commonly present. The blood pressure increases significantly after haemorrhage and clinical symptoms often appear in quick succession. The clinical symptoms and signs vary according to the location and amount of bleeding. Mild hemiplegia caused by haemorrhage in the thalamus and internal capsule is a common early symptom. A few cases have epileptic seizures, which are often focal. Severe cases quickly shift into confusion or coma.3 Clinical examination mainly includes the Cerebrospinal fluid (CSF) examination. Those who have a definite diagnosis do not usually require the CSF test to prevent cerebral hernia. However, when the brain CT scan or brain MRI examination is not accessible, lumbar puncture still has a certain diagnostic value. The intracranial pressure is generally high after cerebral haemorrhage due to brain oedema.4 In 80% of patients, cerebrospinal fluid is bloody or yellow after 6 hours of onset. However, the possibility of cerebral haemorrhage could not be completely ruled out, if the CSF is clear. Dehydrating agent is given to reduce intracranial pressure before surgery, and lumbar puncture is contra-indicated if the intracranial pressure is increased or there is a possibility of cerebral hernia.5 Brain CT scan can clearly show the location of bleeding, the amount of bleeding, and the shape of the haematoma. It can also show whether the haematoma extends into the ventricles or whether there is the low-density oedema band and mass effect around the haematoma. Most of the lesions are round or oval along with high-density areas with clear boundaries. The ventricle with a large amount of haemorrhage will look like a high-density cast mould and the ventricle is widened, as shown in Figure-1.

A total of 82 patients with cerebral haemorrhage admitted to the hospital from January 2014 to January 2015 were included in the study. Based on the preliminary test results of 10, patients with cerebral haemorrhage were evaluated by FMA scale, neurological impairment scale, and Barthel index, respectively. After comparing the three methods, the mean value k of test was 0.856. According to the results of literature 0.624, the sample size estimation equation of the two groups of measurement data was as follows.

They were divided into early intervention group and control group according to the random number method with 41 cases in each group. The study was approved by the hospital ethics committee and all the participants gave an informed consent. The inclusion criteria were:

1. The clinical diagnosis of cerebral haemorrhage was consistent with the diagnostic criteria according to the 2007 guidelines for the treatment of spontaneous intracerebral haemorrhage in adults;7 2. It is the first episode for the patient with the location I the basal nucleus.8 3. All patients were diagnosed by magnetic resonance imaging (MRI) or CT. 4. All patients were fully conscious and could follow the instructions of the medical staff to complete the study.

All patients had the same treatment for intervention training. The treatment plans included the use of the joint programme Bobath9 and the application of psychotropic drugs. The early intervention group were given training, starting 2-7 days after the onset of the symptoms when neurological function and vital signs were stable. The patients in the control group received late interventional rehabilitation training 3-4 weeks after the onset of the stroke. The steps of interventional rehabilitation training were as follows: 1. Adjust the position of the patients at rest, with lying positions for selection including recumbent position on the healthy side, supine position and recumbent position on the affected side. Attention was paid to avoiding the compression of the affected limbs and the patients' posture adjusted timely and effectively. 2. Passive and active exercise training was performed for the patients' affected limbs, paying particular attention to the training of naked joints, hip joints, hand joints, and shoulder joints (as shown in Figure 2); 3. 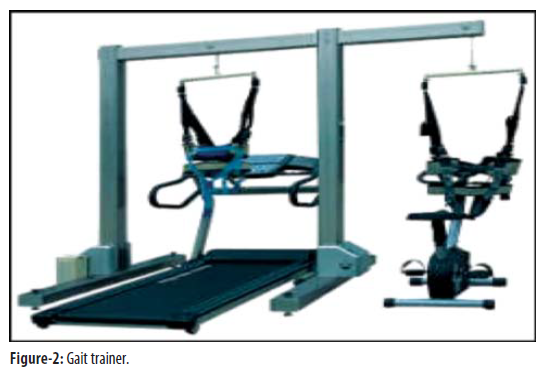 The patients were guided to effectively adjust the position to turn over in bed and to maintain the balance at a standing or sitting position. Gait training was provided at any time needed;10 4. Training for carrying out daily living ability to the patients, so that they could eat, wash, dress and go to the toilet independently. In the first half of the treatment, guidance was given on the patients' body movements, sit-ups, back and forth movements, turning over in bed and others once a day for about 45 minutes, based on their actual recovery status. Secondly, guidance was gradually given on the basic skills such as self-standing and walking, so that the patients could stand and walk on their own.

SPSS 22.0 statistical software was used for analysis, and the measurement data was expressed as mean ± standard deviation. The mean of each sample was compared using t-test or analysis of variance. P<0.5 was considered statistically significant.13-15

The difference in FMA scores of upper and lower limbs FUG 1m-m before and after training was compared between the control group and the observation group, and the results are shown in Figure-3. 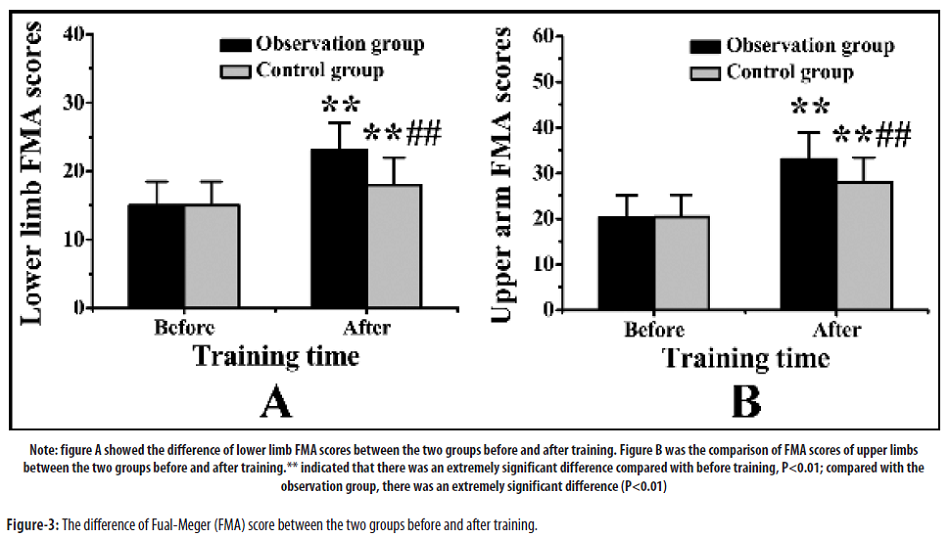 The scores of neurological defects in the two groups before and after training were compared, and the results were shown in Figure-4. 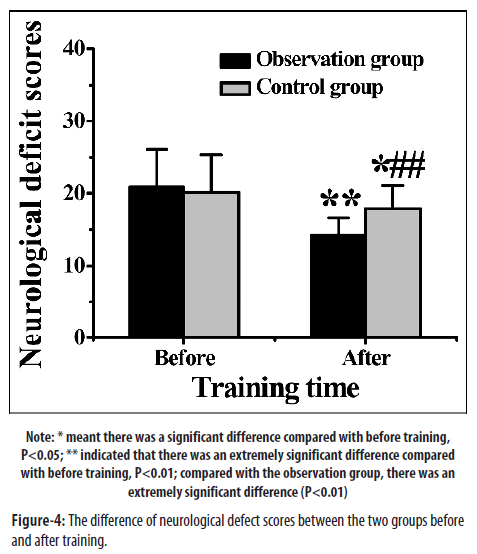 The score of Barthel index before and after training was compared between the two groups, and the results were shown in Figure-5. 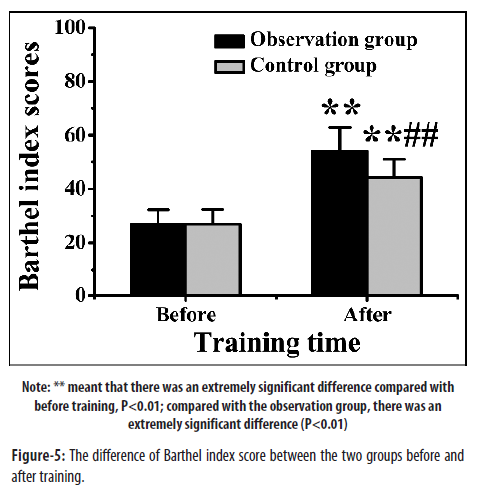 Rehabilitation training comprised of re-learning the skills of daily life. During the training, patients were required to reasonably and effectively adapt to the current environment. Early rehabilitation training is beneficial to patients' recovery after surgery and improve the quality of life. A shorter onset time was advantageous for the brain plasticity which refers to the adaptability of the brain by modifying its function and structure to the injury.

Many animal researches have verified the effect of exercise training on cerebral haemorrhage. It has been proved that motor skill training can improve the motor function after cerebral haemorrhage in rats, and enhance the neural activity and synaptic plasticity of striatum and sensorimotor cortex.16 A case report on a 57 year old man with severe upper extremity disability after right frontoparietal haemorrhagic stroke of 9 months history, reported clinically significant improvements in arm injury (strength), activity (arm and hand tasks) and participation (arm use in daily tasks). This helped to achieve independence, ensure family and user friendliness, maintain motivation for adherence and move and integrate towards daily life.17 Liu et al. found that early rehabilitation training combined with nursing intervention could effectively improve postoperative Fual-Meyer score of patients with hypertensive intracerebral haemorrhage and reduce the probability of postoperative adverse reactions.18 In this research, it showed that early rehabilitation training for patients with spontaneous intracerebral haemorrhage could effectively improve FMA score and Barthel index, which was consistent with the results of Poltavskaya et al.19

Cerebral haemorrhage is a series of devastating cerebrovascular diseases with high mortality, high morbidity and high recurrence rate. Intracerebral haemorrhage accounts for 15-20% of stroke subtypes, with poor prognosis.24 The mortality rate of patients with cerebral haemorrhage ranges from 40% to 50%, of which at least half occurs in the first two days, and 75% of the survivors could not live independently after one year. With the aging of population, stroke is more commonly encountered in many countries. Its long-term sequelae can be relieved by early reperfusion in stroke unit, treatment of complications in early rehabilitation center and rapid functional recovery. In terms of functional recovery, progress has been made in physiology of early rehabilitation training and nerve enhancement, supportive drug therapy and robotics. On the basis of current scientific knowledge, early rehabilitation treatment in the acute and middle stage of stroke can provide the best functional effect for patients.

Disclaimer: I hereby declare that this research paper is my own and autonomous work. All sources and aids used have been indicated as such. All texts either quoted directly or paraphrased have been indicated by in-text citations. Full bibliographic details are given in the reference list which also contains internet sources. This work has not been submitted to any other journal for consideration.