Pelvic fractures represents high energy trauma with associated other organ injuries including intra-abdominal injuries, haemorrhage and extremity injuries. Anatomical location of genitourinary structures makes them vulnerable to injury with pelvic fracture. Incidence of sexual dysfunction varies in literature with 5% incidence of dysfunction in patients without urethral injury and 42% with urethral injuries. Hence in pelvic fracture, erectile dysfunction may be due to neurogenic, vascular, corporal and psychogenic injury. In this narrative review of targeted English literature from all level of evidences, which is written and supervised by experienced specialized orthopaedic, trauma and urology surgeons who were among the pioneers of conducting pelvis fracture management workshops in the country, we aim to describe the mechanism that can lead to erectile dysfunction after pelvic fracture, assessment principles, decision-making and preoperative planning and indications of operative managements.

Pelvic fractures represents high energy trauma with associated other organ injuries including intra-abdominal injuries, haemorrhage and extremity injuries.1,2 Anatomical location of genitourinary structures makes them vulnerable to injury with pelvic fracture. Incidence of bladder and urethral injures varies from 6 to 15% depending of severity of injury.3-5 The most common mechanism of injury is motor vehicle accidents. However comparative minor injuries can damage vascular and neurological structures distributing to genitalia can result in sexual dysfunction. Female urethra is short and protected by vagina, hence less vulnerable to injuries than male urethra with reported incidence of 0 to 5%.6 Patients with polytrauma may undergo multiple surgeries which increases further risk of urogenital injuries. Erectile dysfunction is defined as inability to achieve or maintain an erection adequate for sexual satisfaction. Incidence of sexual dysfunction varies in literature.7 In 1975, King published his data of 90 patients with 5% incidence of dysfunction in patients without urethral injury and 42% with urethral injuries.8 Literature shows an association of between urethral disruptions resulting in impotence. Prostatic urethra is a fixed structure between urogenital diaphragm and pubic rami and symphysis with supporting ligaments, thereby vulnerable to shear forces rather than by direct trauma with bony fragments. In normal erection, sexual stimulation releases neurotransmitters from cavernous nerves, resulting in dilatation of cavernosal arteries and influx of blood flow which compresses venous plexuses, reducing outflow. This results in erection.9,10 Thus shows that normal erection requires functioning nervous system, increased arterial flow and decrease venous outflow. Hence in pelvic fracture, erectile dysfunction may be due to neurogenic, vascular, corporal and psychogenic injury. We aim to describe the mechanism that can lead to erectile dysfunction after pelvic fracture, assessment principles, decision-making and preoperative planning and indications of operative managements in this review.

Anatomy: The work of Walsh and Donker demonstrate track of cavernosal nerves arising from pelvic plexus and reached prostate postero-laterally.11 These nerves traverse urogenital diaphragm alongwith membranous urethra before it reaches the corpora cavernosa. Because of this close relationship to prostate and urethra, shearing injury poses a risk to these nerves. S2-4 nerves give rise to nerves supplying cavernous nerves, these can be damaged in injury to posterior pelvis and sacroiliac joint.12,13 Incidence varies from less than one percent to more than 30 percent.14,15 Majeed confirmed neurological injuries by EMG studies in clinically evident patients. He found that 33% patients with unstable pelvis fracture developed erectile dysfunction.14 All patients showed atleast partial recovery upto 12 months with impotency in 13 whereas 6 patients were cured. There is no specific test available to diagnose neurogenic erectile dysfunction. However it is suggested in patients having normal haemodynamic studies but abnormal nocturnal tumescence.16 In nocturnal tumescence, a spontaneous erection occurs during sleep or when waking up. It occurs three to five times in normal men during sleep (commonly in rapid eye movements) indicating penile health. According to Bancroft, noradrenergic neurons of locus ceruleus have a negative effect on erection and stops during rapid eye movement sleep thereby allowing testosterone-related excitation resulting in nocturnal penile tumescence.17 The Internal iliac artery gives rise to pudendal arteries which further branch into common penile and cavernosal arteries (Figure A and B showing anatomy of penis including vessels). 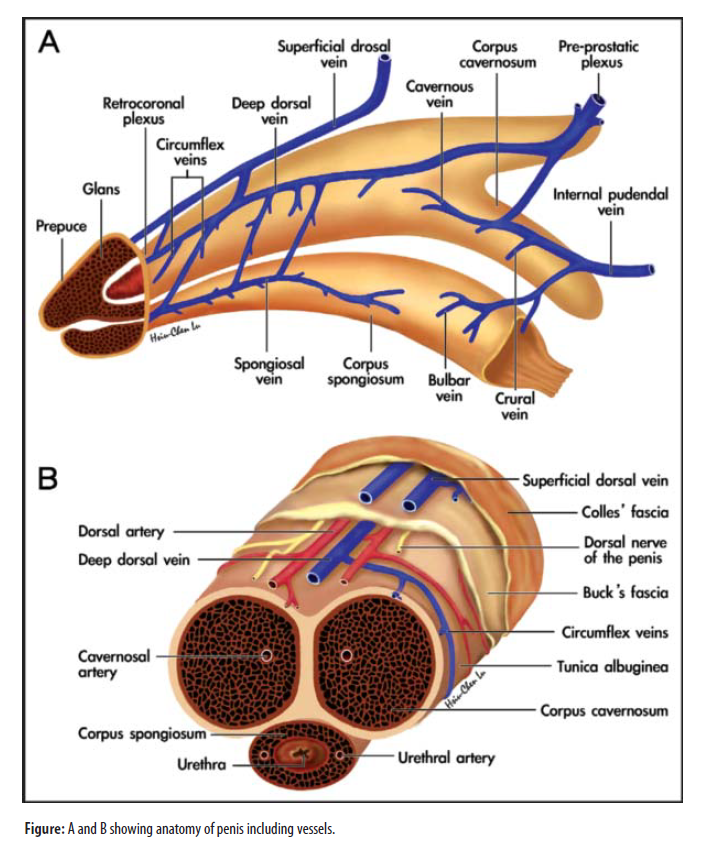 Severe trauma, compression injury or laceration can damage these vessels and also embolization of internal iliac vessels can be a cause of dysfunction.18 Veno-occlusive failure mechanism is also a contributing factor of dysfunction. This mechanism has not been extensively demonstrated as compared to arterial and nervous part. Inadequate and poor results would be encountered by neglecting this mechanism. Veno-occlusive mechanism depends upon trabecular fibroelastic compliance and smooth muscle cells tone. Literature postulated that trabecular pattern may be damaged by either direct injury or during repair of the wound. This may results in inability to relax, expand and compress the subtunical venules to prevent venous leak and maintain erection. Sharlip19 found impotency in three patients with obliteration of internal pudendal arteries at urogenital diaphragm. Later on even collaterals were formed with retrograde filling of penile arteries without promising effects. Treatment of impotency with excision of traumatic arterio-venous fistula among internal iliac vessels also has been described in literature. Selective internal pudendal arteriography was performed by Levine in impotent patients.20 Nintypercent of patients with pelvic fracture were found with pudendal or common penile lesion and thirty five percent with fracture. As pelvic trauma is caused by high energy with associated lesions, Patients need treatment for long periods of time. Ten percent of patients were found to develop posttraumatic stress disorders. Literature showed eighty percent of these patients having sexual dysfunction. Patients on treatment also have impotency.21

Patient evaluation: Patient evaluation includes comprehensive history, proper physical (local and general) and psychological examination. Co-morbid conditions like diabetes, vascular, neurological and medication should be sorted out. Sexual history including how patient recognized the problem should be asked. It is important to inquire about association between dysfunction and trauma, subsequent treatment, duration of disease, difficulty in erection, quality of nocturnal and masturbatory erection and local symptoms. Psychogenic problem should be considered in the presence of nocturnal erection. The examination of secondary sexual characteristic and external genitalia has a paramount importance in patient evaluation.22 Apart from baseline investigations, blood glucose level, lipid and serum testosterone level should be assessed. Vascular injuries can be identified with colour Doppler, duplex Ultrasonography, dynamic infusion cavernosometry and arteriography. Neurophysiological testing are not routinely performed due to none specificity for autonomic nerve damage. Nocturnal penile tumescence is helpful in psychogenic patients.21 MRI determines soft tissue pathology (corpora).23

1- Pharmacological test: Prostaglandin 1E is injected in corpora resulting in erection in 10 to 20 minutes. Deformity can be seen on erect penis. In case of pelvic fracture, vascular etiology can be expected in absence of response.24

2- Vascular component assessment Ultrasonography: Vascular anatomy and physiology of genitals can be investigated by duplex Ultrasonography. Two parameters are important including peak systolic (PSV) and end diastolic (EDV) velocities. These are calculated in penile (cavernosal) arteries. Value of PSV less than 25 cm/s are abnormal showing reduced blood flow while more than 35 cm/s are normal. Veno-occlusive dysfunction is determined by increased EDV indicating failure of smooth muscle relaxation. This could be due to neurogenic or inflow disorder.

Dynamic infusion cavernosometry: This is used to assess smooth muscle functions in patients with vascular injury. This is invasive and time consuming and designed for veno-occlusive functions.25

Arteriography: When ultrasound is suggestive of arterial injury and revascularization is planned, pudendal arteriography should be considered. Internal pudendal artery is cannulated through femoral puncture. Whole examination includes identification and localization of vascular lesion. This procedure can only be done when vascular surgical intervention is considered.26-28

Thermal threshold testing: This test is used to detect peripheral neuropathy. Abnormal sensitivities like in diabetes are noted inpatient with pelvic fracture. Disadvantage of it is that it detects sensory fiber rather than parasympathetic fibers of penile erection.29

Prevention of erectile dysfunction: Initial management of urethral injuries has profound effects on development of dysfunction and long-term outcomes. There is no clear preference for treatment. Most of the centers prefer suprapubic catheterization for urinary diversion and delayed primary repair. After a delay of 6 to 8 weeks, antegrade urethrography is performed. In a incomplete lesion, healing may occur spontaneously. If patient is able to void, tube can be removed and patient is observed for stricture formation. Delayed end-to-end repair can be considered if stricture is found.32

Management: In early stages of recovery from pelvic fracture, patient is unable to resume sexual activities. As recovery occurs, this issue become evident and gains importance. It is observed that spontaneous sexual function returns in 20% of patients upto 18 months of injuries.

Phosphodiesterase Inhibitors: Treatment of sexual dysfunction has been revolutionized by sildenafil (Viagra). It inhibits phosphodiesterase (PDE) type 5, (an enzyme terminating action of cyclic guanine monophosphate in smooth muscle cells in penis). In the presence of normal vasculature and neurogenic pathways, it potentiates erectogenic signals and promotes normal erection. It is used to treat dysfunction regardless of cause. It can be used in some patients with pelvic fracture. As in radical retropubic prostatectomy, both cavernosal nerves are sacrificed, this drug remains ineffective. So it can be assumed that pelvic fracture patients have normal vasculature and nerve supply who respond to sildenafil. No study has been conducted to find effects. In contrary to this, those patients who are unable to respond to drug may have neurogenic or vascular lesions.33-35

Intracavernosal Injection: Prostaglandin E1 is commonly injected in corporal tissues for erection. This is used for patients who are non-respondent to oral therapy. Some patients are not satisfied with injection as it may cause penile pain or prolong erection which may require treatment. It indicated in neurogenic type dysfunction. Vasculogenic may not respond to injection.

Devices: Cavernous system is flooded with blood with vacuum pump placed over the penis. A band is applied at base to maintain erection. It is a non-invasive method.

Penile Prosthesis: Various implants are used for restoration of potency. A recent used prosthesis has inflateable cylinder in corporal tissue along with a pump and saline reservoir in scrotum. This is easy to use and a reliable method however in young patients it is less accepted.36

Penile Revascularization: In arteriogenic impotency, microsurgical penile revascularization is performed with success rate varying between 16% to 74%. Before any intervention, the vascular lesion should be localized and indentified carefully. Patients with focal injury are ideal candidates for surgery. Veno-occlusive incompetency is a relative contra-indication to surgery as it represents permanent damage to smooth muscle cells. Chronic pain, loss of sensation, penile shortening and failure of graft are common complications and patient should be counseled before intervention.37,38

With modernization and advancement in the treatment method of pelvis fracture, erectile dysfunction is more commonly encountered than previously. These problems should be addressed during follow up as it is neglected in our society. Medical treatment as described above is acceptable with few side effects. Surgical treatment is reserved for a specific group of patients with focal vascular injury.

This is a narrative review of targeted literature simplifying this complex topic from its different angles. This work was done and supervised by experienced specialized orthopaedic, trauma and urology surgeons, who were among the pioneers of conducting pelvis fracture management workshops in the country in the last decade, along with experts from clinical research and epidemiology. The review highlights this sensitive issue after these common injuries to the pelvis and its management protocols. The main limitation of the study is that we did not performa systematic review of all present literature. We recommend systematic reviews and meta-analyses focusing on the management of such injuries and including, but not limited to, associated injuries and the long term outcomes of surgical Vs conservative management.

ERC Requirement: Exempted as it is a narrative review article.

Management of Laryngotracheal trauma: A review of current trends and future Directions

A comprehensive basic understanding of pelvis and acetabular fractures after high-energy trauma with associated injuries: Narrative review of targeted literature