Background: Outcomes of trauma victims largely depends upon available resources, not only in terms of location of high level trauma center near the area where incident takes place but also on staff and equipment available at that particular center at that particular time. This study used retrospective charts review to ascertain whether trauma patients presenting during the night time would have delayed in establishing injuries after necessary investigations and higher in-hospital mortality than those trauma patients arriving during the day time at our hospital.

Methods: This was a cross sectional study, conducted in department of Surgery, Aga Khan University Hospital, Karachi. Data was obtained from patients charts by a single investigator. By random sampling technique, 146 patients admitted between 1st January 2018 to 31st December 2018inthe Emergency Department of the Aga Khan University Hospital, Karachi were included. Patients were placed into two groups. Those arriving in hospital from 7 am to 7 pm were labeled as day time group while those who presented from 7 pm to 7 am were labeled as night time group. Difference in mortality in each group and time required for carrying out investigations and admissions to definite care were recorded and compared among both groups.

Results: A total of 146 patient charts were reviewed, with 73 patients each in both day time (DT) and night time (NT) groups. Out of 146 trauma victims 123(82.2%) were male and 23(17.8%) were female. Mean age in our population was 37.4 years (±14.3). Road traffic accident (RTA) was the most common cause in 121 patients (82.9%). Time required to conduct trauma services was shorter and significant in DT group as compared to NT group. There was significant difference observed in time required for admission in each group, with mean of 6hours and 40 minutes ± 4 hours,22 minutes in DT group and 8 hours, 36 minutes (± 5 hours,11 minutes in NT group (p = 0.03). However there was no significant difference in mortality observed in both groups.

Conclusion: In our hospital time of arrival has no impact on overall mortality of trauma patients. However time to carryout necessary investigations for stable trauma patients and their admissions to definite care is longer as compared to day time arrival of emergency trauma patients.

Trauma is a leading cause of death in the world.1 Traumatic Injury is an increasingly significant health problem throughout the universe. Every day, 16 000 people die from injuries and for every person who dies, several thousand more are injured, many of them with permanent disabilities. Injury accounts for 16% of the global burden of disease. Approximately 90% of the total burden of injury occurs in low and middle-income countries.2 Traumatic injuries, whether in form of violence or accidents are very common in such countries. Poverty, lack of employment, poor law and order situation, bad infrastructure of roads leading to major road traffic accidents, are the some contributing factors for increasing cases of trauma victims admitted to hospitals in low and middle-income countries.3 Injuries and trauma are a major cause of mortality and morbidity in Pakistan, a low income South Asian developing country. Trauma strikes at all ages. Young and working age adults are more likely to be injured, but if injury strikes at geriatric age the death rate is much higher. Beside its high mortality rate, traumatic injuries are the main contributor to lifelong disabilities, with the majority of the burden falling on younger people in the population.4 Outcomes of trauma victims largely depends upon available resources, not only in terms of location of high level trauma center near the area where incident takes place but also on staff and equipment available at that center at that particular time.5 Although some level I trauma centers which have all essential facilities available round the clock, for managing critically injured patients, are very often crowded by non-traumatic emergencies or elective procedures because of their multidisciplinary nature. It is also believed that available staff and doctors and especially senior doctors of registrar or consultant level are less in number at night time to carryout essential workup and to establish the definite diagnosis. A number of studies have looked at survival patterns and outcomes in patients presenting to the hospital during "off-hours," defined as either weekends or nights.6,7 This study used retrospective charts review to ascertain whether trauma patients presenting during the night time would have a delay in establishing injuries after necessary investigations and higher in-hospital mortality than those trauma patients arriving during the day time. It was hypothesized that trauma patients presenting during the night would have required more time to establish diagnosis of all forms of traumatic injuries and higher inhospital mortality rates than similar patients arriving during the day.

The target population for this study were patients 18 years of age or older on whom trauma rush call was generated. Patients transferred to another hospital or left against medical advice were excluded. This cross sectional study was designed to evaluate the association of hospital arrival time and overall management of trauma patients admitted from 1st January, 2018 to 31st December 2018, at the Aga Khan University Hospital. In our institution, trauma patients are evaluated and resuscitated in trauma Rhesus, an area specially designed with all forms of equipment required for managing critically injured patients. Multiple injured patients are initially seen by the Emergency physician and later by the trauma team that includes members from General surgery, Orthopaedic, Neurosurgery and Cardiothoracic surgery team upon activation of trauma rush call. This trauma team is lead by General surgery instructor, who has completed core training in general surgery at day time (DT), while general surgery chief resident, who is in the last year of residency during the night time (NT). It was hypothesized that patients who arrived in the night time (7 p.m. to 7 a.m.) would have a delay in establishing definite diagnosis of traumatic injuries and higher in-hospital mortality rates than patients arriving during the day (7 a.m. to 7 p.m.). Data was obtained from chart reviews by a single investigator which included 146 patients by a random sampling technique, admitted to the emergency department of the Aga Khan University Hospital Karachi from 1st January 2018 to 31st December 2018. Data was analyzed by using SPSS version 22. Analysis of Continuous variable i.e. age, time required for conducting trauma series, whole body CT scan, extremity X-rays and admission to definite care were recorded as Mean ± SD, while the changes in quantitative variables in the 2 groups were assessed by independent t test. Qualitative variables such as; gender, mechanism of trauma, level of immediate care and mortality, were expressed in frequency and percentages and the changes in the qualitative variables in the 2 groups were assessed by chi square test. p value of < 0.05 was considered as significant. 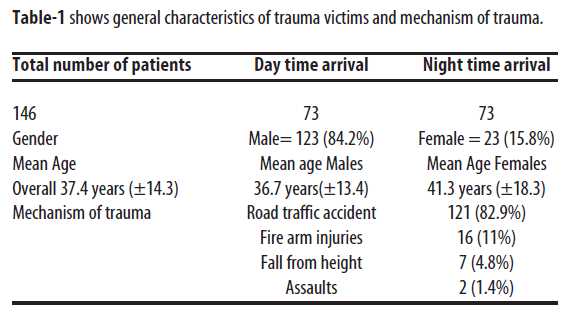 Most of our patients, 110 (75.3%) were managed in wards, which included both special care unit and general ward, while 26(17.8%) patients required immediate admission to surgical intensive care unit (SICU) and 10 (6.8%) were immediately taken to the operation room (OR) owing to their, either life or limb threatening injuries. General surgery, which in our institution is also regarded as trauma team, admitted 98(67.1%) of trauma patients. The remaining patients were admitted in Neurosurgery, Orthopaedics, Cardiothoracic units, Vascular surgery and Plastic surgery after clearance from the other teams (Table-2). 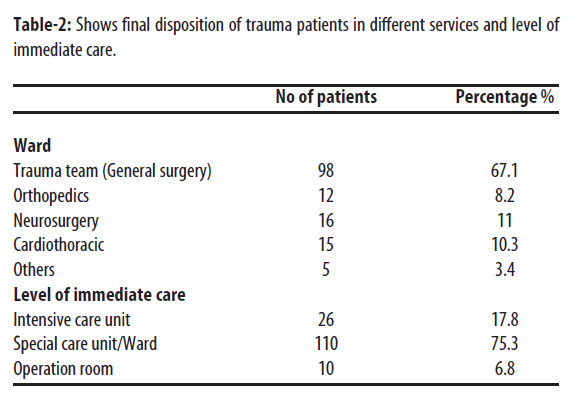 Successful trauma systems depend on the triage to identify patients with severe injuries who could benefit by resuscitation from the trauma team. The establishment of a trauma system is a reasonable way to improve outcomes in severely injured patients.8 Our results have shown that time of arrival to emergency unit does not contribute to any added risk of mortality at our institution which is fully specialized in managing critically injured patients. At our institution, trauma team remains functional 24/7 alongside our radiology department, interventional radiology, and critical care specialist and operation room facilities. Our results however do show that evaluation of trauma patients with trauma series, which includes FAST, chest x-ray and pelvic x-ray might get late in night time, especially in those patients who do not present with immediate life or limb threatening injuries. This effect might be because of less no of ancillary staff at night time. Similarly admission of relatively stable patients to the ward at night, often gets significantly delayed likely because of shorter teams, less number of medical and non-medical staff, involved in admitting and transportation of patients to definite units. A similar study was done in major acute care hospitals in the Calgary Health Region, Canada, between April 1, 2002 and March 31, 2006. The in-hospital case-fatality rate was 11%, and was not significantly different during daytime 37% evening 30%, and night 36% admissions (p = 0.53).8 Another study done in Capetown, South Africa at The Khayelitsha Hospital Emergency Centre, where database was retrospectively analyzed for trauma-related patients presenting to the resuscitation area between 1 November 2014 and 30 April 2015 concluded that method of transport, hospital arrival time and pre-hospital transport time intervals did not have a substantially measurable effect on in-hospital mortality.9 Trauma places an immense burden on the resuscitation area at Aga Khan University Hospital, with young men being mostly affected. Arrival time in emergency did not have a substantially measurable effect on in-hospital mortality. More studies with larger samples are suggested since the events of the primary outcome in this study were too few to find any statistically significant effects of the parameters that were analyzed.

In high level trauma centre, designated in managing critically injured patients, time of arrival has no significant effect on mortality. However admission to definite care or investigations for stable patients might get delayed at night.

Ethics Approval and Consent to Participate: Informed consent from patient and exemption from Hospital review committee was sought.

Availability of Data and Material: All data will be available on request, keeping anonymity of patients.

Funding: There is no funding body in this research.

Non-operative treatment of hepatic trauma: A changing paradigm. A Six year review of liver trauma patient in a single institute

The spectrum of injuries from motorcycle induced road traffic accidents from level one trauma center: A prospective observational study