Objective: To measure the effectiveness of the workshop in enhancing the knowledge and skills of the non-vascular surgeons in dealing with traumatic vascular emergencies.

Methodology: It was a Quasi-experimental pre-post design study conducted at Section of Vascular Surgery, Aga Khan University Hospital, Karachi (Pakistan) in February 2019. One-day workshop was conducted to enhance the knowledge and operative skills of the non-vascular surgeons in managing traumatic vascular emergencies. A written test and course evaluation survey were used to evaluate the effectiveness of the course in achieving the desired objectives.

Results: Total of 21 participants attended the workshop with mean age of 29 ± 6.06 years. Majority of participants 15 (71%) were surgery residents from different subspecialties. Only 3 (14%) had prior exposure in Vascular Surgery. Mean pretest score was 11.9 ± 4.27 (59.52% ± 21.3) which improved to 16.14 ± 3.69 (81.6% ± 16.6). Gain in knowledge was measured using paired t-test and there was 21% of gain in knowledge of the participants compared between the pretest and posttest score. Overall participants found this workshop to be very useful in refining their skills and learning innovative techniques in managing vascular emergencies.

Acute limb ischaemia due to trauma accounts for approximately 0.5-4% of total civilian trauma admission.1 Other than trauma the next common vascular emergency presenting is acute thromboembolic limb ischaemia, the incidence of which being 1.5 cases per 10,000 persons per year globally.2 Early diagnosis and intervention are paramount in improving the likelihood of a favourable outcome for traumatic and non-traumatic vascular emergencies.3 To deal these circumstances efficiently , acquisition of relevant knowledge and skills are utmost important.4 If measures are not taken at an appropriate time, it can result in permanent limb disability and even limb loss. Increase in demand for vascular surgeons dealing with the threatened limbs has been noticed dramatically worldwide due to rise in the overall aging population, improved life expectancy and increased prevalence of cardiovascular diseases.5 However, there is a mismatch of demand and supply of Vascular Surgeons and services globally and the situation is more critical in Pakistan.6,7 It is one of the emerging specialty in the region with little workforce. There is little formal teaching about vascular diseases at the undergraduate level, and even at postgraduate level, most of the surgical training programme in the country lacksvascular surgery rotations.8,9 Majority of vascular emergencies are being dealt by the non-vascular surgeons. There is evidence that non-vascular surgeons can deal vascular emergencies if given the appropriate knowledge and skills set.10,11 The most commonly used strategies for providing this include simulation based trainings and dedicated workshops11 however; there is little evidence in local literature on the effectiveness of workshops/short courses. The objective of the present study was to assess the gain in knowledge of non-vascular surgeons about common traumatic vascular emergencies after attending a day's workshop.

This quasi-experimental, one-group pre-test/post-test study was conducted at the section of Vascular Surgery, Aga Khan University Hospital, Karachi, (Pakistan) in a oneday workshop "Emergency Vascular Surgery Course for Non Vascular Surgeons" in February 2019. The workshop comprised of two parts. Initial part consisted of interactive lectures providing theoretical knowledge related to common vascular emergencies such as acute limb ischaemia, peripheral and abdominal vascular trauma and damage control maneuvers in dealing with these emergencies. This was followed by video demonstration and hands-on training on various vascular surgical skills on bovine models. That included vessel exposure and handling, performing arteriotomy and primary closure, performing end-to-end anastomosis, shunt placement as a damage control maneuver, performing embolectomy and doing fasciotomy. A single-group, pretest/posttest design was used to evaluate the improvement in knowledge of the course participants. The test consisting of 20 one-best type multiple choice questions (MCQs) which were developed by one of the course faculty to be used both as pre and the post-test. The questions were carefully constructed to assess the clinical judgment, application, and synthesis of knowledge related to content of the workshop. The questions were reviewed for clarity and agreement on key by another faculty member. An example of one-best type MCQ is given below:

Q: A 35 years old lady, presented with Glasgow Coma Score (GCS) of 10 after a road traffic accident. She remained hypotensive despite fluid resuscitation. Her left lower leg was severely mangled with obvious open fractures and extensive soft tissue injury. The patient could not move the limb, pulses were absent, and the limb was cold on touch. What was the best way to manage the injured limb?

A. Externally fixate the fractures followed by revascularization

B. Revascularize the limb, then externally fixate

A 5-point Likert-type survey was also administered to measure participants' satisfaction with the workshop. Verbal informed consent was taken from all the participants. Descriptive analysis including mean, percentages, and standard deviation (SD) were calculated using IBM Statistical Package for the Social Sciences (IBM SPSS Statistics; Armonk, NY, USA) version 20.0. Gain in knowledge was defined as difference between the post-test and the pre-test scores and was taken as a measure of course effectiveness and calculated using paired samples t-test. One-way ANOVA was used to measure difference in test scores across groups. A pvalue of <0.05 was taken as significant. 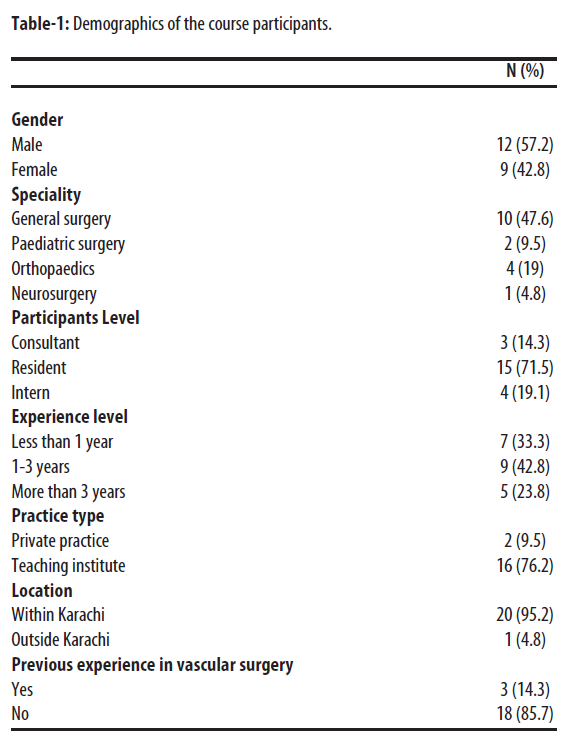 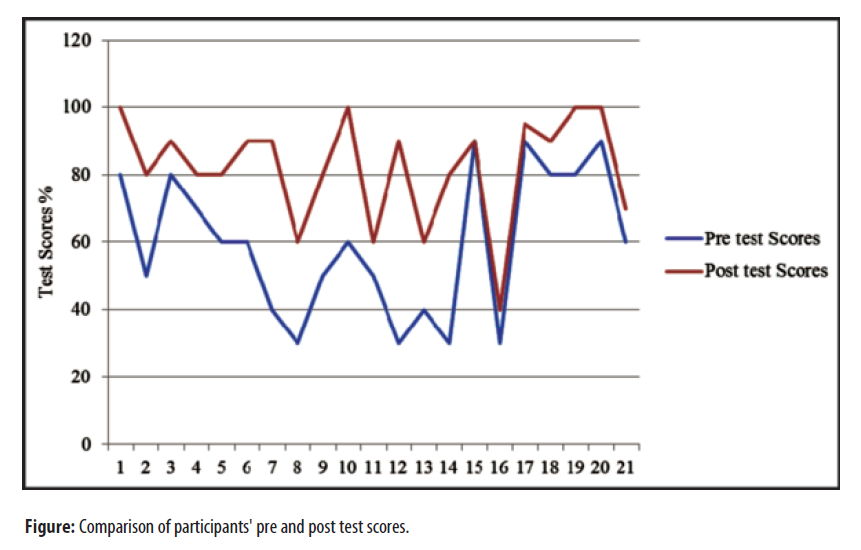 The improvement in mean test scores (gain in knowledge) was observed across the whole group in the subgroup analysis and no significant difference was observed on the basis of difference in age, gender, specialty and prior experience. A short survey using 5-point Likert type questionnaire was conducted at the end of the activity to assess participants' self-perceived satisfaction with acquisition of skills. Participants found workshop useful in improving their knowledge and skills in managing vascular emergencies. Majority of the participants graded the activity as very good or excellent. Evaluation scores (%) are given in Table-3.

Workshops/short courses on situations dealt on a regular basis by medical professional give them a good opportunity to share their difficulties in dealing these situations and refine their skills. This was reflected by the increase in knowledge by 22.6% of participants as observed in this study by a pretest and posttest evaluation, and also an ample amount of the trainees (71.5%) who attended this workshop felt the need of orienting themselves with the vascular emergencies as there has been a recent rise in these emergencies and issues of their timely referrals. This was also observed in another local study by Khan A R et al,12 who found that among various reasons, inability of the primary care physician to diagnose an ischaemic limb and to timely refer to a vascular surgeon was the leading cause of delayed presentation to a vascular surgeon and resultant limb loss. General surgeons and emergency physicians are often the first or the only contact for patients in case of trauma and vascular emergencies so this requires devising a protocol for non-vascular surgeons working in peripheries. Imparting knowledge and skills of managing peripheral vascular injuries to non-vascular surgeons can fill the "expertise gap". Conveying basic limb saving maneuvers of vessel handling, getting proximal and distal vessel control, performing embolectomy and fasciotomy can make a lot of difference in managing these patients. Literature suggests different strategies including simulation for teaching surgical skills however, cadaveric based workshops are considered to be the most beneficial method of teaching anatomy and improving operative skills.13 Using this mode of refining skills has been one of the strength of this course. Short and focused discussions and skill sessions on such workshop platforms bridge the gap of lack of formal training and management of such emergencies during the training period of the participants.14 This was also evident from our study where there was an improvement in the knowledge and self-perceived satisfaction with the improvement in operative skills as a result of the course. It is needed that more of these workshops are organized on regular basis. One of the best things about this workshop was that it was attended by surgeons and trainees of variable ages as shown in the results and from different sub-specialties. We propose arranging such workshops in collaboration with other developed vascular centers in the country and also with the College of Physicians and Surgeons (CPSP) in different cities and in peripheries and thrive for better outcomes in patients with vascular emergencies. There are a few limitations to our study. The efficiency of the workshop in improving the knowledge and skills was gauged using written pre and posttest and participant satisfaction respectively, the improvement in post-test scores is a reflection of the immediate learning only and measures the participants' ability to retain and recall the facts learnt during the course. Similarly use of satisfaction index is although the most commonly used method, yet, is only considered to be a level 1 evaluation15 of any continuing medical education (CME) activity as it does not indicate any change or improvement in practice and patient outcomes.