Electro-encephalogram as predictor of eclampsia

Objectives: To assess the efficacy of using electroencephalographic changes for predicting eclampsia.
Method: The observational case-control study was conducted in the Obstetrics Department of Al-Yarmouk Teaching Hospital, Baghdad, Iraq, from April 1, 2016, to April 1, 2018, and comprised women with singleton pregnancy who had 24-40 weeks of gestation. They were divided into two groups as preeclamptic cases and normotensive controls. The groups were compared regarding electroencephalographic changes and the development of eclampsia in those with abnormal changes. Data was analysed using EVEIWS 9.
Results: Of the 100 subjects, 50(50%) were in each of the two groups. There was no significant difference between the groups in terms of demographic and clinical data (p>0.05) except blood pressure (p<0.05). Among the patients, 31(62%) had electroencephalographic abnormalities, while among the controls 3(6%) showed abnormal waves (p<0.001)..Focal sharp and intermittent slow waves were the commonest abnormal waves detected but the percentages of these waves between the groups were statistically not significant (p>0.05).
Conclusion: Women with preeclampsia were found to have electroencephalographic abnormalities which might predict an eclamptic fit.
Keywords: Electroencephalograph, Eclampsia, Hypertension. (JPMA 69: S-64 (Suppl. 3); 2019)

Hypertension (HTN) is one of the commonest medical diseases complicating pregnancy worldwide and is an essential cause of morbidity and mortality for both the mother and the foetus. It occurs in up to 15% of women during pregnancy and represents about 25% of hospital admissions.1 Pre-eclampsia and eclampsia are the most critical types of hypertensive disorders in pregnancy 1,2 which range from gestational HTN which complicates pregnancy after 20 weeks of gestation with no proteinuria 3 to pre-eclampsia which is associated with proteinuria which is a serious medical condition of pregnancy with a frequency of approximately 6-8% of pregnancies in the developed countries. 4 It is best described as a pregnancy-specific syndrome that can affect virtually every organ system. 2 The interaction of genetic, placental, immune, vascular and environmental factors is between the theories for the pathogenesis of pre-eclampsia 4-7 which leads to the activation of the maternal immune and cardiovascular systems and the development of the clinical syndrome. 4 Neurological complications are the major cause of maternal death in hypertensive women. 8 Pathological changes in pre-eclampsia are similar to that of hypertensive encephalopathy, such as headache, visual changes, convulsion, focal signs and others. 9 Convulsions during the pregnancy, labour or peurperium in women with pre-eclampsia complicates about 5 of every 10,000 deliveries and they are the second potential manifestation after headache for eclampsia diagnosis. 6,10-12 Several neuroimaging techniques have been used for better evaluation of these conditions. Electroencephalogram (EEG) is a way to record brain waves and is widely used to detect brain activity and to assess many neurological diseases. 13 It is a sensitive method to detect brain dysfunction and EEG changes can be found before the clinical features of pre-eclampsia. 8 While awake, adults show both sides of the brain normally having similar electrical activities, no abnormal bursts and no slow waves on EEG recording. If there is abnormity in one side, both sides will record different electrical activity like sudden bursts (spikes) or sudden slowing of brain waves activity 13 which indicate cerebral irritation. About 15-35% of women with pre-eclampsia record slow wave activity on EEG, while it shows abnormality in all women with eclampsia, mostly of slow theta and delta waves and generalised intermittent epileptiform seizure activity which may persist for 3-6 months after seizure that indicates prolonged cortical insult. 14,15The current study was planned to compared the EEG changes in patients with pre-eclampsia and normotensive pregnant women to verify the possibility of including EEG in the prediction of eclamptic fits.

The observational case-control study was conducted from April 1, 2016, to April 1, 2018, in the intensive care unit (ICU) and outpatients department (OPD) of the Obstetrics Department of Al-Yarmouk Teaching Hospital, Baghdad, Iraq, which is a tertiary referral hospital receiving more than 3,400 pregnant women per year. After approval from the institutional ethics committee, singleton pregnant women were enrolled, and after obtaining consent from the subjects, they were divided into two groups as preeclamptic cases and normotensive controls. The sample size was calculated on the basis of previous similar studies. 8,9,11,12 Those included were aged 18-40 years, had singleton viable pregnancy with a diagnosis of pre-eclampsia and gestational age 24-40 weeks.  Those with any previous neurological or psychiatric disorder, diabetes mellitus, history of head trauma, stroke, early degenerative disease, mental disorders, coma, brain acute intoxication and the use of drugs that affected brain function were excluded. Each pregnant patient was assigned a serial identification number. Patients were evaluated on the basis of detailed history and examination, and those with high blood pressure (BP >140/90mmgh) were admitted for further assessment and follow-up. Diagnosis of pre-eclampsia was made according to the guidelines 3,4,6 along with clinical and medical findings recorded during the follow-up period. HTN was diagnosed when systolic blood pressure (SBP) of 140 mmHg and/or diastolic (DBP) of 90 mmHg or more were recorded at a minimum of 2 reading at least 6 hours apart after 20-week gestation, or a single reading of severe HTN>160/110mmHg associated with proteinuria of 0.3g or more in a 24-hour urine collection which equals to 1+ or greater on a urine dipstick test. Blood sample 5cc was collected by the standard venipuncture and was sent for complete blood count (CBC), clotting screen, liver and renal function tests and midstream urine examination for proteinuria. Foetal monitoring was also done by cardiotocography and ultrasound. Severe pre-eclampsia was diagnosed in cases with severe HTN, visual and neurological symptoms, upper abdominal pain, oliguria, eclampsia, abnormal liver and renal function tests, reduced platelet count, obvious foetal growth restriction and pulmonary oedema. One EEG record was obtained for each subject before hydralazine and magnesium sulphate treatment. The EEG was done under the supervision of neuromedicine specialist using proper equipment (SAM 25 FO). Those with abnormal EEG were followed as inpatients in the ICU for the development of eclampsia. Data was analysed using EVEIWS version 9. Categorical data was presented as frequencies and percentages, while continuous data was represented as means and standard deviations (SDs). Independent t-test was used to compare the mean of continuous data. Pearson's chi-square test was used for assessing the association between categorical data. P<0.05 was considered significant. 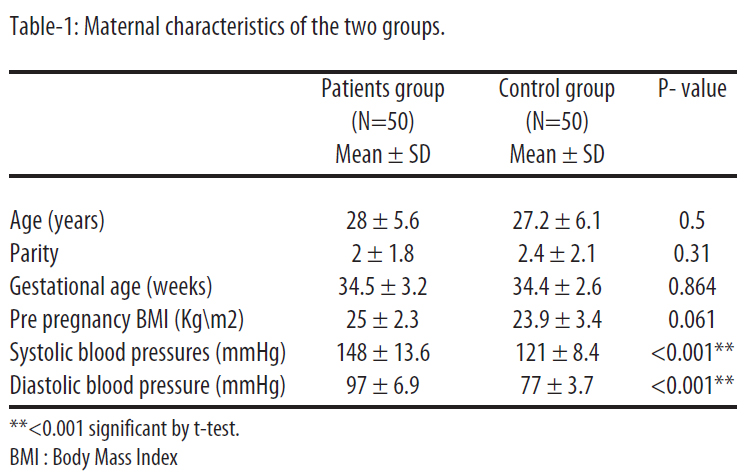 The aetiology of pre-eclampsia to date remains vague. It is a unique human pathology. Unfortunately, there is no perfect tool to evaluate and monitor brain dysfunction to avoid the neurological complications associated with preeclampsia. The availability of neuroimaging techniques, however, has revolutionised the early prediction of these changes. EEG is widely available and sensitive noninvasive way to monitor cerebral insult and neurological dysfunction. EEG changes might appear before the occurrence of any clinical sign and symptom and before irreversible brain dysfunction. 2,8 In the current study, 62% patients had abnormal EEG waves whereas in the control group only 6% showed abnormal waves and the results were statistically significant. This indicates that pregnant women with high BP were more likely to develop abnormal EEG waves and subsequent seizures. These findings matched with the results of a study which concluded that EEG abnormalities found in normotensive pregnant women were mild; and predominantly intermittent slow waves and occasionally focal sharp waves, while in pre-eclamptic patients the abnormal waves were seen more frequently. 8The current study revealed that in the control group, 94% and 6% showed normal and abnormal EEG reports respectively. These results can be explained by the fact that the EEG has low specificity so normal persons can be found with abnormal waves.8,14,16 The frequency of abnormal waves in both groups and in all the three categories were in line with earlier studies.13,15-17,20 Most of these studies concluded that the EEG abnormalities might be of clinical value in the assessment of pre-eclamptic women and might be regarded as a future predictor for the deterioration of brain function with subsequent susceptibility for eclampsia. 20 Thus a new technique might arrive and highlight the way forward for the researchers to discover more about what happens in this type of disorders and the utility of involving EEG in the evaluation of its severity. Further studies with larger sample size and longer duration are needed to support the findings of the current study. The use of EEG as a simple non-invasive technique in the clinical evaluation of women with preeclampsia to predict eclampsia is recmmended.

Pregnant women with pre-eclampsia were found to be more liable to have abnormal EEG waves with subsequent seizures. These changes were more in severely preeclamptic patients.