Objective: To assess the status of vitamin B12 in patients with type 2 diabetes, and to explore any association between its deficiency and diabetic peripheral neuropathy.
Methods: This cross-sectional observational study was conducted from August, 2017, to April, 2018, at the Specialized Centre for Endocrinology and Diabetes in Baghdad, Iraq. Type 2 diabetics using metformin were subjected to clinical examination for retinopathy using fundoscopy, and peripheral neuropathy using the Michigan Neuropathy Screening Instrument. Additionally, patients were asked to fill a questionnaire and their medical records were reviewed. Blood samples were obtained for the measurement of biomarkers. Vitamin B12 deficiency was recorded at ≤187 pg/ml. Data was analysed using SPSS 25.
Results: Of the 66 patients, 39(59%) were males and 27(41%) were females. The overall mean age was 53.3}9.2 years and the
mean duration of diabetes was 104}71.8 months. The mean dose of metformin was 1135}496 mg and
the duration of metformin use was 72}62 months. Overall, 19(29%) patients suffered from vitamin B12 deficiency. However, no significant difference was found between normal and deficit groups regarding the parameters that
may affect vitamin B12 level. Also, no significant correlations were found between vitamin B12 concentration and the dose (p=0.16) or the duration of metformin use (p=0.09).
Conclusions: High prevalence of vitamin B12 deficiency was observed in metformin-treated patients with type 2 diabetes. However, the deficiency had no correlation with the rate of peripheral neuropathy.
Keywords: Vitamin B12, Metformin, Type 2 diabetes. (JPMA 69: S-40 (Suppl. 3); 2019)

Type 2 diabetes mellitus (T2DM) is regarded as one of the most common non-communicable diseases all over the world. In 2015, the International Diabetes Federation (IDF) estimated that 415 million people worldwide had diabetes. The number of people with diabetes is expected to reach 642 million by 2040;an increase of 55%.1,2 Diabetic polyneuropathy is primarily a symmetrical sensory polyneuropathy, initially affecting the distal lower extremities. There is evidence of nerve damage at the time of diagnosis of diabetes in 10-18% of patients, suggesting that even pre-diabetes is associated with neuropathy.3 In the absence of contraindications, metformin is considered the first-line T2DM treatment according to the 2006 Consensus Statement from the American Diabetes Association (ADA) and the European Association for the Study of Diabetes (EASD). 4 Metformin is effective only in the presence of insulin, and its major effect is to decrease hepatic glucose synthesis, also called gluconeogenesis. 5,6 Vitamin B12 (cobalamin, Cb1) is a water-soluble vitamin principally obtained from animal proteins like meat and dairy products. 7 The usual Western diet contains 5-7mcg of Cb1per day, which is enough to maintain normal Cbl equilibrium. 8 For adults, the recommended dietary allowance (RDA) for Cbl is 2mcg/day. Vitamin B12 is required for deoxyribonucleic acid (DNA) synthesis, red blood cell (RBC) production, and neurological function. 9 Metformin reduces intestinal absorption of vitamin B12 in up to 30% patients, and lowers serum vitamin B12 concentrations in 5-10%, but only rarely causes megaloblastic anaemia. 10 Peripheral neuropathy may precede the development of megaloblastic anaemia in some patients with vitamin B12 deficiency. 11Studies describing the link between vitamin B12 deficiency and peripheral neuropathy in patients with T2DM are lacking and have produced conflicting results. 12,13 The current study was planned to determine the prevalence of vitamin B12 deficiency, and to ascertain whether this deficiency affects the incidence of peripheral neuropathy in T2DM patients.

Cross-sectional observational study was conducted from August, 2017, to April, 2018, at the Specialized Centre for Endocrinology and Diabetes in Baghdad, Iraq. After approval from the Iraqi Scientific Council of Internal Medicine, T2DM patients on metformin for >6 months were enrolled. Those excluded were patients with estimated glomerular filtration rate (eGFR) <60ml/min/1.73m2, intake of multivitamin or vitamin B12, acid-lowering agents such as proton pump inhibitors (PPIs) or H2 receptor antagonist, as well as alcoholics and pregnant women in addition to patients with comorbidities, such as liver disease, psoriasis, tumours and leukaemia, pernicious anaemia, human immunodeficiency virus (HIV), mal-absorptive conditions, like coeliac disease, inflammatory bowel disease, gastrointestinal surgery, including gastrectomy and gastric bypass surgery, and malnutrition owing to pure vegans, pancreatic insufficiency and anorexia nervosa. After verbal consent form the subjects, demographic and clinical data was recorded. This included age, gender, duration of diabetes, medication and smoking history, cardiovascular and renal co-morbidities and diabetic foot and eye surgery history. Anthropometric data were obtained by measuring height, weight, waist circumference (WC) andbody mass index (BMI). Thorough physical examination included measurements of blood pressure (BP) by standardised aneroid sphygmomanometer and fundoscopic eye examination (Keller ophthalmoscope) for retinopathy which was done by two researchers to confirm the findings. Peripheral neuropathy was diagnosed according to the Michigan Neuropathy Screening Instrument, 14 which is a tool for the diagnosis of diabetic neuropathy in outpatient clinics.15 The test looks for certain information and grade them on a point-based system 14,15 as follows: Do the feet show dry skin, callus, fissure, infection or deformities? The presence of any of these indicators of neuropathy is scored as 1 point and an additional point is added if an ulcer is present.

What is the vibration sense on the dorsum of the great toes? Reduced = 0.5 point; absent = 1 point.

What is the Achilles tendon reflex? Absent = 1 point; present with reinforcement = 0.5 points. 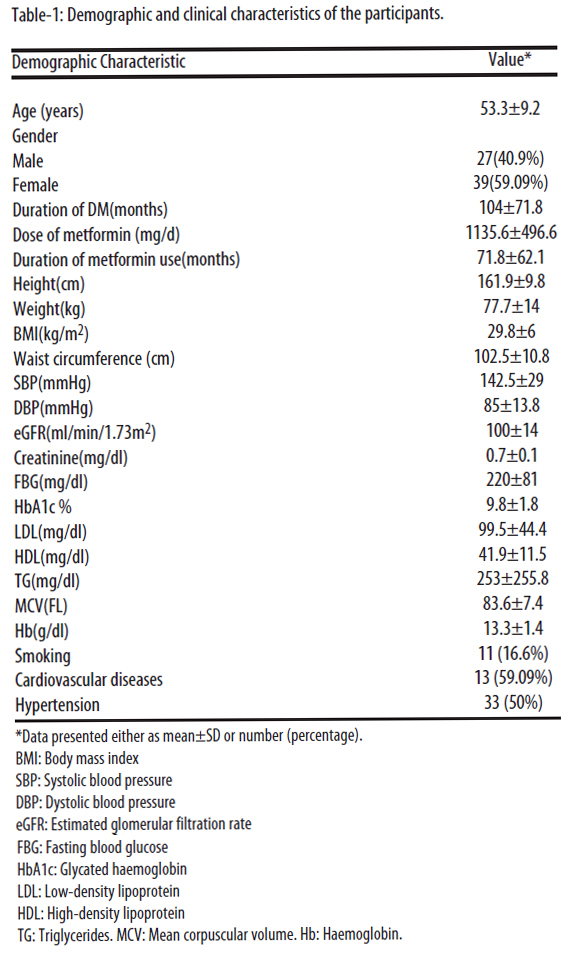 Cardiovascular diseases were reported in 13(17%) patients while 33(50%) were hypertensive. Peripheral neuropathy was detected in 30(46%) patients, and 7(11%) showed only signs of retinopathy. Mean vitamin B12 concentration was 318.3}184.3 pg/ml and 19(29%) patients had vitamin B12 deficiency, but there was no significant difference between normal and deficit groups regarding the parameters that may affect vitamin B12 level (Table-2). 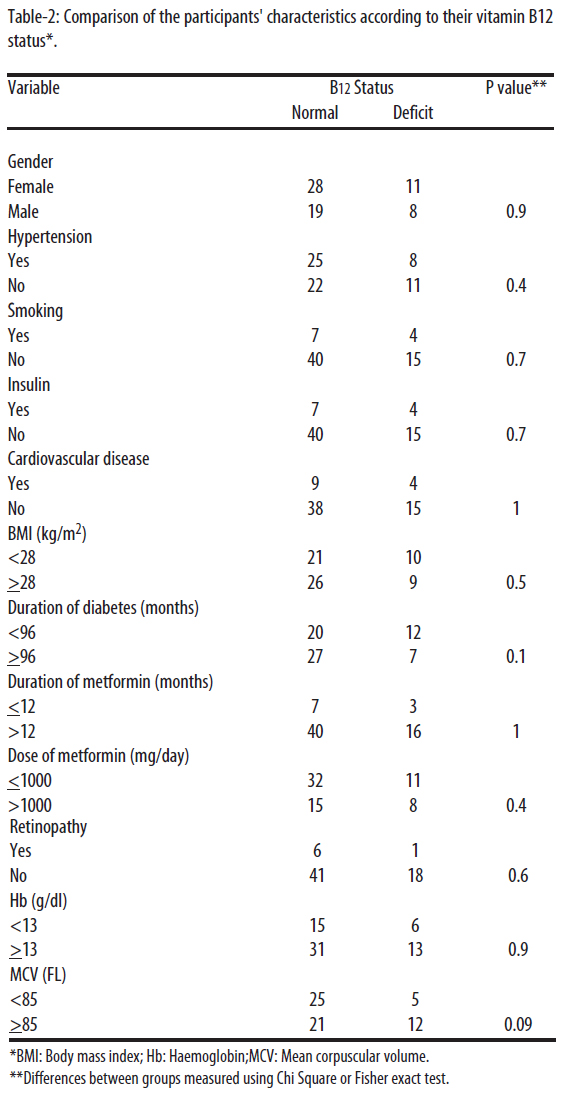 Metformin was found to be associated with vitamin B12 deficiency, but this deficiency had no correlation with peripheral neuropathy in T2DM patients.

Disclaimer: Nothing to Declare.
Conflict of Interest: Authors have no conflict of interest
Source of Funding: Ministry of Health, Iraq.