Objective: Chronic rhinosinusitis (CRS) is a popular and tiring disease with significant impacts on the economy and on the Health-related Quality of Life (HRQOL) of patients. This study aims to estimate the cost of illness (COI) and to assess the Health-related Quality of Life (HRQOL) in patients with CRS who underwent surgery in Vietnam and to analyse the relationship between socio-demographic characteristics and the COI as well as the HRQOL.
Methods: A cross-sectional study was conducted in Ear, Nose, Throat Hospital in Ho Chi Minh City (ENT Hospital HCMC), Vietnam between August and October 2018. The direct medical and non-medical costs, the indirect costs (productivity loss), and the HRQOL of patients with CRS were measured. A subjective assessment of quality of life (QOL) using EuroQol 5 Dimensions 5 Levels (EQ-5D-5L) was used to evaluate the health status of these patients after surgery. Characteristics related with the COI and the HRQOL were identified by multiple regression.
Results: A total of 264 inpatients with CRS participated in the study. The mean COI for inpatients with CRS was $812.83 and direct costs accounted for a major proportion (89.32%) of the total cost. In addition, the surgery represented the most significant direct medical cost with 58.57% of the total cost. Most of the patients reported no problems with mobility (89.1%), self-care (93.9%), usual activities (77.2%), and anxiety/depression (64.0%). The mean EQ-5D-5L utility score was 0.76 (SD = 0.17), and the mean Visual Analogue Scale (EQ-VAS) score was 76.57 (SD = 13.34). The results of multiple regression showed that gender, occupations, monthly income, prior surgery and family history of CRS affected the total cost while the HRQOL of patients were related to education, smoking behaviour, exercise behaviour and family history of CRS.
Conclusion: This study showed that although endoscopic sinus surgery (ESS) accounted for the largest expense in the COI, this surgical treatment helped to improve the HRQOL in patients with CRS. The findings provided a reference for policy makers in CRS management as well as for adjustment of costs for patients so as to reduce disease burden and to enhance their QOL.
Keywords: Chronic rhinosinusitis, Cost of illness, EQ-5D-5L, Health-related Quality of Life, Vietnam. (JPMA 69: S-10 (Suppl. 2); 2019)

Rhinosinusitis is considered one of the most prominent health concerns around the world. The European Position Paper on Rhinosinusitis and Nasal Polyps (EPOS) has defined rhinosinusitis (including nasal polyps) as an inflammation of the nose and the paranasal sinuses which was described by two main symptoms including nasal blockage and nasal discharge over 12 weeks. Chronic rhinosinusitis (CRS) is discriminated from acute rhinosinusitis (ARS) by the persistence of symptoms for at least 12 weeks, without resolution. CRS affects approximately 5% of the population around the world.1 In 1996, a National Health Interview Survey found that CRS influenced 12.5% of the United States (US) population, or 31 million patients, each year. 2,3 According to the result of a European postal survey, the general proportion of patients with CRS was 10.9% among 57,128 adults in 12 countries and ranged from 6.9% to 27.1% in 19 centres. 4 CRS is also known as one of the most popular upper airways diseases throughout Asia. Based on symptoms and positive endoscopic findings in two Korean nationwide surveys, the prevalence of CRS was estimated as 6.95%5 and 8.4%.6 According to the results of nasal endoscopy, CRS has beendivided into two types, CRS with nasal polyposis (CRSwNP) and without polyps (CRSsNP). 7 The most common causes that lead to CRS were allergic and nonallergic rhinitis and occasionally anatomic factors, such as a deviated nasal septum. 7,8Patients with CRS were treated by antibiotics, corticosteroids, and nasal saline irrigation in order to reduce the inflammation and to boost the clearance of the paranasal sinuses. Also, the most important therapy is the treatment of underlying   disease processes, such as environmental allergies. However, when this treatment is not effective for patients, finally endoscopy sinus surgery is required to improve the control of CRS symptoms and the quality of life (QOL). Symptoms of CRS have been determined to have negative effects on the quality of life of patients as well as on the cost of treatment. Several studies have calculated the overall direct cost of CRS, and a study in 2016 adjusted estimates appear to between $10 and 13 billion annually  in the US. 9 Meanwhile, the indirect cost of CRS is estimated to be over $20 billion per year. Even though not all patients with CRS need surgery, it is true that endoscopic sinus surgery (ESS) can bring numerous benefits to patients with refractory CRS. Therefore, it is essential to identify the cost of ESS to guide economic evaluations. The overall cost of ESS is different among countries worldwide. The cost of ESS in the Canadian healthcare system ($3,500 per case) is lower than half of the cost in the US ($8,00 per case). The results of studies in the Taiwan and India depicted that the overall procedural cost of ESS was $1,800, and $1,000 in 2014, respectively. 10 Numerous studies around the world have analyzed the effects of this disease on the social economy. In 1999, Rayet al. used the 1987 Medical Expenditure Panel Survey (MEPS) database to analyse the direct costs of sinus disease. They suggested that the financial burden of sinus disease was nearly $5.6 billion per year. 11 In 2007, Bhattacharyya identify the incremental health care use and expense associated with CRS in the US by MEPS. 12 The study performed a dramatic increase in the expense for the health care of CRS patients from 1996 by approximately $8.6 billion per year. According to a recent systematic review that evaluated the available literature about the COI of CRS, Smith et al. (2015) concluded thatthe overall cost of CRS was $22 billion in US society. 10 QOL is increasingly used to evaluate treatment effectiveness. The World Health Organization (WHO) has provided a definition of the QOL as a perception ofindividuals about their position in the background of the culture and the tradition in which they live. Moreover, it incorporates the physical state, mental condition, level of independence, social relationships, personal beliefs of a person, as well as the relationship between humans and the environment in a complicated way. EuroQol 5 Dimensions 5 Levels (EQ-5D-5L) has been widely used toassess the Health-related Quality of Life (HRQOL) of CRS patients. This questionnaire describes the health status of respondents on five dimensions, including mobility, selfcare, usual activities, pain/discomfort, and anxiety/depression, and there are five levels of response: no problem, slight problems, moderate problems, severe problems, and extreme problems. Additionally, a visual analogue scale (EQ-VAS) is another part of EQ-5D-5L, which can be used by patients to evaluate their health themselves by using a range of score between 0 (the worst health you can imagine) and 100 (the best health you can imagine). Results from the questionnaire not only analyse the patients' HRQOL but also translate into health utility scores. A study by Remenschneider et al. (2014) described the role and applicability of the EQ-5D-5L questionnaire for the assessment of the general HRQOL in patients with CRS. 13 Furthermore, in order to determine the different impacts of CRS symptoms on the general QOL in patients, a study in the US (2015) used responses to three questionnaires, including the Sino-nasal Outcome Test (SNOT -22), the EQ-5D, and the EQ-5D- VAS. 14 The purpose of this study was two-fold. Firstly, we analyzed the economic impact of surgical treatment on patients with CRS in Ear, Nose, Throat Hospital in Ho Chi Minh City (ENT Hospital HCMC), Vietnam, by estimating the cost of illness. Secondly, we evaluated the QOL of these patients using the EQ-5D-5L questionnaire. By defining accurate costs, physicians may enhance the value of treatment by appropriately utilizing health care resources for the correct patient within an optimal time. In addition, the outcome of this study can inform patients before they consent to an operation.

Data were collected in coded form from the questionnaire and entered into Microsoft Excel 2016 for WindowsR. Subsequently, data was cleaned and imported to SPSSR (Statistical Package for the Social Sciences) 20.0 software for analysis. For the socio-demographic characteristics such as age groups, gender, and living area, categorical variables were statistic summarized by valid frequencies and percentages. All costs were measured in terms of the Vietnamese currency (dong [d]) and were presented in US dollars ($) by using the August 2018 exchange rate of $1 = 23,200 d.19 We estimated direct medical costs direct non-medical costs, and indirect costs, according to each patient's medical diagnosis before admission, at hospitalization and after discharge. For QOL assessments, we obtained EQ-5D-5L profiles according to age groups, and calculated utility scores and VAS scores based on all of the characteristics. The EQ-5D-5L profile was described as the frequency and the percentage of patients reporting no problem and problem in each domain. Five levels of health status in each domain of the EQ-5D-5L questionnaire along a Likert scale converting into categorical values (problems vs. no problems) has been illustrated in previous studies.20,21 Due to the normal distribution of utility scores and VAS scores, the differences between average scores in each characteristic were tested by using t-test (for gender, living area, marital status, prior surgery, exercise behavior, and family history of CRS) and Analysis of Variance (ANOVA one way) (for age groups, education, occupations, monthly income, and smoking behavior). Furthermore, we used multiple regression analysis to explore relationships between characteristics and the total costs as well as the HRQOL. It is considered to show a statistical significance if a Pvalue is less than 0.05.

Table-1 shows the social-demographic characteristics of inpatients with CRS at ENT Hospital HCMC. 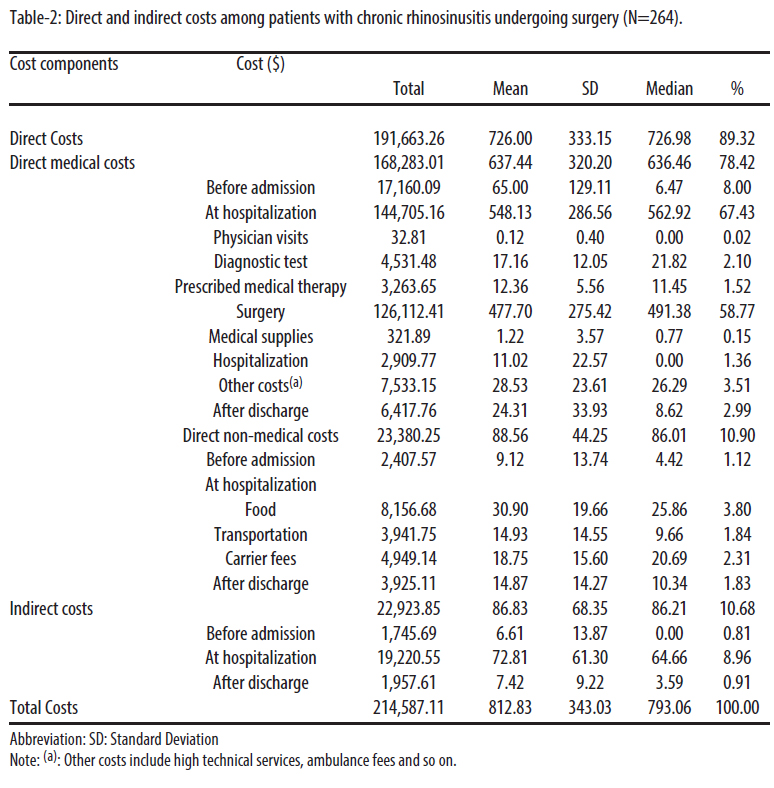 Table-2 presents the amounts of the direct and indirect costs among patients with CRS undergoing surgery at ENT Hospital HCMC.

Table-3 illustrates the cost of illness (COI) per patient and the proportion of direct costs of CRS by socialdemographic characteristics. 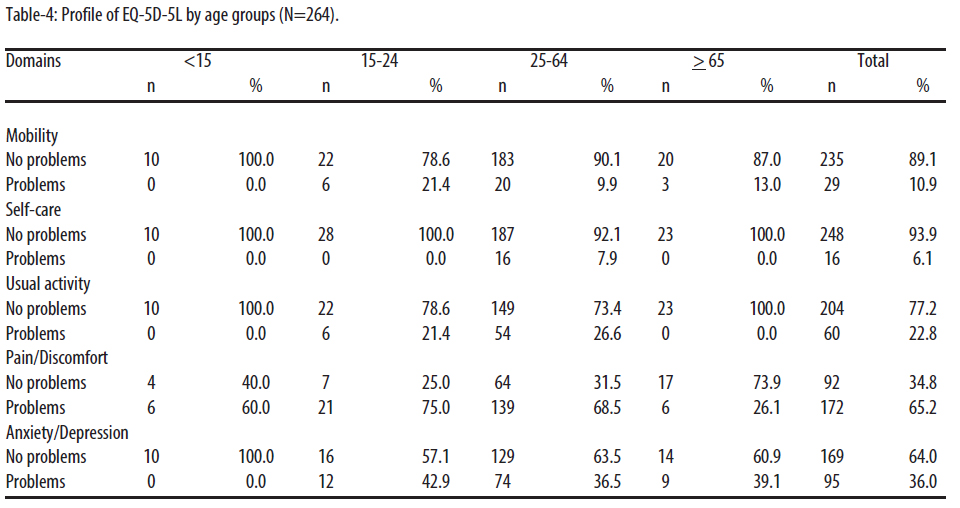 Table-4 shows the frequencies of reported problems for each domain by age groups. 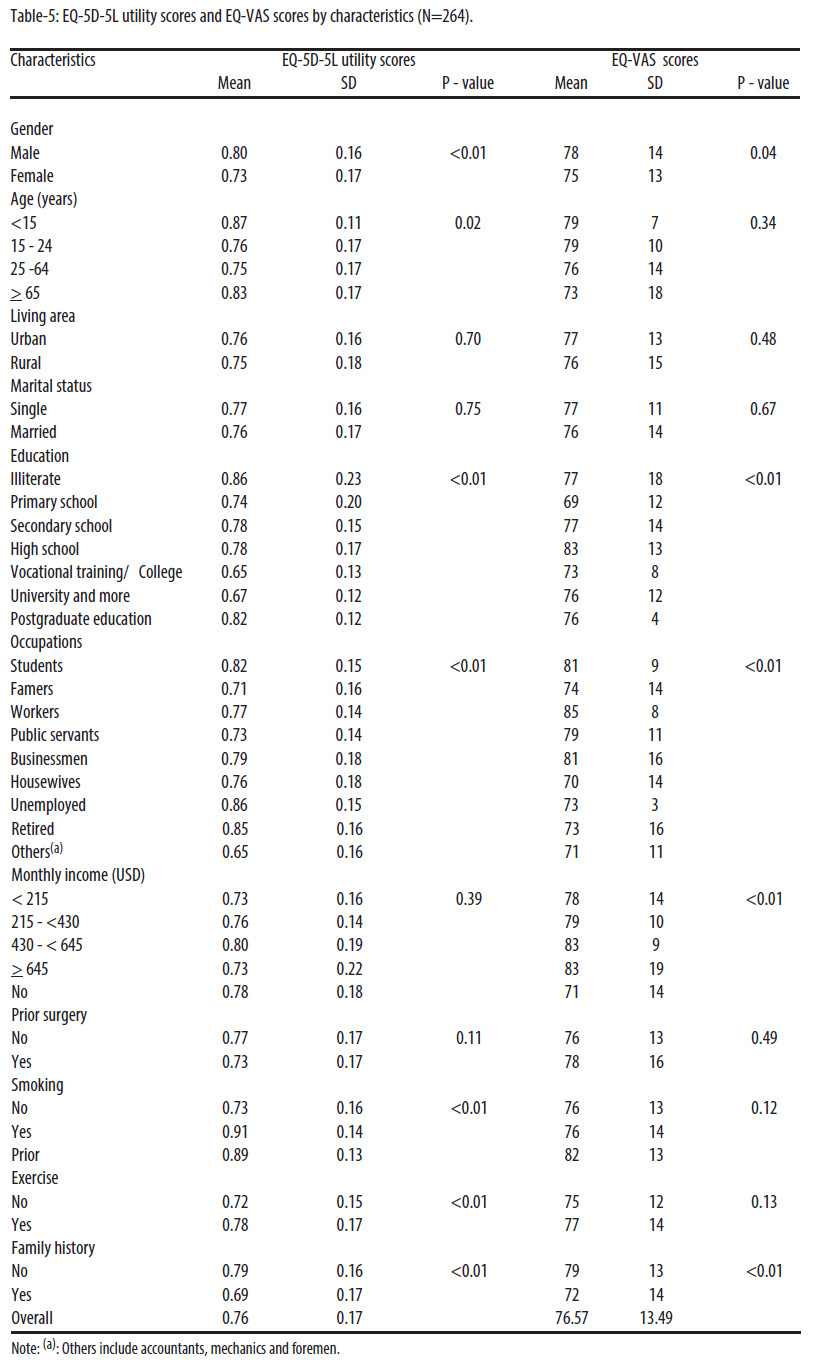 Table-5 summarizes the mean EQ-5D utility scores and VAS scores by the different characteristics of patients. 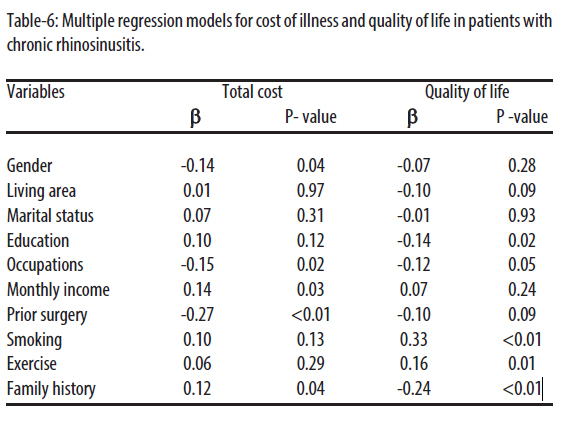 Table-6 depicts the results of multiple regression on the factors related to the cost of treatment and the HRQOL of patients with CRS at ENT Hospital HCMC.

Our study presents information about the burden of disease in patients with CRS and their HRQOL after ESS at ENT Hospital HCMC, Vietnam. Investigation of the COI showed that surgical treatment was the largest expense. Moreover, this present study confirms previous findings and contributes additional evidences that suggest ESS can enhance the HRQOL of patients with CRS. Because chronic patients incur many kinds of cost in healthcare systems, the definition of the long-term cost of treatment for patients with CRS should be considered in future researches. Also, this may possibly identify patients who are at high risk of incurring high costs in the future. Policymakers need to understand and should notice the design, the implementation, and the evaluation of support programmes for patients with CRS and for their families, especially in the field of financial evaluation of treatments. This solution is not only to reduce the burden of disease but also to improve the HRQOL of patients.

Acknowledgment: The authors would like to acknowledge the ENT Hospital HCMC and University of Medicine and Pharmacy at Ho Chi Minh for protocol approval prior to conducting this study. They also acknowledge the contribution of the interviewers and the patients who voluntarily participated in the study. They express their gratitude to all staff at Professional Healthcare Management, Education and Research Center (ProHES) for their support.
Disclaimer: None to declare.
Conflict of Interest: None to declare.
Funding Disclosure: None to declare.

The economic impact of asthma treatment on patients, 2014-2017: The Vietnamese experience from a public hospital

Non-surgical chronic rhinosinusitis and quality of life: A Vietnamese perspective

Economic burden of eczema in a middle-income country: A public hospital-based retrospective study in 2016-2017 in Vietnam