Tranexamic acid is emerging as a useful option for a number of clinical indications, by virtue of its anti-fibrinolytic properties that allow better haemostasis and lesser blood loss. Herein, the authors have attempted to summarize the existing evidence on the possible role of tranexamic acid in brain tumour surgeries.

Resection of brain tumours can be encountered with significant haemorrhage that may affect complete resection and puts the patient at risk. This is especially true for certain highly vascular tumours such as a significant proportion of meningiomas, haemangiopericytomas and haemangioblastomas. With the advent of stereotactic technology, the risk of intraparenchymal haemorrhage following needle biopsy is also of concern especially in deep seated areas like the brainstem.1,2 Anaemia and poor haemostasis are both in themselves associated with poor outcomes in neurosurgery. The general practice in surgical neuro-oncology is to optimize a patient’s haemostatic profile prior to surgery and have blood available for transfusion if the need arises. In Pakistan, this raises a financial problem of cross matching blood that will never be used, a financial burden for the majority of the population. Transfusion of blood also comes with its attendant risks.3,4 Current practice does not include prophylactic use of a pharmaceutical means to reduce blood loss. In this review, we examine the data on the use of tranexamic acid (TXA) in patients undergoing brain tumour resection in terms of volume of blood loss and any effect on outcomes.

Tranexamic acid (TXA) is an anti-fibrinolytic that enjoys wide acceptance as a safe and effective means of preventing excessive blood loss in both elective and emergency surgery. Its use has demonstrable effects in reducing blood loss and improvement of outcomes. CRASH II, a randomized controlled trial and economic evaluation of the effects of TXA on death, vascular occlusive events and transfusion requirement in bleeding trauma patients, showed that early administration of TXA reduced the risk of death in bleeding trauma patients. However, there was always a question of the risk of intravascular thrombotic complications and seizures due to GABA antagonism from the administration of TXA in patients with head injury or those undergoing neurosurgical interventions, which can be devastating.5 CRASH III, that looked at the effects of TXA on death, disability, vascular occlusive events and other morbidities in patients with acute traumatic brain injury, showed that this risk was no different from placebo and remained incredibly low.6

Vlu et al., published a case control study on the back of the CRASH II data, which examined the effect of TXA on haemostasis in patients undergoing brain tumour removal by measuring APPT, PT index, TT, fibrinogen, ATIII activity, factor XII-derived fibrinolysis, spontaneous euglobulin lysis at four points in time after the induction of anaesthesia, before Tranexam injection, 30 minutes after Tranexam injection, on the next day after the surgery. Blood from jugular and peripheral veins was analyzed simultaneously. According to their data, which was not publicly available at the time of writing this review, TXA caused a significant decrease in fibrinolytic activity and decreased duration of time required to achieve haemostasis and visual inspection of bleeding from the wound. We believe their study design can be improved, although they did report a decrease in wound drain output.7 Beynon et al., have published an interesting case report of a patient with coagulopathy with uncertain pathology who needed a stereotactic brainstem biopsy. The authors were able to perform it safely by administering TXA and desmopressin without a verifiable diagnosis for her coagulopathy.2 A 2011 report by Bharat et al., states that TXA does not have widespread use in neurosurgery, but they found it useful in an anecdotal report in which TXA administration arrested severe continuous haemorrhage in a child with choroid plexus papilloma. 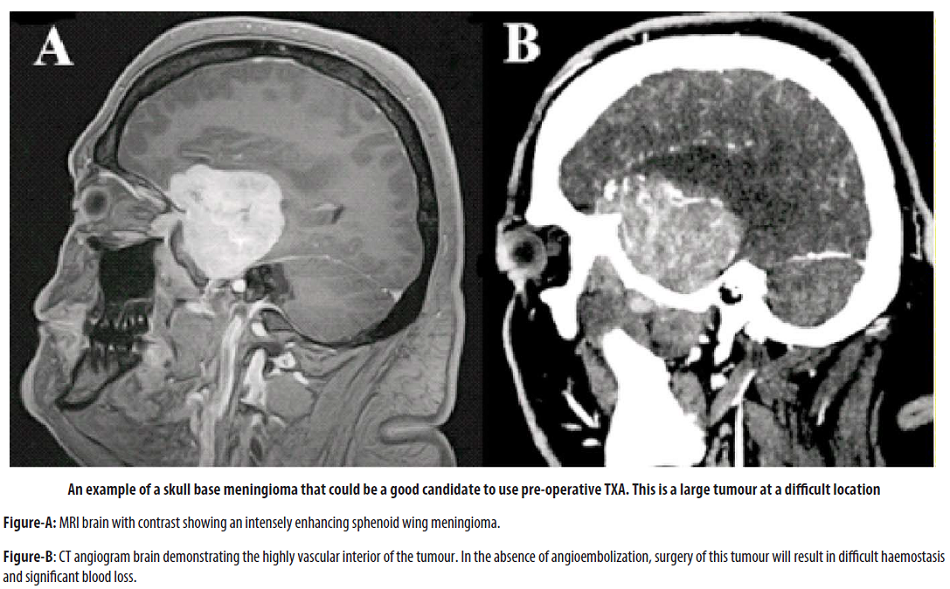 This was preceded by maximum standard efforts to secure haemostasis.8 Phi et al., have described two cases of infants who underwent surgery to remove a similar tumour (choroid plexus papilloma) and in their experience, TXA administration was associated with blood loss that was less than 20% of the child’s total circulating blood volume. When compared to another similar case in which TXA was not used blood loss was more than 100% of the total circulating blood volume.9

The most useful evidence for the use of TXA in brain tumour surgery comes from its use in meningioma and complex skull base surgery. Mebel et al., performed a retrospective cohort study to compare the rate of perioperative transfusion between patients who did and did not receive TXA during resection of complex skull base tumours. The majority of these tumours were acoustic neuromas and meningiomas. They concluded that routine use of TXA reduces the risk of perioperative transfusion in this group of patients and is an independent determinant (adjusted OR 0.15–0.65            [p value = 0.002]).10 Hooda et al., published the first RCT for the use of TXA in intracranial meningioma surgery. They concluded that there was a 27% reduction in estimated blood loss with the use of TXA (p <0.05). However, the risk of requiring a blood transfusion was not significantly lower in the TXA group despite a lower trend (p = 0.07). The number of patients who received a transfusion was similar in both groups.11 Nilsson et al., studied the coagulation changes that occur perioperatively in 40 patients undergoing neurosurgery with hydroxyethylstarch (HES) as fluid therapy. Their findings of mostly unaltered coagulation profile do not support the routine use of TXA in patients undergoing elective neurosurgery.12

We believe there is good evidence to suggest that TXA may be used prophylactically in intracranial meningioma surgery to reduce absolute blood loss but the risk of transfusion may not be significantly reduced. In paediatric highly vascular tumours such as choroid plexus papilloma,its use may be warranted considering the favourable side effect profile although the notion is based entirely on anecdotal reports.