Polio to the rescue; New frontiers in glioblastoma treatment

The year is 2005 and Temozolomide becomes the first major breakthrough to be allowed FDA approval for glioblastoma treatment with significant improvement in survival in the preceding two decades. This treatment saw an improvement in overall survival from a median of 6.9 months in 1995-96 to 10.3 months in those diagnosed between 2010-15 with 2-year survival peaking to 18%.1Several known and newly discovered chemotherapyagents have been tested with marginal or no improvement in overall survival.2Amajor field in glioblastoma research is immunomodulation. Amongst the many methods currently under review, using a pathogenic virus to stimulate the immune response into killing tumour cells holds significant promise.

The idea is neither new nor unique and is derived from fairly well established historical evidence of spontaneous tumour regression following immunization or incidental viral infection. For directed therapy, these viruses must infect only the target of interest, must not damage normal cells and be phased out of the host once its job is done.3Such a combination is hardly found in nature.Scientiststherefore, have turned to genetic engineering for the task. Such viruses are known as oncolytic and the neurotropic poliovirus was considered for this purpose in the 1990s. The prototype oncolyticpoliovirus, termed PVS-RIPO, is the live attenuated poliovirus type 1 (Sabin) containing a heterologous IRES (internal ribosome entry site) derived of human rhinovirus type 2 (HRV2).4This chimera is capable of entering and lysing tumour cells but cannot infect or replicate in normal cells that are capable of triggering an immune response, which tumour cells cannot. Genetic stability was ensured following serial transmission through HeLa cell lines, which are one of the oldest and most commonly used cell lines.5Preliminary studies in animals showed the virus to be effective in eliminating neuroblastoma and glioblastomasin mice to certain success. In these early studies, tumourinoculum would be placed in mice and allowed to grow followed by intra-tumoural injection of PVSRIPO.6,7 Theresults were very promising and shortly trials using humansubjects were initiated by Gromeier and colleagues at Duke University. In a landmark paper published in 2018, they described phase II trials involving a direct intratumouralinoculation of PVS-RIPO. The study lasted from May 2012 to May 2017 and involved 61 patients with recurrent glioblastoma. These patients were consecutively chosen after a single recurrence of glioblastoma with a KPS of no less than 70, a contrast enhancing tumourvolume greater than 1 cm3 and less than 5.5 cm3. A single stereotactic biopsy was taken prior to placement of catheter to deliver PVS-RIPO into the tumour for geneticanalysis and confirmation. Inoculum volumes (3.25 ml) were administered with a pump and imaging was acquired 4 hours after administration and thereafter at regular intervals.8 Results of the trial were promising with overall survival plateauing at 21% at 24 months in the PVS-RIPO group while overall survival continued to decline in the historical group. This was favourable to outcomes following treatment with Nova-TTF.9 This study also showed patients to have a durable radiographic response following infusion with tumour volumes diminishing over time. Further work is required to determine which genetic variant of glioblastoma is most amenable to this treatment as new data comes to light regarding the molecular and genetic heterogeneity of this elusive and fatal disease.10

Based on current evidence, we strongly believe that oncolytic virus therapy has an evolving role in glioblastomamanagement. Current evidence points towards its likely benefit in significantly improving survival in recurrentdisease but it may also have a role to play in newlydiagnosed glioblastoma as a means of either primary therapy of volume reduction prior to surgery in order to convert unresectable disease into one that is amenable to surgery. 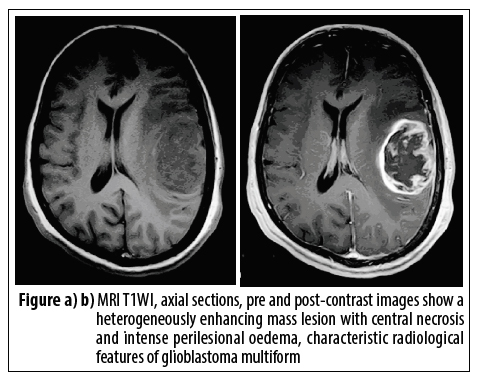