Objective:To compare the effectiveness of dual task specific training and conventional physical therapy in ambulation of patients with chronic stroke.

Methods:The randomised controlled trial was conducted at the Habib Physiotherapy Complex, Peshawar, Pakistan, from January to August 2017, and comprised patients with chronic stroke. The patients were randomly assigned to two treatment groups. Group A received dual task training, while Group B received conventional physiotherapy. Dual task training included activities such as slowlywalking backward, sideways, and forward on a smooth surface while holding a 100gm sandbag. The conventional physiotherapy included mat activities, stretching and strengthening exercises and gait training. Pre-test and post-test data was taken for both spatial and temporal variables for both groups using Time Up and Go Test and 10-meter walk test. Step length, stride length, cycle time and cadence were also calculated before and after treatment. SPSS 23 was used to analyse the data.

Cerebrovascular accident (CVA) is the leading cause ofmorbidity and mortality (16.5%) and is associated with incredible healthcare costs worldwide.1An estimated $27 billion is the annual economic costs of stroke in 27 European countries in which the direct cost is $18.8 billion and indirect cost is $8.5 billion due to its high prevalence, chronic characteristics and range of therapeutic interventions.2 Of all the strokes, 15% are haemorrhagic and 85% are ischaemic.3 The incidence of stroke decreased approximately by 19% in the United Kingdom.4The incidence of CVA is higher in south Asian, black, Chinese and Japanese populations compared to the Caucasians.5The mortality of stroke is higher in low and middle income countries (LMICs) and in the developing countries.6Females have a higher CVA risk compared to the males.7The occurrence of recurrent stroke or transient ischaemic stroke among stroke survivors is 30%.8There will be an increase by 50% in CVA incidents because of the increased average population age and improved quality of life.9A study showed that 24% stroke survivors feel severe and 33% moderate fatigue after stroke.10Also, 40% survivors are left with functional limitations and 15-30% become handicapped, resulting in motor, sensory and cognitive functions which are the major components of functional independence.11 Among physical function, gait is mostly affected by stroke, walking speed and duration go shorter, affecting activities of daily living (ADL), leaving stroke patients unable to perform simultaneous tasks.12Physical therapy treatment helps in improving functionof the affected upper and lower limbs in stroke patients.13There are different physiotherapy treatment techniques available for the rehabilitation of stroke patients, but highqualityrandomized controlled trials (RCTs)have supportedthe effectiveness of dual task training (DTT ) in the rehabilitation of stroke patients.14This technique involves performing a task while doing another task, or, more simply, executing two tasks at the same time. It consists of a basic motor task and an additional motor task which is examined by changes in gait performance.14A study conducted by Salbach et al. concluded that walking distance and gait speed of stroke patients increased after performing DTT.15Another study revealed significant improvement in walking abilities after 4 weeks of DTT in stroke patients.16 A study by Kim H. et al. concluded that DTT is effective in improving walking ability of stroke patients.17 Conventional physiotherapy (CPT), including mat activities, stretching and strengthening exercises, gait training and balance training, is also reported to be effective treatment for the rehabilitation of stork patients.11,13There is a need to find the comparative effect of the two treatment techniques for subjects with chronic stroke. The current study was planned to compare the effectiveness of DTT and CPT in ambulation of patients with chronic stroke.

The RCT was conducted at the Habib Physiotherapy Complex, Peshawar, Pakistan, from January to August 2017. After approval from the ethics committee of Khyber Medical University, Peshawar, the sample size was calculated using online calculator18to achieve 80% powerwith alpha value of 95% representing an equal exposedto- unexposed population ratio. Using consecutive sample technique, male and female hemiplegic stroke patients aged 40-65 years who weremedically stable and had completed their initial medicaltreatment were included. Stroke patients with medical or physical complications, such as pressure ulcers or contractures etc., were excluded. Also excluded were those who were unable to follow commands and instructions and those having visual deficit, aphasia, transient ischaemic attack (TIA) or having gait problem due to lower limb pathologies such as fracture etc. Envelopes containing information sheets and data collection tools were equally numbered with half labeled as Group A and the other half as Group B. These labeled papers, folded in such a manner that the labelling was not visible, were placed in a container, and the patients who fulfilled the eligibility criteria and consented to participate were requested to pick one envelope for as signing them to either of the two groups. Baseline readings were taken for time up and go (TUG) test and 10-meter walk test (10MWT).Step length, stride length, cycle time and cadence were also calculated before and after the treatment. Group A, the experimental group, was exposed to DTT for 40 minutes 4 times per week for 4 weeks. Activities included slowly walking backward, sideways, and forward on a smooth surface while holding a 100g sandbag, and picking up plastic cups that lay in front of the feet while rising from a chair. CGroup B, the control group, was exposed to CPTfor 40 minutes4 times per week for 4 weeks. Activities included stretching and strengthening exercises and gait training. Data was analysed using SPSS23.Dependent variables were cadence, step length, stride length, gait cycle, TUG test, and 10MWT.DTT and CPT were independent variables. For comparison of demographic information and intergroupvalues, independent sample t-test was used. Pairedsample t-test was used to analyse the pre- and postintervention scores of the dependent variables within the groups. P<0.05 was considered significant . 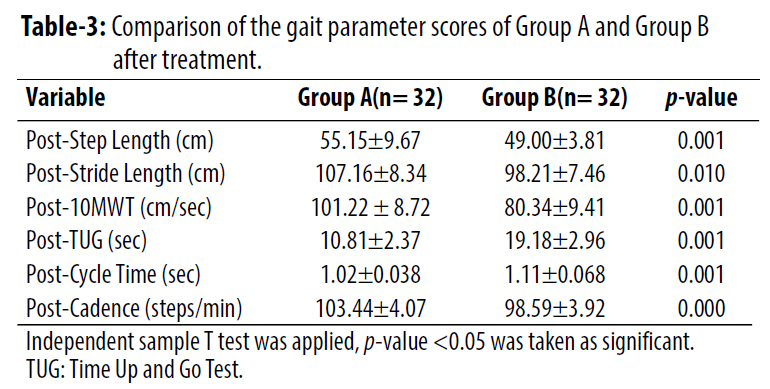 Results showed that under DTT, the gait speed was significantly improved in the current study which is supported by a study on chronic stroke patients where the objective was to improve walking ability by DTT. Literature suggests patients are able to safely and effectively ambulate in the community.19It has been reported to function as a perambulator in most social and environmental contexts a walking speed of 110 to 150 cms per second is considered to be enough.20Dean et al. reported a gain of 12.6 cm/s in the gait of stroke survivors after treatment in the experimental group, while in our study the gain in speed was 16 cm/s in Group A and wassignificantly superior.20 The mean age of patients was58.57±6.604 in the present study which is similar to those reported in earlier studies.21In the current study there was a gain in walking speed after treatment, as has been reported in studies.15The effects of DTT in improving walking ability of stroke patients reported in a controlled trial17are also similar to our findings. A study showed there was a significant difference in stroke patients for all gait parameters between the groups except for TUG test. In the current study, there was significant improvement for the same variable. This could be due to the treatment duration where the patients performed the training for 3 times a week in the experimental group, but in our study the patients performed the training for 4 times a week.22A study with 20 stroke patients concluded that after treatment of 4 weeks of 3 times a week, patients in the experimental group improved in terms of their TUG test.23This is similar to our findings. A quasi-experimental study on the effects of DTT on gait introduced activities for a period of 40 minutes 3 times a week for 4 weeks and reported significant improvement in gait parameters of cadence while there was no statistical significant improvement in terms of step length and stride length.24 This may be due to the small sample size and possibly because of treatment timing. In the current study the patients were doing exercise 4 times a week for 4 weeks. Only right hemiplegic patients were recruited for the study24 compared to the present study as there were both right and left hemiplegic patients. Another study reported results similar to those of the current study. There was a significant improvement in thespeed of Motor Dual Task group. Inter-group analysisshowed significant improvement in step length, stride length and cadence in the experimental group25which is similar to the findings of the present study. There was an increase of gait speed from 52 cm/s to 69 cm/s after 4 weeks of training in a study conducted on stroke patients where the change in speed was similar to the present study; 17 cm/s.26TUG test was significantly improved in the experimental group of an RCT,27and the results match our findings Large clinical trials and multicentre studies need to be conducted in order to determine effectiveness of DTT in comparison with other treatment options available for the rehabilitation of stroke patients. In terms of limitations, certain confounding variables, such as psychological status, use of medications, nutritional status and family support etc., may have affected the results of the current study, but it was beyond the scope of the work to control these confounding variables.

CPT and DTT effectively improved gait ability of chronic stroke patients, but patients who received DTT showed significant improvement in all spatial and temporal gait variables compared to CPT. Limitations: The RCT was not registered with any registration authority and, therefore, does not have a trial number.