Effect of Mulligan spinal mobilization with arm movement along with neurodynamics and manual traction in cervical radiculopathy patients: A randomized controlled trial

Cervical radiculopathy (CR) patients are more prone to disability than those who only have neck pain.1 It gives s ymptoms of nec k pain radiatin g to arm with paraesthesiae, numbness and weakness in the arm. 2,3It can be caused by disc herniation, degenerative and spondylotic changes which ultimately compress the cervical nerve roots. 4,5 The 12- month prevalence of CR is 85/100,000. 2 It affects both males and females, with the per-year prevalence of 107.3 for men and 63.5 for women per 10,000 population.2,6 Sensory or motor deficit in the arm is followed by the affected cervical nerve root in myotomal and dermatomal patterns. 7,8 Disc herniation is the most common reason in the entrapment of nerve normally in the younger patients aged 30-40 years, while as the age increases, the disc degeneration becomes the pea k cause in fifth and six th d ec ades of life.1 Literature has revealed that physiotherapy treatment of CR was mostly by mobilising the nerve, traction and mobilisation of cervicalvertebra. In vertebral mobilisation, Brian Mulligan suggested different mobilization techniqu es, like sustained n atural apophyseal glides (SNAGs) and natural apophyseal glides (NAGs), while, for extremity, mobilisation with movement (MWM) was suggested. These managements showed significant improvement in pain and disability in the experimental studies.9-12 A new concept of Mulligan for spinal origin symptoms radiating to the periphery included spinal mobilization with arm movement (SMWAM). In this technique, sustained transverse glide is maintained on the spinous process of the affected vertebral level towards the unaffected side while actively performing the limited peripheral joint movement. The mobilisation must be pain-free and sustained throughout the range of extremity movement. The principle behind this approach is when the movement in the shoulder joint occurs, the spinal movements also take place due to the attachment of muscles from the scapula, cervical and upper thoracic spine. It helps in generating myotomal movement as the patient is learning that limited movement. 13The current study was planned to see the effect of SMWAM along with neurodynamics and manual traction on pain, disability and cervical range of motion (ROM) in CR patients.

The randomised controlled trial (RCT ) was conducted from August to December 2017 at the Physical Therapy and Rehabilitation outpatient department (OPD) of the Railway General Hospital (RGH), Rawalpindi, Pakistan, after approval was granted by the institutional ethics committee and by the of Riphah College of Rehabilitation Sciences, Islamabad. The subjects were diagnosed on the basis of clinical prediction rule which comprises Spurling test, Distraction test, Upper limb tension test 1 and ipsilateral cervical rotation less than 60 degrees. Three out of these 4 elements confirm a CR diagnosis. Patients of either gender aged 20-60 years with pain and paraesthesia in the unilateral upper extremity and with limited cervical ROM were included, while patients with bilateral upper extremity symptoms, history of previous cervical or thoracic spine injury, recent fracture or surgery in and around the shoulder, any systemic disease and with unstable spine were excluded. Informed consent was taken from all the participants. Sample size was calculated using OpenEpi tool 14 with 95% confidence level. The subjects were randomly allocated using a lottery method into the two treatment groups A and B. Patients in both the groups were treated with conventional treatment, neurodynamics and manual traction, while SMWAM was given to only Group A. In conventional treatment, hot pack was applied for 10 minutes, active ranges of motion (AROMs) performed with 3 sets of 10 repetitions and isometrics for each movement was repeated 20 times with the hold of 6 to 10 seconds in each repetition. For neurodynamics, sliding technique was used with a set of 10 repetitions in each session. Manual traction was given for 10 minutes with a pull for 10 sec and rest was 5 sec. Mulligan SMWAM was given to only Group A patients by maintaining transverse glide with 10 repetitions in the first session increasing to 30 repetitions with the sets of 3 in further sessions. A structured questionnaire was used to collect data before and after the completion of 3-week treatment protocol with 2 sessions per week. Pain intensity was recorded by Numeric Pain Rating Scale (NPRS) and degree of disability was assessed by Neck Disability Index (NDI), whereas ROM limitation was measured by Universal Goniometer for both groups. Data was analysed using SPSS 21. Parametric test i-e. Independent T-test and paired sample T-test were applied on NDI and all the cervical ranges except right side bending, while nonparametric tests i-e. Wilcoxon signed rank test and Mann-Whitney test were applied on NPRS and cervical right side bending.

Within-the-group difference showed significant results (p<0.05), but when the groups were compared, Group A showed significantly better results in terms of pain, disability and cervical ROM (p<0.05 each) (Table 2).

With the reduction in pain and disability, SMWAM showed significant increase in cervical ROM compared to neurodynamics and manual traction alone (p<0.05) (Figure). 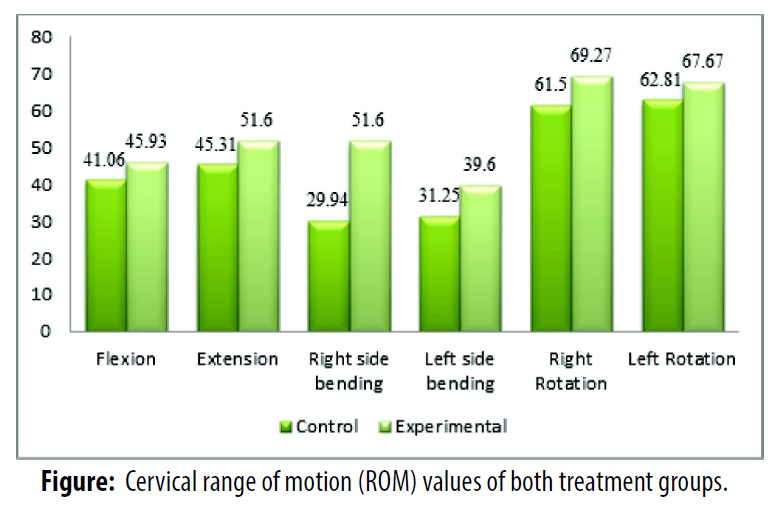 The current study was conducted to determine the effects of SMWAM along with neuro-mobilisation and manual traction on pain, disability and cervical ROM in CR patients. Both the groups showed significant improvement in pain and disability, but, when compared, the experimental group showed more improvement for pain (p<0.05) and decrease in disability (p<0.05). All the cervical ranges were also improved in the experimental group compared to the control group. Literature showed significant results for pain and disability using SMWAM. A study on 30 patients with mechanical neck pain to see the efficacy of SMWAM compared to supervised exercise programme, in which experimental group was treated with SMWAM and also by supervised exercise programme while the control group was managed by only supervised exercise programme, showed significant improvement in there outcomes which were neck pain, disability and cervical ROM, after a period of 2 weeks of 6 treatment sessions. 15 Similar results were measured in the current study with significant reduction in pain, disability and improvement in functional ability. The concept of SMWAM is to mobilise the spine above the entrapped nerve along with actively performing the movement affected by that nerve. This technique was also studied on the lower extremity with the name Spinal Mobilisation with Leg Movement (SMWLM) on 30 patients with lumbar radiculopathy. Conventional treatment was given to both groups while SMWLM was given to experimental group along with conventional treatment. After the completion of the study, the results showed significant improvement in pain and functional ability. 16 Another study, which was done to measure effect on grip strength and pain in patients with radiating arm pain, comprised 50 patients. Some were treated with SMWAM while others with only conventional treatment. Cross-analysis was done for pain and grip strength between the groups. It was concluded that patients treated with SMWAM had better managed pain and their grip strength was more effectively than those given the conventional treatment alone. 17 In terms of limitations, the current study was done at a single centre with a small sample size which was due to non-availability of CR patients. Besides, cervical ROM was measured by Goniometer as the Inclinometer was not available. And, finally, due to unavailability of a registration office for RCTs in Pakistan, the current trial could not obtain a Registration Number.

12. Anandkumar S. The effect of sustained natural apophyseal glide (SNAG) combined with neurodynamics in the management of a patient with cervical radiculopathy: a case report. Physiother Theory Pract 2015; 31: 140-5.