Objective: To determine the clinical outcome and mean length of hospital stay of paediatric patients with severe blunt traumatic head injury (THI) receiving 3% hypertonic saline (HTS) in the Emergency Department (ED).
Methodology: This case series study was conducted at the Department of Emergency Medicine, Aga Khan University Hospital, Karachi, from 2014 to 2015 via chart review of 105 patients. Detailed history and clinical examination of all paediatric patients aged 2-16 years was recorded which included moderate to severe head injury as classified by the Glasgow Coma Scale (GCS) by the Brain Trauma Foundation. As per routine care after admission of such a patient, for resuscitation 3% HTS was administered. GCS was recorded at 6 hours and at the time of discharge.
Results: Of the 105 patients, 76 (72.4%) were male and 29 (27.6%) were female, and the mean age was 61.6+45.9 months. Traumatic brain injury (TBI) was found moderate in 60 (57.1%) cases and severe in 45 (42.9%) of our patients as per the GCS. Six hours after resuscitation with 3% hypertonic saline, 45 (43%) patients normalised as per GCS, 39 (37%) patients had moderate TBI and 21 (20%) had severe TBI. Forty five patients had a hospital stay of 2-3 days. The GCS improved after resuscitation with 3% hypertonic saline in emergency department, with a mean length of stay of 4.6+3.9 and 12.6+10.7 days in moderate and severe head injury respectively with a P value of <0.001, and was normal in 94 (89.5%) patients at the time of discharge.
Conclusion: Paediatric patients with TBI receiving 3% hypertonic saline results in improved GCS and a decrease in the length of hospital stay.
Keywords: Hypertonic saline, Traumatic Brain Injury, Head Injury, Glasgow Coma Scale, Trauma (JPMA 69: 0000; 2019). doi: 10.5455/JPMA.296439.

Trauma is one of the major causes of morbidity and mortality around the world and by the year 2020, it will be considered the third largest cause of the global burden of disease.1 Despite recent advances in the field of trauma, TBI is still an area of concern for most researchers around the world, as is considered the major cause of morbidity and mortality in most developed and developing countries. 2  It is the leading cause of death in North America under age of 45 and stresses people financially. 3  In most literature, TBI is reported as a 'silent epidemic.' It is under reported in most developing countries and estimated to affect 435,000 children. Around one third of the deaths occurring between the ages of 1-14 years with an incidence of 679 cases per 100,000 children, projected to become 2700 deaths. 4,5  In developed countries 200 per 100,000 people admitted in the hospitals annually are at risk of TBI. TBI affects mostly the younger population as they are more exposed to the external environment, with a major concern of lifelong disability and a high impact on socioeconomic and public health. TBI related disability has been reported to be around 5.3 M in the USA with 7.7 M having neurocognitive deficits.6 Asian region also has a high incidence of road traffic accidents and self-inflicted injuries, making it one of the top ten causes of mortality. 7  India shares a significant rate of intracranial injury from road traffic accidents, falls and other injuries. While in Pakistan the incidence is 81 per 100,000 with 15% mortality rate.8,9 As a developing country, Pakistan has a mere presence of basic health needs, therefore TBI creates a significant burden on the physiological and economical aspects on the individual and the family. 10 In the past few decades there is an ongoing debate on the use of hypertonic saline (HTS) for reducing intracranial pressure (ICP) after TBI. The proposed beneficial effect of the HTS is mostly believed due to its property to reduce the elevated intracranial pressure by creating an osmotic gradient between the intracellular and intravascular space, thus decreasing the intracranial pressure caused by cerebral oedema or the space occupying haematoma. Therefore HTS has shown beneficial results however the data is still lacking. The use of HTS in lowering intracranial pressure was firstdone in 1919, and the effects were further investigated in animal testing showing similar results. The mechanism postulated to favour this is the creation of osmotic gradient that has been central in the aforementioned effect. The increased osmotic gradient that is created with the use of 3% hypertonic saline, causes the water to diffuse out passively across the blood brain barrier through the intravascular space and reducing it which results in the decrease of intravascular volume and eventually improving the cerebral blood flow. 11  While HTS proved to play a definitive role in the reduction of the ICP, Wakai et al further found hypertonic saline to be more effective in reducing the intracranial pressure as compared to mannitol. 12  However reliable data is still missing on the use of HTS, its association with the length of hospital stay and Glasgow coma scale (GCS). Recently 3% HTS has gained appreciation in the paediatric population, however no such study has been conducted in Pakistan on the use of 3% hypertonic saline in paediatric patients with traumatic brain injury. Hence our aim is to investigate clinical/GCS improvement in paediatric patients along with the mean length of hospital stay (LOS) who presented with moderate and severe traumatic head injury and were resuscitated with 3% HTS in the ED. Methods This case series has been conducted from 2014 to 2015 in the Emergency Department of Aga Khan University Hospital, a tertiary care level 1 trauma centre, after the approval from institutional review board. It was retrospective cross sectional study chart review, with nonprobability convenient sampling. The sample size was calculated from the study published in Anesthesia & Analgesia in 2006. 13 In patients who used HTS, the mean length of stay was 8 days with standard deviation of 2.8, with confidence level of (1- = 95%), standard deviation ( = 2.8) and margin of error (d=0.5) the calculated sample size of the study was 89. If we add 15% as non-response rate, the sample size of our study would be 102±3 (105). We included paediatric patients with blunt TBI of either gender between 1 to 16 years of age. Patients with moderate to severe traumatic brain injury diagnosed as per the operational definition were included in this study. All those patients were excluded from the study who had any pre-existing congenital or acquired central nervous system pathology, had polytrauma, more than 12 hours of TBI, patients who received any form of intravenous fluids like mannitol or dextrose from other hospitals, the ones who left against medical advice (LAMA), those who needed any neurosurgical intervention, and those who developed nosocomial infections (pneumonia, urinary tract infections and wound infections). All patients enrolled were managed as per the hospital standards and policy and were observed and categorized with moderate and/or severe brain trauma on the basis of the GCS as per the Brain Trauma Foundation. Demographic variables were determined and 3% hypertonic saline was started as routine care. Six hours after resuscitation, GCS was conducted and recorded again on the questionnaire. The patients who were admitted in the hospital were followed up and the Glasgow Coma Scale was also recorded on the day of discharge. Data was entered and analysed by using SPSS statistical package version 20. Mean and standard deviation were calculated for age groups, length of hospital stay and Glasgow Coma Scale (GCS) score. Frequency and percentages were calculated for age groups and gender. Stratification with respect to age, gender and GCS score was undertaken. Post stratification t-test was applied and p -value < or = 0 .05 was taken as signific ant. 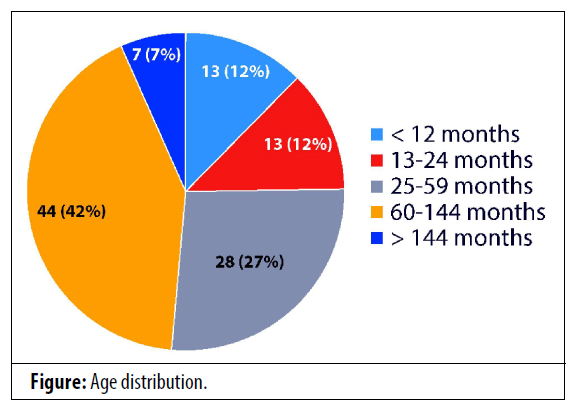 We concluded that resuscitation of patients after administering 3% hypertonic saline has good results in improving the Glasgow coma scale and decreasing the length of stay at the hospital. As our study was a case series there is a further need of a controlled trial to clarify the effects of resuscitation by hypertonic saline on patient outcome.

Disclaimer: Oral presentation at 33rd Conference, International Society for Quality in Health Care (ISQua), 2016 Tokyo, Japan.
Conflict of Interest: The authors reported no conflict of interest and no funding was received on this work.
Funding disclosure: None to declare