The adolescents represent a nutritionally vulnerable segment of population, as adolescence is a period of rapid physical and psychological growth. Increased nutrient requirements combined with the marginal nutrient intake place this group at a risk of various deficiency diseases.1 Among nutritional deficiencies, anaemia affects a large fraction of female population, particularly adolescents and pregnant women. 2 Anaemia is globally considered a serious public health issue which affects 1.62 billion people, including 25.5% of school-going adolescent girls worldwide. 3 In the developing countries, 27% adolescent girls are found to be anaemic compared to only 6% in the developed countries. 4 In Pakistan, 39% adolescent girls and 20% adolescent boys are anaemic with a haemoglobin (Hb) level <10mg/dl. 5 Anaemia in adolescents is mainly caused by iron deficiency due to the increased iron demand for pubertal growth, increased blood volume, and menstrual losses. Limited iron intake in the diet is another reason. 6 Reduction in the physical work capacity is due to the reduced Hb concentration, which leads to less oxygen availability to the tissues and cardiac output. 7 Decreased Hb is in turn due to the reduction in iron store affecting physical performance, and results in minimal oxygen consumption among anaemic subjects during exercise. 8 Cognitive function is affected due to the alteration in iron content of the brain and neurotransmitters. 9 Moreover, anaemia can cause the impairment of iron-dependent enzymes such as noradrenalin, serotonin, and dopamine that are important for normal functioning of the neurotransmitters. 10 The risk factors associated with anaemia during ] adolescence justify the need for interventions, as most of the programmes are usually designed to prevent anaemia in infants, young children, lactating and pregnant women, but not necessarily in adolescents whose needs remain neglected despite them being at a high risk of facing detrimental health effects. The current study was planned to determine risk factors associated with anaemia among school-going adolescent girls.

The cross-sectional study was conducted at 10 high schools in district Peshawar, Khyber Pakhtunkhwa (KP), Pakistan, from October 2016 to June 2017, using convenience sampling and giving consideration to the fac t that the selected sample should cover the geographical, ethical and economic variability of the study region. Those included were school-going adolescent girls aged 10-14 years. Those with blood Hb level <12 g/dl were taken as cases, and those with Hb 12 g/dl acted as controls.2 Girls with terminal illness, physical disability, chronic diseases, and metabolic disorders were excluded, and so were those who failed to provide informed consent. A pre-designed and pre-tested questionnaire was used for data collection regarding socio-demographic, anthropometry, dietary intake pattern, physical work capacity and cognitive function of the subjects. Data regarding age, gender, socioeconomic status, family size, family education, family occupation and family type were collected by interviewing the subjects, and were recorded. Water/Sanitation, Assets, Maternal education and Income (WAMI) index was used to measure socioeconomic status (SES). This includes four variables, i.e., access to improved water and sanitation, mother's year of schooling up to 16 years, presence of 8 priority assets, and monthly household income. Each variable was scaled ranging 0-8. The scores were summed up and divided by 32 to obtain WAMI index range 0-1; 0 denoting poor SES, and 1 denoting high SES. All score were converted into quintiles. 11 Nutritional status of the subjects was assessed by measuring their weight, height, and body mass index (BMI) using standard procedures. Height for age and weight for age z-score was determined using World Health Organisation (WHO) growth standards. 12Blood Hb concentration was determined by using Hemocue method, while the dietary intake pattern was assessed using a 24-hour recall method. Physical work capacity of the subjects was assessed using Modified Harvard's Step test with slight modification. 13 Pulse rate of the subjects was first checked at rest, and they were asked to climb up and down a set of five steps for up to three minutes as fast as they could. The total number of steps climbed up and down was counted. 13 Pulse rate of the subjects was measured after the physical activity and was recorded after every minute up to 3 minutes. 14A specially-designed intelligence quotient (IQ) questionnaire, Raven's Coloured Progressive Matrices, obtained from the Psychology Department of the University of Peshawar, was used for this purpose. Time for the test was 30-60 minutes. It is a very simple and easy test which is culture-free, language-free, nationality-free, and usually covers a wide range of age and ability. It is used to assess a person's immediate capacity for observation, clear thinking and accurate intellectual work. 15 Data was analysed using SPSS 16. 16 Descriptive statistics like mean and standard deviation (SD) were used for quantitative variables, and frequencies and percentages for qualitative variables. Association between categorical variables was tested with Chi-square test. Independent t-test was applied to compare the means between cases and controls for physical work capacity and cognitive functions. Correlation of different variables with anaemia was determined using Pearson's correlation test. 17 All tests were per formed at a significance level of 0.05. 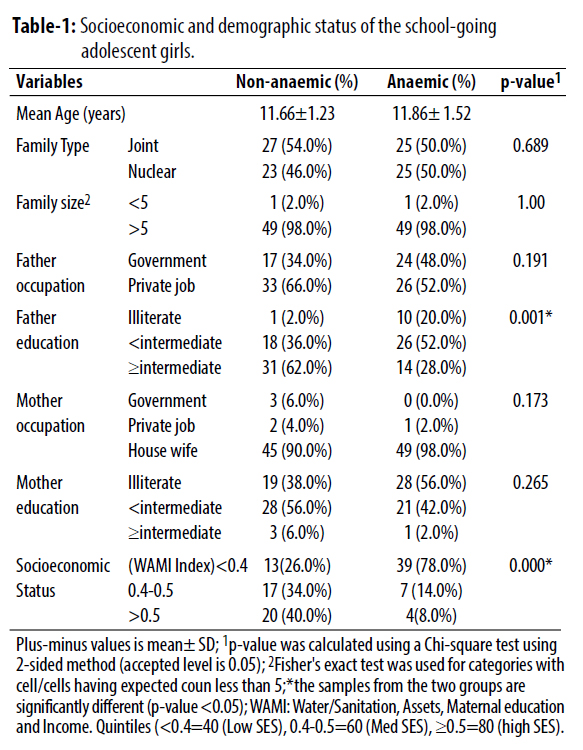 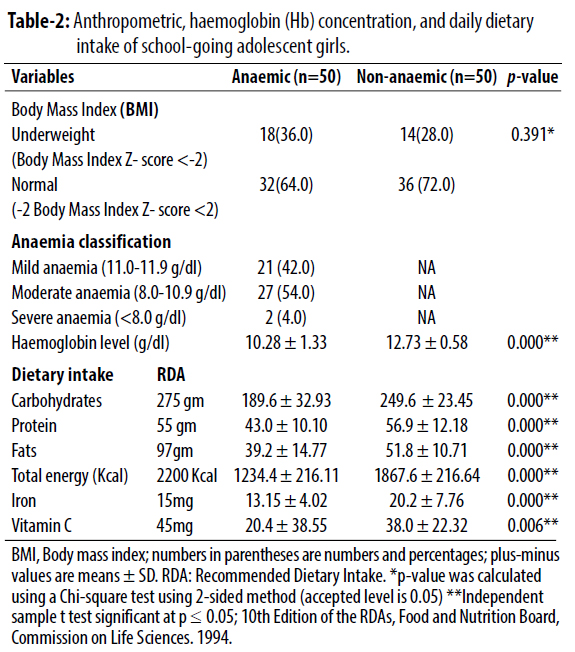 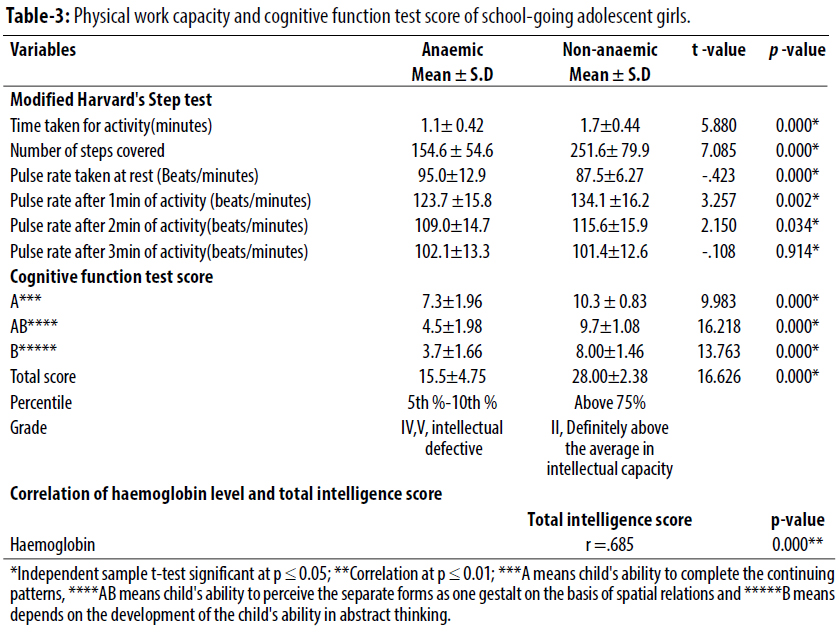 Mean number of steps climbed by the cases were 154.6±54.6 and a longer period of time was taken to recover the basal pulse rate by them compared to the controls (p0.05). The mean resting pulse rate in the cases was significantly higher compared to the controls (p0.05). Also, the cases scored significantly lower in the cognitive function test (p0.05). Bivariate regression analysis showed a significant positive correlation (r =.685; p<0.05) between Hb level and total intelligence scores of the schoolgoing adolescent girls.

Disclaimer: The manuscript is part of a PhD thesis.
Conflict of interest: None.
Source of Funding: This project was funding by the Matching Funds Project of Northeast Agricultural University.