Objective: To determine effectiveness of sustained natural apophyseal glides with and without thoracic postural correction techniques on patients of chronic mechanical low back pain .
Methods: The randomized control trial was conducted at the National Institute of Rehabilitation Medicine, Islamabad, Pakistan, from November 1, 2015, to January 31, 2016, and comprised females aged 20-60 years experiencing mechanical low back pain for more than 03 months. They were randomly assigned to two equal groups. Group 1 was given Mulligan sustained natural apophyseal glides mobilization, while group2 was given the same along with thoracic postural correction techniques for 4 weeks, 3 sessions per week and one session per day. Outcome measures included Numeric Pain Rating Scale, Oswestry Disability Index and Goniometry of Lumbar Range of Motion. Data was analysed using SPSS 20.
Results: Of the 40 patients, there were 20(50%) in each of the groups. Mean age of patients in group 1 was 41.30±10.45years, while in group 2 it was 35.12±9.04 years. Compared to the baseline readings, pain, functional independence and range of motion showed significant improvement (p<0.0001) postintervention in both groups. Mean scores in group 2 showed more improvement than group 1 (p<0.0001) in all variables.
Conclusion: The effectiveness of thoracic postural correction exercises along with sustained natural apophyseal glides was noted in patients with mechanical low back pain
Keywords: Low back pain, Mulligan , Posture, SNAGS. (JPMA 69: 1584; 2019). doi: 10.5455/JPMA.274875.

Pain in the region between the bottom of ribs and the buttock crease is referred to as low back pain (LBP) which can be due to diverse conditions. It is estimated that 80% of adults experience LBP at some point during their life.1 More than 60% of consultation in private physiotherapy clinics is because of LBP. 2 Male and female individuals are affected equally. 3 It is a major problem that causes activity restriction, work absence and financial burden on families, communities, industries and government. Back pain presenting with musculoskeletal disorders and those with red flags can be differentiated by means of careful history and examination. 4 Clinical presentation can differ but majority of patients will complain of pain that either centralises or radiates to lower extremities. 5 Mechanical LBP is a general term used to refer to pain that does not have any specific cause or that is not related to any serious spinal pathology. 6 About 90% of patients presenting to primary care sufferer from mechanical LBP and majority of them present to physiotherapy. A wide range of managements are available for LBP, ranging from conservative management to surgery with different treatments specifically targeted toward different causes. Among conservative treatments, physical therapy (PT) interventions are of prime importance. They can be provided in the form of transcutaneous electrical nerve stimulation(TENS),laser therapy, massage, traction, heatcold, and exercise therapy. 7 A balanced approach, which deals with patient's psychosocial factors and includes multidisciplinary care, increases the probability of success from back pain interventions. 8 Posture involvement is evident in back pain. The rule of thumb is that pain leads to bad postures and bad postures further aggravate pain. 9 When bad posture is fixed, it decreases pain significantly. Usually LBP treatment strategies focus on pain area and neglect proximal or distal areas to pain. But according to emerging concept of regional interdependence, it is necessary to treat proximal and distal area too for better outcomes. 10 Involvement of thoracic spine posture in chronic LBP is proved from literature but rare evidence is present on treatment of posture correction to LBP. Commonly active stretches and therapist-facilitated stretches are given to correct thoracic posture. Effects of lumbar Mulligan sustained natural apophyseal glides (SNAG) on patients with non-specific LBP is evident in literature. 11 SNAG involves application of accessory passive glide to lumbar vertebrae by a physiotherapist while the patient will simultaneously perform an active movement. Glide given is in the direction of the plane of facet joints, and technique is usually performed in weight-bearing position like standing, sitting etc.4,12 The current study was planned to determine the effectiveness of SNAGS with and without thoracic postural correction techniques( TPCTs) on pain, functional independence and range of motion (ROM) in patients of chronic mechanical LBP.

The randomized control trial (RCT) was conducted from November 1, 2015, to January 31, 2016, at the Physical Therapy Department of the National Institute of Rehabilitation Medicine (NIRM), Islamabad, Pakistan, comprising females aged 20-60 years experiencing mechanical LBP for more than 03 months. The patents were enrolled after approval was obtained from the institutional ethics committee. Informed consent was taken from all the subjects. Those excluded were females outside the age range, or experiencing pain for less than 03 months, as well as those who had radicular pain, chronic pathological pain or any surgical history of lumbar spine. Sample size was calculated by using epitool sample size calculator. 13 For Pain variable, Mean of group 1 was 35.1±13.19 and for group 2 , Mean was 19.7±6.14 with 95% CI, total sample size calculated was 16 with 8 in each group. 14  To generalize it on normal population, sample of 30 patients was set but all the patients fulfilling inclusion criteria visiting the department during the study period were recruited for study and total sample of 40 patients was included in the study.Non probability convenient sampling technique was used for initial enrollment of participants in the study then after enrollment participants were randomly allocated in to two groups (n=20) each by using toss and trial method. Baseline assessment using Numeric Pain Rating Scale(NPRS), Oswestry Disability Index(ODI) and Goniometry was done respectively for Pain, Function independence and Lumbar range of motion for both groups before initiating any treatment. Post treatment assessment was done after 04 weeks using same outcomes measures/tools. Group 1 acted as the control group, and was given hot pack, TENS and Mulligan SNAGS mobilisation with movement. Group 2, which was the experimental group, was given the same treatment along with TPCTs. SNAGSwere applied in flexion, extension and rotation. They were applied for a few seconds with 3 repetitions on the first day and 10 repetitions from the next visit. TPCT included active as well as therapist-facilitated stretches. Active stretches were thoracic extension in sitting, Wall angle stretch and Corner stretch, while the therapist-facilitated stretches were seated mid-thoracic stretch and pronemid thoracic stretch. Stretches were maintained for 15-20 seconds with 10 repetitions of each stretch per session. Hot pack and TENS were applied for 20 minutes to both groups before treatment. TENS were applied at low intensity and high frequency for pain management. Intensity was set as per patient's tolerance. Sessions were given on alternate days, 3 days a week for 4 weeks to both groups. Home plan consisted of exercise therapy i.e. knee-to chest, bridging, back extension exercises, for both groups for 3 times a day with 10 repetitions of each exercise every day. Post-treatment assessment was done after 04 weeks using the same outcomes measures/tools as at the baseline. SPSS 20 was used for statistical analysis. Outcome measures were calculated as mean and standard deviation and compared by using paired and independent sample t-test. P<0.05 was taken as significant.

Of the 40 patients, there were 20(50%) in each of the groups. Mean age of patients in group 1 was 41.30±10.45years, while in group 2 it was 35.12±9.04 years. Compared to the baseline readings, pain, functional independence and ROM showed significant improvement (p<0.0001) post-intervention in both groups. Mean scores in group 2 showed more improvement than group 1 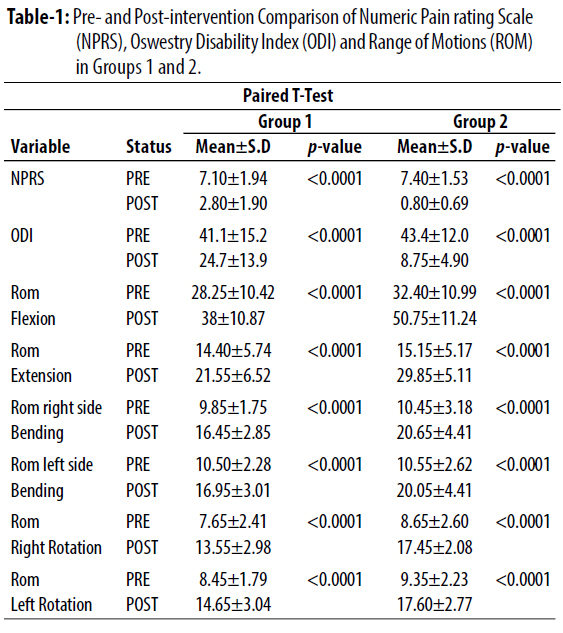 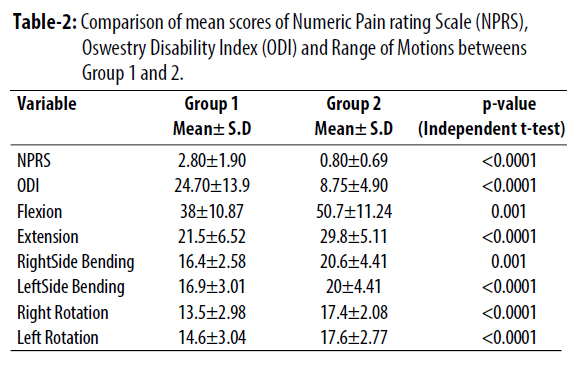 The current study showed the effectiveness of Mulligan technique of SNAGs in improving pain, functional independence and ROM of spine whether provided with or without thoracic posture correction exercises in patients presenting with mechanical LBP. A study done to investigate effects of thoracic mobilization in addition to lumbar stabilisation exercises in patients of chronic LBP had 36 subject and assessed balance, stabilisation and pain. It reported greater effect on  stabilisation of lumbar region, pain relief and improvement of function when lumbar stabilisation exercises combined with thoracic mobilisation were given to the patients. 15 Similar results were found in the current study as pain and functional levels along with ROM improved when TPCT exercises were provided along with mobilisation. Another study conducted to find out effects of thoracic manipulation and mobilisation on function and mental state of chronic LBP patients had 36 subjects randomly divided into mobilisation, manipulation and control groups. Mobilisation or manipulation to the thoracic lumbar vertebrae had a positive effect on function, mental state and ROM. The results also support the current study in which ROM and functional level increased when thoracic intervention was given for LBP. 16 Usually thoracic posture while treating LBP is overlooked, but evidence also supports the fact that there occurs  involvement of thoracic posture with back pain. A study conducted to measure and describe postural aberrations in chronic and acute LBP had 59 subjects divided into acute, sub-acute and chronic groups. Lumbar lordosis, thoracic kyphosis, head position, shoulder position, shoulder height, pelvic tilt, and leg length were measured using a photographic technique. Patients with acute LBP had increased thoracic kyphosis that might be the reason for persisted pain even after interventions. 17 In the current study, this aspect was also addressed in the form of posture correction exercises that were provided in addition to mobilisation. The addition of these exercises improved outcomes more in group 2 that received both types of treatment. A study conducted on 65 active, healthy oestrogendeficient women to correlate back extensors' strength with thoracic kyphosis revealed that strong back extensors helped in maintaining thoracic kyphosis as any intervention applied when they were weak only provided temporary effect. Keeping in mind the results of this study, the current study incorporated posture correction exercises and found improved outcomes. 18 A study done to compare the effects of SNAGS with Mckenzie reported that SNAGS were more effective in treating the patients presenting with chronic mechanical LBP. 19 Similar outcome measures were used as in the current study for measuring different variables. In the current study, SNAGS also proved to be effective in treating pain, functional independence and ROM in all directions. The results of the current study are in concordance with literature. 19 A study to find out immediate effects of modified SNAGs technique on pain, ROM and back performance in 30 patients with nonspecific chronic LBP found immediate results with it. In the current study, immediate effects were not found with SNAGS, but it provided promising results in both groups after 4 weeks of intervention. 4 In terms of limitations, the study had a short duration, investigated only short-term effects and included only female patients. It is recommended that further studies should be done with long-term follow-ups, with equal distribution of gender and with some other combination of therapeutic exercise with mobilisation in order to find the most effective treatment regimen for LBP. Immediate effects of different therapeutic manoeuvres should also be ruled out in future studies.

Conflict of Interests: None.