Carbon dioxide laser-assisted posterior cordotomy (LAPC) is an effective technique for the treatment of Bilateral Vocal Cord Paralysis (BVCP). For our case series we included 34 patients of BVCP from combined military hospitals of Rawalpindi, Lahore, Malir and Quetta and compiled the results of carbon dioxide LAPC which they underwent under general anesthesia between December 2009 to January 2017. Assessment of voice quality and breathing difficulty was carried out before and six weeks after the operation and graded according to scales. The complications after surgery were also noted. In the study, there were 10 (29.4%) males and 24 (70.6%) females. The mean age of the sample was 39.1 } 13.2 years. Overall, there was an improvement in breathing and mild worsening of voice quality after LAPC. The common complications after LAPC were dysphagia, revision surgery, and post-operative pain in 11.8%, 17.6%, and 17.6% respectively. The study concluded that carbon dioxide LAPC was associated with an improvement in breathing but resulted in a poor voice quality among patients with BVCP, along with a few side effects.

Bilateral vocal cord paralysis (BVCP) is an uncommon but a challenging problem for the otorhinolaryngologist. It commonly happens as an iatrogenic complication primarily (80%) in thyroid surgeries and to some extent in tracheal and esophageal surgeries.1 The main presenting symptom is difficulty in breathing though the voice quality is relatively good in these patients. 2 In postoperative cases, BVCP can be lethal if not timely diagnosed and managed. A number of surgical techniques, both open and endoscopic, are available for dealing with this problem. Former include laryngofissure while cordopexy, thyroplasty type-2, microlaryngeal excision of the cord, and carbon dioxide laser surgery of vocal cords, with and without arytenoidectomy are the common techniques in the later group. Endoscopic airway surgery, after initial popularity in 1960s, went into dormancy for some time, however, in recent years, there has been a gradual resurge in its popularity. This trend can be attributed to the availability of new and more sophisticated endoscopic instruments, adjunctive use of new pharmaceuticals, and the realisation that open and endoscopic techniques can often be used in a complementary fashion. With the addition of laser in the armamentarium of otorhinolaryngologist, a significant change has been observed in favour of endoscopic static procedures for the treatment of BVCP. Nevertheless, whatever surgical procedure is adopted for the treatment, the ultimate aim is to provide an adequate airway with preservation of the voice and laryngeal competence as far as possible. Laser, as compared to the conventional surgery, offers distinct advantages including short and bloodless procedure, minimal damage to the laryngeal tissue, no local oedema, and a short hospital stay. 3  We present here, our experience with laser-assisted posterior cordotomy (LAPC) in a series of cases; results are compared with those given in the contemporary literature. To the best of our knowledge, very few studies have been published in this regard in relation to our population.

This case series included 34 patients who were diagnosed with BVCP. These patients reported to the outpatient clinics of the departments of Otorhinolaryngology and Head and Neck Surgery in combined military hospitals of Rawalpindi, Lahore, Malir and Quetta between December 2009 to January 2017. Informed consent and permission from each respective hospital's ethical committee was obtained before commencement of the study. All these patients were subjected to detailed history, routine systemic, neurological, and otorhinolaryngologic examinations including direct examination of the larynx by fiberoptic nasoendoscope under local anaesthesia. The findings were recorded on a proforma. Patients with failed prior treatment, clinical evidence of a growth, fixed arytenoids, and recent (< 6 months) onset of paralysis were excluded from the study. Data collection included information about age, gender, voice quality, and breathing difficulty. Voice recordings were made immediately before and six weeks after surgery and analysed, both by the patient herself/himself and the treating surgeon. The assessment for voice was made according to following criteria: (normal=1, change noticed only by the patient =2, change noticed by the patient and close relatives=3, and apparent hoarseness=4). Respiratory distress was measured on Visual Analog Scale and categorized as: (No respiratory difficulty=10, difficulty on moderate to severe exertion (e.g. climbing stairs, running) =7-9, difficulty on mild exertion (e.g. walking, defecation, and micturition) =4-6, and difficulty at rest or stridor=1-3). In all patients, surgery was performed under general anaesthesia. Since all the patients were having tracheostomy, they were administered anaesthetic gases through the tracheostomy tube. An appropriate sized laryngoscope was used to expose and suspend the larynx. Ziess OPMI 1 FC endoscope (Carl Zeiss Meditec, California, USA) having a laser coupler with 400 mm lens was used for both visualisation and treatment. The machine was set in the super pulse mode with 0.1s pulse interval and 8-12 watts of energy setting. The junction of vocal processes of arytenoids with membranous part of vocal cords was identified. The true vocal process and the posterior third of the membranous cords were evaporated while anterior two thirds of vocal cords and the remaining part of laryngeal mucosa were protected with wet cotton foils. In all cases, the left cord was selected first. Only one side was operated at a time. Bleeding was controlled by applying pressure with cotton swab soaked in adrenaline (1:1000) to the evaporated area. All patients were advised intraoperative dexamethasone 4mg (Decadron, Obs Pharma, Karachi, Pakistan) 8 hourly  for 1st 24 hours to reduce laryngeal oedema. All patientswere given tablet amoxicillin: 875mg + clavulanic acid: 125mg (Augmentin, GlaxoSmithKline Pakistan, Karachi, Pakistan) 12 hourly for five days after the operation. Decannulation was attempted on the 5th post-operative day, and then daily till 21st post-operative day. If decannulation was not achieved three weeks after the operation, cordotomy was repeated on the opposite vocal cord, applying the same procedure mentioned earlier. Initially, patients were followed-up daily for two weeks, then weekly for the next 6 weeks, followed by once a month for two months. Patients were observed for the post-operative pain, bleeding, dysphagia, aspirations, breathing difficulty, and change in voice. The Statistical Package for Social Sciences v 20.0 (IBM Corp., Armonk, NY, USA) was used for all analyses. Means, standard deviation, minimum and maximum values were calculated for numerical data. Frequencies and percentages were calculated for categorical data. The breathing difficulty and voice assessment was quantifiedusing grading methods mentioned earlier. Paired sample t-test was applied to compare the mean score before and after the operation. A p-value <0.05 was considered significant. A total of 34 patients were included in the study out of which 10 (29.4%) were male and 24 (70.6%) were female. The mean age of the patients was 39.1}13.2 years;  minimum age was 21 years and the maximum age was 65 years. Etiology of BVCP was thyroidectomy in 24 (70.6%),esophagectomy in 4 (11.8%), and idiopathic in 6 (17.6%) cases. Pre and post-operative voice and breathing difficulty assessment is shown in Table-1. 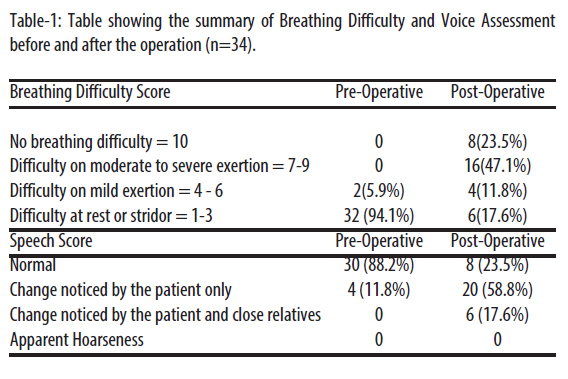 Overall, there was an improvement in breathing and mild worsening of voice after the surgery. We applied the paired sample ttest to the mean voice score and breathing difficulty score before and after operation. There was a statistically significant difference (p<0.05) as shown in Table-2. 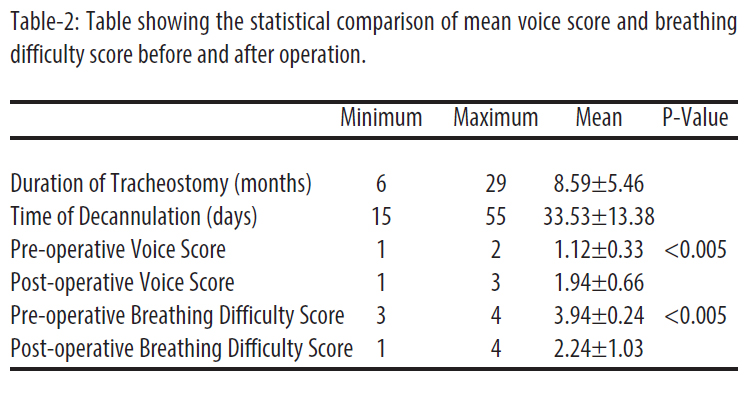 LAPC with or without arytenoidectomy is most popular now-a-days but there is scarcity of laser facility in Pakistan for otorhinolaryngological problems. Cordotomy without arytenoidectomy is the preferred surgical choice in BVCP because it is less destructive and there are lesser chances of aspiration. Cordotomy can be suggested as a substitute to tracheostomy even at the time of diagnosis. 2  Improved ventilation and breathing is achieved in most patients with BVCP following LAPC 4-8 with some studies reporting an improvement percentage of 95%7 and 100%.8  In our sample, we also found a signifiacant improvement in breathing after operation. Regarding the voice outcome, we found a significant deterioration of voice quality in the whole sample after operation. Worsening of voice quality is a common side effect associated with LAPC. 9,10 Patients often complain of a rough and breathy voice because of damage to the vibratory part of operated vocal fold. Contrarily, some  authors believe that preservation of anterior and middle parts of vocal cords in LAPC, actually results in airway improvement thus producing good voice protection rather than deterioration. 4,11 In a nutshell,  LAPC is less than ideal to maximise the preservation of voice quality. 2,10 LAPC is associated with a minimal tendency for aspiration. None of the patients from our sample had symptomatic aspiration in the postoperative period and during follow up. These results are consistent with Mohamed et al, 4  Dursun and Gokcan, 12  and Harnisch et al. 13  Similarly, Khalil and Abdel Tawab found only a single patient reporting temporary aspiration in a sample of 18 cases. 6  The probable reasons suggested by Mohamed et al. 4  were preservation of the arytenoids and limitation of the surgical procedure to cordotomy only. These reasons arecomplemented by findings of Aubry et al5  and Shvero et al14  who combined cordectomy with partial arytenoidectomy and found an aspiration rate of 11.7% and 27.2% respectively. LAPC is associated with formation of granulation tissue and scar that retract the vocal fold to median position necessitating a revision surgery. 2  It was reported that bilateral or revision cordotomies were needed in about 30% of the patients due to decreased glottal opening from the formation of scar tissue or granulation. 2  In our study, 6(17.6%) patients had to undergo revision surgery due to dysphagia and other complaints as a result of granulation or scar tissue formation. Sometimes, the granulation tissue is so small that a redo surgery is not required. 6

Carbon dioxide LAPC was associated with an improved breathing but a poor voice quality in our patients with BVCP. The side effects of the procedure were minimal and 17.6% underwent a redo corrective surgery.

Conflicts of Interest: The authors declare that they have no conflict of interest.

Informed Consent: Informed consent was obtained from all individual participants included in the study.
Ethical Approval: All procedures performed in studies involving human participants were in accordance with the ethical standards of the institutional and/or national research committee and with the 1964 Helsinki declaration and its later amendments or comparable ethical standards.