This was a cross-sectional study. Survey was conducted from May 2016 to November 2016 among dentalpractitioners from four dental institutions of Karachi, two each from the public and private sector. From public sector, Dow University Hospital Dental Section Ojha Campus and Karachi Medical and Dental College, while from the private sector Baqai Medical University and Sir Syed College of Medical Sciences were randomly selected. After taking informed verbal consent, a total of 100 participants were interviewed using a self-administered questionnaire. The data were analyzed using SPSS version 21. Descriptive analysis was employed for categorical variables using frequencies and percentages. The findings of the study revealed the causes considered most important by the dental practitioners impacting migration abroad. Among the local push factors were bad law and order situation (59%), low salary (54%) and lack of job openings (53%) while local pull factor was mainly family responsibilities (40%). Foreign pull factors were better working environment (56%), high salary (52%) and enhancing knowledge and skills (50%) while the foreign push factor was racism (37%).
Keywords: Dental Practitioners, Migration, Push factors, Pull factors. doi:10.5455/JPMA.291597

The movement of people to a new area or country in order to find work or better living conditions is called "Migration" and those who migrated, leaving their country are called emigrants.1 Many highly skilled and competent professionals migrate to developed countries where there are more opportunities for productive growth both professionally and economically. Such countries offer professionals higher salaries resulting in financial, social and economic gains. 2  In Pakistan, the migration of healthcare workers is a common phenomenon that has resulted in an acute shortage of healthcare professionals. 3  Majority of international graduates in the field of medicine in the US and UK originate from poorer countries, and Pakistan is the third most common source. 4In 2005 it was reported that there were approximately 74,000 practicing physicians in Pakistan. Annually, about 1,150 physicians emigrate and an estimated 570 physicians discontinue their practice. The current ratio of 0.473 physicians to 1,000 populations is not adequate to maintain the nation's good health. 3   It is well known there are certain push and pull factors that bring about the migration of healthcare workers.1,5 Push factors are those that exist at the place of origin that pushes a person to migrate to the place of migration. Push factor includes lack of availability of resources, poor and unsatisfactory working environment, job dissatisfaction, terrorism, desire to settle abroad, relatives abroad etc. Pull factors are usually at the place of destination that attracts the person towards itself and include better job opportunities, lucrative salary, better working environment, job satisfaction, quality of training and better standard of life.5,6 The migration among health care professionals has received significant attention in the last few years, but the etiology of this migration has not yet been thoroughly examined in Pakistan. A better understanding and awareness regarding this migration of healthcare professionals from the country would help bring about changes in the current healthcare sector and academic policies. 7   The purpose of this study was to investigate the ever-increasing  migration of dental professionals from Karachi which could result in untoward consequences in the health sector. Since the literature suggests that the number of medical practitioners required to service the nation are decreasing day by day,2,3,6-9 it would be safe to assume a similar trend exists among dental practitioners. As far as the author's knowledge is concerned, a study has been conducted exploring the push and pull factors of migration among dental practitioners in Lithuania previously,10 however no prior study in this regard has been carried out in Pakistan. Therefore this study will serve the purpose of enhancing our knowledge regarding the serious issue faced by our health sector.

A cross sectional survey was conducted from May 2016 to Nov 2016 at four dental institutions in Karachi, two each from public and private sector i.e. Karachi Medical and Dental College, Dow University Hospital Dental Section, Ojha Campus, Baqai Dental College and Sir Syed College of Medical Sciences. Dental practitioners having at least one year experience after graduation and willing to participate in the study were included. Those dental practitioners already practicing abroad were excluded from the study. After taking their verbal informed consent, a cluster sampling technique was employed on a total of 100 participants enrolled for the survey. Participants were interviewed using a self-administered questionnaire given by the principal investigator. A pilot study was also conducted on 12% of the sample size to pretest the questionnaire which was modified accordingly. Reliability analysis of the questionnaire with Cronbach's alpha gave the value of 0.827 indicating a high degree of internal consistency.

Using the expected proportion of outcome variable from a previous study of 60.4%,6 with 95% confidence interval and 10% standard error, the calculated sample size was 92 participants using the following formula:

Data were entered and analyzed on Statistical Package for Social Sciences version 21. Descriptive analysis was employed by calculating frequencies and percentages for the study variables. Inferential analysis was performed by using Kruskal Wallis H test. 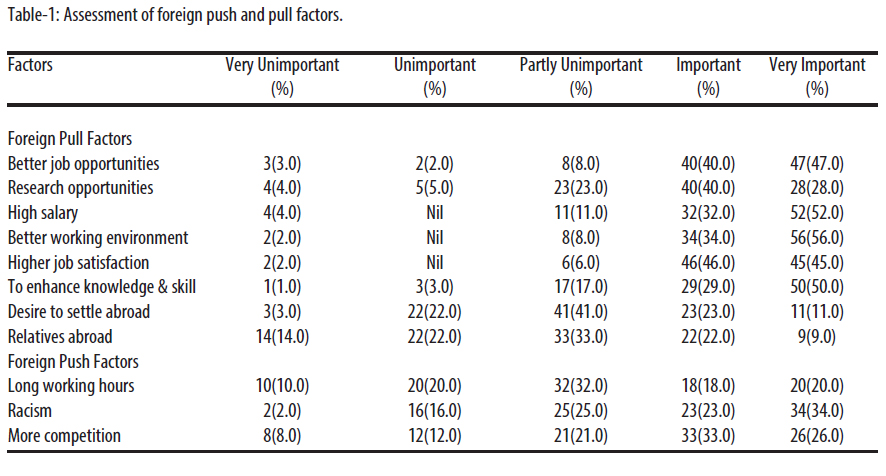 Among the local pull factors, the study results revealed 40(40%) of the participants responded that family responsibilities as the major reason, whereas 41(41%) reported alternative finances as a main factor. Among local push factors, those considered important by the study participants were lack of merit-based jobs by 43(43%), limited residency slots by 44(44%), lack of job openings by 53(53%), low salary by 54(54%) whereas bad law and order situation was reported by 59(59%) (Table- 2). Table-3 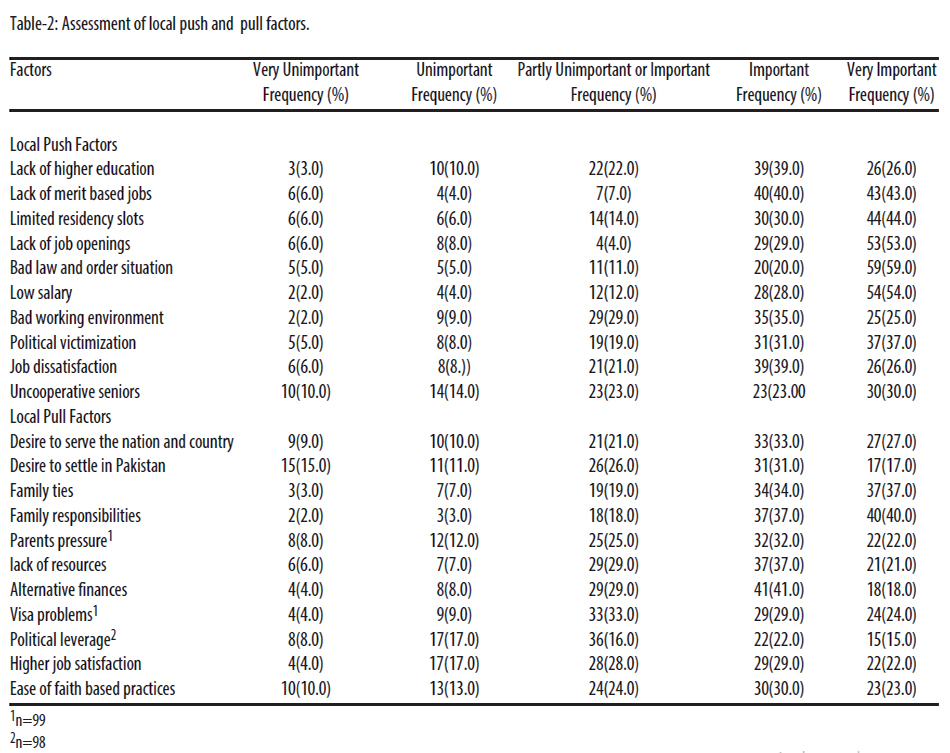 Disclaimer: This was the thesis Project of the corresponding author for the Masters in Public Health Program.

Funding Source: None to declare.

6. Sheikh A, Naqvi SHA, Sheikh K, Naqvi SHS, Bandukda MY. Physician migration at its roots: a study on the factors contributing towards a career choice abroad among students at a medical school in Pakistan. Global Health. 2012; 8:43. 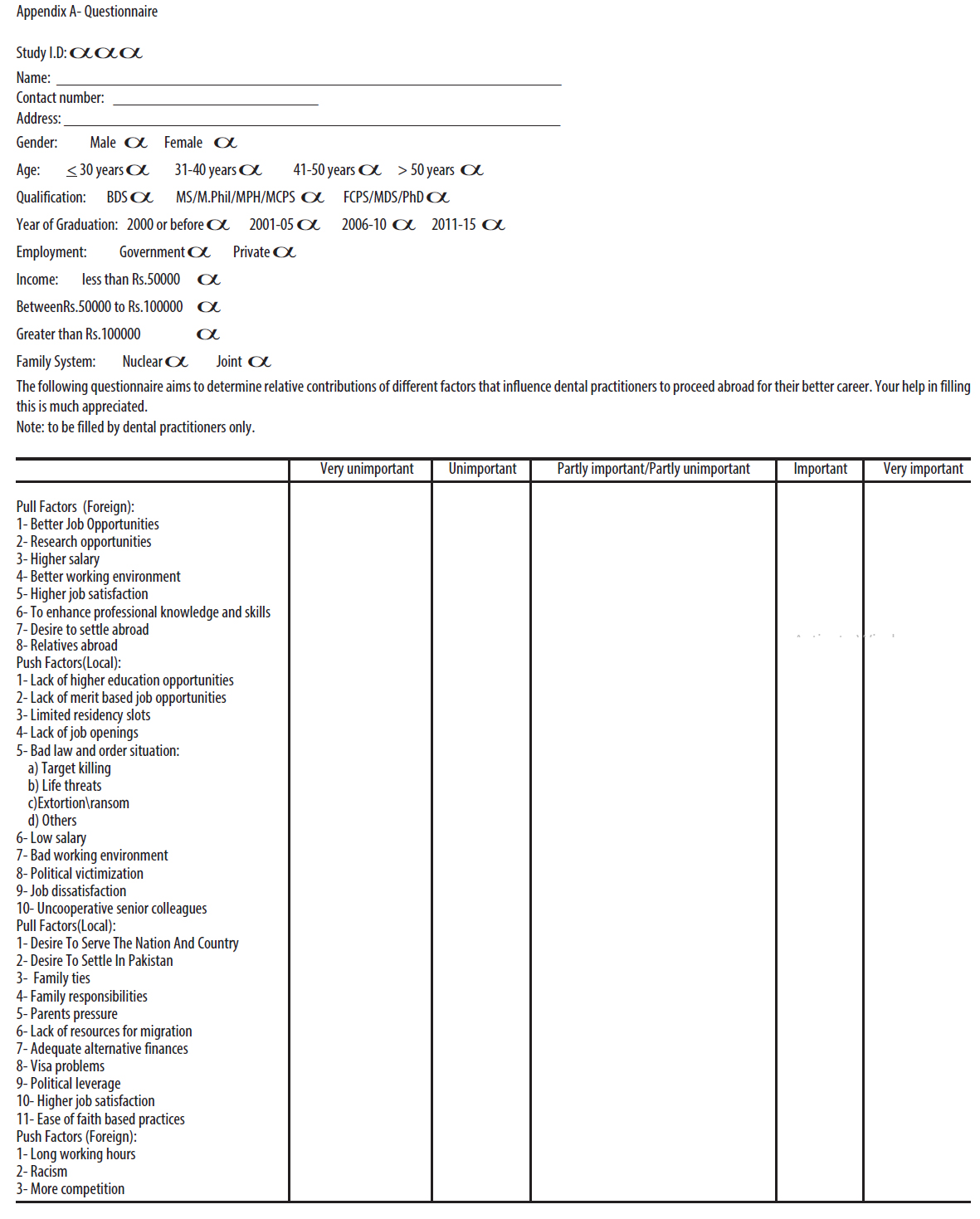