In the current study the occurrence and severity of iron deficiency anemia (IDA) was recorded from September, 2014 to April, 2015 in children of school age in District Tank. Random sampling of blood and questionnaires were planned to record general information while blood was analyzed through automatic haematological analyzer model Sysmex Kx- 21 Stromatolyser- WH, Cell Pack (Merck). Total prevalence of anaemia in school age children was 37.1% with 63.8% in boys and 64.3% in girls.

Across the entire world iron deficiency anaemia is an important dietary disorder.1,2 Anaemia occurs due to insufficient iron ingestion, decreased absorption of iron, amplified iron requirement, and increased loss of iron out of the body.3 Anaemia leads to dysfunction of immune, cognitive and motor systems. 4-7 Out of all types of anaemia about half are due to the deficiency of iron worldwide and women are most affected than male individuals.8 It is estimated that the proportion of anaemia in non-pregnant and pregnant women is 50% while 42% in children globally. According to a WHO report about 46% children in the world are anaemic, while the greatest percentage is present in less developed countries. The incidents may increase with time due to malnutrition and instability in various parts of the world. Iron-deficiency anaemia can lead to reduced muscle function and work capacity 9,10 and less explorative behaviour in school-aged children. 11 Iron deficiency or iron-deficiency anaemia is also consistently associated with impaired cognitive function and lower school performance in school- aged children.12,13 In rural areas of Pakistan most of the children are suffering from malnutrition that usually results in serious health disorders. The present study was conducted in district Tank with the aim to check the incidences of Iron deficiency anaemia in school age children.

The current study was accomplished in Tank, the southern District of Khyber Pakhtunkhwa province of Pakistan, extended over 1,679 km2 areas with an altitude of 265 meters (869 feet). There are three clusters (a subgroup of population)i.e. Cluster Mullazai, Garwakai and Tank city and sixteen union councils in the district. Random sampling was used where blood samples were collected randomly from school age children having different ages, gender, food habits and socio-economic conditions. Survey was carried out to collect relevant data about children. Samples size or number of individuals selected from each cluster randomly was calculated using formula

Questionnaires were set to collect data about age, black tea intake, gender, education, and social classes based on monthly income 14, use of unfortified cow milk, vitamin supplementation drugs and dietary intake. The principle author validated the Pashto version of questionnaire by involving two independent bilingual translators who performed forward and back translation and expert committee at Mission hospital Tank produced the final version of the translation. Samples were carried to the haematology department of District Headquarter Hospital Dera Ismail Khan during September 2015. For this analysis the automatic haematological analyzer model Sysmex Kx- 21 Stromatolyser- WH, Cell Pack (Merck) made in Germany, was used.

After collecting information from the selected sites of the study area through questionnaires, and the completion of laboratory tests, the Statistical analysis of data was carried out through software known as SPSS (software Package for the Social Sciences).

A total of 318 children of school age with between ages 5-12 years, both genders were questioned and examined clinically in the entire District of Tank. From cluster, Mullazai 67 girls and 39 boys, from cluster Garwakai 66 girls and 40 boys and Tank city 70 girls and 36 boys were observed for the presence of anaemia. The anaemia occurrence in school children of cluster Tank city was (31.1%) while in cluster Garwakai & cluster Mullazaiit was (34.0%) and (46.2%) respectively. Haemoglobin value in three clusters was; Tank city 31.3% girls and 30.8% boys, Garwakai 39.4% girls and 25.0% boys and highest in cluster Mullazai 47.1% girls and 44.4% boys were anaemic. 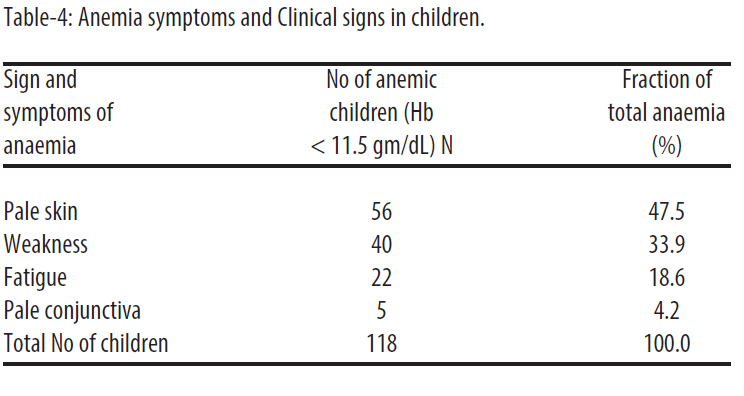 Data analysis shows that the sum fraction of anaemia was 39.4% in female and 33.0% in male children. The percentage of anaemia was higher (42.6%) in age group of 10-12 years than the other two age groups (33.6%) and (35%) of 5-8 years and 8-10 years respectively. Clinical symptoms and signs data show that 47.5% out of total anaemic children were pale; weakness was in 33.9% and fatigue in 18.6% children and pale conjunctiva was detected in 4.2% children. The occurrence of anaemia was high (38.4%) in the children of lower class followed by 36.1% anaemic children belonging to middle and 36% belonging to upper class parents. The anaemic percentage was 82.2% of mild anaemic children, while that of moderate and severe anaemia in children was 14.4% and 3.4% respectively.

It is estimated that 25% of the world population is affected by iron deficiency. The age groups most affected are infants between 4 and 24 months, school age children, female adolescents, pregnant women and nursing mothers. The current study showed the prevalence of Iron Deficiency anaemia in children between ages of 5 and 12 years, of both genders, living in District Tank was 37.1%. The reason was a high dietary requirement for this growth period. A study by Ullah I, et.al. 15  carried out in District Karak, found the prevalence of IDA to be 34.0%. However the National Health Survey of Pakistan (1990-1994). 16  showed dietary anaemia in children under five years of age was 62.9%. The urban school children of Punjab province showed a figure of 51.5% for IDA. The frequency of anaemia was higher in girls (39.4%) compared to boys (30.0%). The reason was that the mothers preferred to give more nutritious food to the boys than the girls. Karak district yielded comparable results with 39.4% girls having iron deficiency anaemia compared to 31.0% boys, both of school going age. These results are however comparable to results of the study by Ullah I. et.al. 15  showing IDA in girls being 38,9% and in boys 31.0%. The study done in Dera Ismail Khan in 2009 had results of 70% in girls and 58.8% in boys. 17  Researchers in Iran and Yemen have reported similar results with girls of school age to have a higher prevalence of IDA compared to boys.18,19 .Similar results were obtained from Karak district (40%), Pakistan. In Rishikesh, area of Uttrakhand state, India, the prevalence of anaemia was (48%) at age 9-12 years and (15.5%) in 5-8 years children.20 It was also observed that anaemia in low income class (38.4%) was comparable to that of district Karak, Pakistan (55.8%).15 In Rishikesh area of the Uttrakhand state of India the proportion of anaemic children was (65.2%) with (90.90%) of lower socio-economic group, while 37.5% in upper and middle class.20 Although at field level, estimation of haemoglobin is the only method available for diagnosis of anaemia, besides clinical assessment. However other methods viz; serum ferritin estimation, transferrin saturation and Erythrocyte Protoporphyrin are used but due to financial limitations common people of society have no access.

It is concluded that in rural areas of district Tank most of the school age children are suffering from iron deficiency anaemia. This indicates that nutritional problems are increasing in the rural area of Pakistan with rapid population growth and socio-economic problems. The following four strategic means should be adopted for prevention of iron deficiency anaemia: nutritional education and improvement of diet quality, including breast-feeding, medicine supplementation, food fortification and control of infections.

Disclaimer: None
Conflict of Interest: None
Funding Sources: None