Objective: To determine the distribution pattern of ABO and Rhesus blood groups among different ethnic populations in an urban centre.

Methods: The retrospective cross-sectional study was conducted at Kharadar General Hospital, Karachi, from May to Dec 2017, and comprised antenatal and walk-in individuals of different ethnic groups who were tested at the hospital's clinical laboratory. Blood groups typing was carried out using Slide Agglutination (antigen-antibody) method with antisera anti-A, anti-B, and anti-D. SPSS 16 was used for data analysis.

The retrospective cross-sectional study was conducted at Kharadar General Hospital (KGH), Karachi, from May to Dec 2017, and comprised antenatal patients and walk-in male individuals of different ethnic groups who were tested at the hospital's clinical laboratory. The antenatal attendees were included because blood grouping services from the clinical laboratory was mostly availed by pregnant women who came on antenatal visits. After approval from the institutional review board, convenient sampling was employed to raise the sample and subjects from Balochi, Pathan, Mohajir, Sindhi, Kutchi, Punjabi, Memon, Hindko, Bengali and Seraiki ethnic groups were enrolled after taking consent. Venous blood sample was collected from each participant through venepuncture, using 5ml disposable syringe which was emptied into the ethylenediaminetetraacetic acid (EDTA) (Purple top) Vacutainer tubes. Blood grouping of ABO and Rh typing were performed through conventional slide agglutination (antigen-antibody) method. Blood drops were placed on a cleaned tile at three places, then a drop of antiserum A, B and anti-D (SeracloneTM R by Bio-Rad Laboratories, Inc. Germany) was added and mixed with each blood drop using plastic stirrer. Blood was mixed thoroughly with the antiserum and rocked gently for 1 minute to observe agglutination. In case of doubt, the test was confirmed by reverse grouping, using known group A and B cells.16 SPSS 16.0 was used for data analysis descriptive statistics, including frequencies and percentages of ABO and Rh blood groups, were calculated. Pearson's Chi-square test was used to see the correlation between gender and blood groups/types. P<0.05 was considered statistically significant. 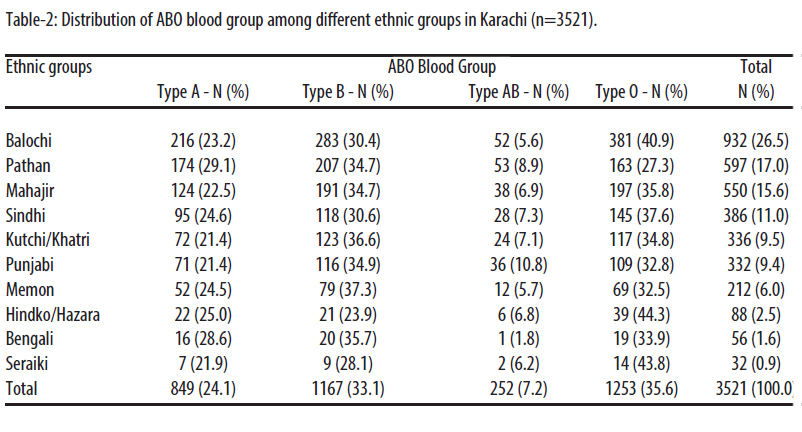 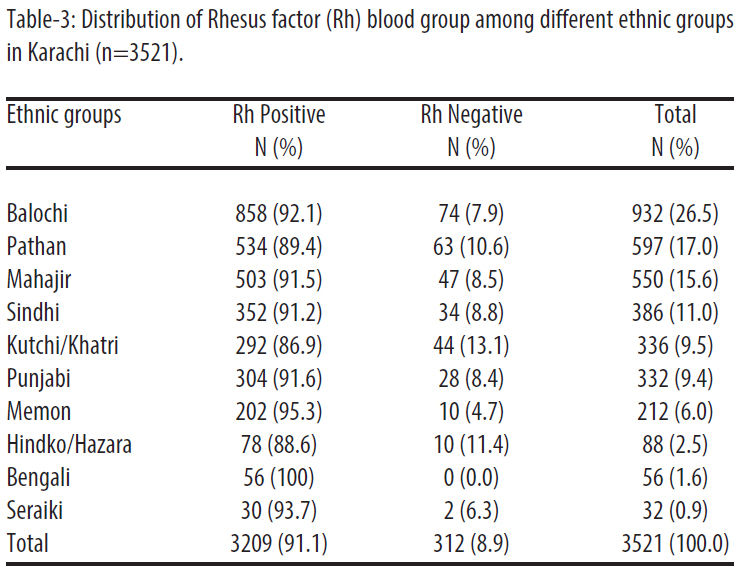 The ABO distribution, based on Rh blood group, among different ethnic groups was also significantly different (p<0.05). The most common blood group was O-positive 1140(32.4%) and the least common was AB-negative 18(0.5%) (Table-4). 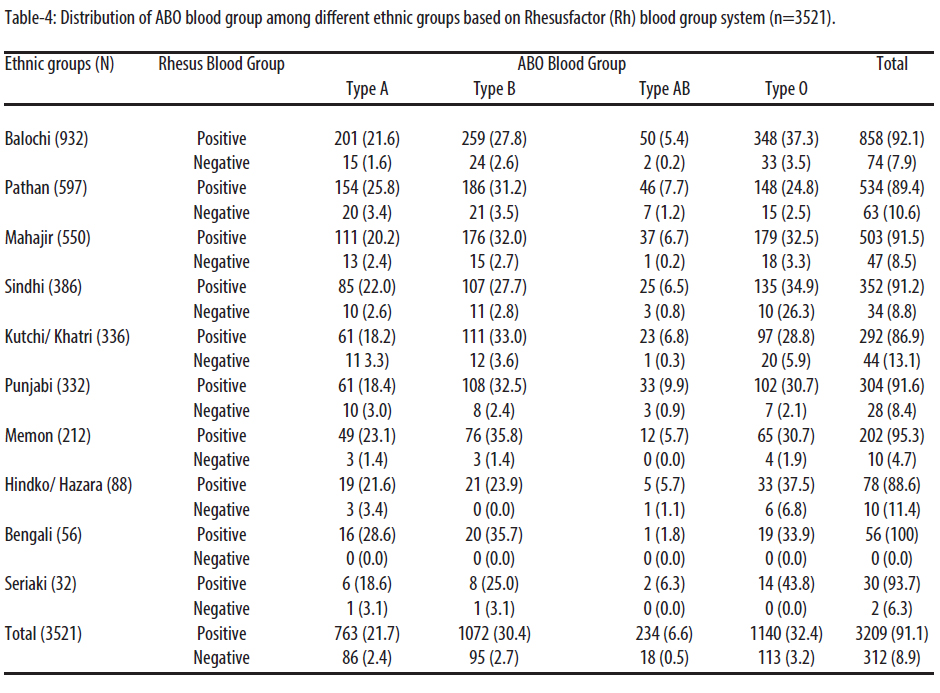 Knowledge of blood group distribution pattern is essential for blood banks and hospitals for safe blood transfusion and organ transplantation services. Frequency distribution pattern of blood group ABO among different ethnic groups of Karachi was the main finding of the current study which revealed that blood group O was the most common, followed by group B, group A and the least common was group AB (O>B>A>AB). Rh blood group was positive in higher proportion (91%) and negative in lower proportion (9%) of the study population. Similar findings were reported by a study conducted in Lahore. 9 Most of the studies conducted in different regions of Pakistan have reported contrasting findings as B>O>A>AB9-15 (Table-5). 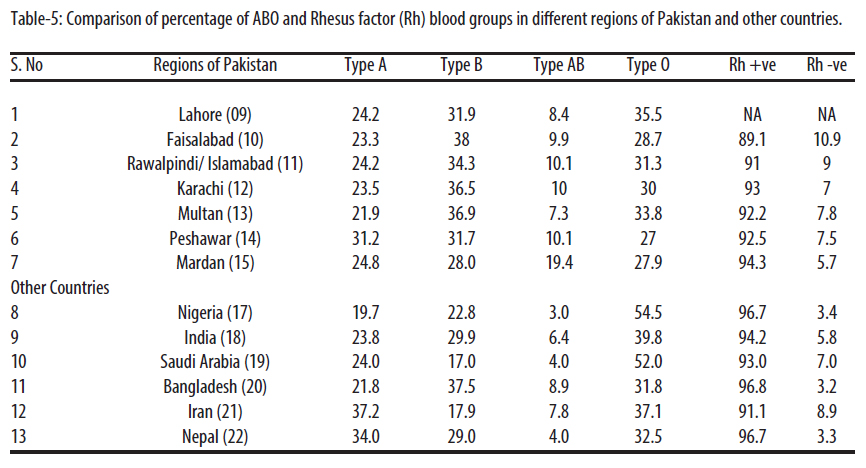 A 1988 study 12 reported that in Karachi, ABO pattern was B>O>A>AB. The current study has reported the pattern as O>B>A>AB. Karachi is considered to be mini-Pakistan because it is home to all communities that exist in Pakistan. Population influx in Karachi from less developed and trouble-hit areas of the country was very high in the last two decades. It might have impacted on distribution pattern of blood group ABO. Furthermore, this study had an adequate sample size of 3125 individuals compared to an earlier study12 which reported blood group pattern of only 200 participants. The major ethnic population of the city, such as Mohajir, Sindhi and Balochi, had similar distribution pattern of blood group ABO and the predominant was group O followed by group B, group A and then group AB (O>B>A>AB). Two other important ethnic groups of the city, Pathan and Punjabi, had contrasting finding, with the dominant blood group being B, followed by group O, group A and group AB (B>O>A>AB). Study has also reported that all ethnic groups had similar findings about AB, the least common blood group. Similar findings about AB have been reported from different cities of the country.9-15 Variation in distribution pattern of ABO blood group was also reported by different countries. Consistent to current findings O>B>A>AB has been reported by multiple studies from various countries.17-19 Contrasting results of blood group ABO distribution pattern to have also been reported by studies.20-22 Higher proportion of Rh-negative blood was observed in the United States as 17%,23 and Iran 10%.24 In Pakistan, Rh-negative frequency has varied from 5.4% to 10.7%.25 Gender-based variation in the distribution pattern of blood groups ABO and Rh was not significant in the current study. More than 90% participants were female, with the female-to-male ratio being 10:1. Therefore, gender-based independent ethnic distribution pattern of the blood groups was not analysed. The main limitation of the current study was its use of convenient sampling which led to a predominance of antenatal visitors. Another limitation was unequal proportion or unequal sample size of the ethnic groups. It was because Balochi, Mahajir and Pathan individuals who live around KGH were usually the most frequent visitors to the study site. However, the study is significant especially for blood banks and local hospitals of the area providing blood transfusion services. The blood grouping study will help in efficient delivery of safe blood transfusion services to the communities, particularly during emergency situations like road traffic accidents (RTAs), natural disasters, and other heath emergencies. Study findings will also encourage relevant authorities to frame better