A retrospective study of complications of total thyroidectomy; is it a safe approach for benign thyroid conditions

Objective: To assess frequency of complications of total thyroidectomy for benign thyroid diseases.

Methods: The retrospective descriptive study was conducted at Shifa College of Medicine, Islamabad, Pakistan, and comprised patient data from March 2016 to March 2018 of all patients who had undergone total thyroidectomy at the centre. Operative findings and post-op complications were documented in a self-generated proforma. Followup visits documented in the charts were also reviewed. Patients who did not keep the follow-up appointment were interviewed over the phone. Data was analysed using SPSS 20.

The retrospective descriptive study was conducted at Shifa College of Medicine, Islamabad, Pakistan, and comprised patient data from March 2016 to March 2018 of all patients who had undergone total thyroidectomy at the centre. Since the hospital turnover is quite low at about 80-100 thyroid patients per year, the sample size was calculated using the Slovin's formula:

The sampling technique used was nonprobability convenience. Patients aged 20-60 years who underwent total thyroidectomy for any of the benign thyroid diseases, like Grave's disease nonresponsive to medical management and MNG (toxic or euthyroid) were included. Those excluded were patients who had undergone thyroidectomy for recurrent goitre. Patients enrolled were contacted via phone to obtain consent for inclusion. Results of preoperative assessment from history, examination, complete blood picture (CP), thyroid function tests, chest X-rays, electrocardiogram (ECG), indirect laryngoscopy and serum calcium levels were documented. Reports of radioisotope scan and fineneedle aspiration cytology (FNAC) were also reviewed and documented. Operative findings and post-op complications were documented in a self-generatedproforma. Patients' follow-up visits documented in the charts were also reviewed. Those who had not kept follow-up appointment at the hospital were interviewed on the phone for any complications and their recovery. Data was analysed using SPSS 20. Descriptive statistics were used to calculate mean and standard deviation for numerical variables, like age, duration of admission and serum calcium levels. Frequencies and percentages were presented for categorical variables, like clinical diagnosis, history of premedication for thyroid disease, tissue diagnosis, isotope scan, indirect laryngoscopy, operative findings, procedure, status of RLN, primary haemorrhage, tension haematoma wound haematoma, post-op pain, wound seroma, hoarseness of voice and hypocalcaemia.

Of the 96 patients, 78(81.2%) were female and 18(18.7%) were male. The overall mean age was 32.9+9.84 years (range: 22-60 years). A total of 19(19.7%) patients needed treatment with anti-thyroid drugs and beta blockers to be rendered euthyroid before surgery. Clinically, 91(94.7%) patients had bilateral MNG, 1(1.04%) had a solitary nodule, and 4(4.1%) had a dominant nodule. Histopathologically, 80(82.1%) patients had multinodular adenomatous goitre, 2(2.08%) had a benign colloid cyst and 2(2.08%) had follicular adenoma. There was no case of malignancy, and zero mortality. Hypocalcaemia was the most common complication in 4(4.1%). Chvostek's sign was positive in 3(3.12%) patients, while 1(1.04%) had carpopedal spasm. Hypocalcaemia was transient in 3(3.1%) patients and permanent in 1(1.04%). Superior thyroid artery was divided between ligatures and individual branches of inferior thyroid artery were either clipped or ligated and cut. Haemorrhage occurred in 1(1.04%) patient. It was identified at the time of reversal of anaesthesia, and immediate reexploration was done and slip of ligature of superior thyroid artery on the right side was identified and it was controlled with transfixation of artery. RLN was identified dissected along its entire course and preserved in all surgeries. RLN injury occurred in 2(2.08%) patients both of whom had hoarseness of voice in the postoperative period which went away in three months (Table; Figure). 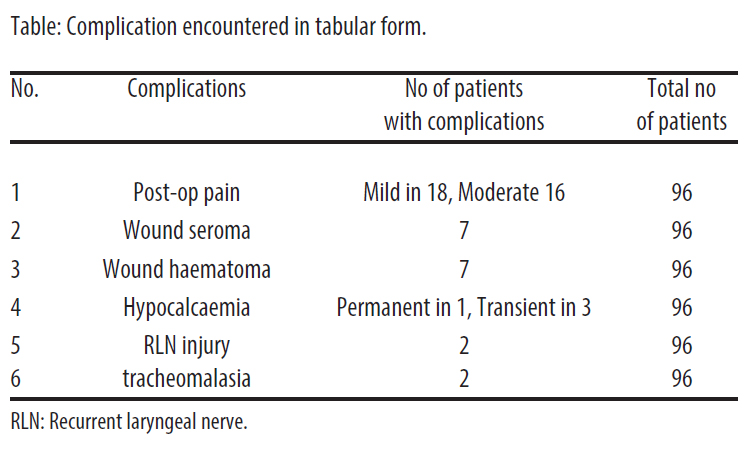 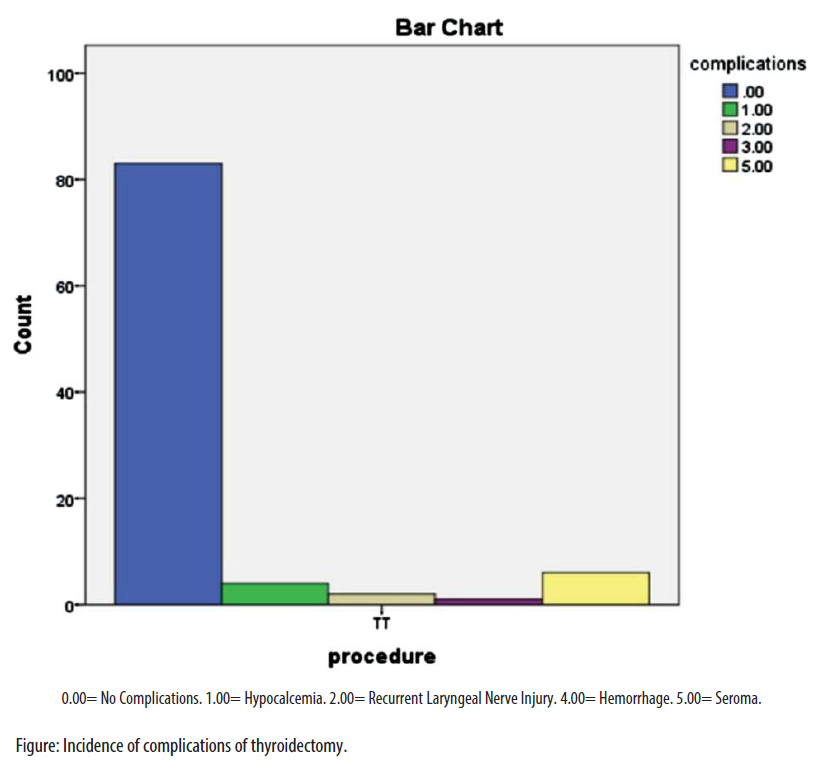 All patients were receiving replacement dose of thyroxine and had normal values in thyroid function tests.

MNG should be treated with total thyroidectomy because nodularity usually involves the whole gland, nodules limited to a single lobe apparently are usually dominant nodules in the background of an MNG. 7 Nevertheless, there is to date no consensus on type of thyroidectomy to be preferred for benign thyroid disease. Protagonists of conservative approach believe it is preferred for avoidance of lifelong dependency on levothyroxine and of complications of thyroidectomy like RLN or permanent hypo-parathyroidism. 9 Some surgeons believe in a more individualised approach for endemic goitre rather than total thyroidectomy in all cases. The basis of this approach is the observations that recurrences after conservative surgery in endemic goitre occur late and do not always require surgery.7,9,10 Even after subtotal thyroidectomy, patients either require replacement or suppressive dose of thyroxine. While suppressive dose potentially increases risks of cardiac arrhythmia, it does not significantly prevent recurrence.7,11,12 The risk of surgical complications cannot be eliminated in any surgical approach. Major complications of thyroid surgery include compressive haematoma, RLN injury and hypo-parathyroidism. Complications relating to damaged individual structures can be kept to a minimum by operating in a bloodless field and performing a meticulous anatomical dissection.13,14 Postoperative bleeding into the wound is a serious complication of thyroidectomy. When bleeding and haematoma occur deep to the strap muscles, the situation can rapidly develop into life-threatening emergency because of associated airway obstruction. 13 While many experienced surgeons prefer conventional suturing for haemostasis,15-17 innovations in surgical techniques and routine use of new surgical tools have resulted in better outcome of thyroidectomy in terms of haemostasis. 16,17Vascular structures coagulated with vascular sealing devices (VSDs) introduced in the 2000s can be safely transected without requirement for further ligation. 16 The reported incidence of postoperative bleeding in the literature ranges from 0% to 5%.13 Haemorrhage was seen in only1(1.04%) patient in our study. In national literature, a study reported incidence of 1.4% (2 patients) postoperative bleeding. 13 Hypocalcaemia is also a frequently encountered postoperative complication of thyroidectomy. It is usually detectable 24-48 hours after surgery.18,19 Postoperative hypocalcaemia can be a significant clinical problem, which may delay patients' discharge and requires considerable care in immediate postoperative period. 13 We studied 96 patients who had undergone the procedure over a 2-year duration and the most common complication was hypocalcaemia in 4 of the 96 patients. Of them, 3 patients recovered in 6-8 weeks whereas one patient had permanent hypo-parathyroidism. A study reported hypocalcaemia in 3.5% of patients and 1(0.7%) of them developed permanent hypo-parathyroidism. 15 Most of the studies evaluating the incidence of hypo-parathyroidism in thyroid surgery did not exclusively focus on total thyroidectomy. One study reported that incidental parathyroidectomy occurred in 100(19.7%) of 508 patients. In the current study, the incidence was much lower and may have been achieved by careful dissection staying close to the thyroid capsule, ligation of branches of inferior thyroid artery and the fact that all the operations were performed by highly experienced surgeons.20,21 Published rates of RLN injury varies widely in literature. The cause for this is the difference in definition, diagnostic biases and reporting. Either temporary or permanent, 1% incidence is reported for unilateral lobectomy and 2-3% for total thyroidectomy.5,22 Incidence of RLN injury in the current study was 2.08%. There is a varying prevalence of RLN injury in literature ranging 0-14%.13 In a study by Sadler GPRLN injury was observed in 4(2.8%) patients. 14Permanent RLN palsy rate of 1.4% in the present study was comparable with international literature reporting 0.3-1.7%.13 Five other studies reported very low permanent RLN palsy rates.23,24-28 Four other studies reported intermediate rates.23,29-32 In contrast, certain studies reported higher permanent RLN palsy rates.33-36 This difference in complication rates reflects variation in surgical expertise, nature of operation and number of surgeries performed at that particular centre.

Simple MNG constitutes most goitres and can beeffectively treated with total thyroidectomy for benign conditions followed by replacement of thyroxine. Preoperative risk evaluation and counselling reduces morbidity and mortality. Transient hypocalcaemia was found to be the most common complication of bilateral surgery. Clinical and biochemical hypocalcaemia should be monitored in these patients and replacement by calcium and vitamin D should be done. Identification of RLN and ligation of inferior thyroid artery near the gland is associated with better outcome.

Conflict of Interest: None.
Source of Funding: None.

10. Dralle H, Lorenz K, Machens A. State of the art: Surgery for endemic goiter--a plea for individualizing the extent of resection instead of heading for routine total thyroidectomy. Langenbecks Arch Surg. 2011; 396:1137-43.