Objectives: To find interactions of the ligand with axonali nhibitors, and to check the optimum interactions of existing drugs as inhibitors for the protein that hinders the growth of injured neurons.

Methods: The study was conducted at Kongju National University, Korea from May 2016 to March 2017. It consisted of two parts. Molecular analysis and bioinformatics analysis. The study comprised a family of six with Charcot-Marie-Tooth phenotypes, recommended by a neurologist for molecular analysis on the clinical symptoms to find the mutations responsible for the disease. Blood samples were collected from each family member and total deoxyribonucleic acid was extracted and it was analysed for Reticulon 4 gene by sequencing the coding and intronic regions. However, a missense mutation was found on exon 2 of the gene in the proband and the whole family was subsequently analysed. Bioinformatics analysis and docking studies were carried out to investigate the potential behaviour of Reticulon 4 as therapeutic agent. Sequencing analysis was performed to find the pathoegenic variant responsible for Charcot-Marie-Tooth type 1.

Results: After checking pathogenicity of the mutation, Reticulon 4 gene was found to be not involved in Charcot- Marie-Tooth disease type 1.

Conclusion: Reticulon 4 gene was not found to be involved in causing Charcot-Marie-Tooth disease type 1.

Neuromuscular junction (NMJ) is a chemical synapse formed by the contact between motor neuron of a skeletal muscle tissue. As a result motor neuron is able to transmit the signals which leads to muscle contraction. Damages to motor neuron lead to nerve-muscle signalling through distraction of the NMJ which can lead to various neurodegenerative conditions either demyelinating or axonal. 1-3 Such disorders can be inherited or autoimmune. The precise disease mechanism for such disorders is still unclear, and irregularities in the cell death process signalling and some other signallingpathways of muscle have been associated with such illnesses.4 Genetic disorders arise as a result of mutation in structural protein that comprise the neuromuscular junction. Demyelinating diseases, such as multiple sclerosis (MS) and Charcot-Marie-Tooth (CMT), are accountable for a significant portion of the neurological disability burden worldwide, especially in young adults. 5Demyelination can be pursued by an impulsive regenerative progression called remyelination in which new myelin sheaths are repaired to uncover axons. In a continual demyelinating disease, such as MS, this progression becomes gradually less efficient.6,7 Reticulon-4 (RTN4) is also recognized, like neurite outgrowth (Nogo) inhibitor, acknowledged as a Nogoinhibitor specific to the central nervous system (CNS).8,9 Few studies have shown that by blocking RTN4, the remyelination effect became obvious.5,8 Numerous practical molecules strongly related to axonal renewal contribute not only to the nervous system but also the immune system. Various studies have exposed that these molecules are linked with neurological and immunological aspects of MS pathogenesis. 6 Three molecules, Nogo-A, (myelin-associated glycoprotein) MAG, and Oligodendrocyte myelin glycoprotein (OMgp) are created by oligodendrocytes and play a role in neuronal receptor mechanisms through Neuronal Nogo- 66 receptor 1 (NgR1) and paired immunoglobulin-like receptor B(PirB). Each molecule has an axon inhibitor role in vitro, but their in vivo connections and comparative strengths have not been defined. 10 It is well established now that the membrane protein Nogo-A and its receptor Nogo-receptor (NgR) have a role in limiting axonal growth, regeneration, and flexibility in CNS. Latest studies also suggest that Nogo and NgR can be a candidate gene for schizophrenia vulnerability11 and receptors. 12 It was observed that fasudil treatment increases the number of regenerating axons with large diameter, confirmed by histological analysis, signifying that axon maturation is made easy by Rho-kinase inhibition These findings suggest that Ras homolog gene family, member/Rhoassociated protein kinase A RhoA/Rho-kinase may be a practical molecular target to enhance axonal regeneration in human peripheral neuropathies. 13Findings suggest that RhoA/Rho-kinase alone may not account for the irreversible arrest of axon outgrowth in the chronic stage of injury in CNS. 14 CMT type 2 is a varied group of axonal neuropathies with motor and sensory irregularities and signs of axonal degeneration on the electro-diagnostic investigation and in sural nerve biopsy specimens.15-17 This suggests that membrane-shaping disorders might be regarded as acontinuous disease spectrum of the axon. 18The current study was planned to scrutinize the possibility of an accessible association among the trial bioactivities of the inhibitors under study and the docking values.

The study was conducted at Kongju National University Korea from May 2016 to March 2017. It was divided into two parts. Molecular analysis and bioinformatics work. The study comprised a family of six with CMT phenotypes, recommended by a neurologist for molecular analysis on the clinical symptoms to find the mutations responsible for the disease. The Protein sequence of RTN4 was rescued for protein modelling. The amino acid sequence was retrieved from the National Center for Biotechnology Information (NCBI), Maryland, and United States (US) for the RTN4 gene. The computerized protein modeling online programme Swiss Modeller was used to predict the three-dimensional (3D) structure of RTN4 by satisfying spatial restraints. 19 Rampage 47 ProCheck 48, Anolea 49, and ERRAT20-23 were used as evaluation tools to assess the predicted models of RTN4, MAG, and OMG. Preferential and outlier regions of the expected models were identified in the Ramachandran plot. 20 Structure estimation, sequence analysis, and comparative proteomics analysis were performed on a workstation from Korean company Swiss Modeller19 and Phyre2 were used to model the structure24 (Figure-1). 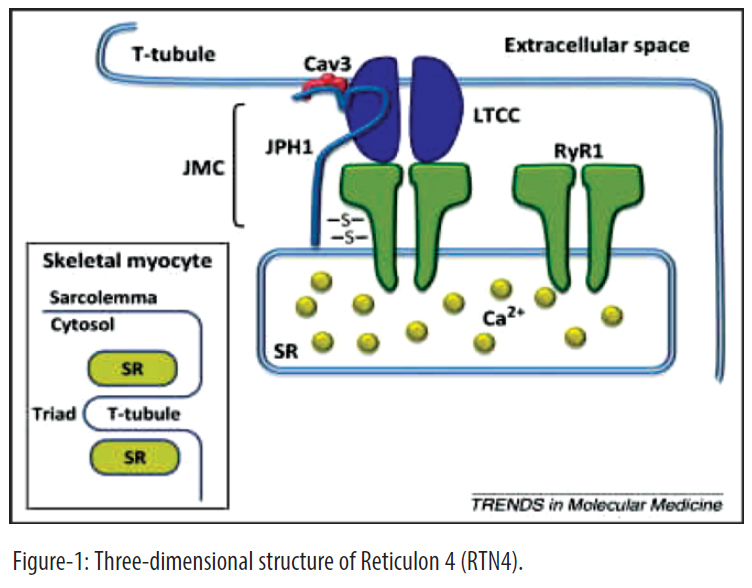 Ramachandran outliers and rotamers were removed by utilising the WinCoot tool25 (Figure-2). 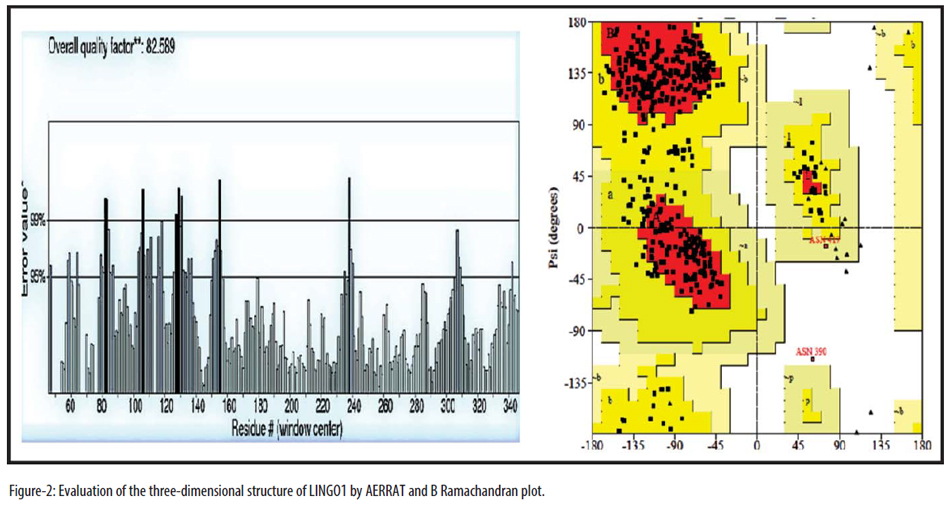 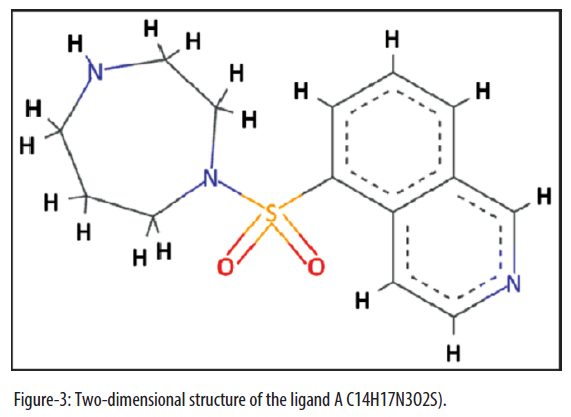 For docking exploration, Protein Data Bank (PDB) coordinates of the protein were enhanced by ligplot tool. 27 These coordinates had smallest amount of energy and stable conformation. 23 The chemical structures were estimated to behave like potent drugs subjected to Lipinski's rule of five and for oral bioavailability 28 Distribution, metabolism, secretion, and toxicity of the compound were analyzed using admet SAR online server. 29 Docking analysis was completed by Patch Docktool, and peak compound of gene with least bindingenergies were selected for further investigation. 30 After written informed consent, whole blood samples were collected from all the family members. Total deoxyribonucleic acid (DNA) was extracted from whole blood using QIAampQIAamp DNA Mini Kit (Qiagen, Hilden, Germany). The analysis of RTN4 gene was performed by Whole exome sequencing (WES). Approval for the studywas obtained from the institutional review board of Department of Biology, Kongju National University.

The ligand expressed the interactions with amino acid at location of LEU133, ILE134, Pro135, LEU136, ILE155,ILE157, LEU158, ASP160, and TYR16. These are the conserved residues and also find in the favored region. To grasp the better interactions between ligand and amino acid residues, a plot of amino acid-ligand interactions was produced using Ligplot Variation (Figure-4). 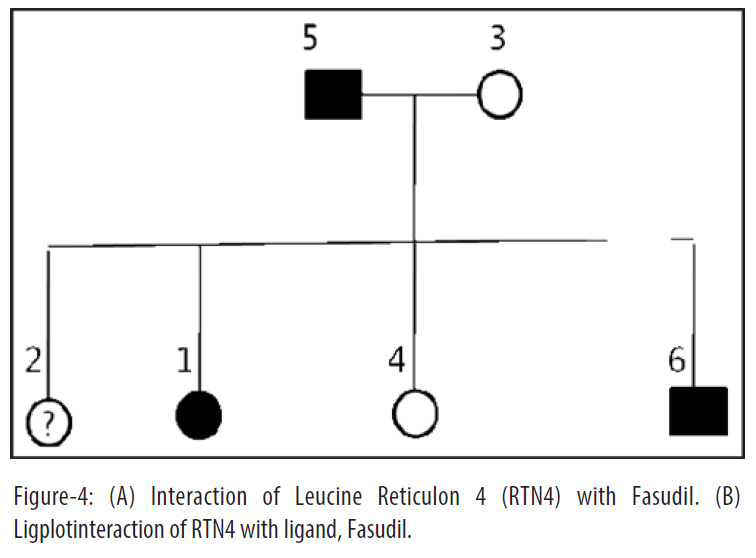 The proband was suffering from CMT type 1 but with complex phenotype. Initially, all causative genes responsible for the CMT disease wee sequenced by applying the sanger sequencing31 (Figure-5A).

Peripheral Myelin protein PMP22 duplication/deletion, Mitofusin (MFN2), and Gap junction beta-1 protein (GJB1) were expelled in all patients. Single nucleotide polymorphism (SNP) was also confirmed from 1000 genome browse (Figure-5B). Amissense alteration was found in exon 2 of RTN4 gene in the proband, and later the whole family was analysed. The missense mutation was not pathogenic and it was also found in the healthy family members. The association of SNP with CMT type 1 was not fully established.

The current study attempted to find the possibility of association of RTN4 gene in developing CMT type 1, demyelinating form. The gene is already involved in MS disease and is a therapeutic target by silencing the effect. In various studies 8,32,33 it has already been used as a drug target so bioinformatics analysis was applied in the current study. Till not too long ago, the renewal of the injured mammalian CNS was an almost impossible task. However the latest developments have led to treatment options tosome extent for the recovery of the damaged brain cells in animal models. Such discoveries have opened horizons for treatment options for humans. 34 Peripheral nerve injury is common, especially among young individuals. Although the injured neurons have the ability to regenerate, the rate is slow and functional outcomes are often poor. Several potential therapeutic agents have shown considerable promise for improving the survival and regenerative capacity of the injured neurons. 35  Various laboratory studies and some in vivo studies on mice suggest that synchronized reluctance of three myelin inhibitors could help improve recovery after spinal cord injury (SCI). 7  The regeneration capability of axons in CNS cannot, however, be accomplished in the presence of some inhibitory factors like RTN4, MAG, and OMG. In some studies, the effect of deleting these three proteins was little bit satisfactory, but there are also some more factors involved in the regeneration phenomenon. 12  However, the current study found the residues which are more compatible with the drug to inhibit the Rho-Rock pathway responsible for axonal regeneration. By using these ligands, at least some drugs can be selected for axonal regeneration in the peripheral nervous system (PNS). However, more studies are required to check its efficacy for axonopathies. RTN4 is involved in both demyelinating diseases and axonopathies by limiting the growth of axon regeneration. However, in the current study, the SNP was not pathogenic in the context of CMT. But this can be involved as a genetic modifier for some other diseases as well as for CMT disease. It is well-established fact the Nogois a major regeneration inhibitor. 36  We tried to find the interaction between Fasudil and Nogoby docking analysis. Fasudil is also reported in the literature as a potential inhibitor for Nogo expression. By decreasing the expression of RTN4, one of the four inhibitors for damaged axonal regeneration, it may facilitate for further trials on the drug. Some other inhibitors of RTN4 are also in the trial to check their interaction at invivo level. 28  So by controlling the expression of RTN4 and other inhibitors, the environment inside the CNS will be much healthy for re-growth of the damaged nerve cells.36 Myelin-associated inhibitors, which have up-regulated task in tissues affected by acute focal infarction, bound axonal regeneration via an opening of the Rho-Rho-associated protein kinase (ROCK) pathway. However, the ROCK inhibitor Fasudil promotes motor recovery after acute ischaemic stroke. 37  According to various studies, Fasudil has the potential to recover the injured neuron in CNS. A few studies found that Fasudil plays an important role in controlling the activity of growth inhibitors as it shows maximum affinity with the latter.8 However, a lot of work needs to be done to find the exact affinity at the laboratory level as so many pathways are involved that cannot be explained at the in-silico level. Furthermore, the blood-brain barrier is also a key phenomenon to find the actual effect of the drug on damaged nerves. This situation is created by some of the molecules that are responsible due to their inhibitory response. Nogo, MAG, OMG and RTN4 molecules inhibit the regeneration of the damaged nerves. 39  However, there is a possibility to control the expression of these molecules either by inhibition by some drugs or by using damage-repairing effect by some drugs. We applied some bioinformatics tools in this regard and the results were satisfying. However, such results have to be first applied in laboratories to get authentic results. Due to the presence of regeneration inhibitors in CNS, it becomes hard for the nerve cell to sprout again. To control such situations, there can be two ways to regenerate the neurons; one, provide them stress-free environment; and, two, control the activity of the inhibitors. 40

RTN4gene was not found to be involved in causing CMT disease type 1.

Source of Funding: The Korean project BK21 was the funding source for molecular analysis.

Neutralization of Nogo-A enhances synaptic plasticity in the