Life experiences of adolescents with cancer in Turkey: a phenomenological study

Objective: To explore life experiences of adolescents after cancer diagnosis.

Method: The phenomenological qualitative study was conducted at the paediatric oncology clinic of a university hospital in Edirne, Turkey, from March 15 to April 1, 2016, and comprised semi-structured interviews with adolescents aged 10-18 years diagnosed with different types of cancer. Data was analysed using Colaizzi's method.

Results: Of the 12 adolescents, 7(58.3%) were boys and 5(41.7%) were girls. The overall mean age was 14.92}2.19. Mean duration of life post-diagnosis was 2.87}2.94 years (range: 1-11 years), and all (100%) of them had undergone chemotherapy. More adolescents experienced shock, sadness, fear, anxiety, curiosity and uncertainty when they learned their diagnosis. Changes related to family included missing their siblings and parents, and feelings of guilt, anger, and sibling jealousy. Adolescents stated that they missed their schools and friends, feared stigmatisation, abandonment and changes related to future. They wanted a stress-free life, to have an occupation, to continue school, and to be independent.
Conclusion: Cancer changed adolescents' relationships with family and peers, and their feelings and thoughts regarding future. It is important that health professionals, especially nurses, recognise and understand such changes to provide quality care.

Cancer, which is a chronic disease, is one of the most serious health problems in many regions around the world.1-3 Cancer causes many physical, psychological and social changes. Age is one of the most important variables affecting the diagnosis and treatment of cancer.4 While the cancer process results in fewer reactions during infancy and childhood, it becomes harder in adolescence. 2,5,6 Being diagnosed with cancer during adolescence can result in still greater stress. In adolescents, cancer can be perceived as causing a distortion in body image, resulting in rejection by peers7,8 loss of independence, disruption in friendships, relationships, having effects on sexual maturation, and disruption of plans for the future.6,9-11 All these factors result in increased stress, anxiety, and depression in adolescents.12 Adolescents have different reactions to cancer and its treatment. While some accept the situation, other adolescents display rebellious and dangerous behaviours in order to prove their independence. 6,9,13,14 As such, it is very important to make it possible for adolescents who receive a diagnosis of cancer to express their feelings and concerns, to increase their capacity for coping with stress, to help them, and to increase their general ability to adapt to the disease.6,9,15,16 Cancer may affect a wide range of adolescent's life domains. 17Studies have highlighted that adolescent's experiences and outcomes are very different about cancer. 18 Walker et al. stated that adolescents face individual and social challenges during cancer treatment. 6 The negative and positive effects of being diagnosed with cancer are not known in adolescents. 18 In literature, it is reported that adolescents are not understood by health professionals and they need to be supported during treatment.19,20 It is also very important that health professionals, especially nurses who spend the most time with patients, should meet adolescents' needs.10,19,21 In order to achieve this, nurses should know life changes of adolescents with cancer.6,15 To increase adolescents life quality, more studies are needed. 9 With this goal, several researchers have suggested that there should be more qualitative studies involving cancer patients.6,9,15 An examination of literature shows that there are few studies on understanding the changes in adolescents' life after cancer diagnosis and such a study is very much needed in Turkey. 16 The current study was planned to fill the gap in order to help health professionals, especially nurses, to understand the life experiences of adolescents after cancer diagnosis.

The phenomenological qualitative study was conducted at the paediatric oncology clinic of a university hospital in Edirne, Turkey, from March 15 to April 1, 2016. After obtaining permission from the Trakya University School of Medicine scientific ethics board and the Chief Physician's Office, the sample was raised using snowball sampling which is a technique generally used where potential participants are hard to find. 22 Prior to the study, 45 adolescents were listed in the paediatric oncology clinic and all of them met the inclusion criteria which had nine items: they had to have the cancer diagnosis at least a month ago; had stable general condition; had to be literate; aged between 10-18 years; open to communication; could speak and read Turkish; had to be physically able to participate in the interview; had no audio-visual problems; and had to be willing to participate. It was thought that it would be difficult to analyse data from all those who met the criteria, and, as such, snowball sampling technique was used, and it was applied until data saturation was achieved. Socio-demographic characteristics of the adolescents were noted using a survey form which was in Turkish language. A semi-structured interview form was developed in thelight of literature. 6,8,10,12,1517 It consisted of questions on four themes, namely: 'What did you feel when you first learnt about your diagnosis?', 'What has changed in your family relations?', 'What has changed in your friendship relations?' and 'Did your thoughts regarding the future change?; These questions were pretested with three adolescents to ensure the questions were understandable and answerable. On the basis of pretesting, the interview form was revised where needed. Data was collected in a quiet interview room located in the paediatric oncology section where the adolescents could easily express themselves, voice recordings could be made, and distracting stimuli were eliminated. The semi-structured interview took 30-60 minutes until data saturation was achieved. The interviews' language was Turkish. In the interviews, both a voice-recording device and notekeeping were used. At least three researchers were assigned to each interview. The first researcher managed the interview. The second observed, posed additional questions for explanation when necessary, and took notes on important subjects (e.g. facial expression, voice tone, gestures). Thus, possible data losses were prevented and data was adapted to the research questions. The third researcher recorded the interviews against the initials of each participant, controlled the voice-recording device during the interviews, and thus prevented data-loss. In order to avoid data-loss, the manuscripts were translated from Turkish to English. Then the English-language revision of manuscript was done by a native speaker, and the authors checked all the manuscripts about meaning and grammar at the end of the editing phase. Data was analysed using Colaizzi's phenomenological method which helped to determine adolescent's life experiences. 23 The interviews were listened to repeatedly to gain a general sense and understand the life experiences of the adolescents. Theywere scripted with Microsoft Word and important situations and explanations were included. The authors followed the Colaizzi's steps for phenomenological data analysis for identifying and grouping themes with similar characteristics (Table-1).

At the end of the Colaizzi's process, each researcher formed detailed explanations and definitions regarding the subject which were consolidated and sub-themes were determined. Codes and any discrepancies were discussed before consensus on emerging themes was achieved. To increase the reliability and to verify the results, a specialist working in the same paediatric oncology clinic was consulted. All of the interviews were heard by the specialist and he was requested to formulate themes. After all these procedures, the emerging themes were discussed with a child psychiatrist until a final consensus was reached. When the themes and subthemes were finalised, the adolescents were invited to comment on the study's result and the themes/subthemes with the intention of approving the results. 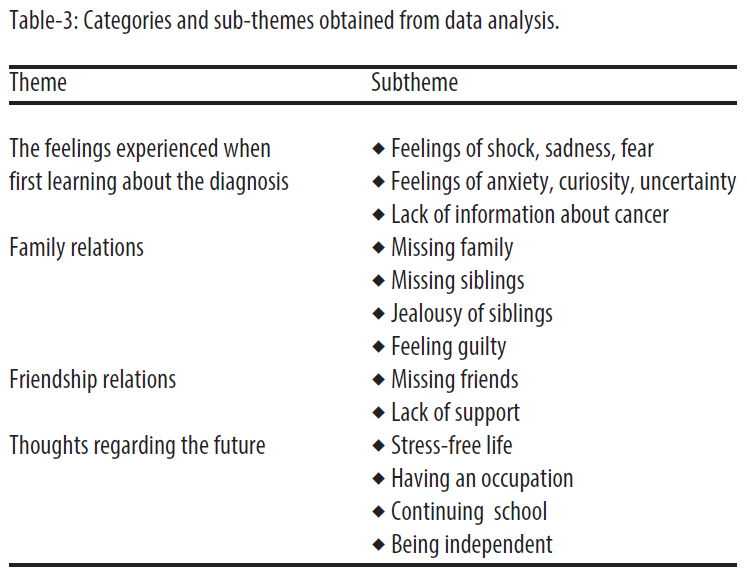 and examples of patient narratives according to the themes and their respective subthemes were collated (Table-4). 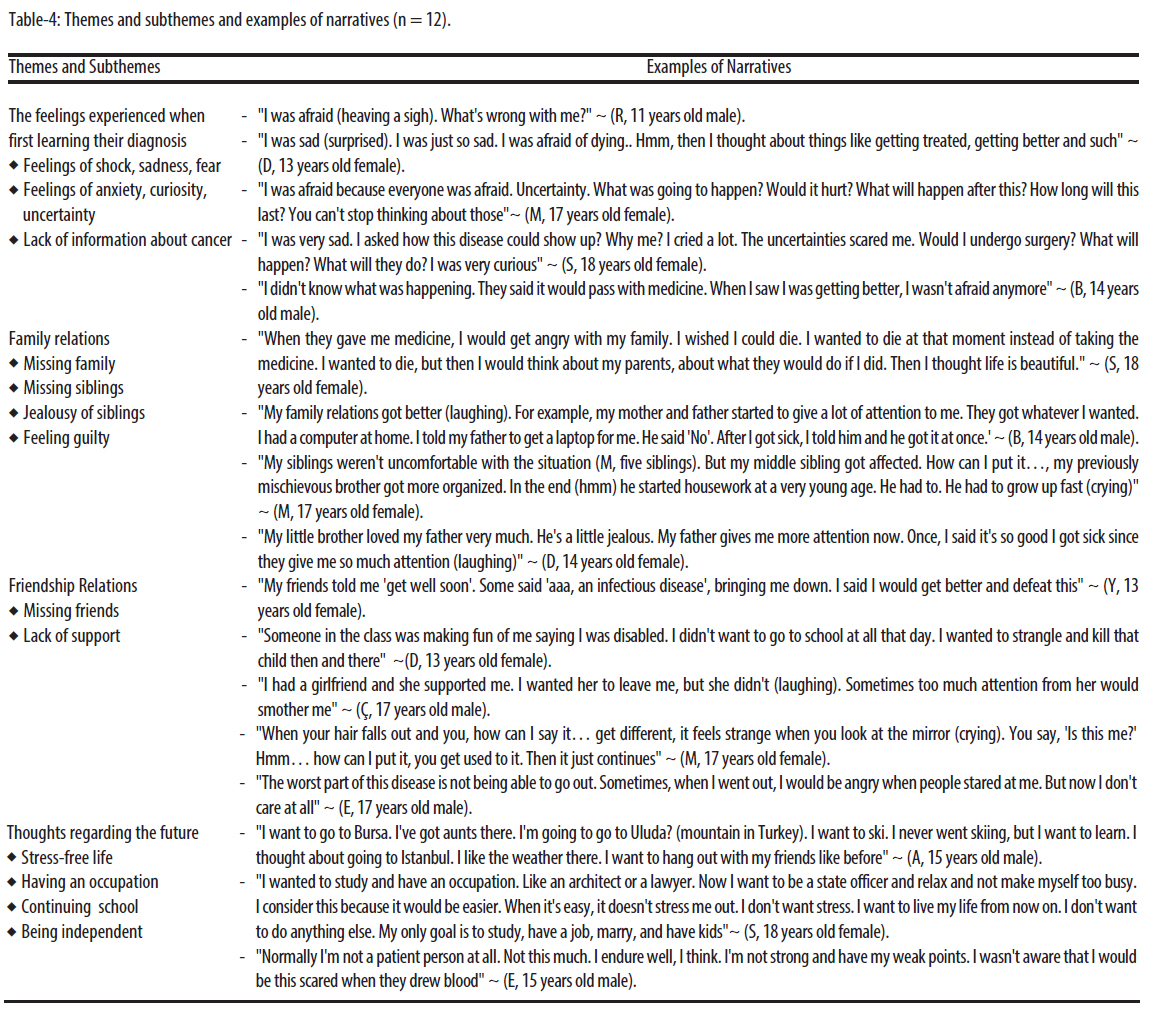 The first theme related to feelings experienced when first learning the diagnosis. It had three subthemes: 'feelings of shock, sadness, fear', 'feelings of anxiety, curiosity, uncertainty', and 'lack of information about cancer'. More adolescents learned their diagnosis from a doctor, but not immediately. They were informed about their disease after they were hospitalised. Most of them said they were not informed sufficiently about their diagnosis, because of which they felt shock, fear, anxiety and uncertainty. Most of them said that after the diagnosis, they wanted to be informed about their overall treatment procedure and they want to have a say in their treatment. The second theme was about family relations. It had four subthemes: 'missing family', 'missing siblings', 'jealousy of siblings', 'feeling guilty'. The adolescents said their families were more concerned about them than usual, that they were pleased with this attention, and that sometimes this excessive attention disturbed them. Some adolescents stated that they missed their siblings, that their siblings were jealous of the attention that was given to them, and that they felt guilty because of this. The third theme was about friendship relations. It had two subthemes: 'missing friends' and 'lack of support'. Some adolescents said they could not see their friends at all because of their illness and that they missed their friends very much. All the adolescents said they understood the value of school and of their friends better while going through their illness. Most of the adolescents said their friends helped them throughout the illness process, although some had negative attitudes. Most of the adolescents stated that the loss of hair and having to wear a mask made them sad and that they were negatively affected by the reactions of other people. The final theme was about thoughts regarding the future. It had four subthemes: 'stress-free life', 'having an occupation', 'continuing school', 'being independent'. The adolescents felt that the experiences they had during their illness process had given them a chance to really get to know themselves, and they generally perceived themselves as resilient, hopeful, patient and stubborn. Most adolescents stated that getting a cancer diagnosis had given them positive experiences in addition to their negative experience.

Cancer changed adolescents' relationships with family and peers, and their feelings and thoughts regarding future. It is important for the health professionals working with adolescents, and especially for nurses, to know what difficulties they may face in their care of these adolescents and to have realistic aims in the care process. For this to happen, the nurses must first understand the adolescents and their life changes.

Disclaimer: The study was presented as an oral presentation at the XX International Nursing Research Conference, Coruna, Spain, November 15-18, 2016.
Conflict of Interest: None.
Source of Funding: None.

et al. Positive and negative psychosocial impact of being diagnosed with cancer as an adolescent or young adult. Cancer. 2012; 118:5155-62.

23. Sanders C. Application of Colaizzi’s method: Interpretation of an