Methods: The comparative cross-sectional study was conducted in special education schools of Lahore and Islamabad from August 2017 to January 2018, and comprised children of either gender aged 5-18 years diagnosed with spastic cerebral palsy who were able to make a gross grip. Wood and Teuber criteria for the assessment of mirror movements and Jebsen-Taylor hand function test for hand function assessment were used, while manual ability classification system was used for the assessment of functional independence. Data was analysed using SPSS 21.

Conclusion: Mirror movement was found in one third of the sample, and there was no difference in hand function in children with and without mirror movements.
Keywords: Jebsen Taylor Hand Function, MACS, Movement disorder. (JPMA 69: 1459; 2019).doi:10.5455/JPMA.299044

Cerebral palsy (CP) describes a group of permanent disorders of the development of movement and posture, causing activity limitations that are attributed to nonprogressive disturbances that occurred in the developing foetal or infant brain. The motor disorders of CP are often accompanied by disturbances of sensation, perception, cognition, communication, and behaviour.1 The brain damage is caused by cerebral injury or strange advancement of the cerebrum which happens while a child's brain is developing, before birth, during birth and immediately after birth. CP influences body developments, muscle control, muscle co-appointment, tone of muscle, reflex, balance and coordination. 2 Signs and symptoms appear in mid-outset or pre-school years. CP causes weakened development related with strange reflexes, floppiness or unbending nature of the appendages and trunk, anomalous stance, automatic developments, temperamental strolling, or some mix of these conditions. Additionally, epilepsy, visual deficiency or deafness might be present. 3 The most widely recognised symptoms include problems with development on one side of the body, stiff muscles, exaggerated or jerky reflexes, involuntary developments or tremors, lack of coordination and adjustment, drooling, problems gulping or sucking, difficulty with discourse (dysarthria) and seizures. 4 Spastic CP(SCP) is portrayed by increased muscle tone. Hypertonia is associated with SCP. 5 Non-spastic CP will display diminished or fluctuating muscle tone. 6 Mirror movements reflect development issue, and a condition in which deliberate developments of one side of the body are reflected by automatic developments of the opposite side. For instance, when an influenced singular makes a clench hand with the right hand, the left hand makes a comparable development. 7 The mirror developments in this issue principally include the upper limb, particularly the hands and the fingers. This example of development is available from early stages or earlyadolescence and typically perseveres all through life without other related signs and side-effects. Insight and life expectancy are not influenced. 8 Subsequently, development signals from 50% of the cerebrum are unusually transmitted to the two sides of the body, prompting mirror developments. The degree of the mirror developments in this issue can change even inside a similar family. 9 Much of the time, the automaticdevelopments are recognisable but less articulated than the related deliberate developments. The degree of the developments ordinarily remain the same all through the lifetime of an affected person. 10 To the best of our knowledge and literature search, there is no published study from Pakistan on the frequency of mirror movements in SCP children. Also, no study could be located on comparison of unimanual hand function in children with and without mirror movement. Most of the paediatricians as well as several rehabilitation specialists in Pakistan are unaware of this movement disorder and often confuse it with associated movements. The current study was planned to assess the frequency of mirror movements in SCP children, and to compare the hand function and functional independence of such children with and without mirror movements.

The comparative cross-sectional study was conducted at special education schools of Lahore and Islamabad, Pakistan, from August 2017 to January 2018, and comprised all types of SCP (hemiplegic, diplegic and quadriplegic) children of either gender aged 5-18 years who were able to make a gross grip. Those excluded were low-tone CP children, those not able to follow the command and children with fixed deformity making assessment difficult.The Sample size was calculated using World Health Organisation (WHO) sample size calculator 11 with anticipated population of 0.01. 12 Non-probability purposive sampling technique was used. Permission was taken from the directors of the schools concerned.To measure mirror movements, Woods and Teuber criteria was used that consists of three tasks (fist opening and clenching, finger opposition and finger tapping) and five grades; grade 0 (no clear mirror movement), grade 1 (barely discernable repetitive movement), grade 2 (showing slight mirror movement or stronger short time), grade 3 (stronger and sustained repetitive mirror movement), and grade 4(mirror movement equal to opposite hand). Intra-class correlation coefficient (ICC) of mirror movement scoring was reported to be greater than 0.82.13,14 Each task was done with the participant sitting comfortably with elbows and forearm supported on the table. Videotaping was done for all the children while performing tasks in order to make sure the presence or absence of mirror movements. To check the functional independence, manual ability classification system was used that is a valid tool (ICC=0.97), 15 consisting of five levels; level I (handle objects easily and successfully), level II(reduced quality and somewhat reduced speed of achievement), level III (help to prepare or modify activity), level IV(limited selection of easily managed objects in adapted situations), level V(does not hold any object). 12 To compare the hand function, Jebsen Taylor hand function test (JTHFT), a valid tool for the assessment of unimanual task performance, was used. It consists of writing, simulated page turning, feeding, stacking checkers, picking up small objects, lifting large light objects and lifting large heavy objects. 14 About 15-20 minutes were spent on one individual for data collection. Well-trained physical therapists collected data under the supervision of the class teacher of each student in a separate place especially designed in the exercise room according to the standard requirements of different tools used in the study. Data was analysed using SPSS 21. Descriptive statistics were presented in the form of Mean}standard deviation (SD) along with frequencies and percentages. For comparison between the groups Mann Whitney U test was applied after checking the normality of the data by Kolomogorov Smirnov test (p<0.05). Chi Square was applied for comparisons of Manual Ability Classification System (MACS) scale between the groups. 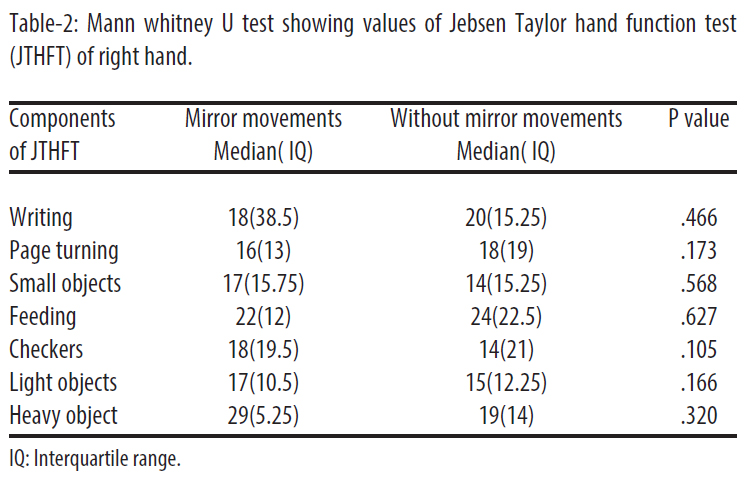 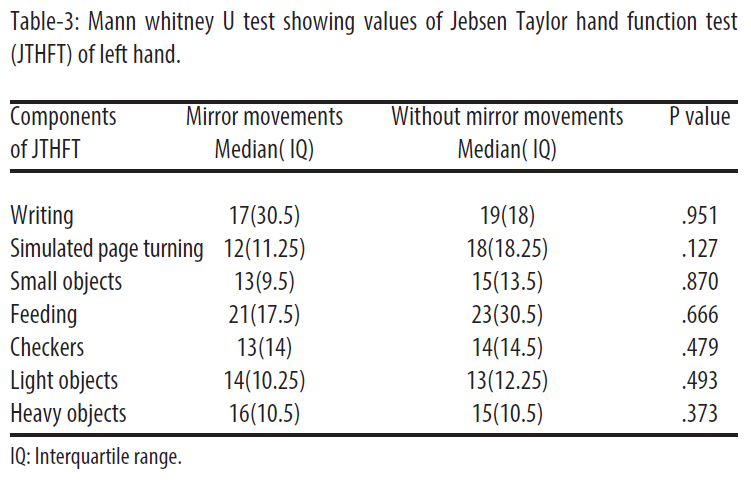 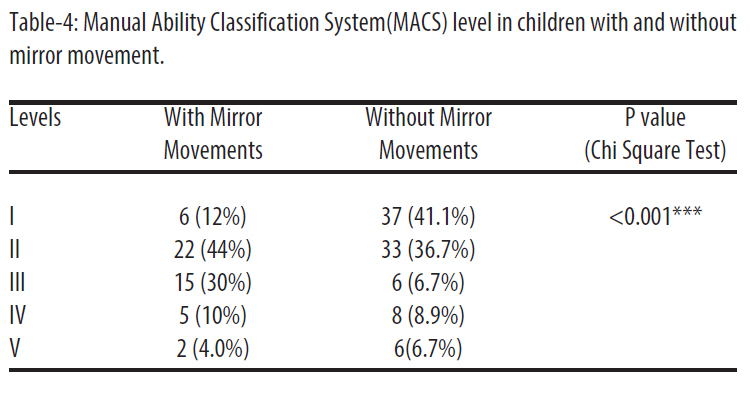