Objective: To investigate the effects of thyroidism on the development of contrast-induced nephropathy in patients undergoing coronary angiography and percutaneous coronary intervention.
Methods: The prospective, observational study was conducted at Trakya University Faculty of Medicine, Edirne, Turkey, from October 1, 2016, to October 1, 201 7, and comprised patients with hypothyroidism, hyperthyroidism and euthyroid patients. Thyroid and renal functions were evaluated from blood samples taken before the procedure. The definition of contrast-induced nephropathy included absolute (0.5 mg/dL) or relative increase (25%) in serum creatinine 48-72 h after exposure to a contrast agent compared with baseline serum creatinine values. SPSS 10 was used for data analysis.

Thyroid hormones affect sodium and water homeostasis and glomerular filtration rate (GFR) along with the development, structure, physiology, haemodynamics and nephron transport system of the kidney. 1 They can directly affect renal functions, and also indirectly through cardiovascular, metabolic, and systemic haemodynamic changes. 2 In hypothyroid cases, renal blood flow, GFR and pressure are reduced, tubuloglomerular feedback (TGF) decreases and renal physiology deteriorates.2-4 In hyperthyroidism, renal blood flow, GFR and pressure increase, TGF becomes more sensitive and renal physiology changes.3,4 In addition, in hyperthyroid cases, increased intraglomerular filtration pressure, oxidative stress due to increased metabolic activity and loss of renal medullary function affect the normal functioning of the kidneys.2-4 Therefore, thyroid dysfunctions frequently seen in the clinic lead to significant changes in kidney function. 2Coronary angiography (CAG) and percutaneous coronary interventions (PCIs) are frequently used in diagnosis and treatment of coronary artery disease in cardiology. The iodinated contrast materials used during these procedures can lead to the development of contrastinduced nephropathy (CIN). While high osmolarity of contrast media disrupts the TGF function in the kidneys, direct renal medullary toxicity causes acute renal failure. 5 CIN is the third most leading cause of acute renal failure in the hospital setting. 6 CIN incidence is reported between 2-50% in several studies. 7-9Advanced age, diabetes mellitus, congestive heart failure, haemodynamic instability and use of hyperosmolar contrast agents have been shown as risk factors for the development of CIN.8,10-12 However, no study has investigated the effect of thyroid function on CIN development. The current study was planned to investigate the effects of hyperthyroidism and hypothyroidism on the development of CIN in patients undergoing CAG or PCI.

The prospective, observational study was conducted at Trakya University Faculty of Medicine, Edirne, Turkey, from October 1, 2016, to October 1, 2017, and comprised patients with hypothyroidism, hyperthyroidism and euthyroid patients. After permission from the institutional ethics committee, all patients who underwent CAG and/or elective PCI in Department of Cardiology were examined. Thyroid function tests were performed in patients who were symptomatically suspected of thyroid dysfunction after a thorough patient consultation and physical examination. Written informed consent was obtained from all patients before getting them enrolled for the study. Those excluded had acute coronary syndrome, preoperative basal creatinine level >1.5mg/dL, chronic renal failure, and chronic systemic disease. Baseline clinical and laboratory findings of the patients were recorded. Serum creatinine levels in the blood samples of the patients were recorded prior to CAG or PCI and 48-72 h after the procedure. The laboratory findings were used to determine whether the patient developed CIN. Thyroid hormone levels were measured in the blood samples of the patients prior to CAG or PCI by chemical immunoassay method with Unicel DXI 600 (Beckman Coulter, USA). The left ventricular ejection fraction (LVEF) values in the apical 4-chamber view of all patients were recorded during preoperative echocardiographic examinations with the modified Simpson's method (Vivid7; GE Medical Systems, Horten, Norway). After baseline biochemical and echocardiographic examination, CAG was performed on patients with positive exercise stress test or myocardial perfusion scintigraphy or typical anginal symptoms. Elective PCI was performed on patients who had significant coronary stenosis (>70% stenosis) in CAG. The CAG and PCI procedures were performed by expert cardiologists using the standard technique via femoral/radial pathways. Non-ionic low osmolarity contrast media (Iohexol, Omnipaque, GE Healthcare, UK) was used in all procedures. For all patients, the administration of intravenous saline solution was started (the rate was 1 mL/kg/hr) 6-12 h before the procedure and continued 6-24 h after the procedure. The definition of CIN included absolute (0.5 mg/dL) or relative increase (25%) in serum creatinine compared with baseline serum values, 48-72 h after exposure to the contrast agent. 13 Patients with hyperthyroidism, hypothyroidism and euthyroidism were determined by considering the limit values for thyroid hormone levels (TSH: 0.3-5.33 uIU/ml, free tri-iodothyronine (FT3): 1.4-5 pg/ml, free thyroxine (FT4): 0.6-1.62 ng/dl). Patients with low TSH levels and high FT3 and FT4 levels were defined as evident hyperthyroidism, and those with low TSH levels and normal FT3 and FT4 levels were defined as subclinical hyperthyroidism. 14 Body mass index (BMI) was calculated as body weight (kg) divided by square of the height (m2). GFR was calculated using Cockcroft-Gault formula [(140 - age) × body weight (kg)]/[72 × serum creatinine] (if woman: × 0.85). 15 Patients whose systolic blood pressure (SBP) >140mmHg, or whose diastolic blood pressure (DBP was >90mmHg and patients who used anti-hypertensive medication were categorised as hypertensive. 16Patients were defined as diabetic if their fasting blood glucose (FBG) level was >126 mg/dL on two consecutive measurements or if they used oral antidiabetics / insulin. 17 Data was analysed using SPSS 10.0. Means } standard deviation (SD) was used for continuous variables, whereas frequencies and percentages were used for categorical variables. Baseline characteristics of the hypo- and hyperthyroid groups were compared with those of the euthyroid group. Variables between the groups were compared by Student's t-test for normally distributed values; otherwise, Mann-Whitney U test was applied. Categorical variables were compared either with Chi-square or Fisher's exact tests. Univariate and multivariate logistic regression analyses were also used to determine the predictors of CIN. P<0.05 was considered statistically significant. 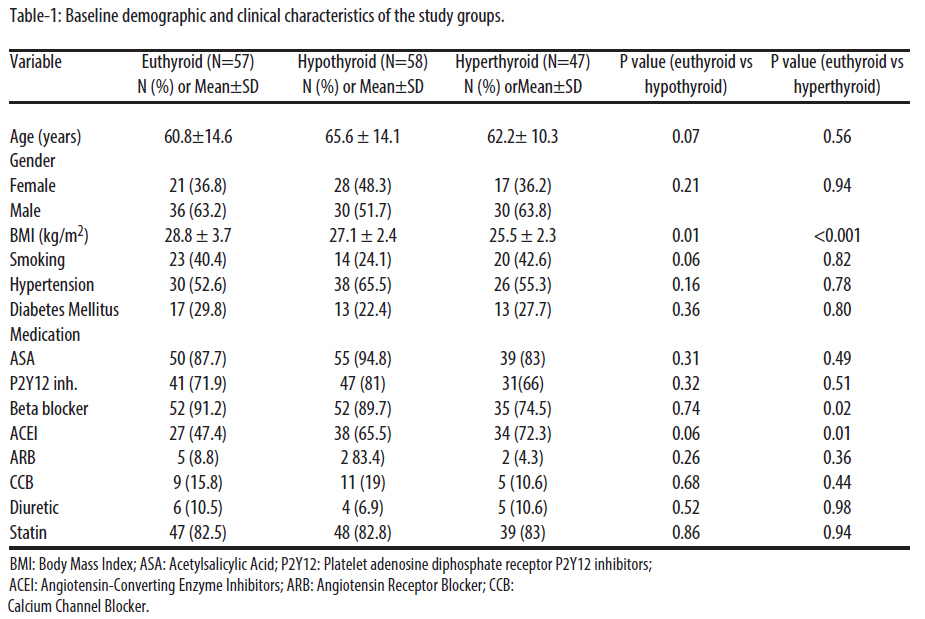 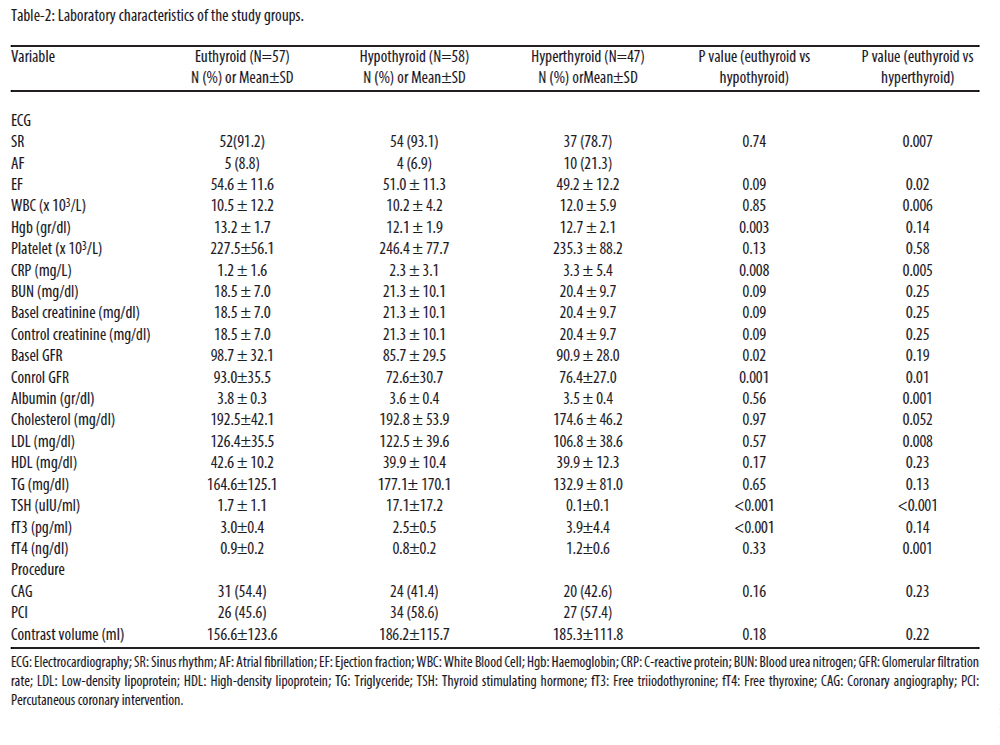 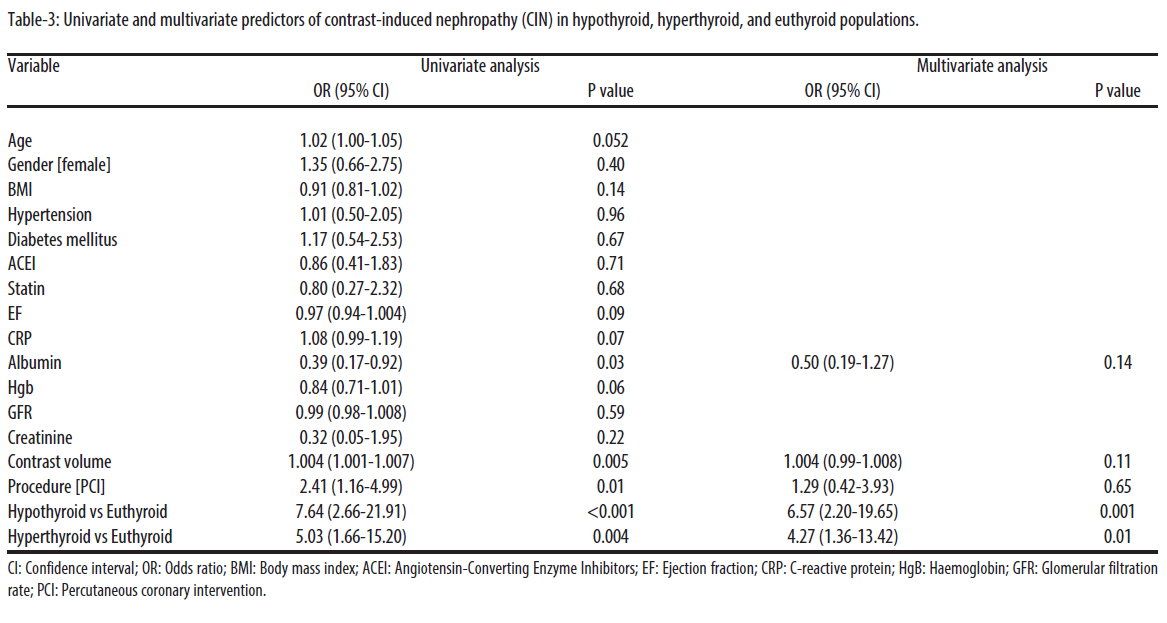 The current study examined the effect of hypothyroid and hyperthyroid status on CIN development in patients undergoing elective PCI and CAG. Hypothyroid and hyperthyroid states were independent predictors of CIN. The CIN rate was more frequent in hypothyroid and hyperthyroid patients than in the euthyroid group. CIN is an acute renal failure that develops after using intravenous (IV) contrast agents, which cannot be explained by any other reason. The use of contrast agents has increased due to increased cardiovascular interventions. CIN development is a highly complex process. Medullary ischaemia, metabolic changes due to renal glomerular haemodynamic changes, and the direct toxic effect of contrast agents on renal cells are the basis of pathophysiology. 18 Definitive risk factors, such as chronic renal failure, heart failure with low EF, cardiogenic shock, dehydration, presence of hypotension and excessive ionic high osmolar contrast agent use, have been identified for the development of CIN. However, no study has evaluated the effect of thyroid function on CIN development. The current study included all patients who underwent CAG and/or elective PCI with a suspected thyroid dysfunction over a period of one year. Changes in thyroid function cause structural and functional alterations in the kidneys. Hypothyroidism is characterised by decreases in renal blood flow, in the activity of renin-angiotensin system, in intraglomerular filtration pressure and in renal tubular mass.19,20 Consequently, GFR may decrease by up to 40% in hypothyroid patients. In the present study, GFR values were significantly lower in hypothyroid patients than in euthyroid ones. This regression in renal function posed a risk for the development of CIN in patients with hypothyroidism. Also, univariate and multivariate analyses indicated the presence of hypothyroidism as an independent risk factor for the development of CIN. Compared to the euthyroid status, OR was 6.47 for the risk of CIN development in the presence of hypothyroidism. In the presence of hyperthyroidism, an increase in renal blood flow results in intra-glomerular hypertension which causes hyperfiltration by increasing renal filtration pressure. Increased mitochondrial energy metabolism in hyperthyroidism causes down-regulation of superoxide dismutase enzyme, resulting in increased free radical formation and direct renal injury. 2,21,22 Oxidative stress also contributes to intraglomerular hypertension. Direct renal damage and hyperfiltrationlead to proteinuria.2,23 This results in a loss of renal function. Reduced renal function poses a risk for the development of CIN. In the present study, the levels of CRP, a marker of inflammatory response, were found to be significantly higher in both the hypothyroid and hyperthyroid groups. The albumin levels of the hyperthyroid group were also significantly lower than those of the euthyroid group. Both univariate and multivariate analyses showed the presence of hyperthyroidism as an independent risk factor for the development of CIN. The OR was 4.27 in hyperthyroid patients for CIN development compared to euthyroid patients. The incidence of CIN was higher in patients with evident hypothyroidism (46.4%) and hyperthyroidism (37.5%) patients than in patients with subclinical hypothyroidism (36.7%) and hyperthyroidism (33.3%). With these findings we can say that the severity of thyroid dysfunction increases the incidence of CIN. However, as the number of patients is limited, it is obvious that they need to be evaluated in larger patient groups. CIN occurs in 2-10% of the general population. However, it is reported in up to 50% of high-risk patient groups undergoing CAG and PCI. 24,25 According to a study among 7,586 patients who underwent PCI in Mayo Clinic, the incidence of CIN was 3.3%.26 In a smaller study that analyzed data on 1,826 patients undergoing PCI, CIN occurred in 14.5% cases. 27 In our study, there was 75 CAG patients and 87 elective PCI patients. In the present study, the incidence of CIN in the euthyroid, hyperthyroid, and hypothyroid patients was found to be 8.8%, 34%, and 41.4%, respectively. The CIN incidence in the euthyroid group was similar to that reported in literature. 28 The current study might provide guidance for the future investigations on the subject. The major limitation of the current study was the small sample size. However, as our department is a major centre for CAG and/or PCI, the sample might be reflective of the local population. Besides, another limitation is that laboratory markers of contrast nephropathy, such as neutrophil gelatinase-associated lipocalin (NGAL) and Cystatin C, in patients were not assessed. 29

CIN rate was increased in both hypothyroid and hyperthyroid patients. Hypothyroidism and hyperthyroidism were regarded as independent predictors of CIN. Large multicenter clinical trials are needed to investigate the predictive value.

3. van Hoek I, Daminet S. Interactions between thyroid and kidney function in pathological conditions of these organ systems: a review. Gen Comp Endocrinol. 2009; 160:205-15.