Objective: To determine decrease in respiratory distress and hospital stay in bronchiolitis patients with and without family history of atopy when treated with prednisolone.

Methods: The multi-centre quasi-experimental study was conducted in three hospitals of Sialkot, Pakistan, from October 2017 to March 2018, and comprised patients of bronchiolitis who were divided into 2 groups on the basis of presence or absence of family history of atopy. Half of the patients in each group received oral prednisolone 2mg/kg/day for three consecutive days along with supportive care, and the remaining half received only supportive care. Patients were monitored at 12 and 24 hours for clinical response using Modified Respiratory distress Assessment Instrument score. Length of hospital stay was monitored upto 72 hours. SPSS 20 was used for data analysis.

Conclusion: Oral prednisolone in bronchiolitis was found to be only effective in patients with family history of atopy.
Keywords: Bronchiolitis, Atopy, Infants, Steroid. (JPMA 69: 1448; 2019).doi:10.5455/JPMA.296296

Viral bronchiolitis is one of the major causes of lower respiratory tract infections (RTIs) in children, and usually occurs in those aged less than two years. It is a common illness all over the world responsible for high frequency of hospital admissions, particularly in infants.1 Severe acute RTI of lower airways is a huge burden on healthcare facilities leading not only to hospital admissions butsignificant referral to higher tertiary care centres. 2  Respiratory syncytial virus (RSV) is responsible for almost 80% admissions in hospitals as viral bronchiolitis. 3  Many studies have used the clinical definition of bronchiolitis as the first episode of wheezing in a child below 2 years of age following upper respiratory tract illness and no other identifiable cause of wheezing. 4  Various treatment options have been suggested for bronchiolitis, but no consensus has been reached so far. 5  Corticosteroids are used widely for the treatment of acute respiratory illness in children.6 It has been seen that patients suffering from RSV bronchiolitis develop recurrent wheezing episodes in later childhood. As there is clinical similarity of bronchiolitis with asthma, therefore corticosteroids might be a treatment option theoretically. The efficacy of corticosteroids in bronchiolitis has been studied previously, but the results are equivocal and corticosteroids are still being used by many doctors. 7  Acute viral bronchiolitis in the first year of life is a risk factor for asthma in children. It gains more significance when associated with a family history of asthma. 8  In infants with first episode of wheezing the use of oral steroids is controversial, but these are still being used in bronchiolitis in parental, oral or inhaled forms. 9  The current study was planned to assess the efficacy of prednisolone in bronchiolitis patients with and without family history of atopy.

The multi-centre quasi-experimental study was conducted from October, 2017 to March 2018 in thepaediatric departments of three hospitals in Sialkot, Pakistan; Allama Iqbal Memorial Teaching Hospital (AIMTH), Syed Medical Complex, and Saad Hospital. Bronchiolitis patients presenting in the paediatric outpatient and emergency departments of the three hospitals were enrolled using non-probability consecutive sampling technique after approval from the head of AIMTH and Khawaja Muhammad Safdar Medical College, Sialkot. Informed consent was taken from the parents. The sample size was calculated using online Open-Epi calculator 10  by taking success percentage of patients treated with prednisolone as 80.2% in relation to length of hospital stay, margin of error as 5.3% and confidence level of 95%.11  The patients were divided into two groups on the basis of presence or absence of family history of atopy. The clinical diagnosis of bronchiolitis was made on the basis of history of cough, breathing difficulty with fast breathing and auscultatory findings of ronchi following a viral upper respiratory catarrh. 12  Family history of atopy was considered to be present if any of the first-degree relatives (father, mother, siblings or grandparents) had history of either eczema, allergic rhinitis or asthma. Children with first episode of bronchiolitis aged 2-24 months and moderate scoring on Modified Respiratory Distress Assessment Instrument (mRDAI) score were included (Annexure).

Children who had history of wheezing or bronchiolitis, mild or severe mRDAI score, severe acute malnutrition (SAM), pneumonia, history of tuberculosis (TB), cystic fibrosis, immunodeficiency, chronic illness, genetic disease or syndrome, and history of treatment with prednisolone and/or bronchodilator were excluded. Chest X-Ray and complete blood count were done for all patients. In both atopic and non-atopic groups, every patient wasassigned a serial number; even-numbered patients were administered steroids, while odd-numbered patients were not given steroids. Oral prednisolone 2mg/kg/day was administered in two divided doses for 3 consecutive days along with supportive care, and the remaining cases received only supportive care which included nebulisation with salbutamol 0.1mg/kg with 2cc normal saline 6 hourly, nebulisation with normal saline 2cc 2 hourly and nutritional support in the shape of adequate usual caloric intake according to age of the patient. No patient required oxygen inhalation as patients included were of moderate mRDAI category. The same pattern was adopted in the non-atopic patients. The treatment was administered by on-duty nurses, while the monitoring was done by on-call doctors who were blind to the group divisions. The primary outcome was to assess clinical response within the first 24 hours of admission. As such, the mRDAI score of patients was monitored for response at 12 and 24 hours only. The treatment of patients whose mRDAI score fell to the mild category(0-4) in the first 24 hours was declared effective and they were discharged, whereas in those who continued to have higher mRDAI scores, the treatment was labelled ineffective. These ineffective patients were then only monitored for length of hospital stay for upto72 hours. Independent two sample 't test was used to determine the mean difference between atopy and non-atopy groups for age, weight and mRDAI scores separately as these variables were assessed as continuous. Categorical variables, such as gender, atopy type, outcomes and subgroups of hospital stay, were compared using Chisquare and independent 't' test between atopy and nonatopy groups. P<0.05 was considered significant. excluded due to non-compliant follow-up. The sample, as such, stood at 212(97.24%). Of them, 72(34%) were in the atopic group and 140(66%) in the non-atopic group. The overall mean age was 5.39}3.11 months (range: 2- 13 months). There were 118(55.7%) boys and 94(44.3%) girls. Difference in age or weight between the two groups was not significant (p=0.201 and p=0.725) (Table-1). 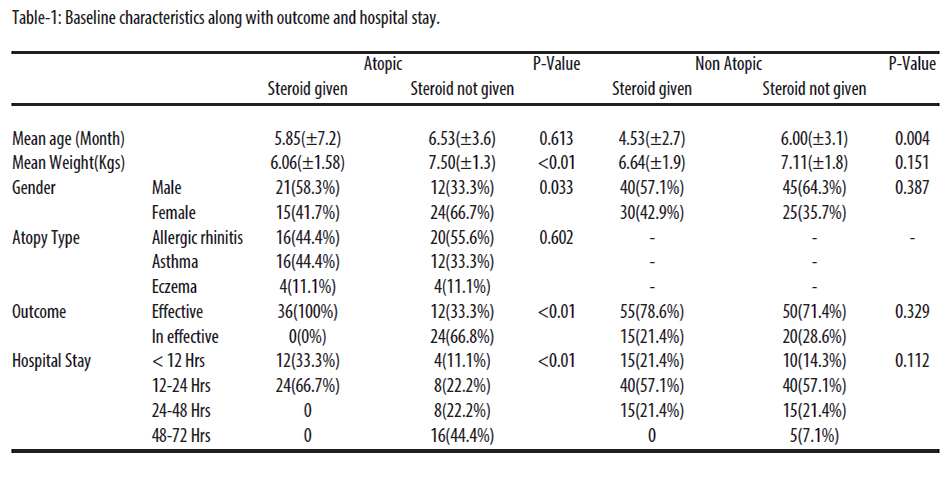 Significant difference in mean mRDAI score was observed between steroid and non-steroid subgroups in the atopic patients at 12 and 24 hours (p=0.001 and p=0.001). All (100%) patients in the steroid subgroup got discharged at 24 hours, while only 8(22%) were discharged in the non-steroid group (Table-2, Figure-2). 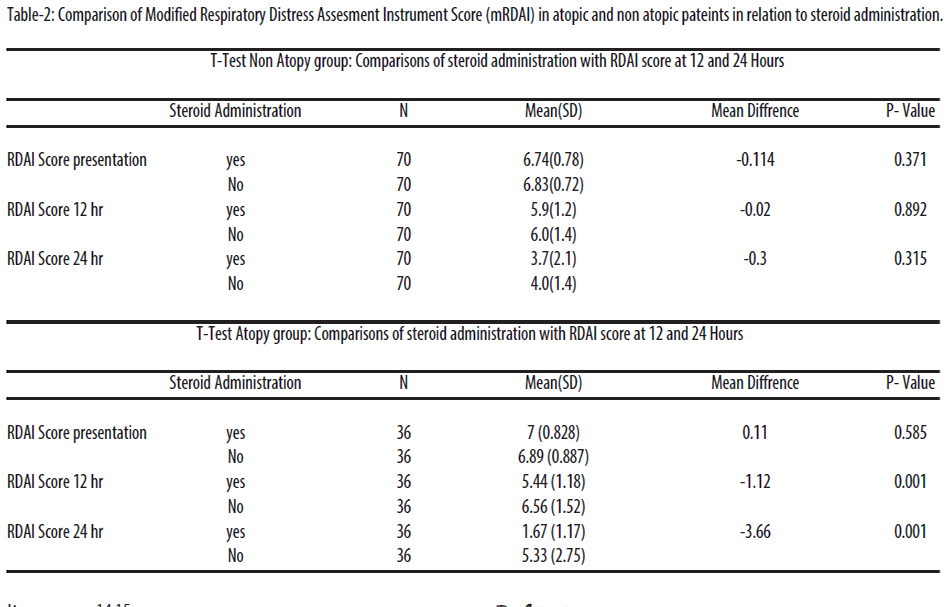 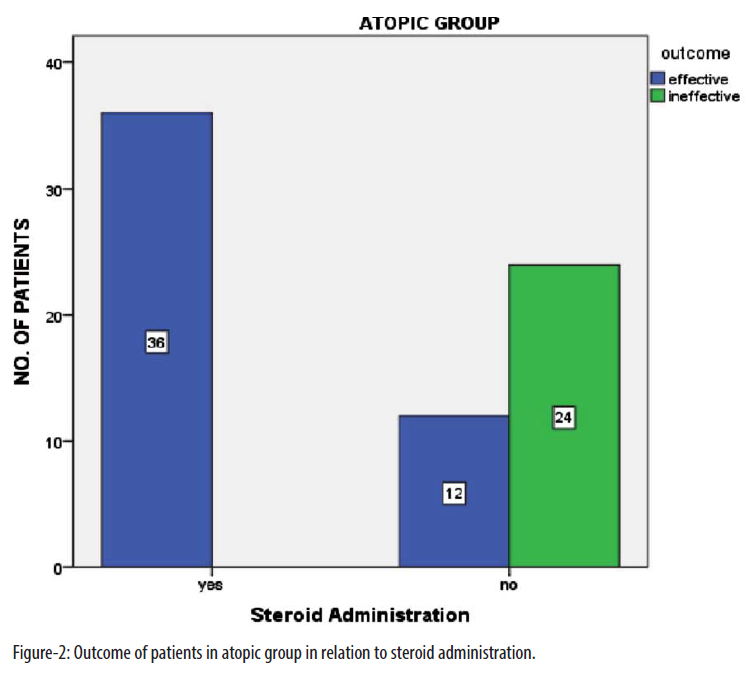 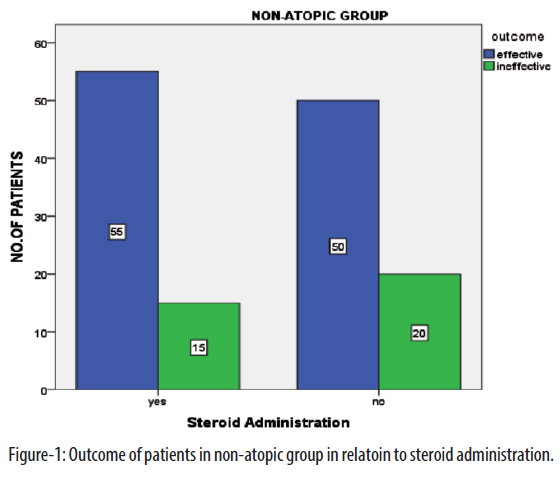 Bronchiolitis has been intensively studied in literature from various angles, including its management, and the mainstay of treatment remains primarily supportive. Role of corticosteroids in bronchiolitis has remained controversial. In the current study, males were predominant (55.7%) compared to females (44.3 %). Similar male predominance was also prominent in a study. 13  Mean age of the patients in the current study was 5.39}3.11 months and majority of them were aged upto 6 months. This result is similar to those reported in literature.14,15 In the atopic group, all the patients who received prednisolone were discharged within the first 24 hours of treatment, while only 22% patients who did not receive prednisolone were discharged in that time (Table-2). These results are in concurrence with earlier studies16-19 but one study found no significant difference in this regard.20 In the non-atopic group, there was no significant difference observed in hospital stay on the basis of steroid administration (Table-2). Similar findings were observed in England.21 The pattern of mean mRDAI scores from the tme of presentation to discharge was significant and in line with literature.11,17 However, larger multi-centre and multination randomised clinical trials are needed to provide more evidence in this regard.

The use of oral steroids had promising results in patients with bronchiolitis having family history of atopy as far as the duration of symptoms and hospital stay were concerned.

7. Beigelman A, Chipps BE, Bacharier LB. Update on the utility of corticosteroids in acute pediatric respiratory disorders. Allergy Asthma Proc. 2015; 36:332-8.