Objective: To explore the importance of serum carcinoembryonic antigen level as a tumour marker in rectal carcinoma.

Method: The retrospective study was conducted at Shaukat Khanum Memorial Cancer Hospital, Lahore, Pakistan, and comprised data of patients with rectal carcinoma from January 1996 to December 2015. Serum carcinoembryonic antigen levels were analysed using immulite@2000 system analyser. On the basis of serum carcinoembryonic antigen levels, data of patients was divided into four groups. Group A had normal serum levels both before and after surgical resection; Group B had normal levels pre-surgery but post-surgery levels were raised; Group C had raised levels pre-surgery that went down to normal post-surgery; and Group D had raised levels both before and after surgery. SPSS 23 was used for data analysis.
Results: Of the 401 patients, 267(66.6%) were males, and 204(50.9%) were aged <50 years. Group A had 267(66.6%) patients, Group B 26(6.5%), Group C 79(`9.7) and Group D had 29(7.2%) patients. Stage III disease was the most common 343(85.5%) and it was true across the groups. Overall recurrence was in 141(35.2%) patients. Group D had the highest recurrence rate 26(89.7%), while Group C had the lowest 18(22.8%).

Rectal carcinoma is one of the common health problems and has serious associated morbidities and mortality issues.1 The degree of penetration of the primary lesion (T stage) and nodal status (N stage) provide a gross overview of tumour stage and possible disease prognosis and relapse of tumour after primary surgery. However, different patients with the same tumour-node-metastasis (TNM) staging behave differently in terms of disease prognosis and relapse. 2  So identification of risk factors for tumour prognosis and relapse is a challenging domain. For this reason it is advisable to check pre-operative parameters other than TNM staging to identify the factors that are responsible for tumour recurrence after curative primary resection of the rectal cancer.3,4 One of the most commonly used tumour markers for colorectal carcinoma is serum carcinoembryonic antigen (CEA). Serum CEA has high expression in adenocarcinoma, it is an easily available, and is a costeffective test. That is why it is the most commonly used tumour marker for surveillance and assessment of disease relapse in rectal cancer patients. 5  Raised pre-operative serum CEA levels have been associated with advanced tumour stage, poor tumour response to neo-adjuvant chemo-radiotherapy and increased risk of recurrence after curative primary resection. 6  It has also been shown in previous studies that raised post-operative serum CEA level has prognostic significance for rectal cancer in terms of disease relapse. 7  Simultaneous evaluation of pre- and post-operative serum CEA levels to have any prognostic significance in rectal cancer is seldom assessed. The current study was planned to explore the importance of serum CEA levels as a tumour marker in predicting clinical outcome, tumour prognosis, tumour relapse, disease-free survival (DFS) and overall survival (OS) for patients with rectal carcinoma.

The retrospective study was conducted at Shaukat Khanum Memorial Cancer Hospital (SKMC), Lahore, Pakistan, and comprised data of patients with rectal carcinoma who had presented to the Surgical Oncology Department from January 2006 to December 2015. Data of all patients with rectal cancer who had undergone curative surgical resection and in whom serum CEA samplings was performed using IMMULITE@2000 systems Analyzer in pre- and post-operative period was included. Data related to patients with more than one primary cancer and those with missing serum CEA levels was excluded. Staging work-up included full colonoscopy, contrast-enhanced computed tomography (CT) scan of thorax and abdomen, and magnetic resonance imaging (MRI) of pelvis. This had been done in all cases mainly to exclude patients having advanced cancer with distant metastasis. After approval was taken from the institutional review board, clinical data of all patients, including age, gender, clinical presentation, clinical and pathological TNM classification, pre- and post-operative CEA levels at follow-up, histopathological findings, tumour recurrence, DFS and OS, was collected from patient's records. Serum CEA levels had been monitored for a period of one year from the date of primary tumour resection surgery. Depending upon the serum CEA levels in pre- and postoperative period, data of all patients in the study was categorised into four groups. Group A patients had normal serum CEA levels both before and after surgical resection of primary tumour. Group B comprised patients with normal serum CEA levels before surgery while after surgery, serum CEA levels were raised. Group C comprised patients with raised serum CEA levels before surgery which came down to normal after resection of primary tumour. Group D comprised patients with raised serum CEA levels in both before and after the surgery. Serum CEA level of 4.6 was taken as the cut-off upper limit, with levels >4.6 considered to be raised. Data analysis was done using SPSS 23. Mean +/- standard deviation (SD) was used for continuous variables, while frequencies and percentages were used for categorical variables, like recurrence / pre-operative CEA levels / OS etc. Categorical variables were compared using Chi square test or Fisher's exact test when necessary. To estimate survival, Kaplan Meier method was applied, while Log rank test was used for the analysis of survival difference. Statistical significance was defined as twotailed p=0.05. 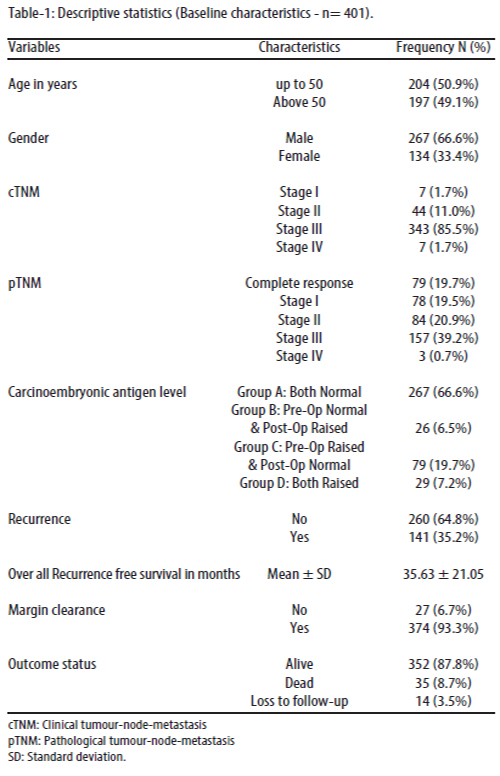 On the basis of TNM staging, most patients were stage III in all four groups followed by stage II (Table-2). 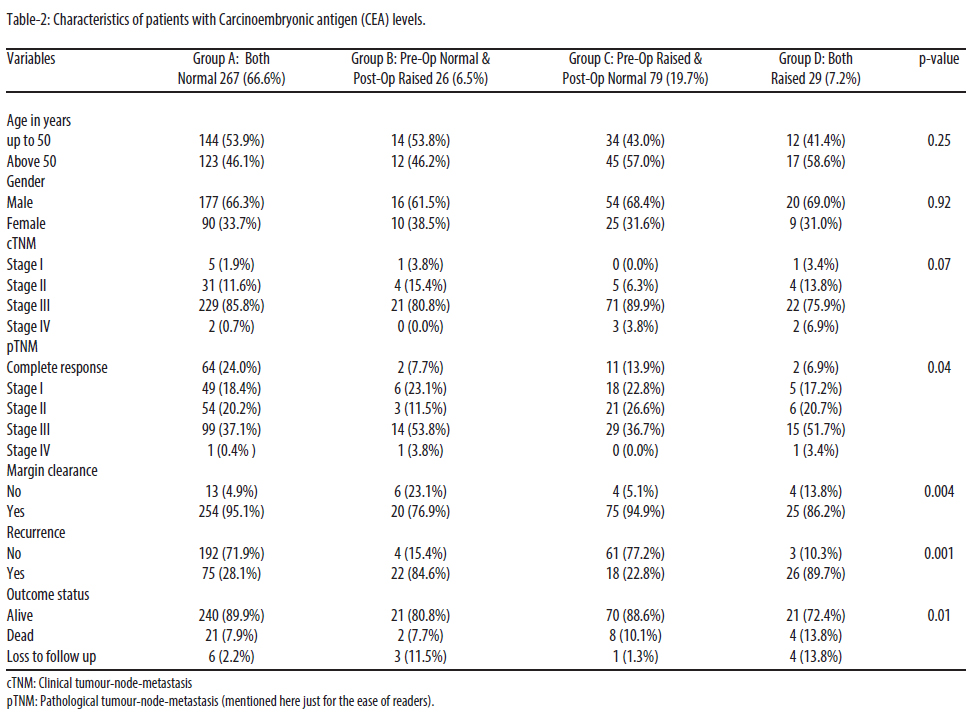 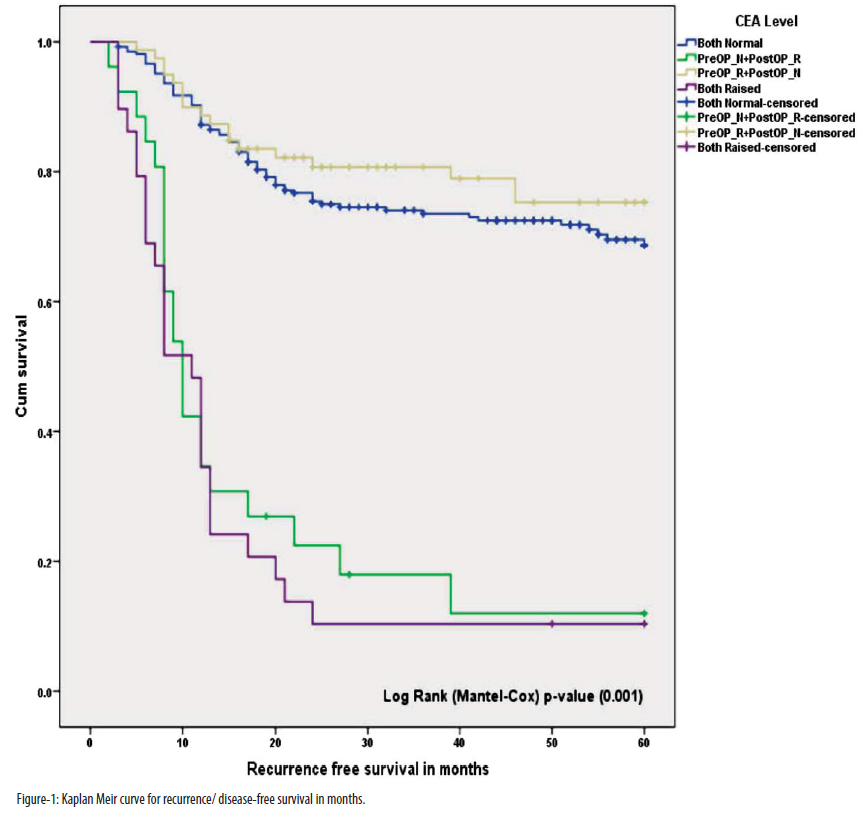 Similarly, OS in groups A and C was much better compared to groups B and D (Figure-2). 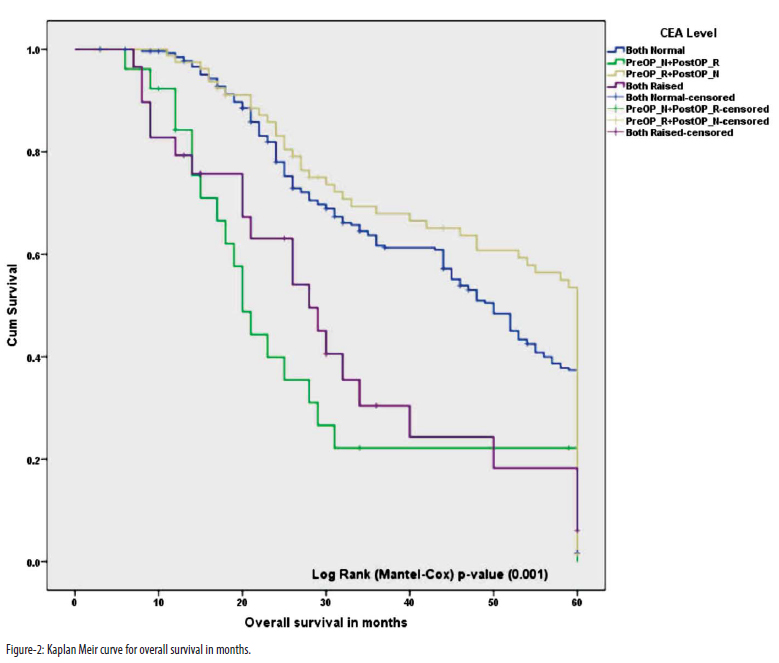 Conflict of Interest: None.
Source of Funding: None.